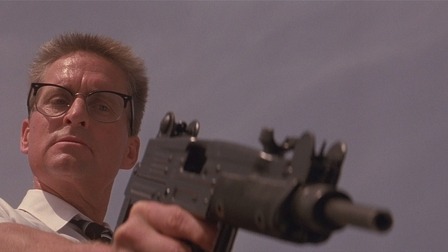 Jon asks: Can a gentleman wear a short sleeve dress shirt to work and still be considered a gentleman? It’s getting hot, so I thought I’d ask. Thanks for any help, Jesse!

The short-sleeved dress shirt is a bit of a fashion anomaly. It became popular in the 1960s among men who had to wear a dress shirt, but didn’t want to and folks who worked at drafting tables – think engineers, draftsmen and other guys in horn-rimmed glasses. Or Michael Douglas in Falling Down. As dress restrictions eased, and the fashion faded, they passed out of vogue for all but their most ardent adherents: Mormon missionaries.

In the past few years, they’ve had a bit of a resurgence as a semi-ironic element of “geek chic.” The new versions are typically worn very slim, without a coat, and often combined with the top-button-buttoned-but-no-tie look.

Can you wear that kind of thing to work? Well, you know better than I. If you’re looking to dress classically well, the answer’s pretty much no. If a trendy casual look’s what you’re after, you’re probably fine, though the style is on the downward slope there.

If you’re looking for an alternative, try a shirt in linen or a linen-cotton blend, an open weave, or simply roll up your sleeves.

Filed Under: Q and Answer, Shirts