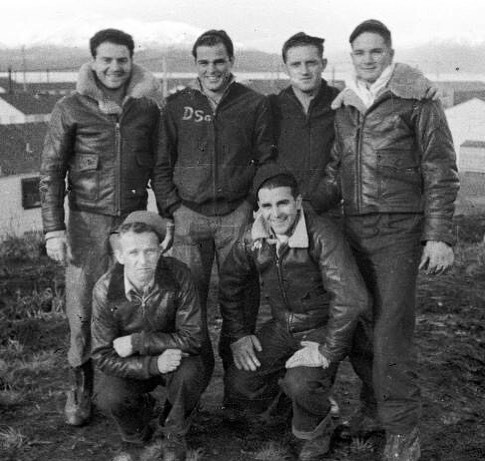 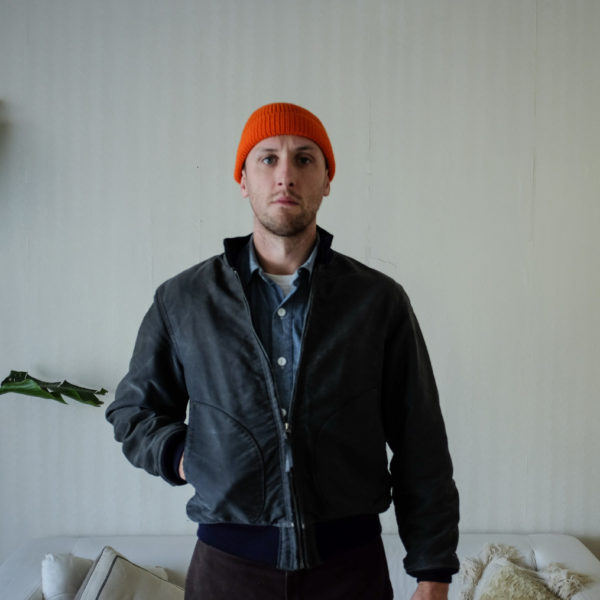 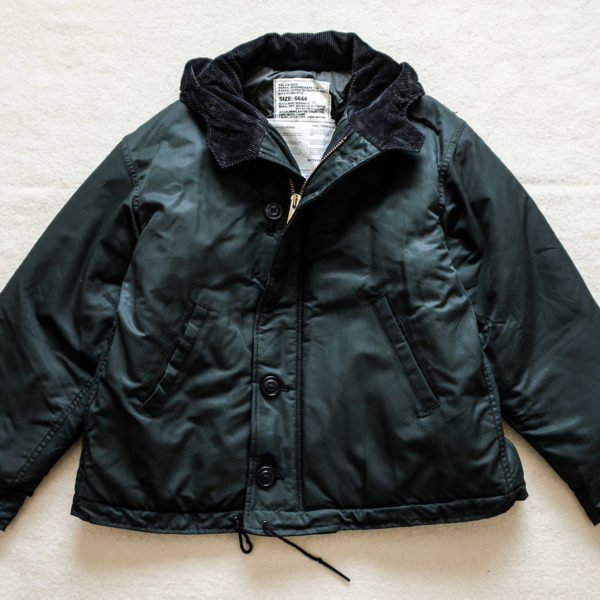 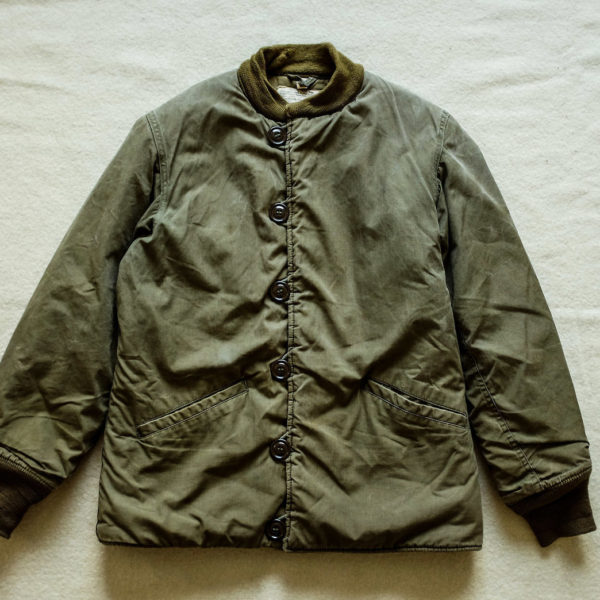 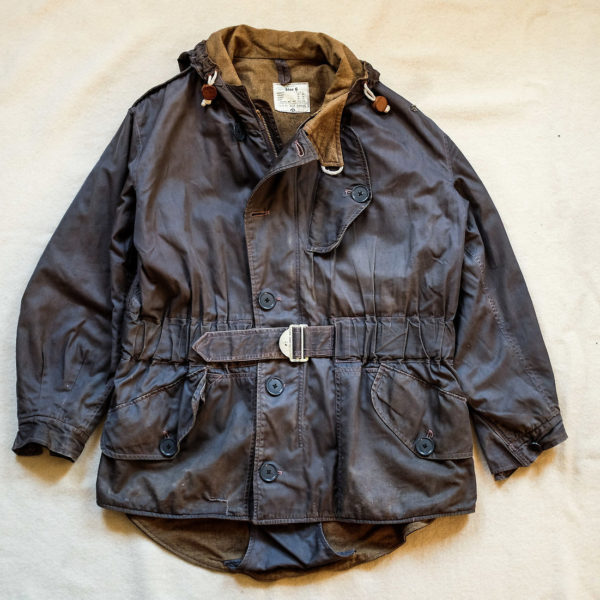 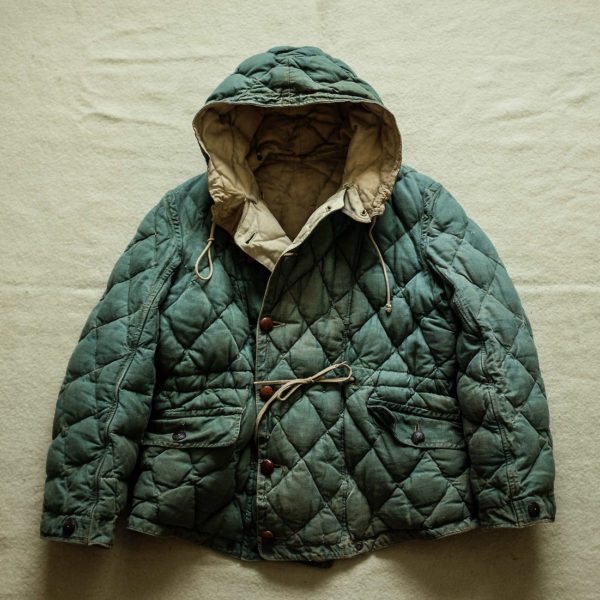 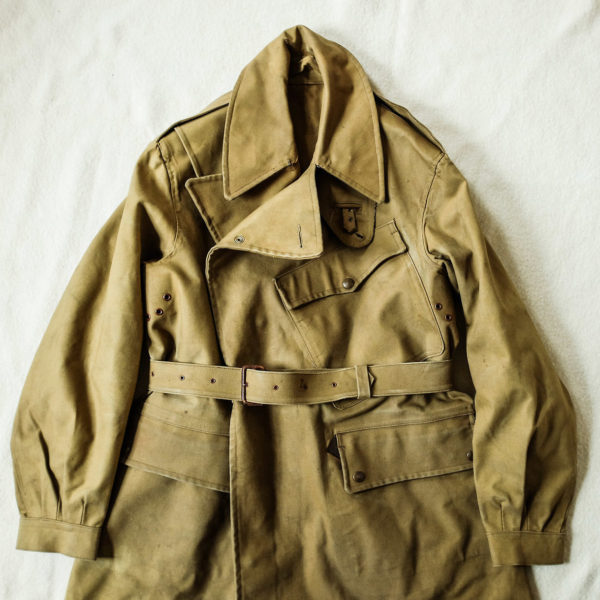 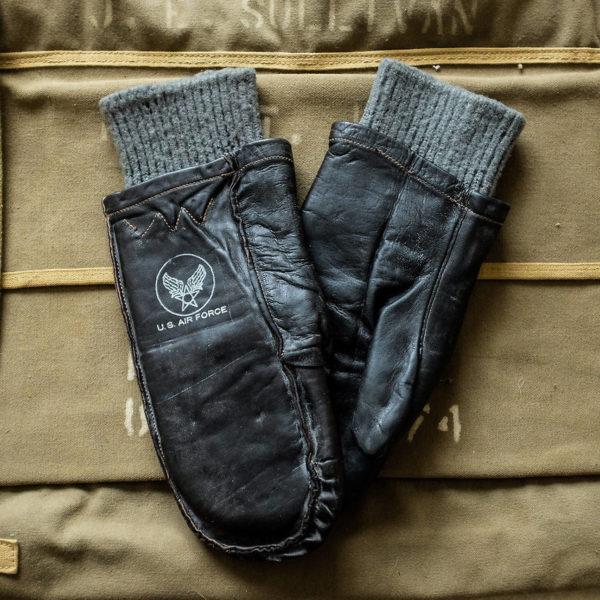 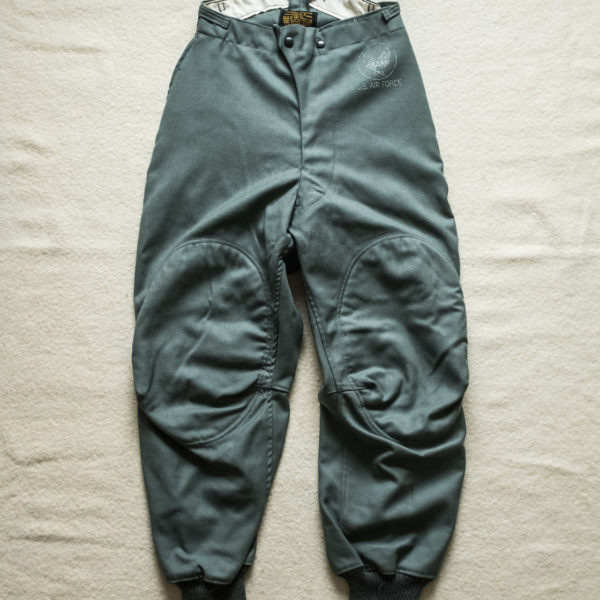 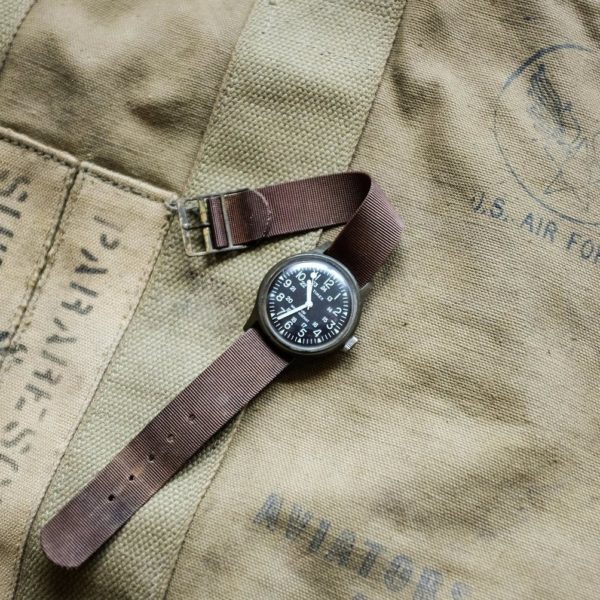 Regular readers of Put This On know that our idea of a fun night might include board games, some kickin’ tunes, then eBay and Etsy searches for deadstock American sportswear or obscure Italian knick knacks. A lot of online vintage sellers (like a lot of mediocre vintage shops) have only a couple of cool things on offer among a bunch of poorly photographed thrift shop dregs. So it’s embarrassingly exciting when you come across a bunch of really interesting, unusual stuff in one place, like we did with Saunders Militaria, which we originally found through Etsy.

Most of us are familiar with the basic, universal military vintage and surplus garments–M-65 jackets, F-2 jackets, fatigue pants, bombers. Saunders, who lives in Nova Scotia, deals in some of those items, but also tends to stock stuff I’ve never seen before, like British Royal Air Force coats in ventile cotton, or Canadian jeep coats, or French army smocks. Although some of it is more antique than vintage, nearly all of it looks wearable in a modern context. Recently, Saunders opened a storefront, which better showcases the wares. We talked about how he got into vintage and underappreciated vintage designs.

First off, how did you get interested in vintage?

I was just always generally obsessed with everything old, especially if it was military related. That probably mixed in with being equally obsessed with punk and industrial music and wanting to look/ dress differently than everyone else naturally led to me haunt thrift and army surplus stores and amass a fair-sized collection of unusual garments.

Later in life the thrill of tracking down especially rare pieces became a passion, and upon discovering through Instagram and “The Vintage Showroom” that there were other weirdos out there who love this stuff, I decided to throw myself into the mix and it is now a full time creative endeavor.

You’re into punk/industrial? What’s your scene?

I still VERY rarely perform/ record experiment music under the name “TORSO” or NACHT LEICHE, and before that was in a doom metal band called VENNT. Those were my areas of interest–noise/ power electronics/ heavy industrial/ black metal/ doom metal.

I’m always surprised how many guys in vintage/menswear have punk/DIY backgrounds. You have mostly military wear on your site but also some adventurewear, but not so much denim or Ivy type stuff that you see a lot on the vintage market.

I definitely have more of an affinity for military history and garments than anything else, followed closely by work wear and arctic/ mountaineering stuff. I suppose I am mostly attracted to the utilitarian designs of military garments. I tend to collect or sell only garments that I am truly passionate about, and not necessarily just things that I know will sell. That is probably why I don’t carry a whole lot of denim jeans. They don’t usually do a whole lot for me, and I have a hard time justifying the prices that some of that stuff goes for.

How did you go from digging in the crates for vintage to selling it online?

I had been buying stuff for myself for ages (since I was a teenager). As for the transition into having an online shop, it started as being a side project to being a full-time carpenter but within a few months got so busy that I was basically working two full time jobs, so I decided to take the leap and finally put my photography degree to use! I relied on Etsy for way too long due to laziness/ ease of use, but have now finally got the official website started and am fazing Etsy out completely.

You have a lot of rare stuff and have pretty specific provenance for the pieces; how did you learn so much about military gear?

I get asked fairly often about where I learned about all this stuff, and I really don’t know. I have always watched a lot of films and documentaries about WW2, as well as photography books. I’m sure a lot of it was pieced together from that. I think more often than not I would research a piece after having already found it and bought it, and I am still by no means an encyclopedia.

I get things wrong and ask for information from other people constantly. It is an ongoing research project. I have never really had anyone around me that was interested in this stuff, so it has definitely been a self guided process.

I know a lot of your stuff is unusual and not cheap, but across military surplus/vintage, what items do you think are the best value for guys? Or underappreciated?

Being in rural Canada, a lot of my finds are old Canadian and sometimes British garments. I think people are slowly starting to take note of how amazing some of the old Canadian military designs are. The Canadian Extreme Cold Weather Parkas are very popular due to their relative affordability and amazingly detailed design. Another that I always try to keep in stock is the Royal Canadian Navy Deck Jacket, which I think is a far superior design to the USN N-1 Deck Jacket, and much more affordable. 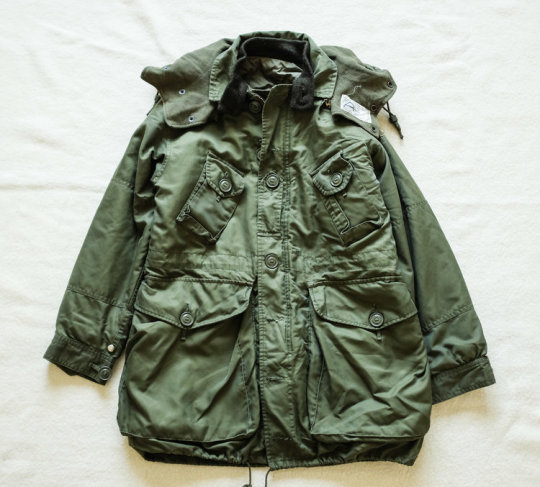 Once you see a few Canadian military garments, you will notice the design details and influence in a huge number of modern brands’ products.

What are some of your best finds?

Those are usually purchased from other collectors/ dealers/ people I know around the world all looking for the gems. My RAF Mountain Rescue Ventile Parka is a holy grail, as well as my WW2 NAF 1168 Khaki Deck Jacket (one of the rarest WW2 pieces there is) to name a few. 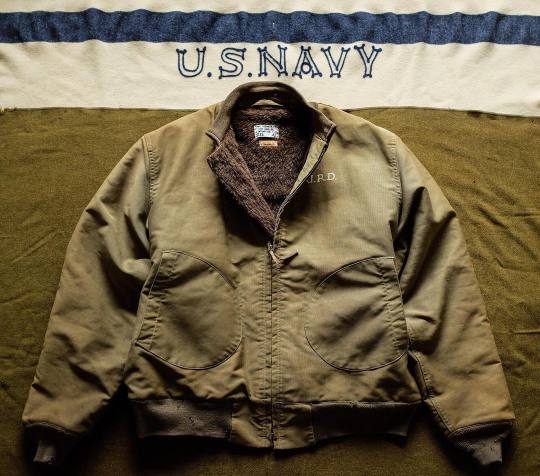 I don’t find a lot of it in Nova Scotia. I get stuff wherever I can. Be that from collectors, antique stores, thrift shops, yard sales, army surplus stores, trading, estate sales, the dark depths of eBay, gun shows, auctions, etc.

Is it tough when you find something rad to put it up for sale rather than wearing it yourself?

As for determining whether or not I will keep something, wear something, or sell something….it is an eternal struggle. My girlfriend could attest that I say “I’m keeping this!” for almost everything I get, but then end up selling it eventually. It’s a whole mental process that has to occur when dealing with items that one is obsessed with.

Having said that, many of the garments are too expensive for me to feel comfortable wearing around, so I keep a relatively simple wardrobe that usually involves $20 dickies trousers, $4 white t-shirts, and 1940’s khaki or chambray work shirts. Once in a while I get brave and throw on a super expensive RAF Parka or something, but then quickly put it back in storage. 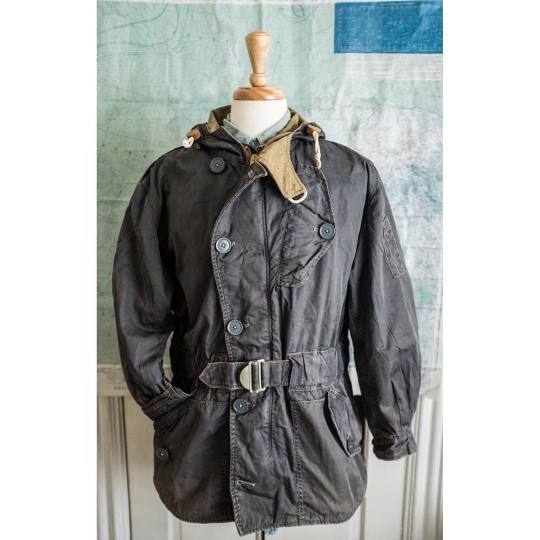 I notice you sometimes list more modern stuff–an Eastman jacket and a Klaxon Howl sweatshirt. Are there any current brands you admire that maybe have some of the same spirit (if not design) of the vintage stuff you like?

I appreciate some of the modern brands out there, for sure. It’s funny that you mention Klaxon Howl. I remember my friend showing me their shop in Toronto years and years ago, and that was the first time I realized that people were making men’s clothing that referenced all the old military/ workwear stuff that I loved. They make fantastic stuff, and Matt [Robinson, owner/designer of Klaxon Howl] helps me out all the time with information/ identifying garments. Other than that, a lot of the modern stuff I sell is from me continually trying and failing to find Buzz Rickson/ Real McCoys stuff that will fit me. I love those Japanese brands, but the sizing is crazy!