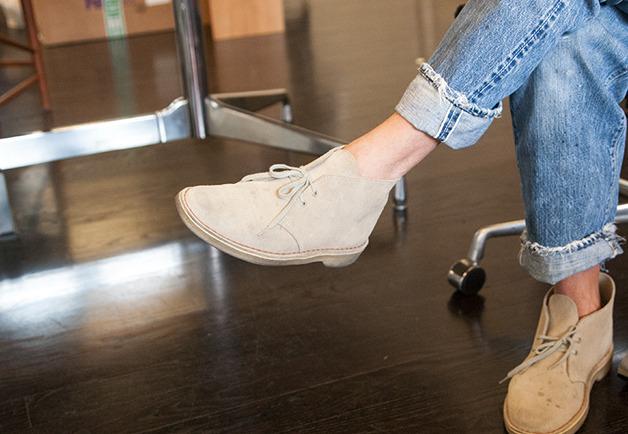 The current ugly footwear movement has roots in comfort footwear: shoes that marketed themselves as valuing orthopedic health over elegance, that promised foot freedom from the confines of narrow lasts and hard leather soles. Before Crocs, we had Birkenstocks, Mephistos, and the original ugly duckling turned cool: Clarks wallabees. Designed in the 1960s, Wallabees even acknowledged their awkwardness in print ads, “To some people, looks are everything. But…” You, the consumer, had more important things to worry about than looks!

In the 60s, Wallabees were a big business boost for Clarks, which adapted the model from a German-made moccasin called the Grasshopper. Clarks had virtually created the market for casual shoes in the 1950s with its desert boots, allegedly adapted from footwear favored by British military, who purchased crepe sole boots in North Africa. Eventually, the desert boot would become a staple of menswear bloggers from Blogspot to Tumblr.

In between, of course, desert boots, wallies, and other Clarks models found favor with groups and subcultures that dominate menswear design moodboards. Desert boots were part of the British mod uniform of the 1960s and 1970s, along with fishtail parkas and sta-prest pants. They’ve been name-dropped for decades in reggae music, and were an essential part of the 1970s Jamaican rude boy fit, adding an unusual tough-guy connotation to shoes that are literally quite soft. 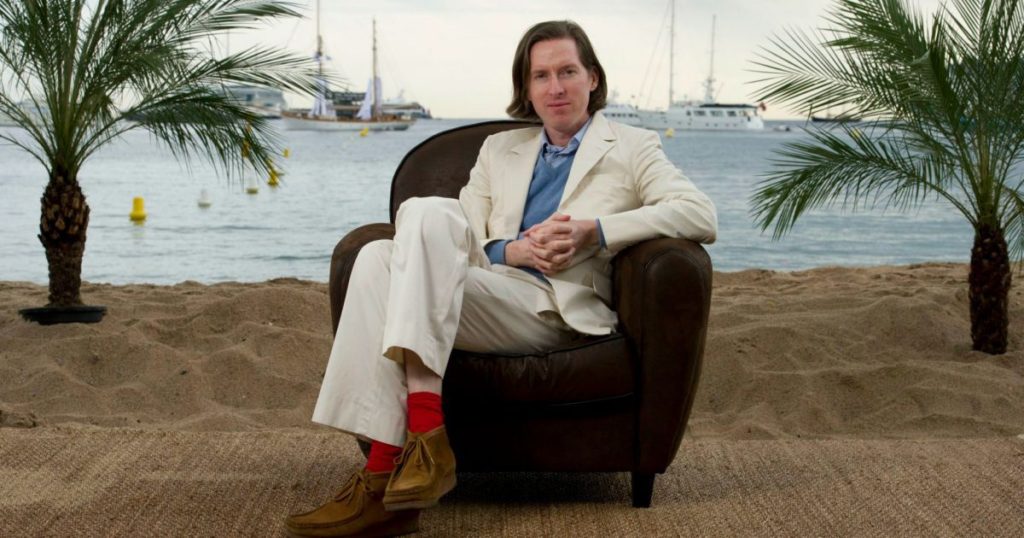 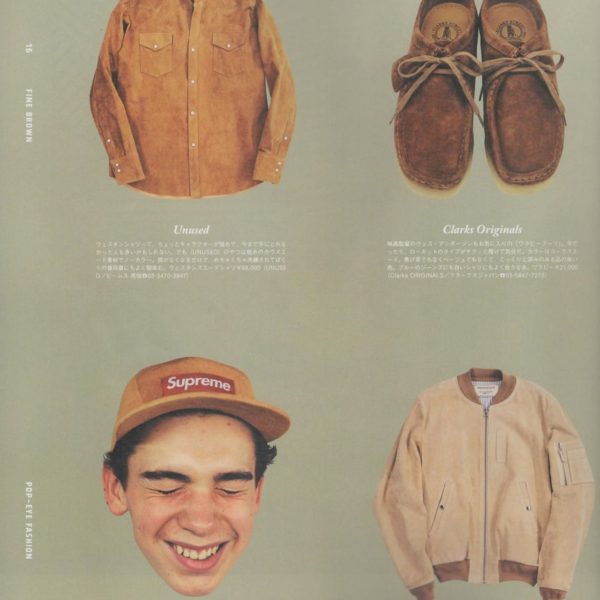 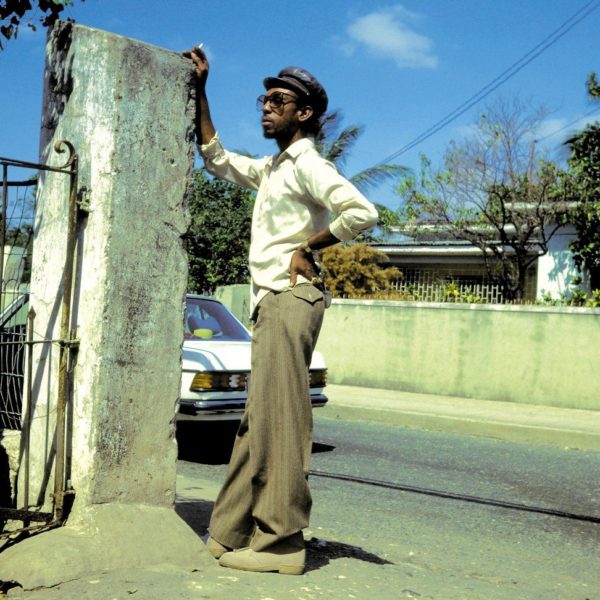 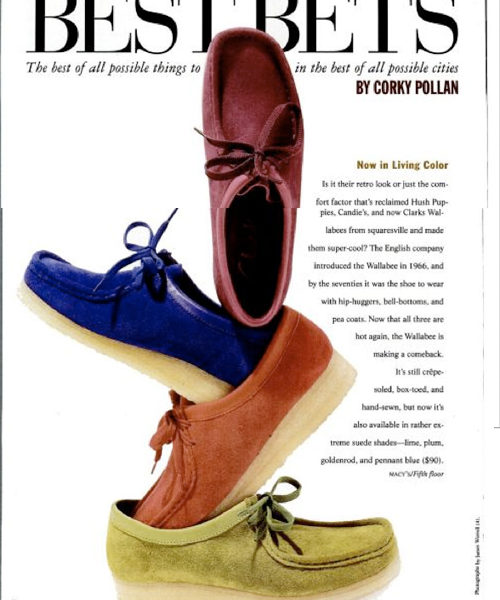 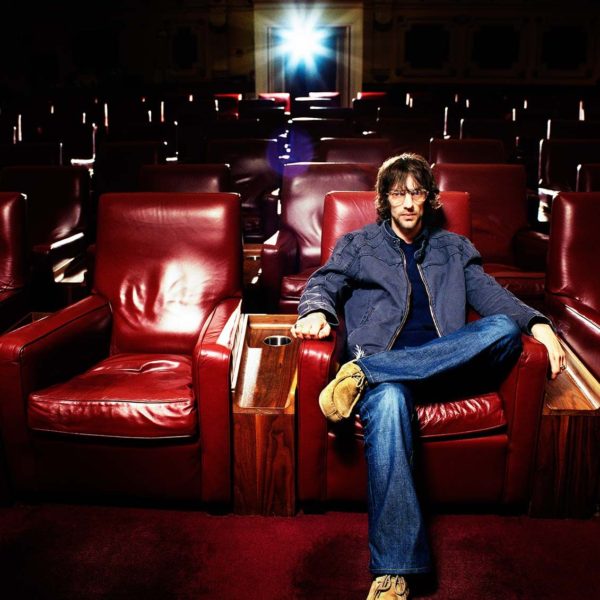 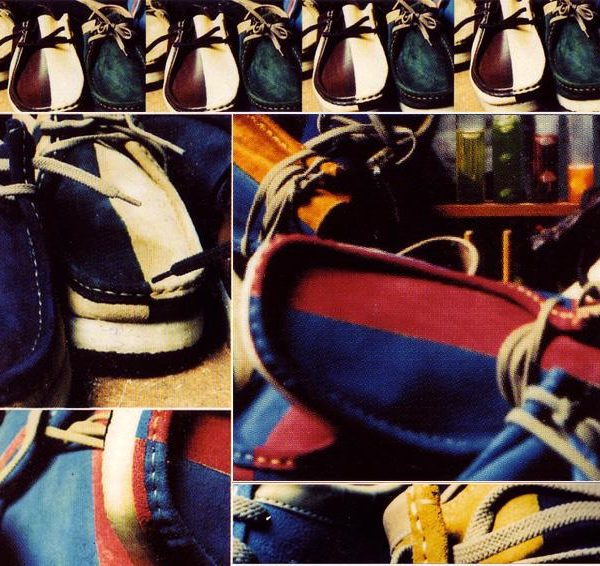 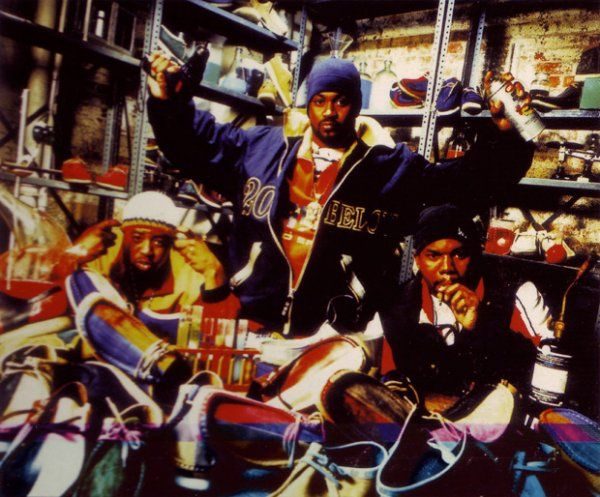 In the 90s, musicians in the British baggy  and Britpop scenes took influence from football casuals and mods, reviving the wallabee in particular. At the same time, in the United States, Ghostface Killah and Wu Tang Clan rocked wallabees–the entire intro to Raekwon’s Glaciers of Ice is about how to custom dye a pair. (Side note: You know Malcom Gladwell’s famous Tipping Point essay about Hush Puppies? Who was wearing Hush Puppies? Hush Puppies are wallabees’ lame cousin.)

So it’s no surprise that the internet is littered with “Clarks are back!” articles dated nearly every year since 2000–like many shoes that have become archetypes, they never really leave. Year to year, the preference for a given model waxes and wanes. There’s not a lot new to say about them at this point, except maybe that it’s sometimes nice to wear something so basic? Clarks are, for the most part, very simple in design, undeniably versatile, and quite comfortable. They look particularly good with “rugged ivy” kind of stuff–slightly hippier than prep, not as tough or blue collar as workwear. Corduroys, sport-derived items like heavy sweats, 60/40 jackets, oxford shirts, that sort of thing.

Below are my favorite Clarks models, all of which fall under their “Originals” line–they make a lot of undistinguished shoes outside of this retro-oriented brand. 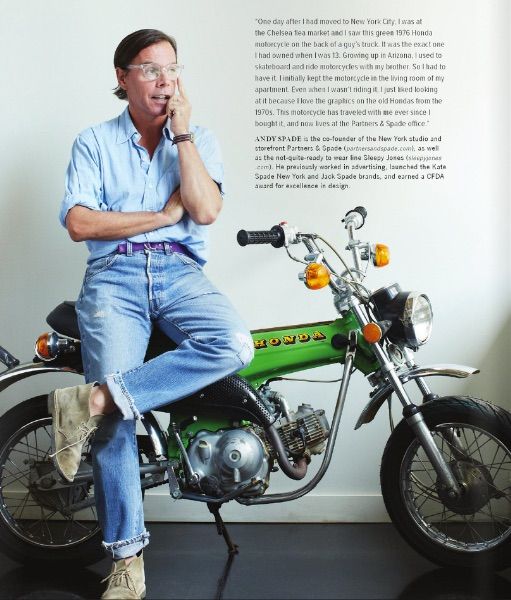 Desert boots are really as simple as shoes get. Wrap some leather around your foot and attach it to a rubber sole with a heel. They’re like cartoon shoes. Maybe because we don’t always want our shoes to speak loudly, Clarks are a good fit for almost any casual wardrobe, and a great entry point for guys just getting into nicer shoes. I prefer my desert boots, like most of my Clarks, in sand suede, which looks great with blue denim and any muted color cotton pants (just don’t match the pants to the shoes too closely). It helps that desert boots look great new and still look good thrashed and stained, in my opinion.

Also consider: Astorflex desert boots, which are similar and similarly priced but to me look and feel a tad nicer out of the box. 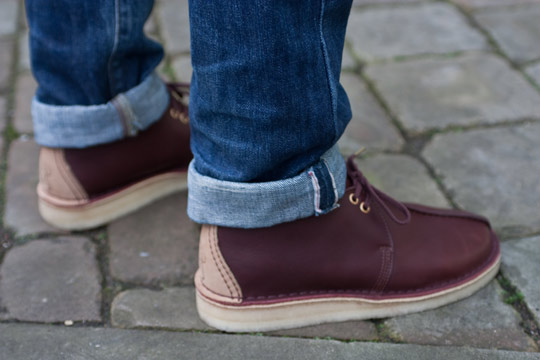 Desert treks are another chukka-height boot but add a seam down the center of the toe and a heel cap–plus a wedge rather than heeled crepe sole. Treks have always seemed to have more of a hippie vibe to me than desert boots, which are pretty anonymous/vibe-free on their own. 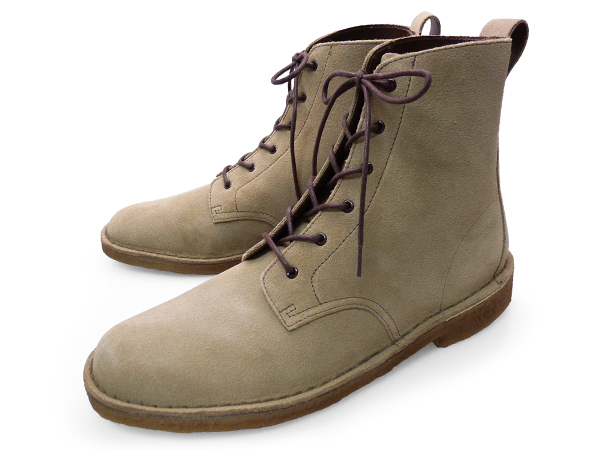 The Mali is somewhere between a desert boot and a more traditional workboot, like Doc Martens. It ditches the distinctive vamp-to-quarter transition of chukkas in favor of a more traditional blucher shape. These have a little more personality than desert boots but aren’t quite as carefree, just by virtue of the lacing. 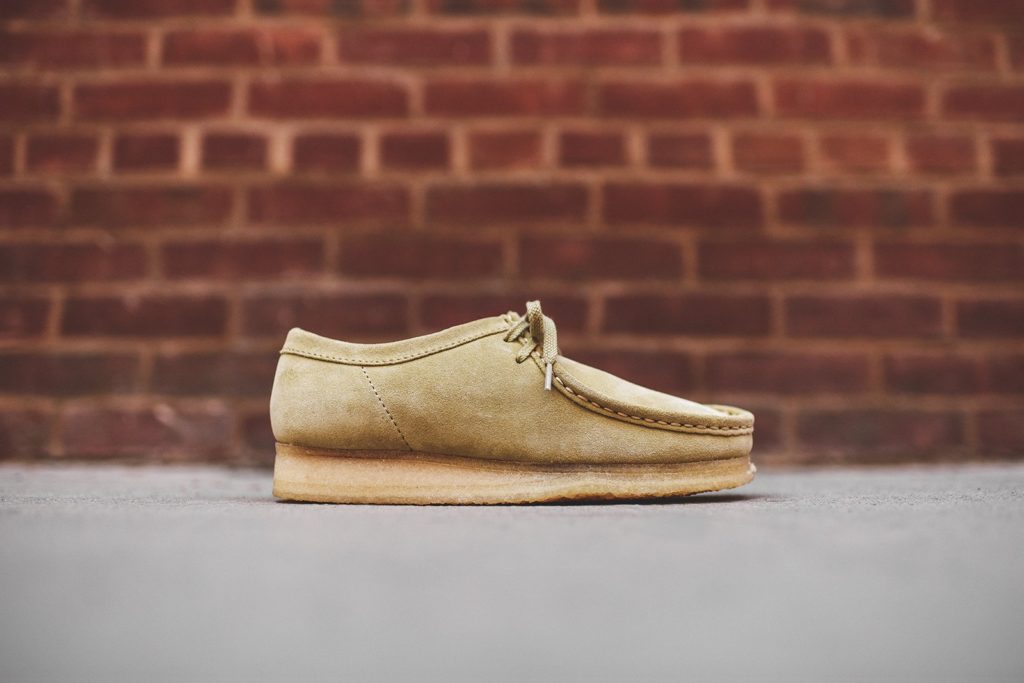 If I didn’t have any Clarks and wanted to buy a pair right now, I’d go with lo wallabees. They’re really easy to wear and, although wallabees are quite common, a little more distinctive than desert boots.

Also consider: Padmore and Barnes P204. Wallabees were originally made for Clarks by an Irish company called Padmore and Barnes. (If you dig up vintage bees you’ll find the insole stamped “Made in Republic of Ireland.”) P+B started up again a few years ago, and makes some nice shoes in the same essential styles as Clarks at a slightly higher price. All the modern P+Bs I’ve seen are made in Portugal. 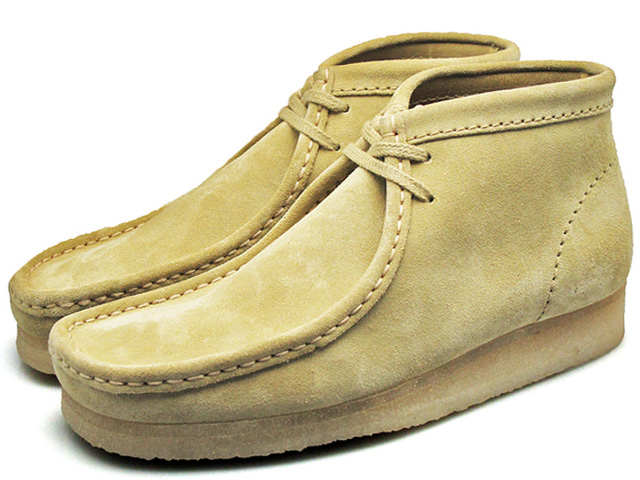 Wallabee boots lace above the ankle, and despite the ugliness, there’s something pleasing about the balance of the tongue and the body of the shoe in a moccasin like this. Wallabee boots seem like the right shoe for an October stroll through a nice college town. Do those still exist? 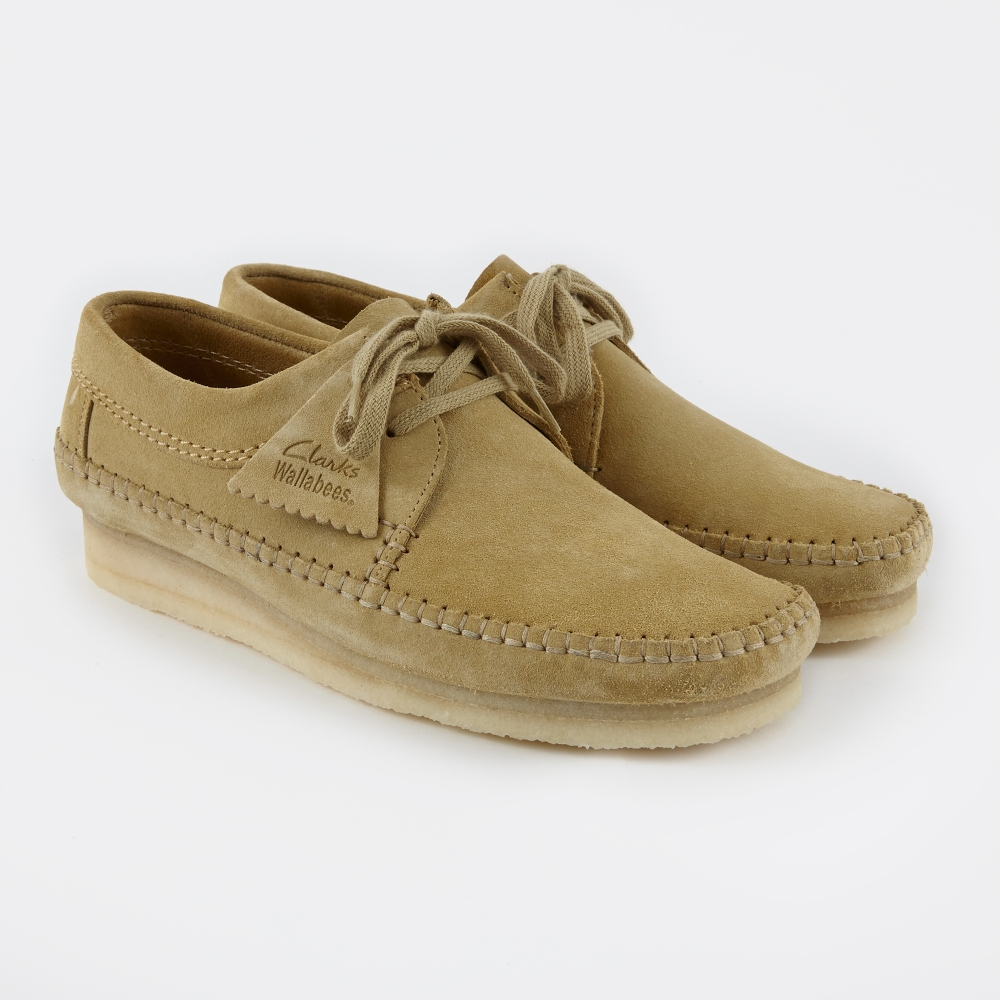 The first pair of Clarks I bought back in the 00s was a pair of weavers, and I wore them to death with blue jenas and olive drab jackets, which hey I still wear a lot. Weavers have a more subtle silhouette than wallabees because they don’t wrap the vamp around the leather that wraps the foot, but rather stitch the pieces together flush. Weavers also come in an ankle boot. 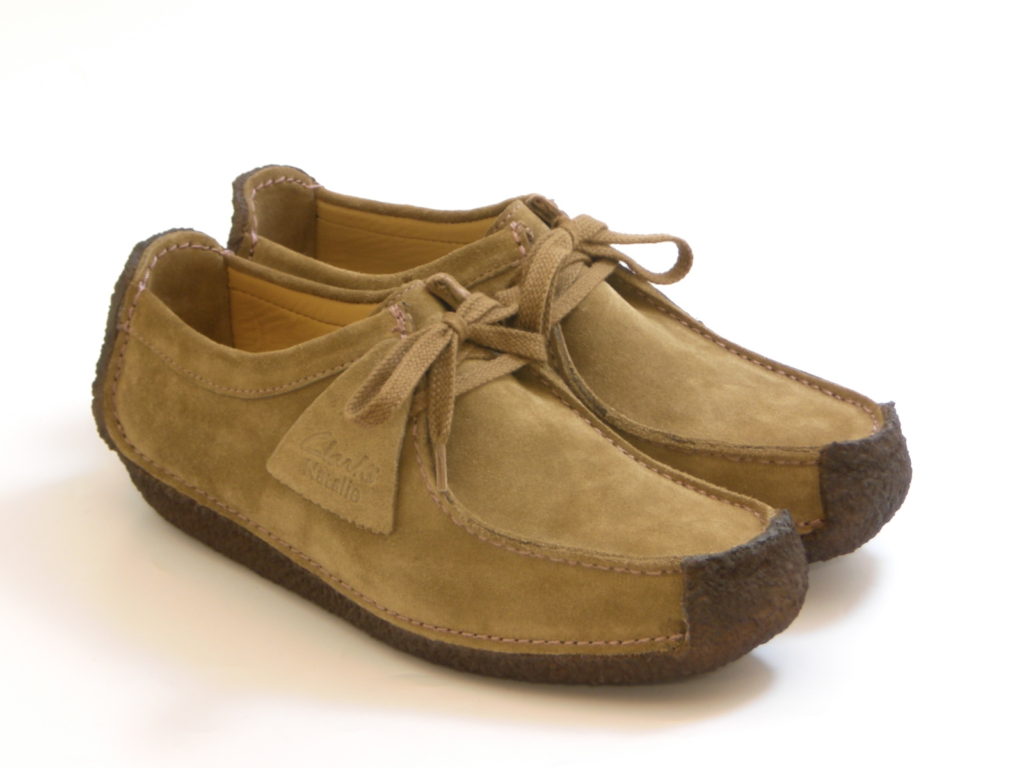 The Natalie model is somewhere in between, with a pinched/gathered moccasin style toe (like an American penny loafer, sort of) and crepe that wraps up the toe and heel (to what functional purpose is unclear). They’re goofy as hell, but not in a bad way. Designer Christophe Lemaire recently made a boot in the Natalie style (called Redlands); they may be due for some more attention.