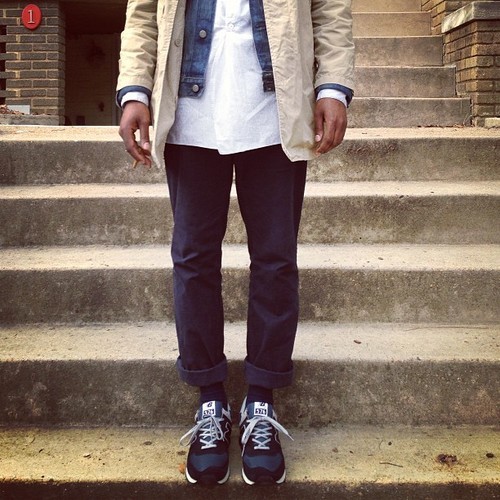 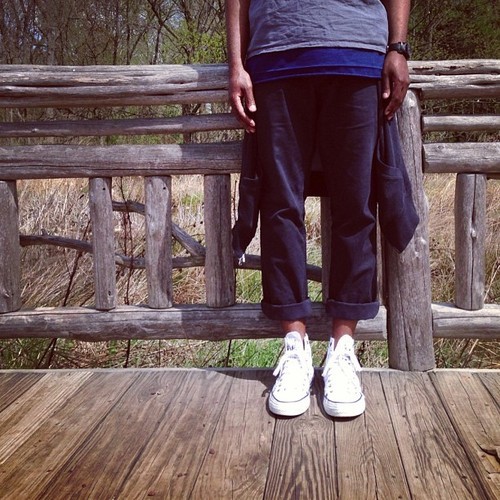 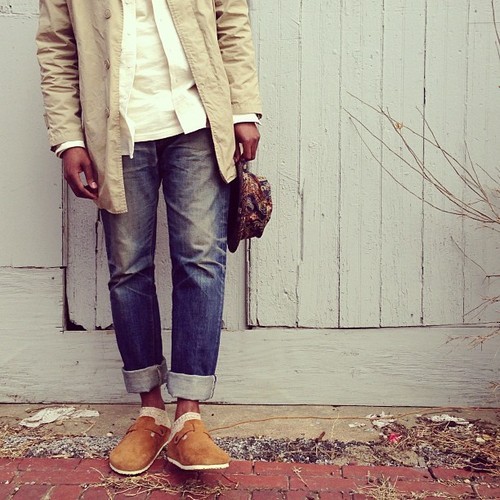 The ideal men’s casual ensemble, as etched into stone tablets handed down to Steve McQueen by a god resembling On the Waterfront-era Marlon Brando, involves straight or slightly tapered pants worn a little below the waist with a slight break at the hem, sneakers or leather boots, a shirt or tshirt either tucked or untucked and ending just below the beltline, and a jacket that’s just a little longer. These are the commandments of flattering proportions in layering.

But the geometry of good layering is more complicated than that. Adrian in DC’s photos often show off a sophisticated sense of proportion and length that just slightly subverts the military/sportswear styles from which most of our casual dressing norms derive. In the top photo, Adrian’s midlayer denim is shorter than his shirt, and not just a little bit. In the lower left, he layers a shorter jersey tee over a longer one. The lower right photo’s layers are not as unusual, but maintain the “A”-shaped silhouette that literally inverts the traditional, shoulder-emphasizing “V” of most western men’s clothing. Making sure it doesn’t look like an accident is key—note Adrian’s shirt sleeve length is precise and the colors he’s wearing are basic but complementary, not mismatched or sloppy. It’s not generally advisable to mimic directly a brand’s lookbook or runway show, which after all are primarily marketing tools rather than how-to guides, but Engineered Garments fall 2011 book and Siki Im’s work were some of the places I initially saw layering like this and thought it looked good—both lines use a lot of sportswear elements but aren’t afraid of aprons or tunics as layers.

I don’t yet have any recommendations for a best value tunic.