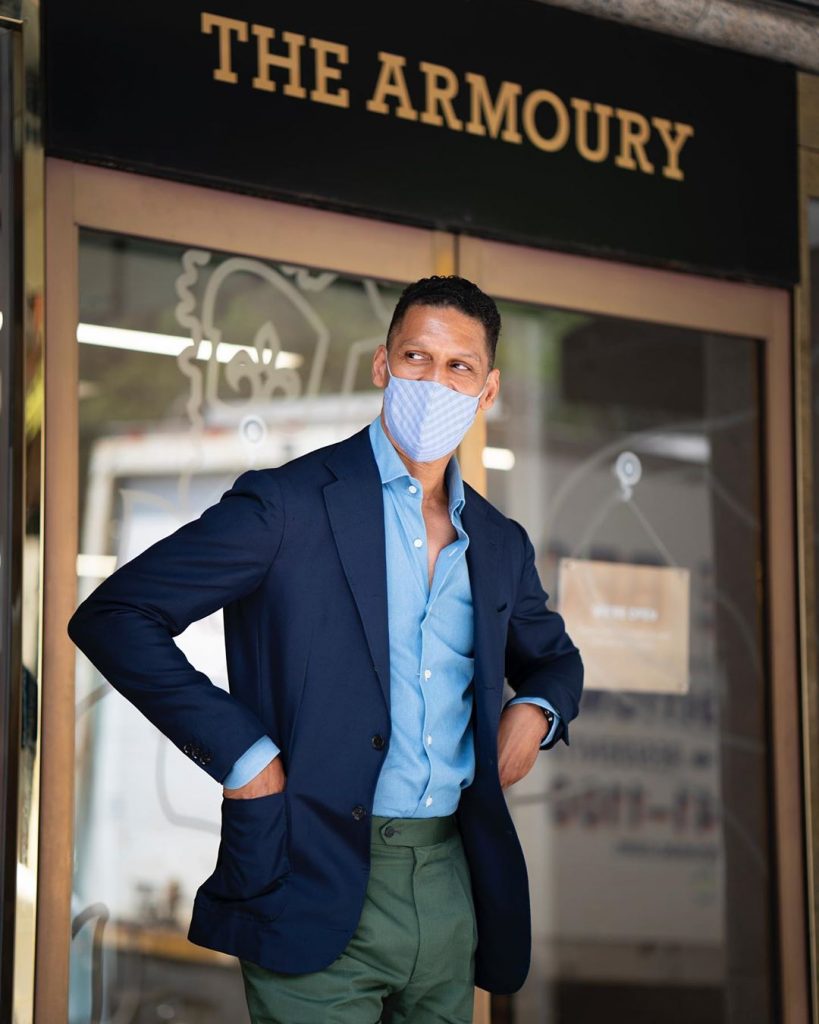 Trend-forecasters and Twitter dilettantes are divided about the future of men’s fashion. On one side are the comfy boys who have filled their closets with a rainbow of tracksuits. (They think they’re channeling Armie Hammer, but wind up looking like Pauly Walnuts.) When a cure for COVID is discovered, these guys are betting that the months or years spent in elasticated garments will forever change how men dress.

On the other side of the debate are the guys who can’t wait to “really start dressin,’” and whose time stuck indoors, unable to bust out their favorite pieces of tailoring, has only spurred them to want to dress up even more. And it is this group of men that interests me, men who — despite the grim economic prognostications and unlikeness of attending a formal gathering anytime soon — are not only buying something nice off the rack but also choosing to get something custom made just for them. And now that New York has entered Phase 3 of its reopening plan, these guys can finally pull the trigger on whatever they’ve been coveting. So I decided to call up and visit a few businesses around town to find out who was buying and why.

I had to start with the ur-brand of #menswear, so I called up Mark Cho, founder of The Armoury. With both New York stores open again, Cho told me customers are now buying in person, but the demand for suiting is still low. To bring in more customers, the brand recently announced a temporary (and unheard of) 20% reduction on new tailoring from Ring Jacket. “We feel like frankly, the world is going to be a very competitive place,” said Cho. “But I wanted to try to stick to the idea that the Armoury never goes on sale. This is why when we did cut the prices, we contacted everybody who bought a jacket in the past three months and gave them a credit for the difference.”

Since reopening, safety has been Cho’s top priority, with temperature scanners to check customers as they enter the store, masks and hand sanitizer at the ready, and special appointment-only hours for those who wish to shop in isolation. Once a destination for globe-trotting custom tailors, the Armoury shop has begun offering virtual appointments where sales assistants measure and fit a client at the direction of a master tailor in Italy or Japan via Zoom.

Since travel is still limited, the shops have focused on their local customers in TriBeCa and the Upper East Side: finance bros who haven’t been particularly hard hit by COVID-19. (The stock market, propped up by the Fed, has bounced back while the real economy flounders.) The problem is that most of these customers decamped to the Hamptons or upstate months ago. “We definitely had a surge when we opened up again, people were just glad to see us,” said Cho. “But I do think a lot of our customers are not in town.” Still, he plans to keep both locations open. “We’ll burn a bit of cash trying to keep things open despite things being slow, but we are in it for the long term.”

And for guys who are wanting to cop, but unable or unwilling to go to a store in person, I spoke with a representative from the custom suit company Alton Lane. The brand has long incorporated technology into their pitch to clients, using body-scanning and a trove of customer data to create garments that are likely to fit without the hassle (or danger) of an in-person encounter. Based in New York, their doors are open again, but most of their customers seem to prefer shopping online.

While the brand could not share exact data with me, they were able to describe general changes in their customers’ orders, including a 50% uptick in deconstructed blazers, and a strong demand for shirting that looked professional on video calls. Their customer base has historically skewed younger, but now they are finding that more men of all ages are buying their clothes, perhaps signaling a shift from “early adopters” to a broader audience.

Finally, I spoke with Jake Mueser, proprietor of the custom clothier, J. Mueser, located on Christopher Street in the West Village. Normally, clients enter a small storefront, but given the danger of cramped conditions, they’ve moved their operations to their airier showroom across the street. The brand has long been an “if you know, you know” spot, frequented by guys who are already into clothes for their own sake, rather than guys who only buy suits for a work uniform. Still, business has been disrupted.

“A lot of what we’re working on tends to be event-driven,” said Mueser. “We’ve seen a lot of weddings canceled, but we’ve also seen a lot of weddings pivot. Clients are saying ‘It was going to be black tie, but now we’re getting married at our beach house.’” They’re opting for linen instead of gaberdine. And for the fall, Mueser is pushing plush knits and luxurious cashmeres to make working from home a bit more bearable. “I think a lot of people at the executive level are not going to be in the office,” he admitted. “So we’re suggesting things that are a bit comfier, that you want to indulge in.”

Ultimately, buying a custom piece of clothing is not an impulse purchase, but a conscious decision, a kind of bet on the future. You’re betting your body isn’t going to change too much, that you will still like whatever you’ve commissioned after the months it takes to actually be made, and now you’re betting that there will be a future in which to wear it. For some, this future is impossible to imagine, but others are getting on with life. There will still be occasions to dress up for. In the meantime, if you have the money, your local shops could use your help to weather the storm. After spending some time talking with the boys at J. Mueser, I find myself tempted to commission something slouchy, cool, and a bit cozy. Perhaps with a drawstring waist?