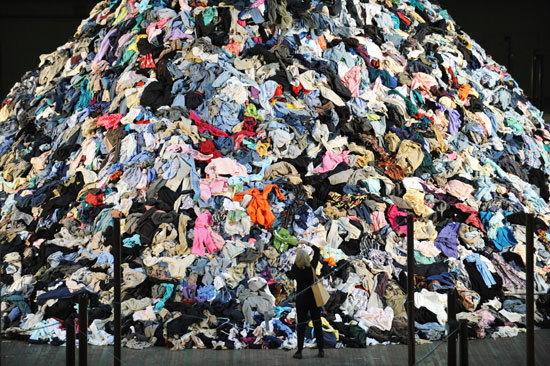 In the past week, I’ve been reading The Craftsman by Richard Sennett, a wonderful book that Bruce Boyer recommended to me some time ago. In one chapter, Sennett talks about various epochs when the volume of material goods available to Westerners expanded dramatically.

In the Renaissance, trade with non-Europeans swelled the number of goods at people’s disposal. Netherlands, Britain, and France had an unprecedented demand for new possessions (and subsequently the furniture that was needed to display those possessions). As material abundance seeped downward, it extended to ordinary matters such as people having more than a single pair of shoes to wear and different clothes for different seasons. Victorian England was similarly prosperous. Here, the advancement of industrialization made it possible for the British to enjoy more clothes, domestic utensils, and books.

In each of these periods, Europeans felt both wonder and anxiety for their new material abundance. People worried about how to use goods well, what abundance might be for, and how not to be spoiled by possessions. Human virtues such as restraint and simplicity came to the fore, and some wondered whether the sheer quantity of objects around them would dull their senses.

One can see a reflection of these periods in our current state. Despite all of the economic problems we may have, most Westerners (and many in the East) still live in a consumer paradise. However, I think we’ve struggled to properly manage the issues that have come out of that. Take, for example, clothing, which has largely become an industry of “fast fashion.” Clothing is made cheaper and cheaper, and new items are introduced not just on a seasonal basis, but also multiple times throughout a season.

The production of cheap clothing has led us to devalue clothes, both in what we’re willing to pay and how we treat them. The mere availability of $15 button-up shirts makes people cringe at the idea of a $75 shirt, even if it’s made from better materials and done with better stitching. Give someone a closet full of $15 shirts, and they’ll have no incentive to really learn how to take care of what they own.

The availability of cheap clothing has also made voracious appetites possible. People these days are constantly buying new clothes, and this introduces a level of waste that’s only dreamed of in scarcity societies. Even cheap, poorly made garments – which are only meant to last two or three years – are thrown out long before the end of their practical life.

One explanation is that people these days are more aroused by anticipation than actual operation. Getting the latest thing is more important than making good use of what you have, and being so easily able to consume new and cheap things makes this quest an endless activity. Consequently, people have much more than they need, but nothing that they truly satisfies them. This triggers a vicious feedback loop – because they’re not satisfied, they go out and buy more and more, but since they consume so much, their limited budget forces them to only buy other unsatisfying things.

It also sets an utterly bizarre modern mindframe. In what other era have people thought they need to fill every “gap” in their closet? “I have wool trousers in glen plaid, solids, window panes, and houndstooth, all in navy, brown, and grey, but none in olive, so I have to fill that gap.”  Granted, I write about things such as “Five Casual Trousers for Fall,” but this doesn’t mean you have to get every one. I’m giving you options, not a shopping list.

In previous epochs when Westerners enjoyed such material abundance, they reflected back on what it meant for society and themselves as individuals. We’ve done the same; there’s all sorts of neo-Ruskinian attitudes these days. Everyone is talking about craftsmanship and returning to a more “humanist” view of production.

The fundamental problem, though, is still present: we expect to accumulate an unreasonable amount of clothes, and we want to do it within a year, if not a season. People are constantly hunting for “deals” at “fast fashion” stores such as Zara, buying things without any real long-term impression of what they need, and spending whatever is within their immediate disposable income. That kind of practice will lead to an enormous wardrobe, but of things they’ll never quite like, so they’ll never really wear.

It would be better, I think, to have a more controlled appetite. Make a prioritized list of the staples you need, and don’t get side tracked into impulse buys. Then, find out how to really discern quality in clothing, and buy what is truly, truly worthwhile. Instead of owning a hundred mediocre ties, thinking that they were a “bargain,” buy ten quality ones in your most basic designs. Instead of having twenty mediocre shoes, buy three excellent pairs, and use the time that you would otherwise spend on shopping to take care of what you have. Put in shoe trees, apply leather conditioner, and take the time to buff and polish.

Of course, if you have the means to accumulate nothing but the best, then more power to you. If you’re of limited means, however, you would do better by really taking the time to understand how to discern quality and prioritize that over price. If you can’t afford it today, then scrimp and save for a while until you can. If you take a long view – that you will need five to seven years to accumulate a decent wardrobe – and don’t expect to need fifty trousers in every single pattern and color, this is quite achievable. That is, after all, how most people built wardrobes in the past.