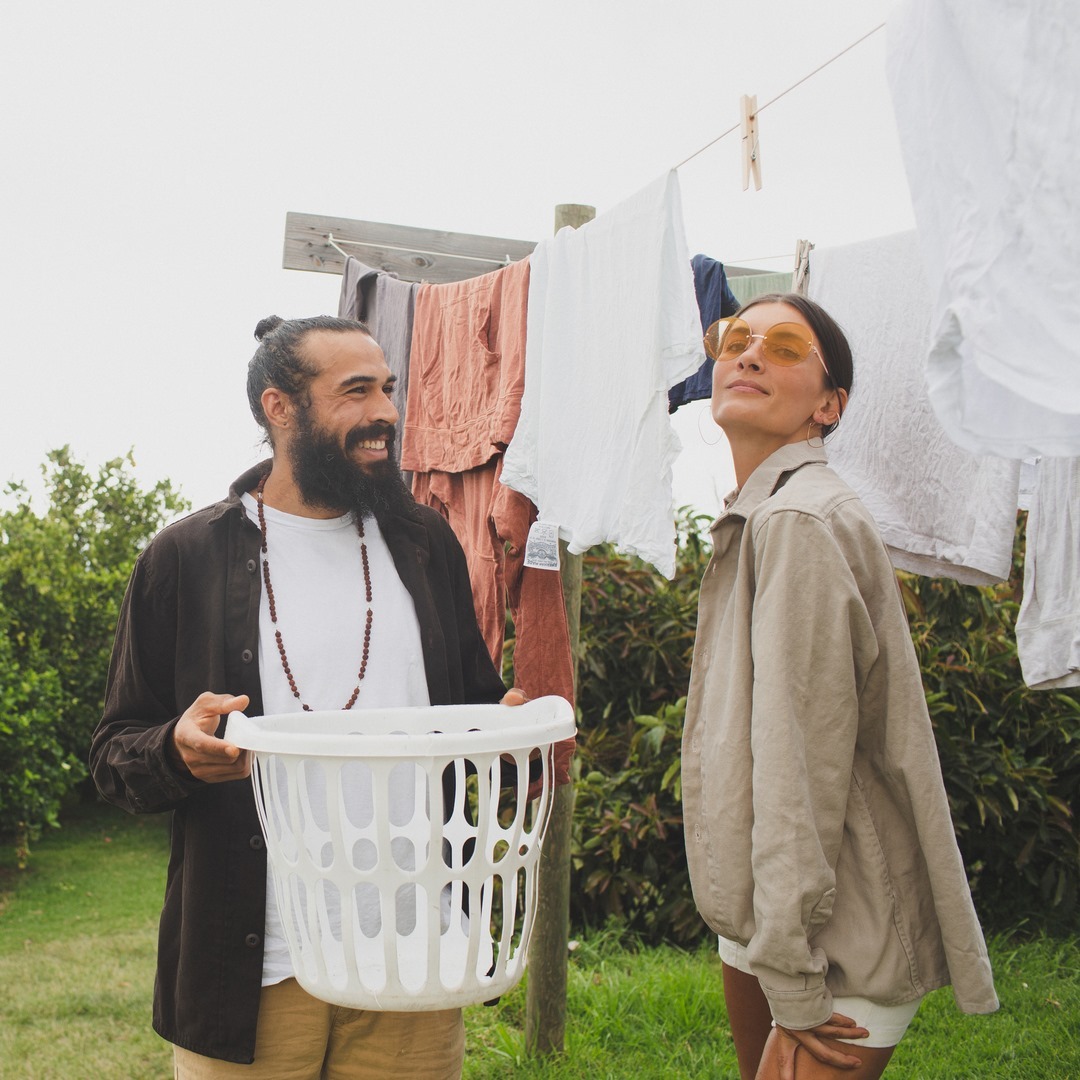 When you imagine somebody wearing hemp clothing, what do you picture in your mind? An old hippie selling astral projection guide books in the mall parking lot? A substitute teacher wearing a pair of scruffy Timberland slip-ons? Perhaps a white guy with dreadlocks setting a trashcan on fire at Woodstock ’99? For years, hemp has gotten a bad rap in fashion because of its association with a certain ultra-crunchy milieu. What you may not realize is that much has changed for this humble plant in the intervening decades. It’s time for even the hemp skeptics to give it a second chance.

For 50,000 years, hemp, aka cannabis sativa, has been cultivated around the world to make clothing (along with paper, rope, and much else). The material comes from the plant’s stalk fibers, which are stripped, retted, and spun, similar to how linen is processed. Nothing about hemp is psychoactive, and industrial hemp’s negligible THC content makes the plant a distant cousin of marijuana. But because of racist, archaic US drug policies (which were created to discriminate against Mexican immigrants and African-Americans), hemp has been illegal to grow in the United States for most of the 20th century–until 2018 legalized its production.

Now that hemp is legal to grow in America–hooray!–we find ourselves amid a huge hemp boom, with farmers across the country eager to ride the green wave. However, most of the attention paid to this wonder plant has been around cannabinoids, those other chemicals in cannabis used to treat anxiety, pain, nausea, and bad vibes. Now that the CBD market is perhaps reaching saturation, some hemp growers are looking for other ways to turn their crops into cash, and hemp’s applications in textiles may be next. 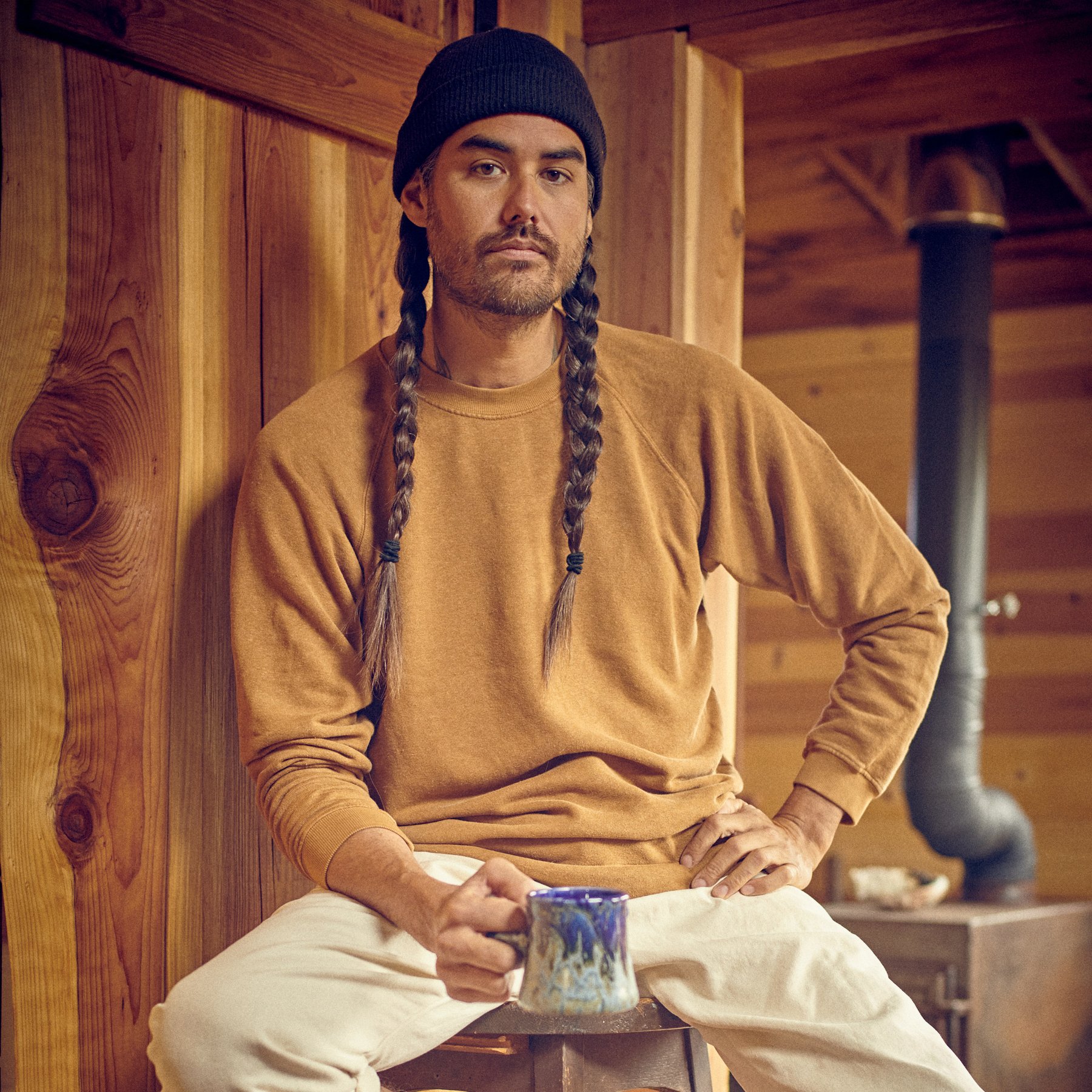 On its own, hemp is a hard-wearing material whose extra long and durable fibers make it ideal for ropes, canvas, and other heavy-duty textiles. But hemp can also be amazingly soft, especially when blended with cotton or other fibers. Rob Jungmann has been advocating for hemp in fashion since the early 1990s, but in the past few years, he has perfected the art of blending hemp to create classic casual California looks for Jungmaven. The brand’s raglan sweatshirts, loose terry cloth shorts, and even linens and towels are all made from 100 percent hemp or hemp blends, and cut and sewn in Los Angeles. Jungmaven’s best seller is their classic Jung T, made from 55 percent hemp, 45 percent organic cotton–so sturdy it makes Hanes’ beefy T look like tofu wellington.

Rob Jungmann came to hemp the way others come to god. An Arizona native who had moved to Pacific Northwest for college, he fell in love with the area’s forests, only to become horrified at the clear cutting of local wilderness. “A professor of mine at university was like, ‘We could stop cutting down all the old-growth forests in Washington state if we were growing industrial hemp,'” Jungmann recalled. Since that college lecture decades ago, he has made it his mission to spread the gospel of hemp, and now, finally, other brands interested in using more sustainable materials are starting to catch on. Unlike cotton, which requires enormous amounts of fertilizers and pesticides to raise on an industrial scale, Jungmann explained that hemp requires no pesticides or fertilizers. Better yet, it grows almost as quickly as bamboo, sequesters carbon, and can be used as a rotation crop to restore soil rather than deplete it. Jungmann’s ultimate goal is to redefine fashion by getting a hemp T-shirt on the back of every American, which despite his best efforts, is a few years from being realized.

Outdoor brands long interested in sustainability, like Patagonia and REI, have been developing hemp products for years, but the fiber is also attracting increased interest from more style-oriented brands. One newcomer, Tact & Stone, is blending hemp with organic cotton to create a core line of surprisingly silky T-shirts. “It feels like it continues to get better with age,” said Tact & Stone Co-founder Landon Nash. “It almost forms to your body, like linen.” Another advantage of hemp: while you’re breaking in your clothes, you don’t have to wash them as often as pure cotton. Because of hemp’s antimicrobial properties, garments made from the fiber require less laundering, which further reduces their environmental impact. And of course, should you wear your hemp T beyond repair, Tact & Stone will take it back to be recycled instead of landfilled. 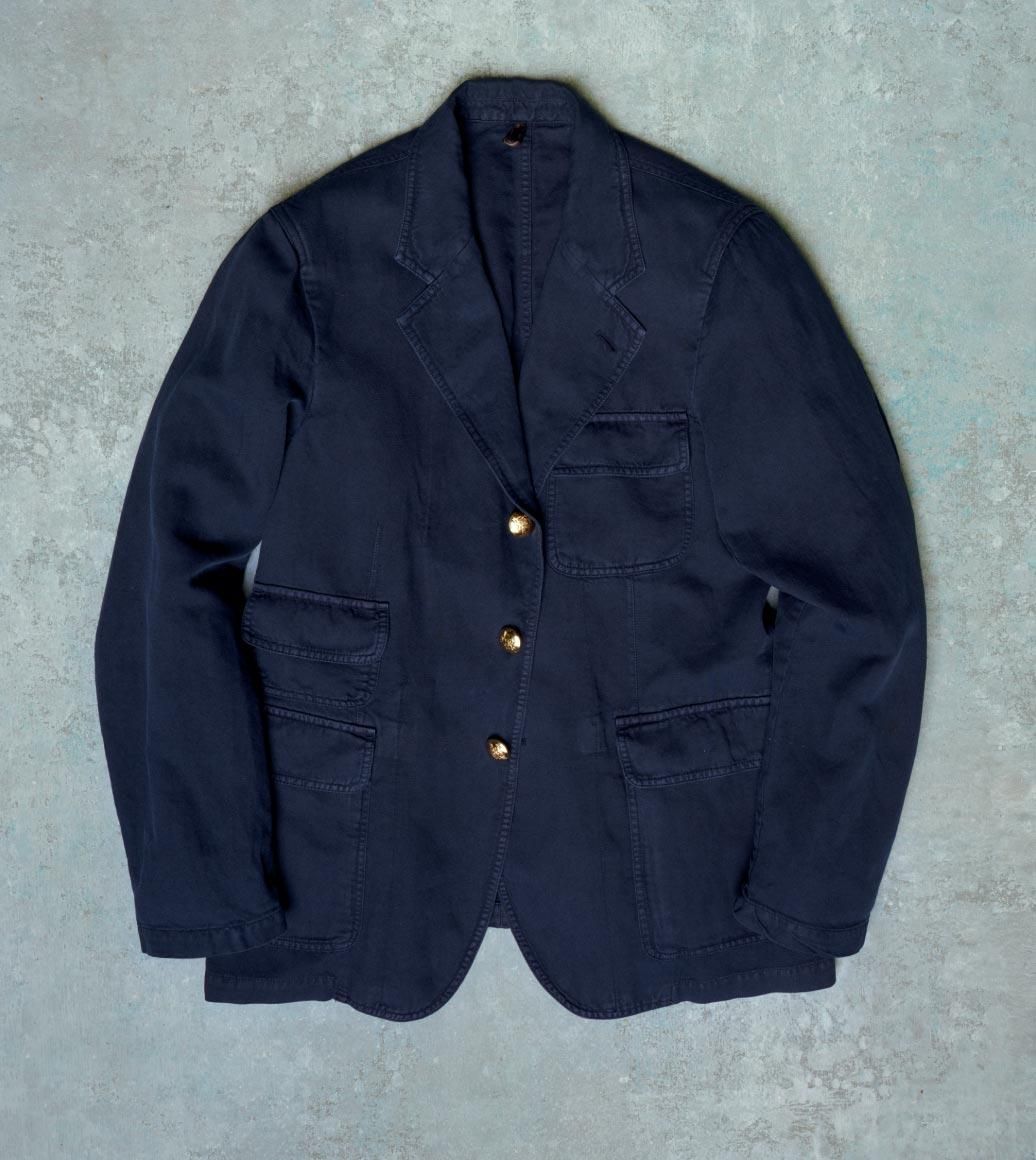 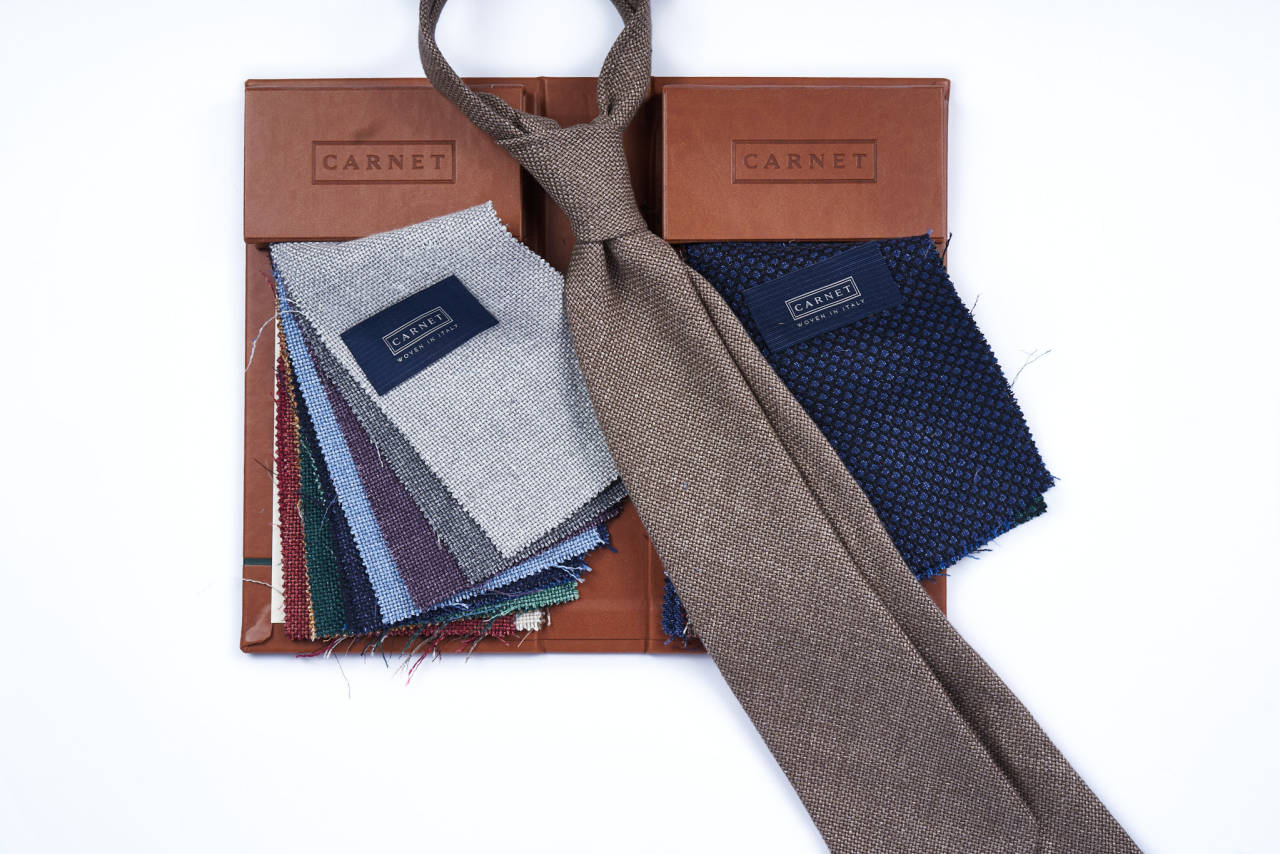 However, some of Put This On’s more traditional readers may be scrolling through this article, thinking: “All that’s well and good for hippies, but how am I supposed to wear hemp with my double-breasted blazer when I’m watching Cambridge beat Oxford in their annual regatta?”

The answer comes from our friends at Vanda Fine Clothing. Woven by the Italian mill, Carnet, these 75 percent hemp, 25 percent wool ties offer the texture and body of hemp with the bounce of wool. I received a tip about the style from Linus Chu, aka @iamshufaja, who spoke to me via Zoom while wearing his recent purchase. With a background in international relations and environmental policy, and now studying environmental law in London, Chu finds himself in pretty conservative settings when it comes to dress. His review, however, was top-notch. “Interesting woven texture [from the] basket weave pattern … very durable … a good weight,” he told me. “And actually quite versatile!” Vanda’s hemp blend tie was Chu’s little way of trying something new, daring even, while still blending in with the Brussels crowd. It was proof that even the most risk-averse man can enjoy the benefits of hemp without looking like a Deadhead.

Drake’s also has a cotton-hemp version of their Games Blazer, which is their take on a more casual alternative to the traditional sport coat. This fully unlined, unstructured coat has a three-roll-two closure, four patch pockets, and traditional facings, which puts it somewhere between tailoring and workwear. This version is made from an enzyme-washed cotton-hemp fabric to give it a worn-in look, and interchangeable buttons that allow you to move between plain and brass button trims.

At this point, only two things are stopping hemp from popping off. The first is supply chain issues in the US. Currently, most hemp is imported from China because we don’t yet have the infrastructure to process it. The second obstacle is a lack of consumer knowledge or demand. While it may be challenging to go out and build your own hemp gin, you can help the fiber catch on by choosing to buy hemp clothes where you can. So this 4/20, consider ditching your Dad Grass in favor of a sustainable high that will last years to come: hemp jawnz.