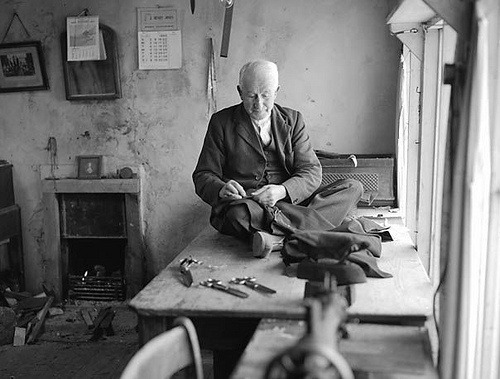 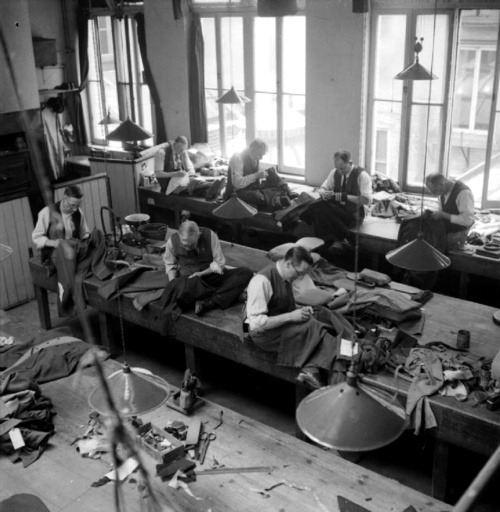 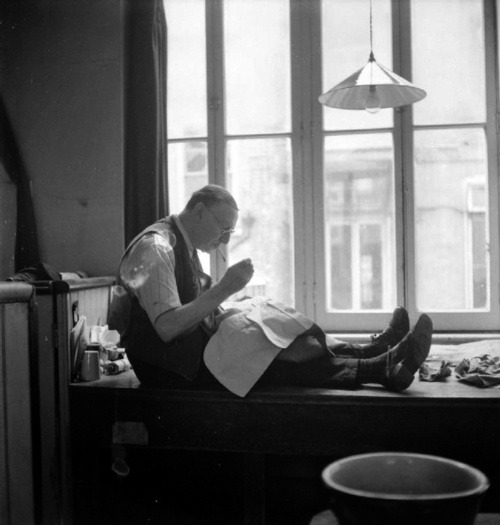 I mentioned yesterday how I’m working my way through Thomas Girtin’s Nothing but the Best, a book about the history of English craftsmen. It’s full of great little stories.

Like this one about how tailors used to sit cross legged on the tables and floors of the workroom, as you see above (two of the photos were taken at Henry Poole & Co, the acknowledged “founders” of Savile Row and creators of the dinner suit). Tailors use to sit like this even when pressing and molding the jackets they worked on, and they carried the sleeveboards across their knees. That’s pretty remarkable when you consider that a professional tailor’s iron at this time weighed eighteen pounds or more, so working like this for hours on end would physically “deform” the workman.

Still, Mr. McCulloch, a tailor who was interviewed for the book, remembers those being happy times. He notes that they used to sing songs while they worked, such as this one written by an old trouser maker named Harry Zietz.

Bill Smith was a tailor, a ‘prentice he’d been

Whose work was as perfect as ever was seen

He knew how to build up a front and to press

A frock coat, a morning coat, lounge, or a dress

For full forty years at the trade he had worked

And during that period no job he had shirked

But one fact his conscience continually mocked

He’d not made a job yet that couldn’t be cocked!

Will be absolutely perfection I’ll stake;

Every point will be studied, the collar fit clean,

The edges I’ll prick with a fifteen between."

The fronts then he molded artistic and true

He pinked it so much that his shopmates turned blue

A penny an hour were his earnings if clocked

On this wonderful garment that couldn’t be cocked.

The song then takes an unexpected turn, as our tailor Bill Smith finds out he made the wrong thing

… the words that gave them a most terrible shock

Were "I ordered a lounge and you’ve made me a frock.”

The chorus ends with:

Fol-de-rol-liddle-lol; the theme of my song –

No matter what happens the journeyman is wrong!

(Note: “lounge” here means lounge suit, which is another term for the kind of suit you typically see today).

Filed Under: Music, Nothing but the Best, Songs, Tailors, Thomas Girtin