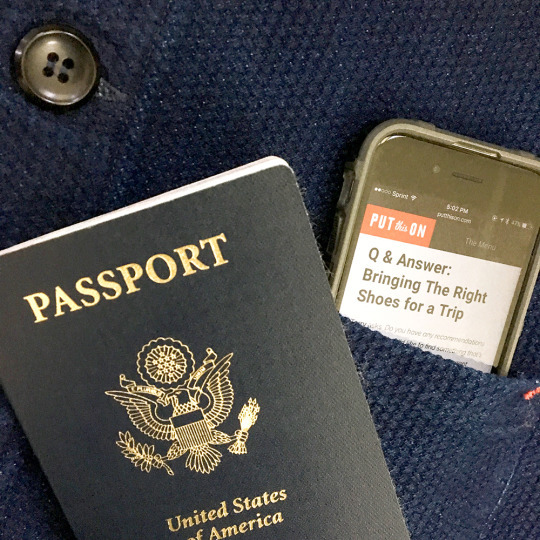 As an aspiring PTOMan, I try to find ways to test out the site’s tips IRL. I recently had the opportunity to travel to Tokyo and Taipei, thus providing me with an opportunity to see how well I’ve mastered Put This On’s travel wisdom. What ensued was a good deal of trial and error (emphasis on the “error”).

One of the game-changing lessons I learned early on was how to pack a shirt. Even on a two-week trip, I prefer to live out of a single carry-on and that means being as efficient as possible with space. There’s something very satisfying about figuring out how to properly pack a bunch of shirts to perfectly fit the dimensions of one’s luggage; call it Tetris Syndrome. Just because it’s practical doesn’t mean it can’t also be pleasurable.

We’re at peak season for brands to pitch us on “summer weight” shirts and pants, but as great as the term sounds as ad copy, it can be a bit of a misnomer. Just because fabric is light in weight doesn’t mean it’s ideal for warm and humid weather. I brought along two pairs of lightweight, supposedly “made for summer,” cotton trousers but both had tight twill weaves, thus preventing the fabric from breathing well. Without enough air circulation to wick away body moisture, the pants turned into a khaki sponges, clinging to my legs.

I had better success with pants made from a more loosely woven chambray, which felt consistently comfortable and airy even in muggy climes. PTO has long recommended tropical-wool pants for this very reason but in my haste, I overlooked packing a pair. That won’t happen again.

Both Jesse and Derek recommend at least two pairs of shoes for traveling: comfortable sneakers for heavy walking + dressier shoes that can complement a diverse wardrobe. For the latter, both favor brown, pebble-grained chukka boots with rubber soles. I already owned a pair of brown leather zip boots with rubber-stitched soles, so I brought those as a test run.

The results were mostly favorable as they were easy to dress up or down. The main problem I ran into -– and couldn’t have predicted – is that these boots have a stiff heel counter that made them uncomfortable on during a 10+ hour plane flight. My solution was to simply take them off once I boarded, but that wasn’t ideal. In the future, I could try bringing unlined chukka boots instead or just throw down for a pair of those Crockett & Jones Brecons that Derek likes so much.

I humbly submit that shirt pockets are a must for traveling. When you’re on planes, trains, buses, etc., you spend a great deal of time seated. In that position, fishing objects out of your pants can be a pain. Even a modestly sized chest pocket provides a convenient place to temporarily keep things such as sunglasses, a boarding pass, loose bills, etc. To be clear, for any item you want to keep safe, you want a jacket with zippered interior pockets. But in situations where you just need to free up your hands for a minute, especially when seated, I’m grateful for the shirt pocket.

The only problem I’ve found is when some brands (*cough cough* J. Crew) insist on producing shirts with buttoned pockets. I’ve given serious consideration to taking a seam ripper to them as the button flap always gets in the way. Moreover, I’ve just never been in a situation where I felt the desire to button a shirt pocket.

As Dan at A Fine Tooth Comb noted, it pays to buy Japanese brands in Japan. Not only do you avoid covering export overhead costs, but many retailers allow purchases by foreigners to be tax-free. Combining the two meant that I could buy local Japanese brands at a 40% discount from what the exact same item would cost in the States.

For those of you about to travel abroad, it’s worth researching if your destination has a similar tax-free/ VAT refund policy. If they do, just be prepared to go out shopping with your passport (preferably not in your shirt pocket). In both Tokyo and Taipei, depending on staffing arrangements, the tax amount was either 1) taken directly off the purchase price or 2) initially charged but then immediately refunded in local currency when I took my receipt and passport to a dedicated tax-free counter (which will either be in-store or often at the airport). Just be aware, it’s up to each store to set their policy. Some stores didn’t offer tax-free purchases. Other stores only offered the refund if you spent a minimum amount.

Personal Postscript About Getting Your Fit On

By happy coincidence, we stayed in a Tokyo apartment less than fifteen minutes from the flagship store of one of my favorite Japanese brands: Blue Blue Japan. I’ve long admired their sashiko coverall jacket and as it turns out, they have a new version – not even in their online catalog yet – made from dobby (rather than true sashiko cloth) that’s identical in construction, look and texture but for half the cost (~$175). (That’s the jacket in the photo above).

I had my passport on me that day, so I immediately bought one, but later had a nagging feeling that it was one size too small. It was ever-so-tight in the shoulders. However, I happily discovered that Blue Blue Japan operates a store inside of Narita Airport. On the day we were flying out, I stopped by and they had the same jacket, one size larger. It fit much better and though the clerk was initially unsure if they’d allow an exchange – understandably, I doubt they get many exchange or refund requests at that particular store – his manager signed off on it. I left Japan feeling even happier with my purchase. Airport branches FTW.

Oliver Wang is an associate professor of sociology at CSU-Long Beach. He writes the audioblog Soul-Sides.com.