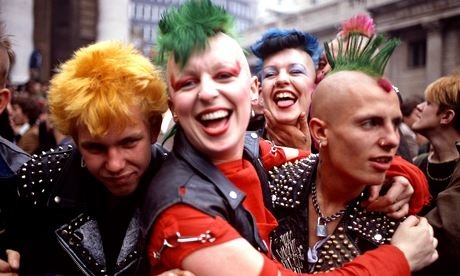 As anyone over the age of thirty knows, teens used to wear their taste on their sleeve. Punks dressed one way, emos the next, and hip hop enthusiasts another way entirely. Visit any high school between the years of 1970 and 1995 and you’ll see very distinct youth subcultures, often with teens hanging out with each other in clusters during lunch time. Things felt tribal.

Nowadays, however, it entirely possible to dress one way and act another. As Kiya Babzani from Self Edge once noted in his interview with Caught in the Crossfire, you can’t tell much from how teens dress anymore. Alexis Petridis has an interesting article in The Guardian exploring this phenomenon.

Something has clearly changed, and over the past week, I’ve listened to a lot of hypotheses as to why, of varying degrees of plausibility. A sociologist at the University of Sussex, Dr Kevin White, tells me he thinks it has something to do with Britain’s changing class structure. Elsewhere, there’s a rather grumpy “tsk-kids-today” theory that teenagers are now so satiated by the plethora of entertainment on offer that they don’t feel the need to rebel through dress or ritual – and a deeply depressing one that people are too worried about their futures in the current financial climate to be creative. And I’ve had a long and fascinating conversation with historian David Fowler, author of the acclaimed book Youth Culture in Modern Britain, who has an intriguing, if controversial, theory that subcultures such as hippy and punk had very little to do with the actual teenagers who participated in them – “They were consumers … they were sort of puppets” – and were instead informed and controlled by a slightly older, university-educated generation. “Youth culture as a kind of transformative, counter-cultural philosophy, it has to be shaped by older people and invariably it’s by students,” he says. Today, the lack of anything equivalent to the radical student movements of the 60s that fed into both the hippy movement and punk means a lack of ideas trickling down into pop culture.

Meanwhile, Dr Ruth Adams of King’s College London thinks it might be linked to the speed at which “the cycle of production and consumption” now moves. “Fashion and music, they’re much cheaper and they’re much faster today,” she says. “I think it’s a lot easier to be promiscuous, subculturally speaking. When I was a teenager, you had to make more commitment to music and fashion, because it took more of a financial investment. I had a pair of gothy stiletto boots, which lasted me for years: I had to make a sort of commitment to looking like that, because I wasn’t going to get another pair of alternative shoes any time soon, so I had to think about which ones I wanted. Now, it’s all a bit more blurry, the semiotic signs are not quite as hard-edged as they used to be.”

But the most straightforward, prosaic theory is that, as with virtually every area of popular culture, it’s been radically altered by the advent of the internet: that we now live in a world where teenagers are more interested in constructing an identity online than they are in making an outward show of their allegiances and interests.