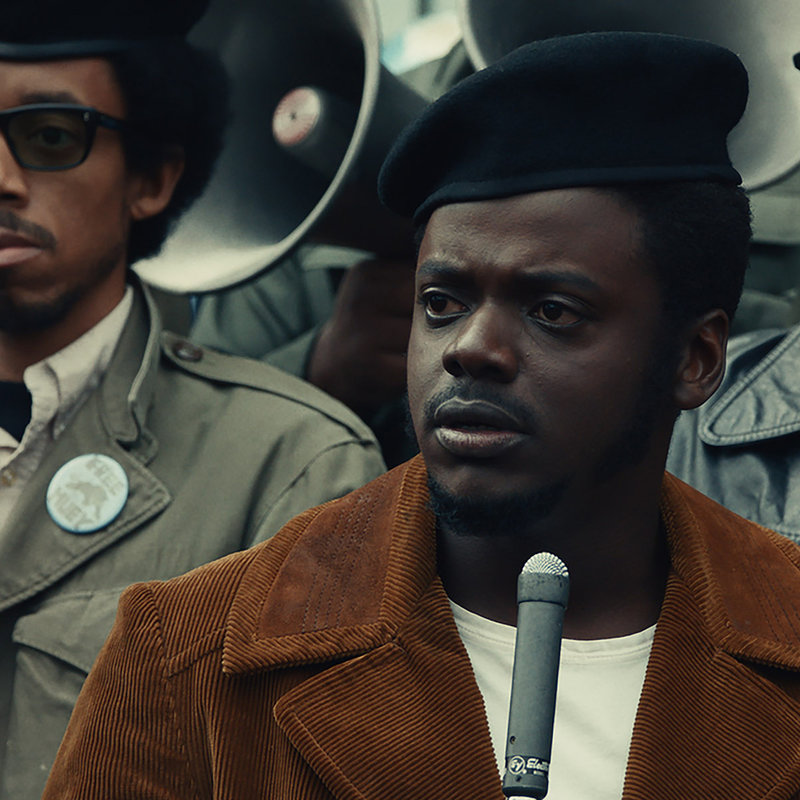 Judas and the Black Messiah is a period piece, but it’s not a relic. The film is about how law enforcement, both local and federal, harassed and eventually assassinated Fred Hampton, the Chicago chapter leader of the Black Panther Party. The story holds lessons that are as relevant today as they were in 1969, especially as many Americans are grappling with how this country’s history casts a long shadow. This film is serious, but it’s also visually enrapturing, not least of all because of the work of costume designer Charlese Antoinette Jones.

In researching for this film, Jones dug into the archives, pored over books, and conducted interviews. She reviewed several film documentaries about the Black Panther Party, including a 1968 French documentary that trailed Fred Hampton and Bob Lee (the founder of the original Rainbow Coalition) around as they met with the Young Patriots. Her attention to detail allowed for some amazing historical accuracy in this new film. Many of the clothes worn are actual vintage pieces from the 1960s, procured from various shops in Los Angeles, Ohio, and Atlanta. Whatever Jones and her team couldn’t find, they had custom-made. The trench coat seen at the beginning of the film on William O’Neal (played by Lakeith Stanfield) is bespoke. So is the pair of boxers on Fred Hampton (played by Daniel Kaluuya) when he’s killed. Even for something as simple as the boxers, Jones wanted to get the details precisely right. “We designed the fabric, got it printed in New York, got samples shipped back and forth, approved the samples, and then re-created those boxers in-house,” Jones tells Who What Wear.

As with many films, the costume choices here help drive the storyline. The mix of army surplus and sportswear creates a practical and active look, both relaxed and ready for action at any minute. These decisions are at the center of what is depicted in the film, as the Black Panther Party members were full-time revolutionaries always in uniform and always in danger. Additionally, Jones notes in her interview that members of the Black Panther Party wore things for particular reasons. Berets were an international symbol of resistance; dark sunglasses helped members shield their identity from law enforcement. And unlike their counterparts in Oakland, California, who were known for wearing black and brown leather jackets, Black Panthers in Chicago favored OG-107 military surplus gear. Jones says:

According to Hampton Jr., there were several reasons behind this style distinction. One is that the camo jacket was readily available. Someone served in your family, or you may have served in the Vietnam War and had just come back—just take off the U.S. Army badges and make it nondescript. It also symbolized that the U.S. government and Chicago police were at war against Black people and the Panthers specifically. Also, it highlighted the ongoing draft because there was a lot of movement against the draft and the Vietnam War, so it was also a means of protest; war was going on here, too.

From my research and conversations with Hampton Jr., it was made clear that the Black Panther Party’s uniforms were not only functional, but also they loved to flip the meaning of something and make it work for them and their causes, and that’s shown in the clothing they chose to wear. They never chose to wear this stuff to be intentionally stylish. It was functional, and it just ended up looking cool. That’s the beauty of it; their uniform made other people want to get involved in the movement because they looked so cool. 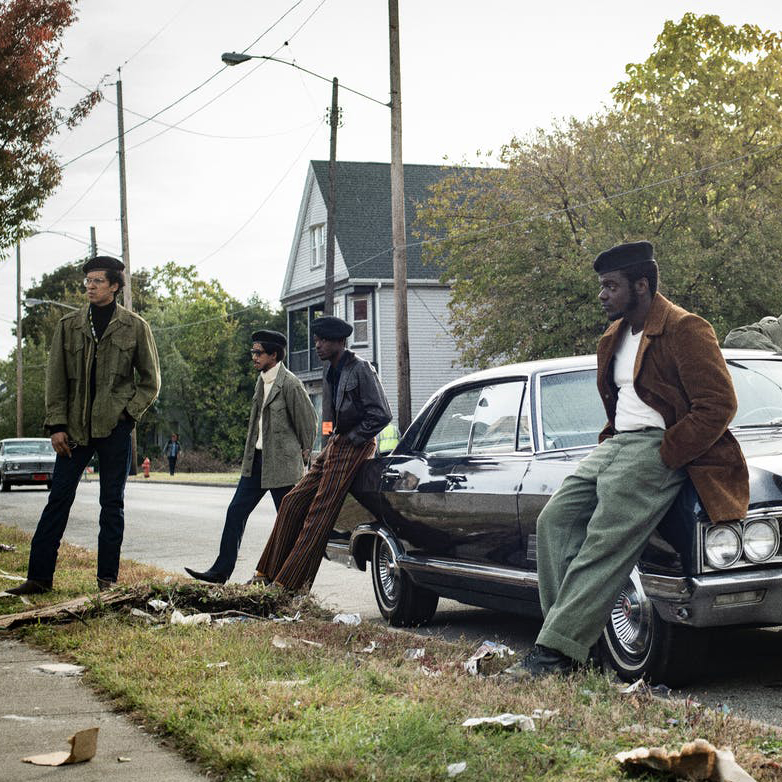 Although the film is set in the late 1960s, many of the outfits hold style lessons that still ring true today. Many of the jackets worn in this film are still available in pretty large quantities, including all-time classics of the military genre: M-1943 field jackets, M51 field jackets, and OG-107 fatigue pants. There’s also a fantastic amount of variety in the ways such items are worn. Some are wearing jackets that are too big, some too small, and all come in various shades of green due to hard washing. Yet, everyone looks great. This is the kind of perfection that can only come from vintage. So instead of buying military-style gear from coveted brands such as Engineered Garments or Orslow, consider digging around your local vintage shop or surplus sellers. Not for reasons of authenticity, but because of how these unique garments look.

Jones also does an excellent job of using both slim and fuller-cut trousers throughout the film. The ways in which she mixes slim-cut trousers with baggy army tops show how you can combine two different cuts for a unique silhouette. Such mixing also stops you from looking like you’re in a costume. At the same time, wider fatigues also work well, and can be a first step towards trying pants that aren’t strictly slim fit (a style that has dominated menswear since the early 2000s). Try combining wider fatigues with sportswear basics such as grey sweatshirts, or pairing them with workwear items such as heavy flannel shirts, leather jackets, and work boots. 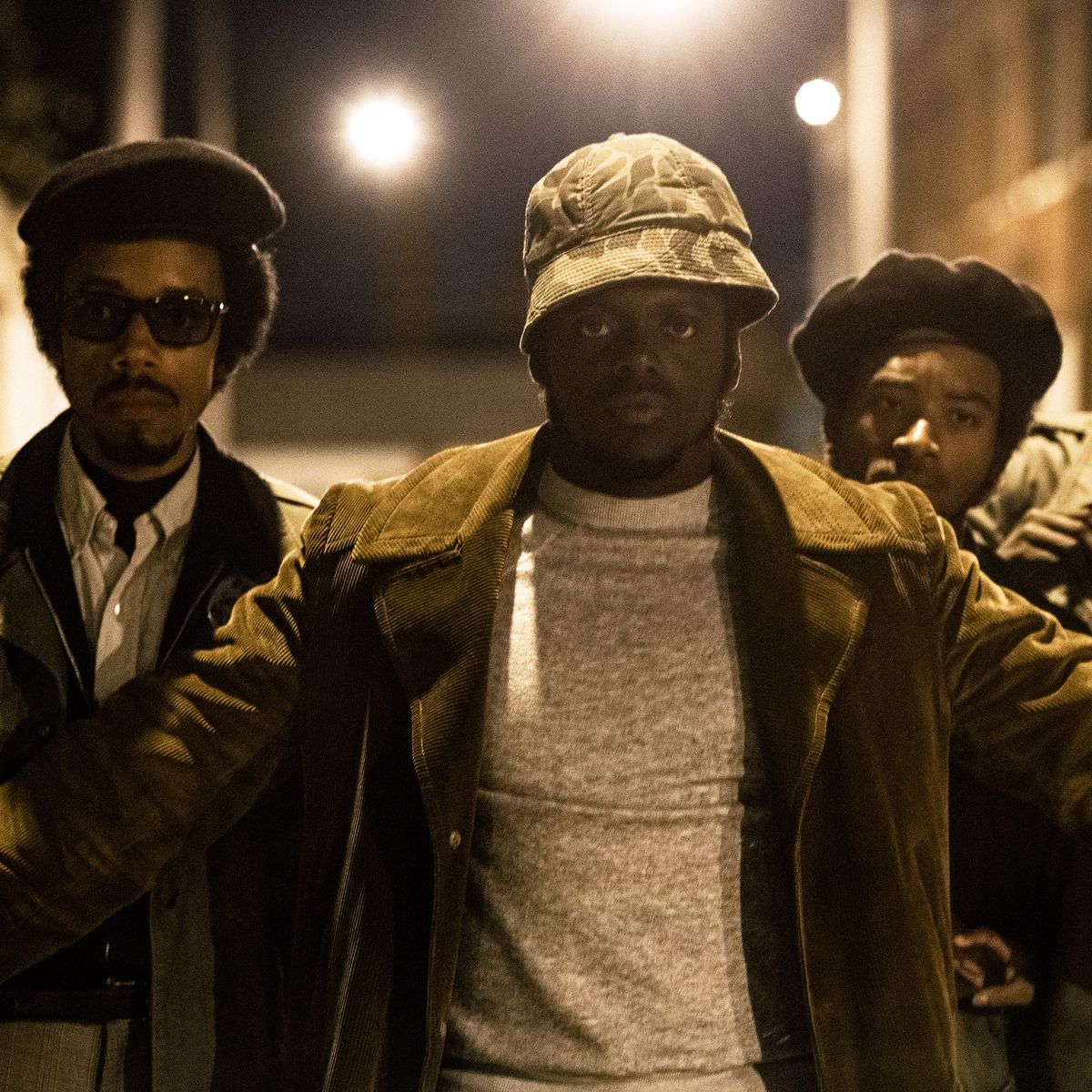 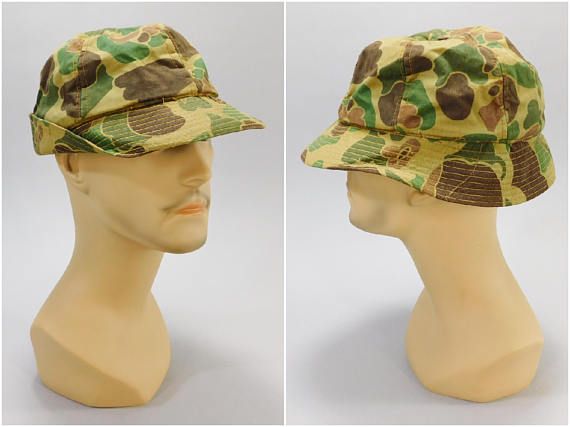 Of course, we need to talk about the hat. In a recent GQ interview, Jones said the hat is based on something Hampton once wore in a documentary. This style (often called a jones hat or simply a vintage hunting bucket hat) was a popular civilian hunting hat made famous by Donald Sutherland as Hawkeye in the movie version of M*A*S*H. Its unique bell shape is achieved by its circular pattern meeting at the top of the head. The brim’s front quarter is usually stiff, while the rest of it is soft. This design allows you to flip the back part up, making it look almost like a baseball cap. You can find similar versions on eBay and various sportswear stores. Some versions are insulated and have ear warmers you can flip down.

For bigger guys, Kaluuya as Hampton is also a great style inspiration. I have been wearing a version of this for months now while I work from home: a t-shirt tucked into a pair of high-waisted, roomy olive drab HBT trousers. I know it is a painfully simple combo that shouldn’t deserve mention, but Kaluuya as Hampton shows that simple combinations can look great on a guy with a bigger frame. Hampton’s ensembles usually consist of wide-leg and high-waisted trousers (very different from many of the other younger characters), simple t-shirts, and crewneck sweatshirts. It all works so well. When heading out, you can throw almost any style of overcoat on for warmth and style.

It can feel trite to talk about costumes in a film about such critical social issues, but there’s a reason why the clothes stand out and still feel relevant today. Actual Black Panthers understood the visual power of clothes. They knew how to use their wardrobe to create a message, which was particularly important in the turbulent 1960s and ‘70s, when counter-cultural movements were challenging the status quo. Today, we are more aware than ever of what our clothing choices say about us. Building a wardrobe can be about something as simple as creating something visually pleasing, or it can be a way to subvert other people’s assumptions about us. Judas and The Black Messiah’s costumes are at home in our current world, where our clothing choices are still key parts in broader struggles in identity and culture.