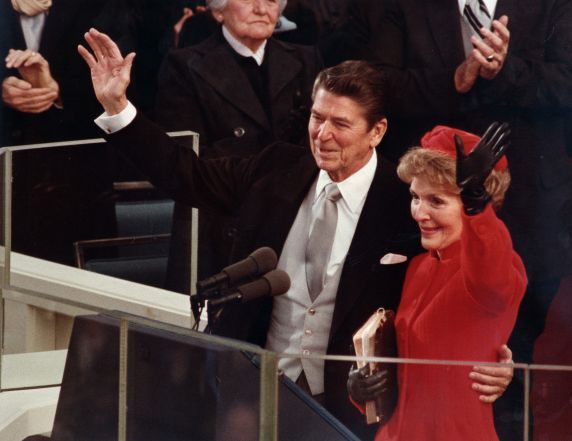 It being President’s Day here in the United States, I thought it might be fun to discuss a bit about the man who I’d consider our last stylish president: Ronald Reagan.

It goes without saying that John F. Kennedy is the larger style icon – and I think he deserves the title. His youthful Ivy look tends to capture a lot of imaginations alongside the mythology around the Kennedy name. But much has been said about JFK already in regards to style and Reagan intrigues me for a lot of reasons.

I consider Reagan the last stylish president for a simple reason: he was the last commander in chief to dress his pocket with a square. As you can see from his 1981 Inauguration Day photo, his pocket features a white linen square that’s in almost every photo of him wearing a jacket and tie I’ve seen.

I wasn’t sure where this came from. Jimmy Carter, who preceded Reagan, never wore a square (that I could find) and neither did Gerald Ford or Richard Nixon. You have to go back to Lyndon B. Johnson to see the white pocket square emerging from a president’s breast pocket. After three presidents in a row, you’d think the era of a pocket square presidency would’ve been over. And yet, Reagan brought it back.

I’ve long wondered why Reagan would buck tradition in this respect and wear a square, and the only reasonable logic I can think of is because of his Hollywood roots. Simply put, the man dressed well before the presidency and would continue to do so throughout it. Of course he’d wear a pocket square, just as he’d done all his life in entertainment and state politics in California.

The pocket square, however, seemed to not catch on. George H.W. Bush, Clinton, Dubya and Obama have all opted to pass on the pocket linen for their suit jackets.

We now live in an era where image consultants dictate how a candidate must dress and perhaps the pocket square is considered too elitist or dandified for our times. It would be nice to see someone bring it back in the future, but until then Reagan will have worn the last presidential pocket square.