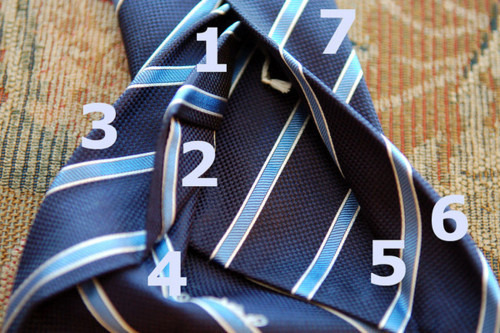 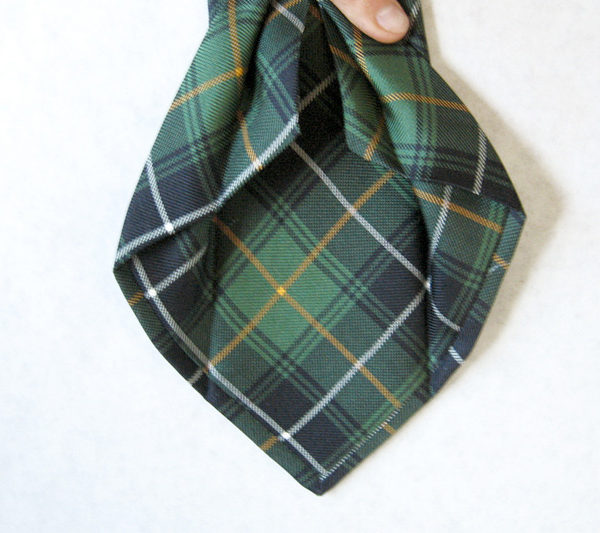 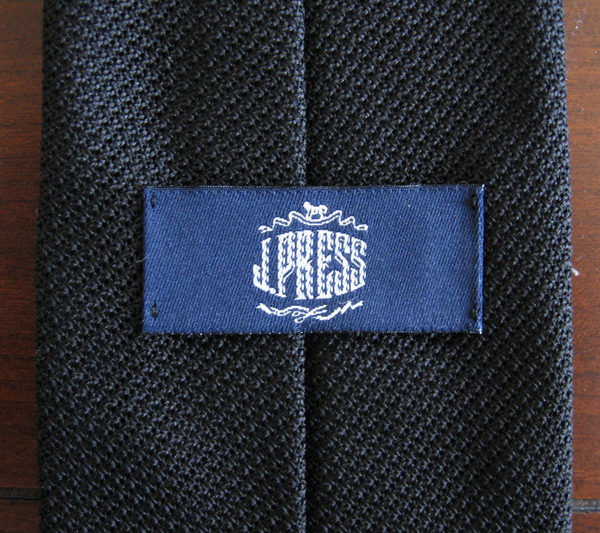 Keeper made from maker’s label 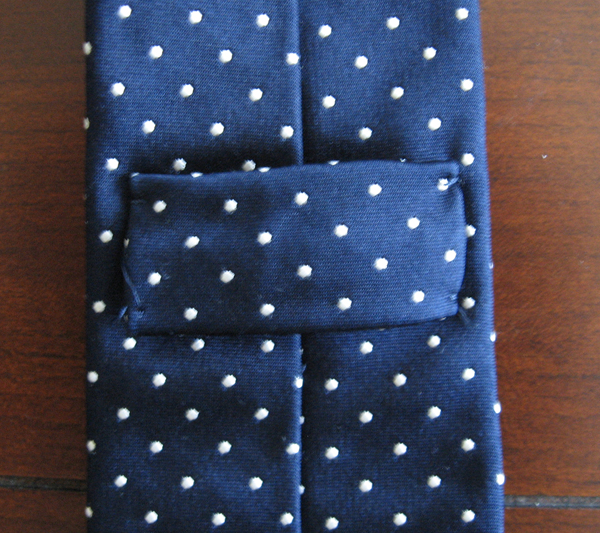 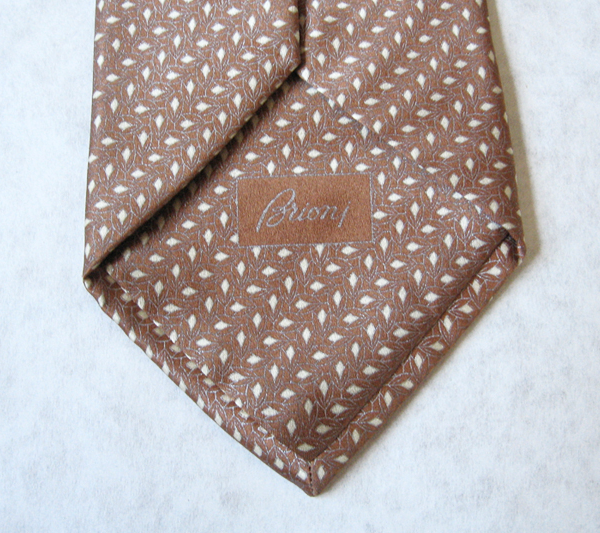 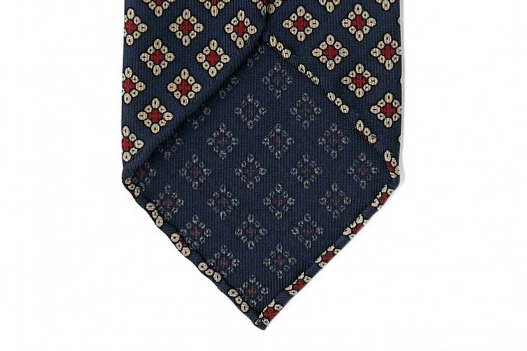 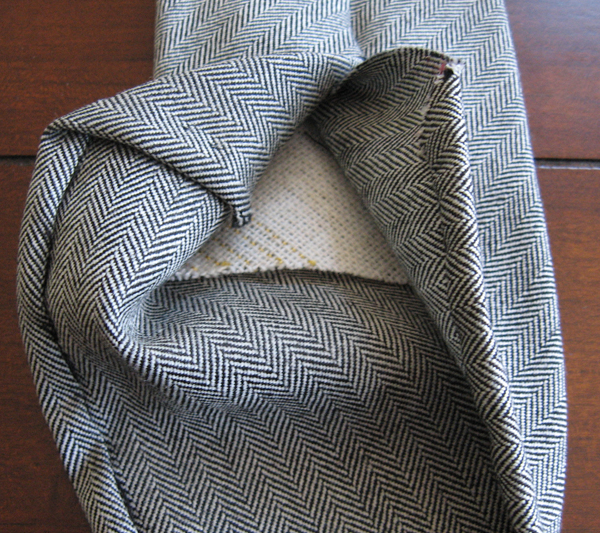 Lining inside an untipped 3 fold tie 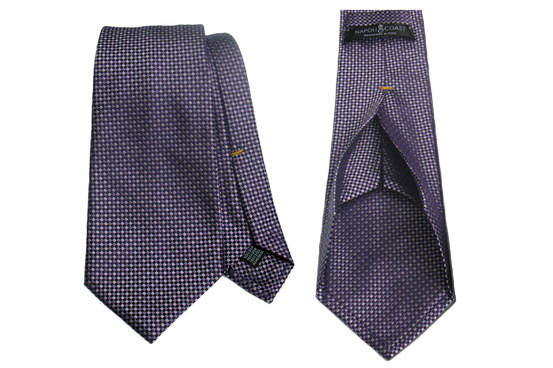 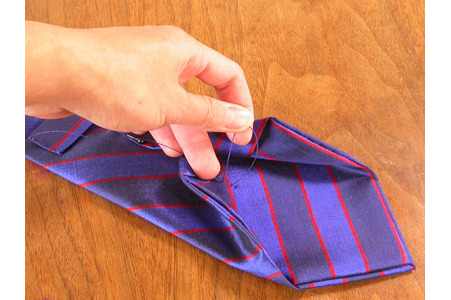 If you’re like me, you like to know how things are made. Sometimes this is so that you can know how to spot quality, and thus be a more discriminating buyer. Other times, it’s so you can appreciate things on a deeper level. So as an introduction to the necktie series, I thought I’d discuss the intricacies of how a tie is made.

A tie has five main parts – the envelope, keeper, tip, interlining, and stitching.

The envelope, also known as the shell, can be made from silk, wool, cashmere, linen, or cotton. Some are also made from polyester, but those should be avoided. When a tie is made from higher quality material, it will give you a superior knot, better dimple, and nicer drape. Depending on the weave, the fabric may also exhibit a certain movement as you wear it.

After the fabric has been cut for a tie, it has to be folded. Most ties have three folds, but some go up to six or seven. Will from A Suitable Wardrobe even has a twelve-fold tie, which is more unusual. What is the effect of having more folds? Well, it’s a bit nuanced. Additional folds add weight and drape, and can be necessary to add body to a tie if the silk is very thin. Moreover, ties with six folds or more are very difficult to make, requiring more material and skill, and thus are appreciated as artisanal pieces. They are also more likely to be made from better fabrics and made by hand, so they could signal other dimensions in the tie’s quality.

However, a tie’s quality can’t just be inferred just from the number of folds it has. For example, a seven-fold isn’t necessarily better than a three- or six-fold. Though they’re more difficult to make, a seven fold is more likely to become wrinkled and flop around in the wind. The practice of multi-fold ties has also become a kind of marketing gimmick to trick less informed customers. For example, some Chinese producers are now producing seven-fold ties using low-grade silk and lower quality mass construction techniques, hoping they can get by with just the sell of “a seven-fold."

In the end, a well crafted three-fold will always be better than most six- or seven-folds. However, if you like complex craftsmanship, a well done seven-fold tie can be something very nice to have, much like a mechanical watch.

I’ve included a picture above that shows how to tell if a tie is a seven folds. It should be fairly simple – just count the folds – however, sometimes folds are hidden above the bar tack, so they can be hard to count. Be careful when you’re buying on the market too; sometimes what is marketed as a seven-fold tie is actually an lined, tipped six-folds.

The keeper is the band of fabric in the back that keeps your back blade in place. It can be made from the maker’s label, or from the same fabric the envelope is made from, in which case it would be called a self-loop or self-keeper.

Tipping is the material used to finish the backside of the tie’s end. It’s machine-stitched on and typically goes up three to four inches, but on some ties, can go as high as the knot (though that’s rare and makes for poor construction). If a tie is said to be self-tipped, it means the tip is made from the same material the envelope has been cut from. When a tie is untipped, the edges can either be sewn flat or hand rolled and hand sewn like the edges you would see on a nice pocket square. If the tie has hand rolled, hand sewn edges, check to see if there are wrinkles or dimples on the front of the tie. If there are, the sewing was done too quickly, and a mark of lower quality craftsmanship.

The interlining is what constitutes the "body” of most ties. If the envelope’s material is not robust, like wool or a thick silk, then it will need a wool or wool blend fabric inside, on which the envelope is folded over. Almost all luxury ties will have a pure wool interlining. This interlining helps the tie keep its shape, drape on the wearer, and shake out wrinkles after it has been worn. Remember, wool has more “memory” than silk or linen, so it can help the tie recover its original shape after its been worn. If a tie has no interlining, it will often need to be folded more than three times to give the tie some body. How many more is up to the maker and lightness of the fabric.

Finally, there are the stitches and crafting used to put all these pieces together. Along with the pattern making and how the fabric is cut, the care with which a tie is sewn is the most important element. Luxury ties are almost entirely hand made. Some of these hand details include bar tacks on the back of both ends of the tie. This hand sewn detail that provides a more durable joining than the standard stitch you typically see in machine made neckties. Luxury ties will also feature a hand sewn slip stitch, which is the long vertical stitch sewn up the back of the tie. Low end ties will have the slip stitch done on a LIBA machine, like this. A hand sewn slip stitch, however, will be a bit looser and allow tie to move along the hidden stitch thread. This will ensure that it won’t rip or tear when it’s being wrapped tightly around your neck. It will also allow the tie to return to its original shape after you’ve untied it.

To check for the quality in a tie, ask the seller about the silk and interlining’s composition and weight. Anyone selling you a luxury necktie should be able to tell you something about it. Also examine the finish and try putting it on. Does it give you a good knot and dimple? Does it drape nicely? Does it feel well balanced? When you take it off, does it return to its original shape? Are the edges nice and rolling, instead of creased and flat? In the end, many of the elements I’ve discussed should go into the performance of a tie, and that’s what you should look for when buying one. Try on a high-end tie first, so that you have a benchmark to compare to, and then try a cheap polyester tie. That experience should be a good first step in beginning to understand what to look for.

(Special thanks to David Hober for help with this article)

(Photos by Voxsartoria, Napoli Coast, Sam Hober, Drakes of London, and me)

Filed Under: The Necktie Series