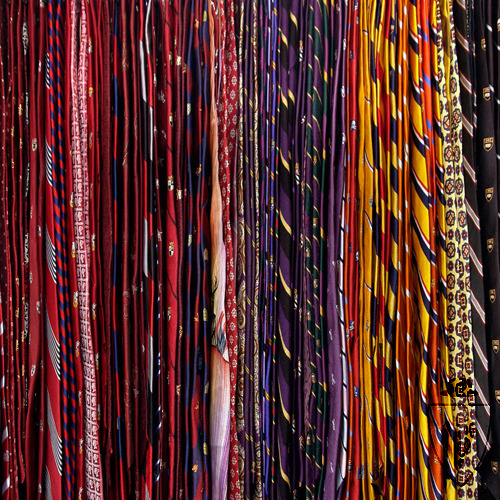 Removing your tie: Always untie your tie in the same way you tied it. Never yank on the tail until it comes through the knot. If you do this, you will stretch out and misshape the interior and exterior fabrics, which over time will cause warping. Also, make sure your nails are nicely trimmed when you reverse the knot. Especially for some silk ties, such as diamond weaves by Charvet, a loose nail can pull the silk when you dig your fingers in.

Every once in a while, some new member on StyleForum will confess that they leave their ties knotted and just hang them up by their loops. This is terrible. First of all, it robs you of the pleasure of tying a knot, which is really enjoyable once you become good at it. Second, by keeping your ties knotted, you misshapen the blade and create really nasty wrinkles that will be hard to get out.

Removing wrinkles: Some people iron their ties with a towel between the hot iron and silk. I’ve seen a few ties ruined this way, so I can’t imagine ever doing this to one of mine. Instead, I recommend just hanging up your tie after you wear it. If you buy quality ties, the interlining will be made of wool, so the fabric will naturally relax. If you’re in a pinch, try hanging the tie up in the bathroom while you take a hot shower. The soft steam from the shower should help the process along.

Storing your ties: For most of my ties, I hang them up after I wear them so that the fabric can relax. Then the next day, I fold them in half, so that each pointed end is touching each other, and then loosely roll them up. For knit ties, I skip the hanging part because they don’t wrinkle, and are more likely to warp if they’re hung for too long. Those just get loosely rolled up when I get home.

You can store your rolled up ties in a drawer with or without an organizer (I personally use one like these). Woodlore also has some nice cedar equipment, which you can buy for pretty cheap through Meijer.

If you have a large collection of ties, or don’t wear yours that often, it may be better to just hang your ties up instead of rolling them. I’ve found that when ties have been stored rolled up for too long, they can retain a bit of a curve once you unroll them. It falls out within about an hour’s wear, but I suppose the problem can be avoided altogether by just hanging your pieces.

Cleaning: Jesse wrote a great post about how to clean ties. I strongly agree with his TieCrafters recommendation. They’ve done wonders for the ties I’ve accidentally damaged. They can also do alterations on your ties – making them shorter or skinnier – if you need them to. Just remind them that you don’t want your ties pressed, otherwise you’ll lose the nice soft edges.

Traveling with your tie: I’m a graduate student, so I only need one tie when I travel. As such, I wear mine on the plane. For people who need more ties when they travel, you can try rolling up your ties and putting them in your shoes, which you then pack into your luggage. This can be unpleasant if you have stinky shoes, however. For those people, try these leatherette roll cases (with or without a button clasp) or Col. Littleton’s No. 12 tie case. I’ve never tried any of these products, however, so I can’t attest to their quality.

I’m currently working on a similar series for custom shirts, and I’m really excited to say that it’s even better than this tie series. Keep an eye out for it.