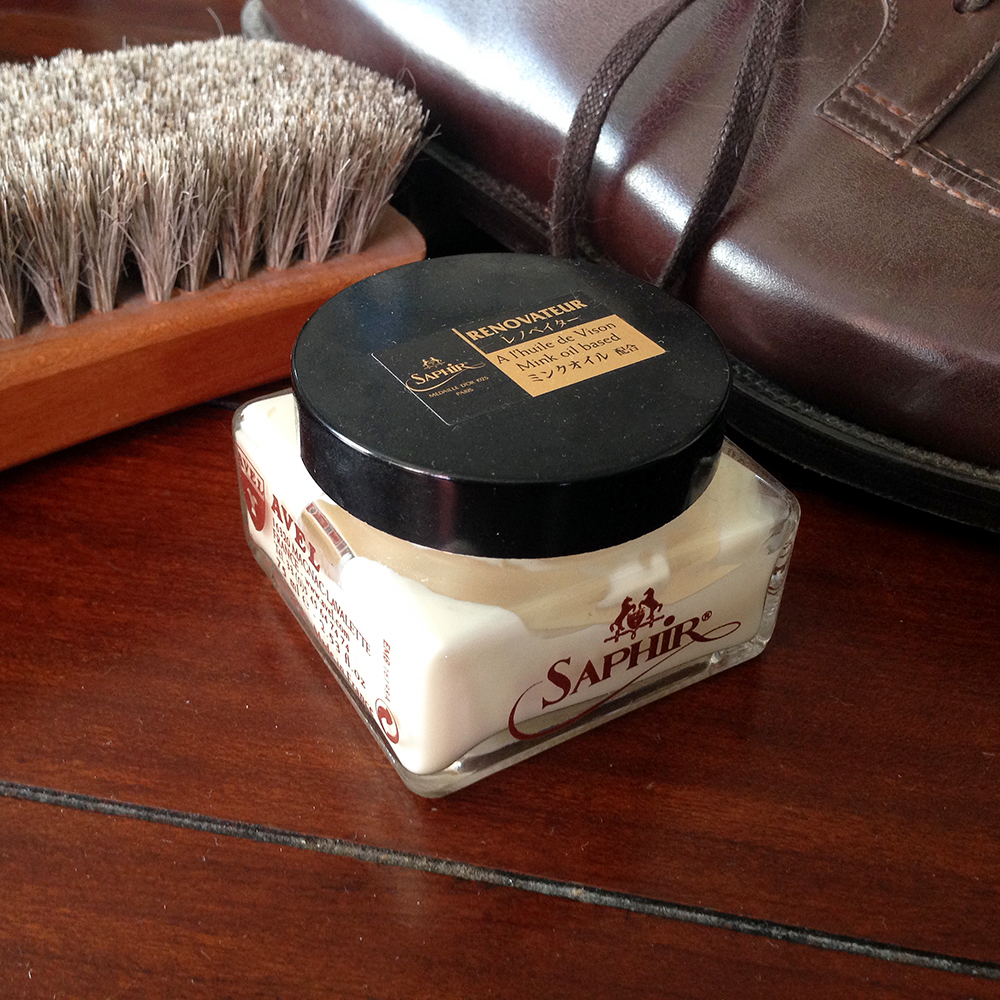 Saphir’s Medaille d’Or Renovateur has been called “liquid gold.” Men who are obsessive about their shoes often recommend it as the best all-purpose leather conditioner and cleaner. It’s a creamy white lotion that comes in a stout glass jar, smells vaguely sweet, and looks more like a high-end skincare product than something you would slather on your shoes. At $25 for a bottle, it’s also much more expensive than other conditioners and cleaners, but I imagine that’s part of the appeal. If you’re spending more than $300 for shoes, you probably enjoy knowing you’re getting nothing but the best.

My experience with Renovateur has been much less positive. About five years ago, I was applying some on my Saint Crispin’s chukkas when the doorbell rang. I went to answer my door and then returned to my living room a few minutes later. After a few quick wipes with a soft polishing cloth, I was surprised to see the color almost disappearing from my uppers. The leather looked splotchy and had a slightly tacky surface. In the photos below, you can see how the color almost looks like it dripped off.

I ended up sending the shoes back to Saint Crispin’s for repair. They’re located in Romania, and with the repair cost plus shipping fees, I paid somewhere in the neighborhood of $300. On the upside, they did a fantastic repair job, and the boots came back to me looking almost brand new.

About a year later, I bumped into Phillip Car, owner and director of Saint Crispin’s, at a trunk show in San Francisco. I reminded him of the incident, and he said he recommends against using Renovateur on his company’s shoes. “The stuff is kind of harsh,” he said. “You can condition the shoes with just a good cream polish. If it has enough oils in it, the oils from the polish will nourish the leather. There’s almost no need to use a leather conditioner on our shoes, but especially Renovateur.” 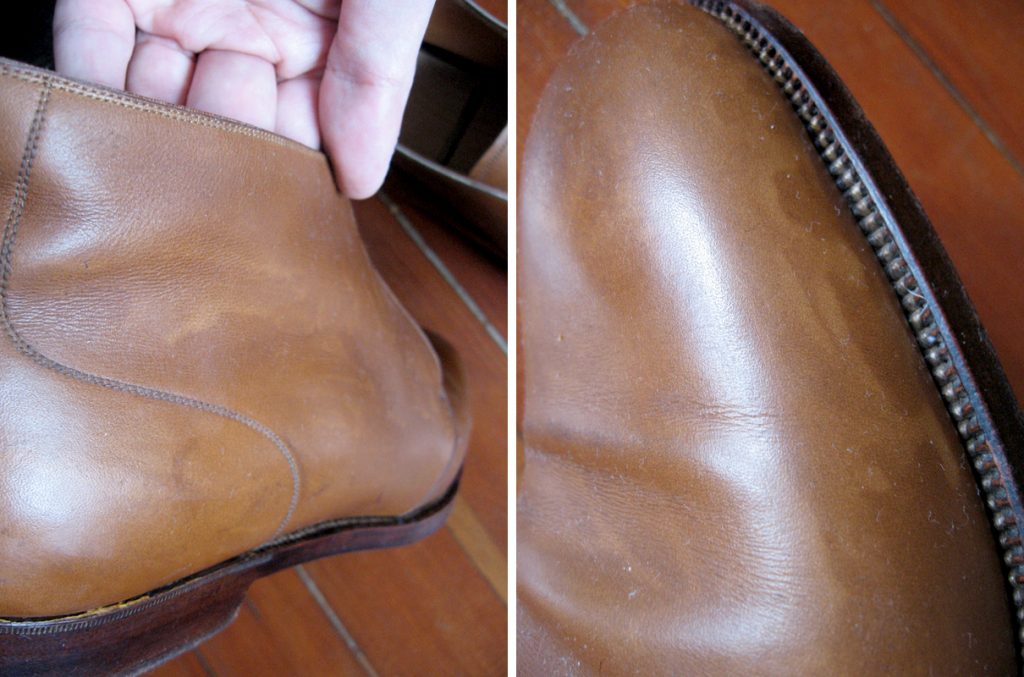 No one knows what’s in Renovateur. Like other shoe care products, the formula is a closely guarded company secret. But the label does say the conditioner is based in mink oil, which is a controversial compound. Some mink oil products on the market contain a high percentage of synthetics, which can clog up the pore of your uppers (Renovateur, however, is likely all-natural). Others say that it’s best kept to work boots, as it helps soften leather, and is not to be used on fine dress shoes. Others still say that it degrades stitching. Honestly, who knows.

I do know this: since my experience five years ago, I’ve seen maybe about a half dozen other cases on StyleForum pop up, where people have complained about the same thing. In every case, the person’s shoes are made from crust leather, which is an unfinished, unsealed leather that’s colored at the manufacturer’s factory using dyes. Companies use crust leather for a couple of reasons. For one, crust leather can result in a unique patina as the color wears away slightly unevenly (think of it like faded blue jeans). On the downside, to keep it looking its best, you often have to brush and polish it more often. Secondly, manufacturers use it because it can help cut down on their marginal costs. Instead of ordering 800 brown leather hides and 200 black leather hides, they can order 1,000 unfinished hides and color them however they want — black, brown, tan, burgundy, and even dazzling purple. This way, they can get a better bulk price on their hides and color things as they need, depending on orders, which results in less waste.

It used to be that you’d only ever see crust leather on the higher-end of the market, such as shoes from Paolo Scafora and Saint Crispin’s. In the last few years, however, I’ve been surprised to see it show up in more affordable ranges. Companies such as Carlos Santos and Paul Evans, for example, have used crust leather in the past. This is one of the reasons is why we recommended against using Renovateur in our “menswear essentials” guide — some guys may be wearing crust leather without even knowing it. Renovateur is generally fine on more traditional aniline or vegetable-tanned leathers. But if your shoes are made from crust leather, it can strip some of the color right off. In those cases, you’ll have to send the shoes to someone for repair (ideally, the workshop that colored the leather in the first place). You’ll also have to go a couple of shades darker than your shoes’ original color to cover up the damage. Even then, good results are not guaranteed. 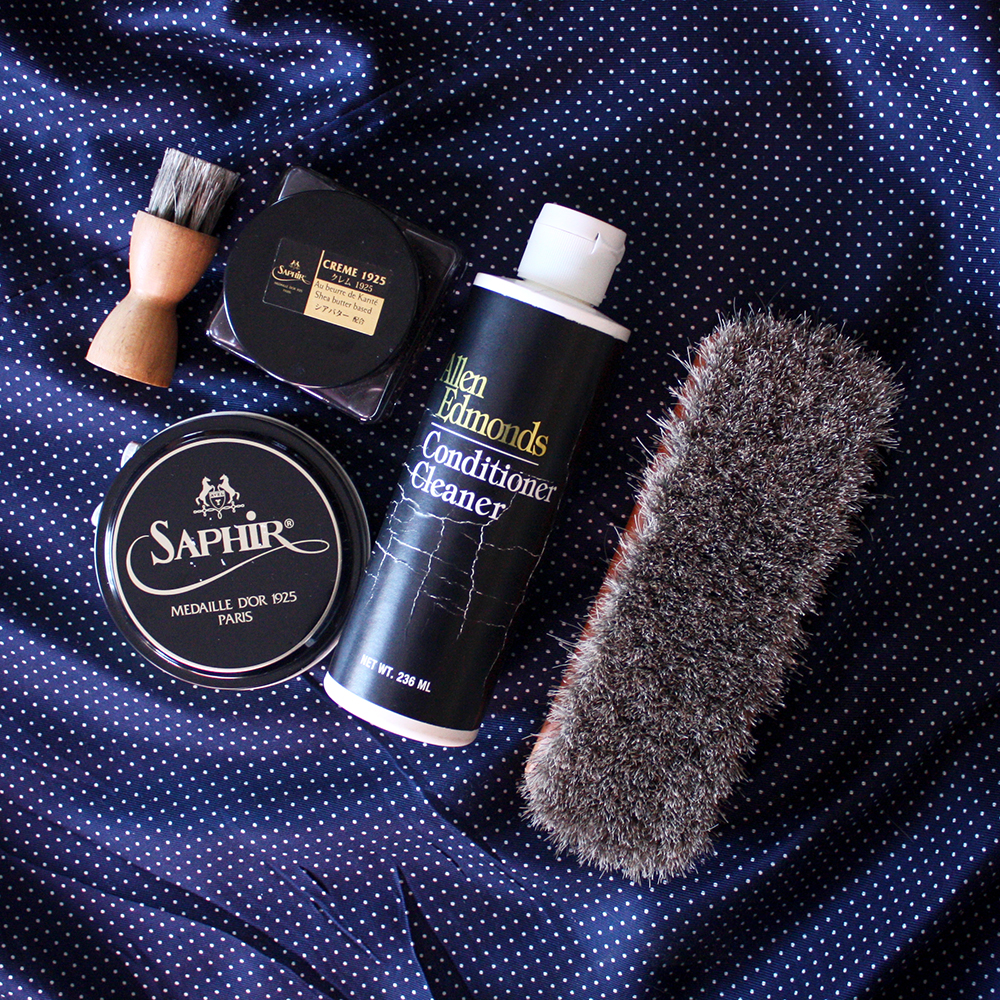 How do you know if your shoes are made from crust leather? You can ask the company that sold you the shoes. Or, better yet, just don’t use Renovateur. You can condition your shoes using the following options: