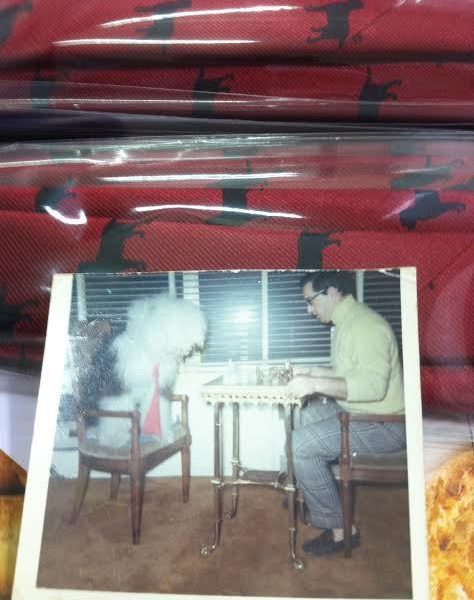 Our friend Paul at Chipp Neckwear is a great storyteller. In fact, one of the better parts of my job is being able to call Paul on occasion, ostensibly to talk about business (he’s a sponsor on this site), but mostly to enjoy one of his fantastic stories. This morning, he emailed me this lovely story about his dog Herman, who’s now the logo of his Chipp Neckwear business:

When my wife and I got married in 1966, we bought an Old English Sheep Dog in England, who we called Herman. I soon realized that Herman was smarter than smart. I taught him how to play chess. In the photo above, Herman is just two years old, and he’d live until he was sixteen. Despite his intelligence, Herman wasn’t a very good chess player. We played many games throughout the years, but he only beat me three or four times.

Herman often accompanied me to work (it’s good to own your own building). He was a small celebrity of sorts – not just in the office, but also through his appearances in television commercials. These days, he’s the logo for our Chipp Neckwear website, wearing one of our ties.

Unfortunately, Herman did have one flaw: he was a womanizer. No female – canine or human – was safe from his uninvited advances. He couldn’t help himself. He’d run up to women on the street and jump up on them and lick them. He’d stick his nose in their most private of places. What he did to female dogs was even more embarrassing. Some people brushed it off as “that’s what dogs do,” but it didn’t make things any easier.

As an aside, if you love dogs as much as I do, Chipp has some wonderful ties for every breed. I’m normally not one for animal motifs in neckwear, but ones representing family members get a pass.

* Note: Goes without saying, although Chipp is a sponsor on this site, this is not a sponsored post. Our editorial policies are pretty plain and simple, and can be read here.