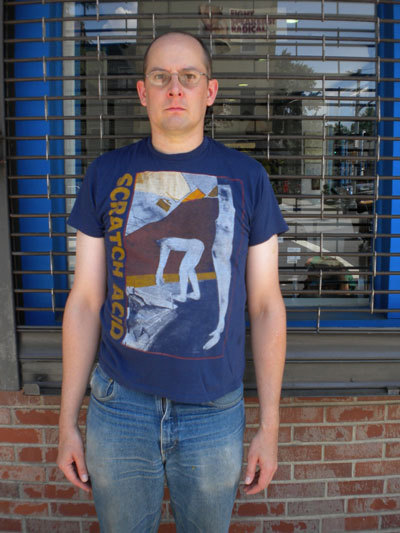 Joe Garden is an old friend of ours, and a brilliant comedy writer.  He’s been writing for The Onion since their Madison days, and created beloved characters like Jim Anchower.

That said, I don’t think even Joe’s mother would accuse him of being well-dressed.

In an attempt to address this issue (partially), Joe has started The T-Shirt Project.  He has a huge collection of t-shirts, and he’s decided to let The People decide which shirts he keeps, and which he sends to the Goodwill.  Our inclination would be to donate pretty much all of them, but we don’t get to decide.  That’s not how democracy works.  As we know, only a vote of the people can determine the truth.

So: check out the Tumblr and cast your votes!  A new shirt, every day!

Filed Under: Joe Garden, T-Shirts, The Onion, The T-Shirt Project