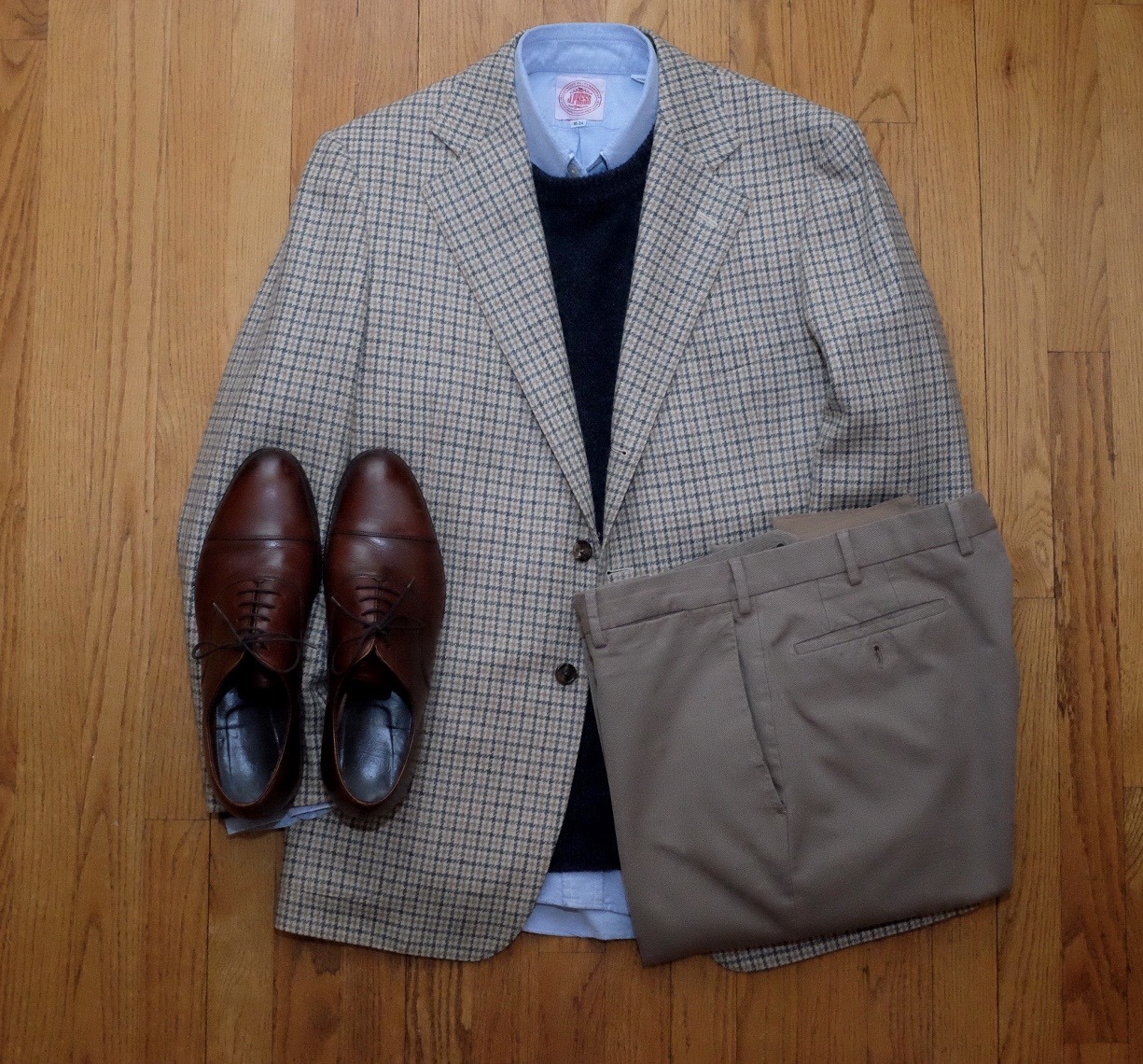 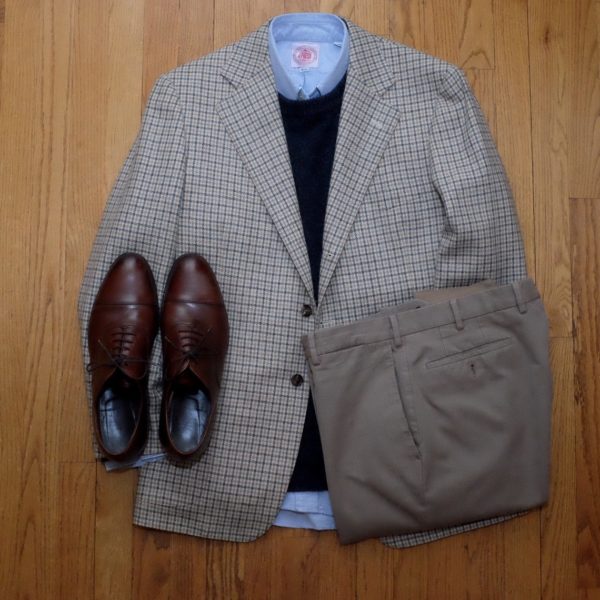 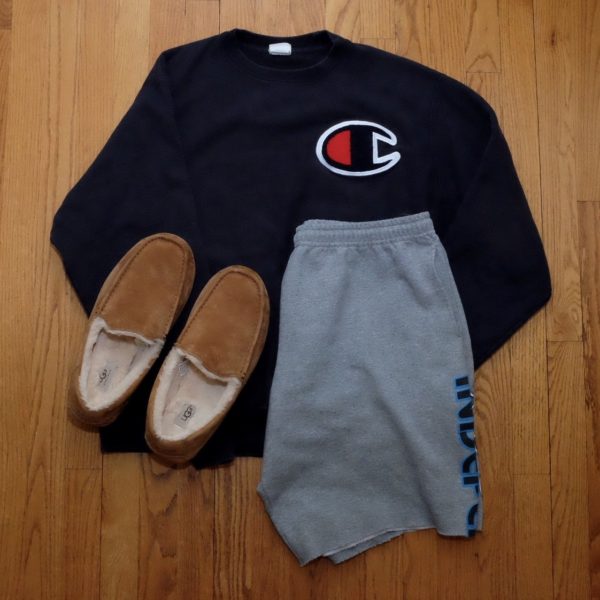 I’ve always paid attention to what I wear — I specifically remember the floral tie and pegged pants I wore to my first dance, where I awkwardly box-stepped with a girl, shout out to Junior Capers and the Tredyffrin/ Easttown school district–but I didn’t really think about it in relation to others’ clothing deeply until I started going to work. In a cubicle. Wearing a tie I stole from my dad.

Most weekdays since then (for over a decade) I’ve left my house in the morning to work in a traditional office, and worn what I’d like to consider thoughtful business casual. The boundaries of business casual are rarely clear and tend toward the khakis-and-polo side of things. As Derek wrote, “Not as interesting as casualwear could be; not as sharp as the traditional coat-and-tie. It’s just vanilla bland.” It’s one of those areas where we’re technically free to wear nearly anything but unwritten rules often keep us boxed in, or else we’ll raise the eyebrows of our Kirkland polo-d co-workers. I mostly wear OCBDs (lighter cotton weaves in summer), cotton twill or wool flannel trousers, and extra-casual sportcoats (like Engineered Garments or Camoshita might make) or a cardigan.

Last week, though, I started working from home close to full time. My new situation has a lot of benefits — I can access snacks at any time — but it’s made me wonder whether my business wardrobe is obsolete. I have a decent desk setup with natural light, I literally do not have to leave the house; who am I getting dressed for?

Of course, many men work mostly on their own terms, don’t have an office, and cope just fine. I asked a few guys who’ve been working this way for awhile how they approach dressing for the home office.

Mitchell Moss is an editor and writer working for a church in Cincinnati, but he lives and works in an older house outside of Nashville. He likes tailored clothing, mostly Italian, and doesn’t let the lack of a conference room and water cooler stop him. “I usually wear open collar shirt and sportcoat, and jeans or dress pants. I’m almost always in tailoring. That’s how I like getting dressed.”

So no sweatpants. “The slob thing? I cannot do that. Tailored clothing — it’s what I’ve spent money on for years, and didn’t buy it just to hang it there. Plus I get on instagram in the morning, and a lot of accounts I follow are in Europe, and have already posted cool outfits — it gets me excited about wearing a jacket again.”

In the two years he’s had this work style, Mitchell says he’s gotten more casual and wears ties less often. “I do wear jeans a lot more — almost every day now. Wearing a tie with jeans just feels weird. Part of my philosophy is trying to keep it real: ‘OK dude you’re working from home.’ I have a very strong utilitarian streak in me, I live in the real world — and there’s no point in putting wear and tear on nice pants.” Plus he does have to set up and break down for photo shoots sometimes, which is better to do in jeans, and shoes he won’t scratch.

What does he do in the summer swelter of the South? “At the extremes of the seasons, when it’s hot, I will forego a sportcoat. No shorts! Don’t quite go that far.”

The Approach That Changes Day to Day

Eric Cano runs a fashion casting agency — that is, he connects brands with the right-looking people for photo shoots or runway shows. Striking out on his own a couple of years ago after a long time working for a single company, he’s changed his style with his role and the shifting sands of men’s style. “I don’t have to worry about what I look like. I consider myself a fashion person, but on any given day I can kinda wear whatever I want. I don’t really have to put a suit on, which is a shame because I have so many.”

When he was in ad sales, wearing tailoring felt like it fit the role. “My uniform was sports jacket, woven shirt, nice pants, and shoes. I’d show up to meetings with Nike, it was kind of my calling card to be the guy in this market in a suit, meanwhile it was just a sports jacket. Asking a company to do a media buy, it would have felt funny showing up in a tshirt, jeans, and Jordan Is asking someone to spend that much money — a navy blazer justified what I was asking for. I don’t know, maybe people thought I was a narc.”

Now he balances his interest in fashion with the different demands he has every day: sometimes meeting clients or models, sometimes spending the day at his home office or co-working space answering emails.

“I want to be comfortable, and functionality is great, but I still want to look nice. When it’s my first time meeting someone other than email, want them to think ‘Oh, that’s what he looks like, that’s really sharp.’ Then next time we meet I’ll be in sneakers and a trucker jacket.”

When I talked to Eric (over the phone), he was in post-gym-wear — snow boots, sweatpants, and a bubble jacket. “I’m meeting people for dinner later, I’ll probably get out of the sweatpants. I’ll wear good jeans, a knit, nice shoes, and call it a day.” Eric, who’s in his 30s, told me he likes Dior Homme for jeans but also Levis 511s or 501s, recently picked up a shawl cardigan from Martin Margiela, which he’s been paying attention to, he estimates, since 2003.

Gus Walbolt works as an artist’s licensing agent and business consultant–selling his publishing business in the early 2000s afforded him the opportunity to set his own work style, which includes a couple of phone calls a day in his home in Walnut Creek, California. “Then off to gym; it’s one of the advantages of selling your company.”

While in publishing, he witnessed the casualization of the workplace in the 1980s and 90s. “When everyone still dressing up a lot, I still got questions– ‘Gus, why do you get so dressed up — it’s your company, you don’t have to dress up.’ But it’s all about showing style. In the 1990s my uniform was a double-breasted blue blazer, jeans while traveling, and gray flannels when I arrived. And I wore a tie. During that time, because we were selling art-based products, I felt it was important to project style. I thought it was necessary to show that I understood style in order to sell style and design.”

Nowadays Gus, who’s in his 60s, mixes his tailored taste with modern dressed-down looks, mixing the vibes perfected in global style capitals. “When I started working for myself, I started wearing what I wear today: American jeans, English shoes, and Italian shirts. Maybe LVC 1954 jeans, an Italian collared shirt, a casual sport coat — like Ring Jacket, Japanese made in an Italian style.”

In the last year, Gus has started to favor cardigans rather than sport coats all the time. “Cable-knit cardigans, maybe with pockets; not so much grandpa cardigans, a stand-up rather than shawl collar, with a scarf.”

“Every now and then, my wife goes ‘Everything’s so casual, don’t wear a jacket; can you wear something else?’”