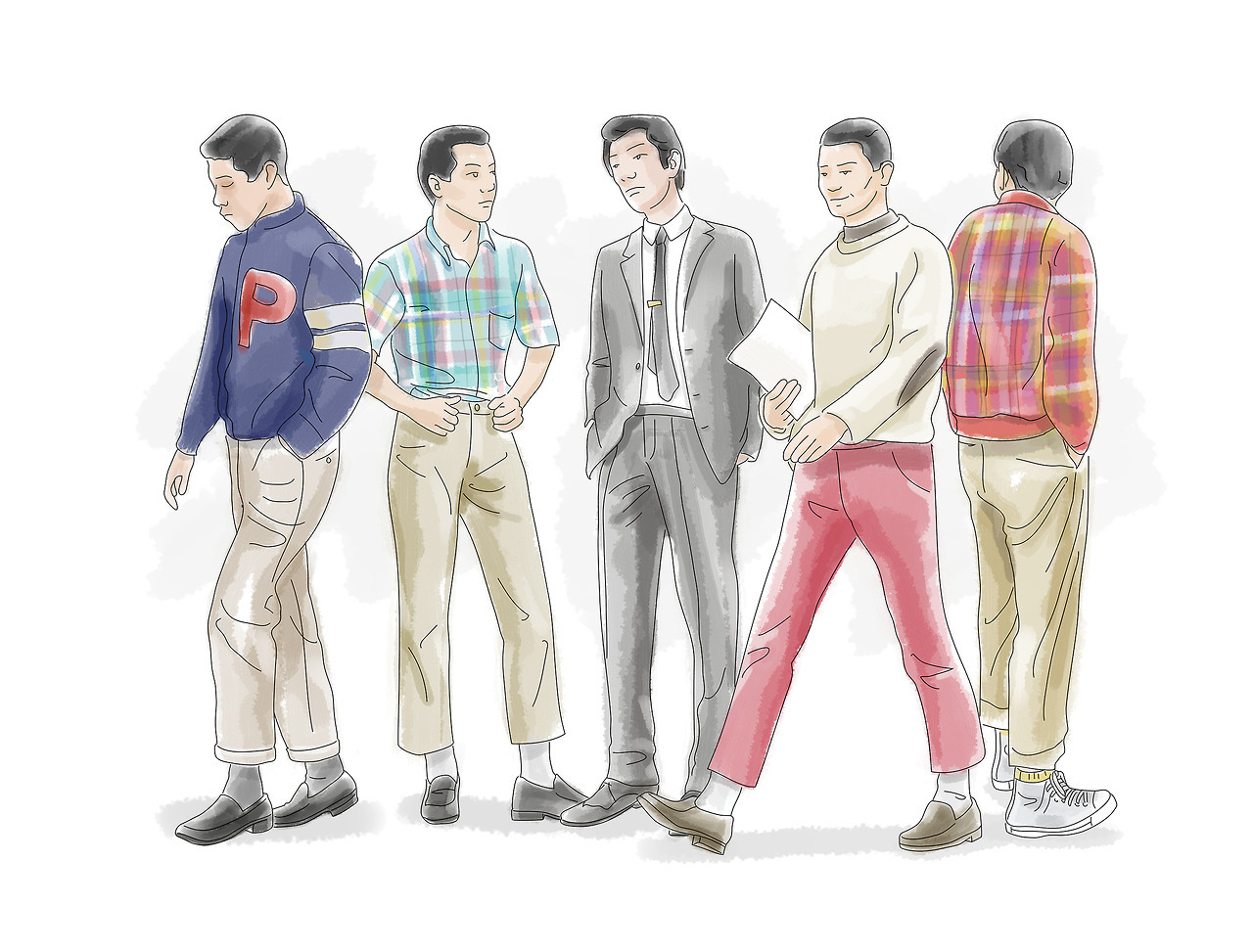 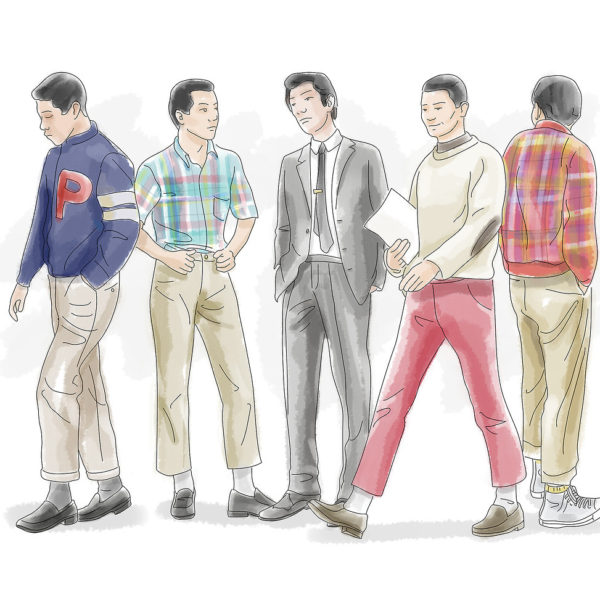 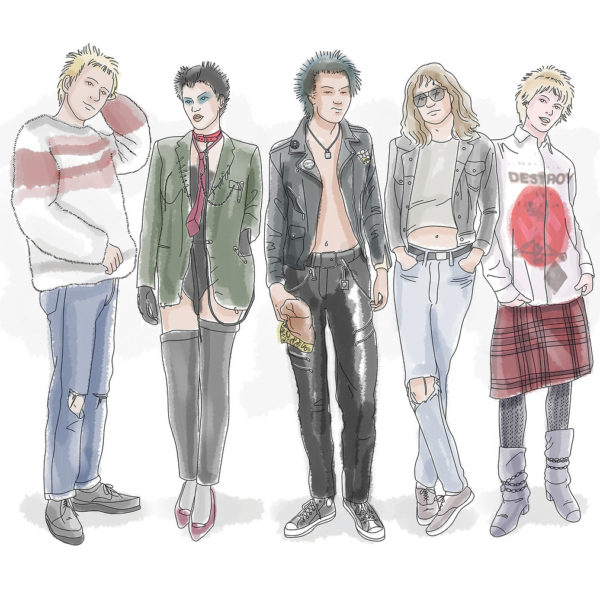 I grew up listening to a lot of punk rock, and sometimes I take it for granted that everyone I know is at least passingly familiar with the Dead Kennedys and Black Flag. I have to remind myself that, although some music breaks through to the monoculture, most of that stuff is niche, familiar to a relatively small group, and patched onto denim vests mostly by true believers. On the other hand, I know very little about jam band culture, or Juggalos (although I learned a lot from Nathan Rabin). While today you can pull up a ton of music across genre, subculture, and era on streaming services or Youtube, finding out the origins, aesthetics, and relationships among the groups–often young, often trying to forge an identity through music and clothing to stand out–can be tough.

Andrew Luecke and Greg Foley connect those dots with Cool: Style, Sound, and Subversion, their recently published book that serves as a chronological field guide to subcultures, with illustrated two-page spreads on groups from flappers to new age travellers (all of them are real, allegedly). Greg’s illustrations provide a great shorthand for the styles each subculture developed, and facts and essays place each in context of the broader culture and each other. Pictured above are Greg’s illustrations of the Miyuki-Zoku (early adopters of the Ivy League look in Japan) and punks.

The book rewards both casual flipping through and a full read, as threads and lines of influence emerge across time and geography. The authors and some special contributors also compiled playlists that vibe with the relevant eras and groups–contributors include Glenn O’Brien (no wave), A$AP Ferg (trap), and Peter Saville (glam rock).

I talked with Andrew and Greg about where the book came from and what subcultures, in their research, were the most interesting. Part II will post later in the week.

Pete Anderson: I was really impressed with the book. It’s like an encyclopedia for subcultures, giving the origins and time frames, music, and a really helpful and artful visualization.

Andrew Luecke: We did want to make it more than an encyclopedia, but at the same time we understand that’s part of the appeal of the book. Doing spreads for each subculture is just an efficient way to organize things and fit the maximum amount of information. And we wanted the book to be a real reference too. An encyclopedia is an efficient collection organized in a very specific way, from A to Z. COOL is organized in linear time. And I think one thing that works well for the book is that it serves as a number of different kinds of encyclopedias. It’s a visual encyclopedia where one can reference all these different looks, but at the same time, one can read deeper into the histories of these cultures, so it’s a written encyclopedia as well. And then of course, it’s a musical encyclopedia.

Greg Foley:  Since we’re streaming those playlists in partnership with Apple Music, the musical encyclopedia becomes a living thing, for people to interact with. I think, hopefully, when you combine all the different layers it adds some real depth. Also, with the infographic fold-out in the book, we made sure that the subcultures connected to one another in as thorough a way as possible, showing ins and outs, and long-term influences. Really trying to show a web of shared meaning. Infographics are an efficient visual reference, but if you want to really look at it, there’s some depth there.

AL: Plus we included some essays to try and tie everything together. But yeah, the encyclopedia thing is cool for me. I’ve always loved encyclopedias and textbooks and annotated things. So I like that aspect of the book.

PA: How did you team up for the work?

AL: Well, Greg is married to one of my best friends, and we were all at a fashion week party hosted by Esquire back when I worked there. Greg asked me what kind of book I would do if I could do anything, and I was like, “Well, I have this idea to do a comprehensive book on subcultures. I have a big list of like 100 I’ve been collecting for years.” And he was like, “I was thinking the same thing. I’d love to do an illustrated history of subcultures.” So it almost felt like it was meant to be, at least to me. I’m not sure why he asked me that, though. Maybe his wife Shannon urged him to? But, yes, we had very similar ideas separately. But yeah, that was about two years ago and I’d been making a list of subcultures for maybe two years before that with the serious intent of trying to do a book.

GF: Having helped start Visionaire and V Magazine as well as writing my own children’s books, I’ve developed a passion for publication. It’s something I enjoy sharing with others. I posed the question to Andrew because he’d never done a book before. So when he mentioned his list, I had a sense we could team up to pull off what neither of us might be able to do separately.

PA: Since many (but not all) of the subcultures are documented only lightly (there’s plenty out there on punk but maybe less on, like, new age travellers) how did you research this stuff?

GF: That’s one of the reasons we thought it was worth doing. Because most of the books on youth subcultures cover a few well worn groups.

AL: It’s funny that you mention that, because new age travellers was one of the toughest to research. I pieced that one together from like English government reports on the welfare of traveller children and, like, eight-year old set lists on some blog about a summer solstice gathering from, you know, 2008. Government sources like that can be hard to find, but are authoritative at least. I mean, there were some books too, but that one was hard. So we used a ton of online sources, both journalistic and less traditional.

GF: As we revised our list, we made a real effort to include international subcultures, especially beyond Western Europe and even Japan to some extent. But again, that only increased the challenge.

AL: Luckily, we also had full access to Parsons’ and NYU’s libraries since Greg teaches at Parsons. So we could access academic journals and harder-to-find books too. Because we were dealing with some non-traditional source materials sometimes, I triangulated the information for anything in the text. If three sources confirmed the same thing, that made me feel confident about including it.

GF: We did that with the photo research for the illustrations too—made sure we had multiple sources.

PA: How did you determine who made the cut?

AL: Well, one thing we found in researching this thing, is that defining what exactly a subculture is, can be tough. They all have blurry borders and overlap with other cultures and all sorts of other things. We did have a few rules though.

GF: We didn’t include religious or cult groups, though religion obviously played a part in some subcultures we included. We also didn’t want to feature, say, a specific gang, like the Hells Angels or something.

AL: But we included bikers, so another criteria was that these things had to be broad and extend beyond individual cliques or groups. They also had to have some subversive element to them—even the American college kids of the 1920s—who might not seem subversive on the surface, were redefining the rules for dressing, totally rebelling against their parents’ formalities, which were really rooted in a pre-World War I Victorian thing and bringing athletic wear to the streets and stuff. And throwing keggers and being a bit wild.

GF: Also groups had to have visually cohesive elements. They had to look like a subculture when I grouped up the reference images.

AL: Lastly, we started in the 1920s, because the overlap with mass media was so important. Particularly the record industry and radio, but also magazines, movies, and later TV. Even advertising played a role in this push-pull of rebellion and marketing. That stuff really exploded in the 1920s, and really fueled and interacted with these subcultures.

PA: Are there any you left out you would’ve liked to include?

AL: Yes, bike messengers and that punk-hippy tall-bike culture. I couldn’t believe we left them out. I think I did it subconsciously because I had some negative run-ins with bike messengers when I was a younger man.

GF: At certain points we considered how many of our groups revolved around vehicles. I’m sure bike messengers would have looked great but ultimately it’s a job, and maybe vocational uniforms are another book.

Stay tuned for more from Andrew and Greg in part II. Greg designs and creative-directs Visionaire, and Andrew is a professional trend forecaster and style editor.