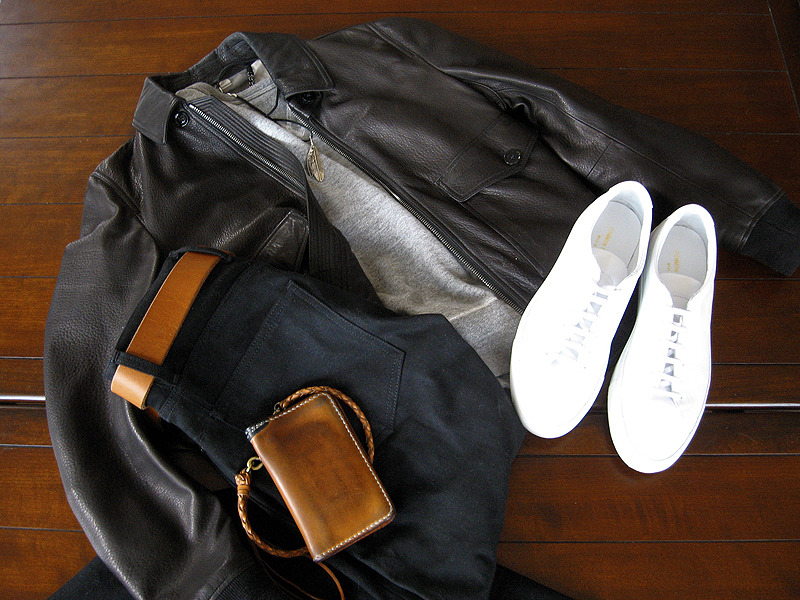 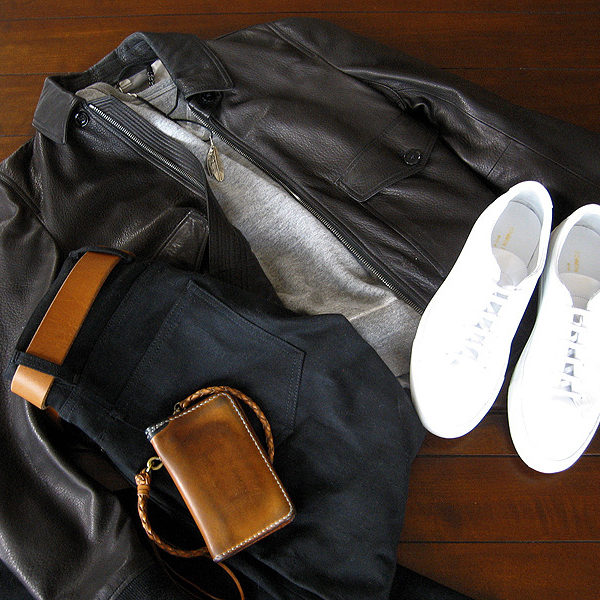 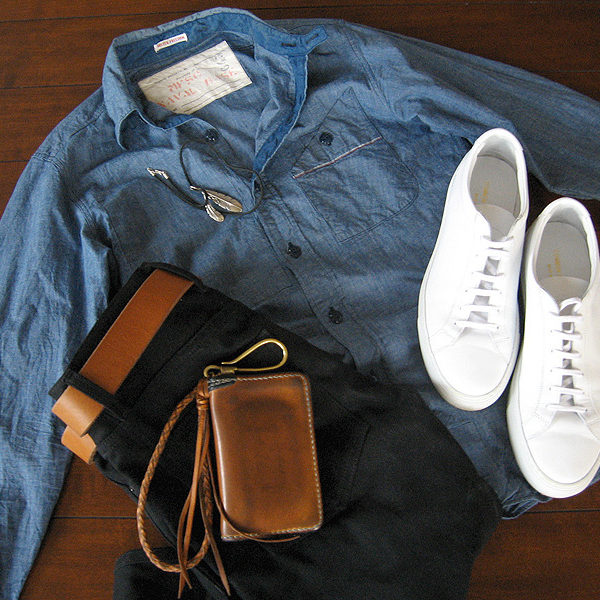 I wear “tailored” clothes about half the week (i.e. sport coats, dress shirts, wool trousers, and the like), but for the other half, I dress pretty casually. Lately, that’s surprisingly meant black jeans. I off-handedly mentioned on Twitter once that I’d like to get a pair, and Andrew at 3sixteen kindly offered to gift me one of theirs.

I received them about a year ago, and admit they sat untouched in my closet for a while until I figured what to wear with them. Once I found some combinations I liked, however, they’ve been in regular rotation at least once or twice a week. On cool days, I like to wear them with a heathered grey sweatshirt and slightly pebbled, black leather A-2. For warmer weather, I swap out the sweatshirt for a grey or white t-shirt, or ditch the jacket completely and just use an old chambray. I find golden tan leather accessories – such as wallets and belts – tend to work better than dark brown. White sneakers make for an easy pairing, but I’ve come to like black boots and sneakers as well. And, for what it’s worth, I’ve found that I like the legs a bit longer, so they “stack,” rather than having them cuffed like I do on my indigo jeans.

As many readers know, denim, like all fabrics, is woven with yarns running lengthwise (known as the warp), and transverse threads running the width (known as the weft). Typically, the blue warps are the first to “give out,” which is why good denim fades to a “streaky” white/ blue color over time.

3sixteen uses this fact to achieve different effects in each of their four black jean models. Their “Shadow Selvedge,” for example, has indigo warp and black weft yarns, which mean they start out looking black(ish), but fade to a beautiful high-contrast blue over time. The “Black Two Tones” are made with a black warp and white weft, so it behaves similarly to a “regular” pair of jeans. And the “Black Hexes” and “Double Blacks” (the second of which is what I have) use black yarns for both the warp and weft, which means they’re more resistant to fading, but eventually turn to a really nice grey with enough wear.

Each model is cut in their standard slim tapered (ST) and straight legged (SL) patterns. And, like the rest of their line, everything is made in the USA from an exclusive fabric they have woven for them by Japan’s Kuroki Mills. (This is notable because many companies use the same fabrics as everyone else). There are also nice details, such as custom detailed buttons, gunmetal rivets, and a uniquely high-quality leather used for the back patch.

Casual wear today largely means jeans and chinos, and in some circles, it can even mean just jeans. Style enthusiasts have written a lot on the usefulness of white and light blue denim. I’d add black to that list. They’re a bit “edgier” than the other two alternatives, and give some appreciable diversity to a genuinely casual wardrobe. They also make you look much tougher than you are, which is useful if you’re a grad student who spends his free time blogging about how people can look much tougher than they are.