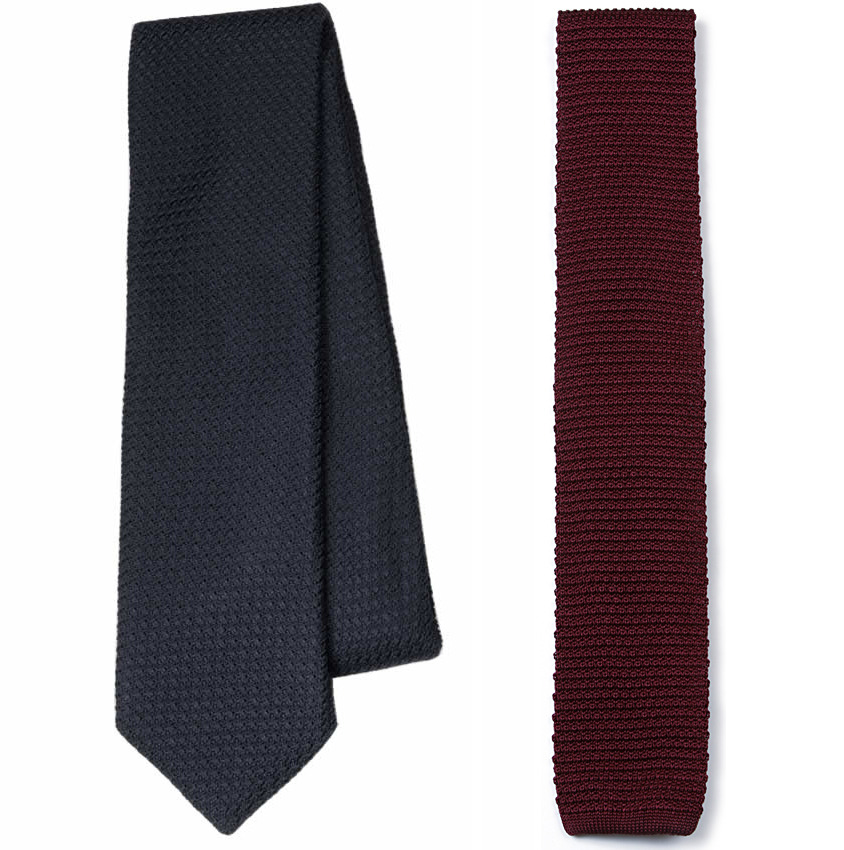 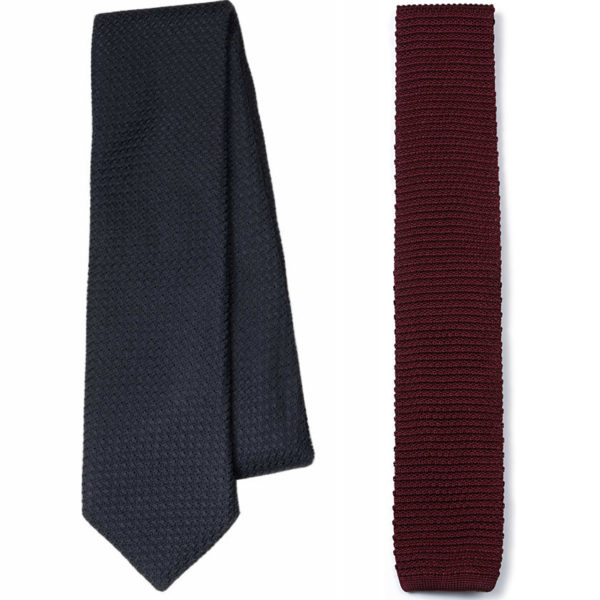 The Knottery, a relatively new entrant in men’s neckwear, recently sent me two of their ties to review. The package came last week and in it was a solid navy grenadine, which is part of a new collection of grenadines they’ve just introduced, as a well as a solid burgundy silk knit.

The silk knit is straightforward enough. Whereas regular neckties have more complicated constructions, silk knits are simply woven on machines either in tubular constructions or attached through a seam at the back. The ones at The Knottery are three inches wide and made in the first method (tubular). Some men prefer this because without the seam, you don’t have the small bump going down the back, which in turn won’t bulk up the knot. I personally have never had a preference either way. What I do think men should consider, however, is the material and weave that the knit is formed in. Silk, cotton and wool will obviously create different looks, and each can be woven in a different weave. One only needs to compare the silk knits at Drake’s, J. Press, and Land’s End to see what I mean. None are better than the others, but they do serve different tastes. If you like the material and weave at The Knottery, these seem like a decent value at $25.

The grenadines are perhaps a bit more exciting. With the exception of Chipp2, I don’t know of any other retailers selling grenadines for under $60. The Knottery’s are $55, three inches wide, and made from the same silk grenadine fabrics that all the other high-end makers use (with the exception of “mock” grenadines, I believe there are only two sources for “true” grenadine fabrics, and both of them are very good). They are also constructed in New York by a very well respected American manufacturer (I can’t reveal who, but they’re well respected).

Perhaps their only faults are that they’re made with a 50/50 polyester-wool interlining, which means that the tie won’t relax as easily after a long day’s wear, and that they’re machine made. Normally, with high-quality wool interlinings, you can hang your tie up for a night and the wrinkles will naturally fall out. This is a bit more difficult with blends. The machined seam at the back also seems a bit tight, which I admit makes me wonder about the tie’s longevity. On the one hand, numerous high-end makers have told me that a slightly looser slip stitch is essential to ensuring that the tie has enough give when it’s being wrapped tightly around a neck, and can return to its original shape when it’s unknotted. On the other hand, before wearing handmade neckties, I wore mid-tier, machine-made ties from department stores for years, many of which had these tighter stitches, and none of them snapped. Their only problem was that they looked a bit lifeless and failed to give a good dimple when knotted, but none of these are issues that The Knottery’s grenadines suffer from.

Outside of those concerns, the rest are just preferences. My favorite grenadines are from Drake’s, Sulka (now defunct), and E.G. Cappelli, all of which are lightly lined. The Knottery’s are a bit heavier, but not as heavy as my grenadines from J. Press. They also have a slightly peculiar feel when you rub the fabric between two fingers – a feel that’s not too unlike rubbing the fabric of a silk knit together, which doesn’t happen with any of my other four-in-hands. Not better or worse for it, mind you, just different.

Of course, some may wonder how these compare to Chipp2’s grenadines, which are the other affordable option on the market. I admit I like Chipp2’s lighter feel, pure wool interlining, and hand construction, but I dislike that their outer fabric (the silk) is somewhat loosely attached to the interlining itself. The Knottery’s are built like all of my other grenadines, with the brushed interlining staying close to the silk, and I think it gives a more handsome dimple. They’re also easier to order from, though some might find charm in Chipp2’s slightly roundabout process. Perhaps most importantly, Chipp2’s are made from garza fina, which have a fine weave, whereas The Knottery’s are garza grossa, which have a slight honeycomb like appearance. Again, purely a matter of taste, but I generally prefer garza fina with suits made from smoother, worsted wools, and garza grossa with more informal jackets.

Either way, for those on a budget, you now have two sources to get an affordable grenadine – Chipp2 and The Knottery – both of which offer decent options.