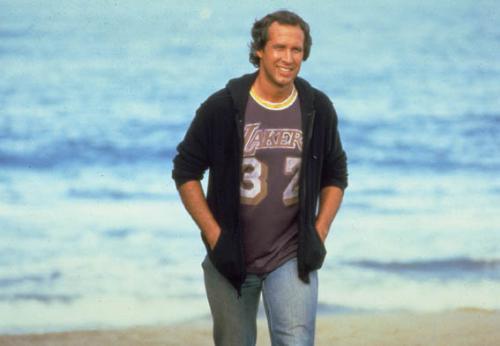 The vast majority of modern men’s clothing can be traced to two sources: sports and the military. But while many if not most men own and wear button-down collars, bombers or field jackets, baseball caps, and sneakers made for the track or the court, wearing an actual jersey seems to announce that you are either (1) a truly dedicated fan who values team allegiance above appearance (borderline facepainter) or (2) about to actually participate in competitive gameplay. So, given that wearing a jersey, in team colors, with a number on it, outside of a sporting event context, is inherently not Put This On approved, which sport’s uniform comes closest to unridiculousness?

5. Basketball—I put the title question to Jesse and Derek, and Derek’s pick was the basketball jersey, which shows that Derek and I are very different people. The obvious problem with many jerseys is they’re designed to be worn by athletically built guys. Maybe more than other sports, wearing a basketball jersey, if you don’t otherwise look like you ball, just draws attention to the vast gulf between you and a tall person in good shape. By you I mean me.

Spike Lee as Mookie in Do the Right Thing. See Clothes on Film for more on costumes in the movie.

4. Baseball—With buttons (usually), sleeves (usually), and a history going back to the 19th century, the baseball jersey seems to have the most going for it for modern casual wear. The concept of the baseball jersey has even worked it’s way into casual clothing in the last couple of years. But real jerseys are long and meant to be tucked into baseball pants (which are the basketball jersey of pants), and they often have broad, low necklines. Like other jerseys, they can be meaningful to the wearer and your choice of team and player can connote a lot, but they’re almost universally unflattering. And look at poor, poor baseball managers. What if baseball managers still dressed like Connie Mack?

3. Football—Even as football jerseys have gotten tighter and stretchier, they’re still built to accommodate a medieval-knight-load of pads, body armor, flak jackets, etc. Wear one over a tshirt and you look a few PSI short of recommended inflation.

Jimmy Fallon wears a “sweater” over a shirt and tie. Not recommended.

2. Hockey—You’d think a jersey also known as a sweater would be a good fit for casual wear, but like football jerseys, they’re just not made for natural shoulders or unpadded frames. A shame, since hockey features some of the best-designed jerseys in sports–and arguably the most consistent over time (dare I say timeless). Great colors, lots of stripes, and excellent typefaces. Some guys make it work.

Colin Firth and Mark Strong get comfortable in Fever Pitch.

1. Soccer—In cut, soccer jerseys are closest to a shirt you’d wear otherwise. I mean, it’s a tshirt. With a vneck. Sometimes. They fit normally, they don’t need to be tucked or fussed with, and they rarely feature cartoon mascots. Wearing one in the United States marks you as a natural contrarian. That makes the soccer jersey my pick for least ridiculous jersey. Of course, as Jesse mentioned, soccer is the most ridiculous sport (in the US! in the US!). And the NASCAR-level branding of many of today’s jerseys is a yellow card.

Bottom line: Much like wearing your best suit to the ballpark would look out of place (not to mention invite mustard stains), wearing a jersey beyond bro hangs and sports arenas is usually unwise. Or still frowned upon. But then, what isn’t, these days?