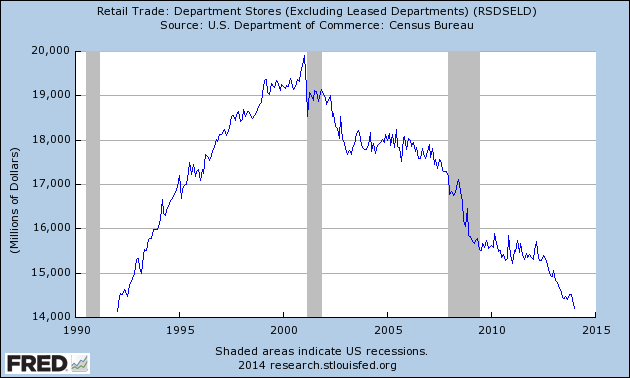 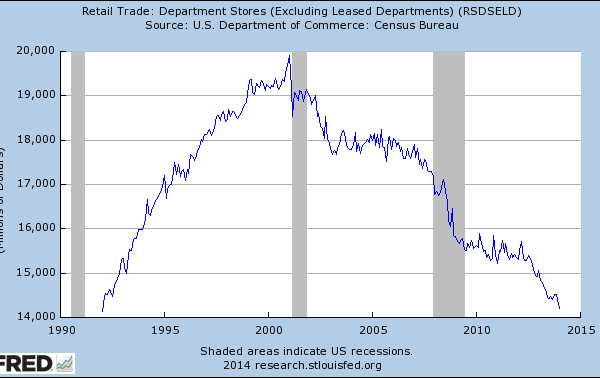 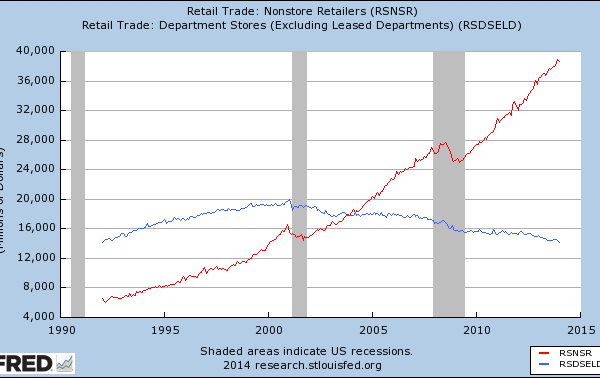 The one blip in this is clothing sales, which grew slightly by 1.2 percent in the last year, suggesting that people are still going to department stores to try things on. I imagine much of this is because of womenswear, which is harder to size right online. But this is just a hunch. In either case, companies such as True Fit and PhiSix are developing technologies for “virtual fitting rooms,” which might make real fitting rooms less important in ten years.

Some things not discussed in the post are the implications of this shift. For example, the New York Times had an interesting article two years ago about how online shopping has made customers more sensitive to the pushiness of sales associates. An excerpt:

Self-service has long infiltrated the consumer experience, most recently with self-checkout at grocery stores. But the biggest factor affecting attitudes toward salespeople may be the amount of time people spend shopping online, which tends to be a solitary experience. In 2011, online shopping on Cyber Monday was up 22 percent over the previous year, according to comScore, which tracks Internet traffic.

“The element of control, by contrast to the salesperson service experience, is attractive,” said Ravi Dhar, a professor of marketing and psychology at Yale. “You feel like you’re in control of the entire experience, and people like that. There is this notion for the millennial generation that they don’t quite like the style of salesmanship that was going on, since they were raised on online shopping. But it might be becoming true for a larger group of people.” […]

“This distancing is so serious today that some customers walk into stores and hold their hand up and say, ‘Just looking,’” said Mr. Shanker, who said he has trained the employees of luxury stores like Ralph Lauren, Burberry and Van Cleef & Arpels.  […]

“We see the customer with their earbuds in” who does not want to be approached by a sales representative, Mr. Costino said. “Some shoppers don’t want that kind of service, especially the ones we see who have done their pre-shopping online.“

The other possibility – one that I have a gut feeling about, but no real evidence for – is that the shift to online shopping will eventually affect how companies design and market clothes. Whereas you can handle things in department stores, online shopping is mostly just about words and pictures. Presumably that’ll mean that designers will have to use design details that you can easily see, rather than rely on subtle things such as the feel of some fabric. Think of the difference between the drape of a heavy 50oz silk twill tie or the chalky hand of an ancient madder versus the more “obvious” textures of raw silk that menswear enthusiasts seem to favor today. I also recently handled some plain cotton sweatshirts from Maison Martin Margiela, which were really remarkable to the touch, but looked rather plain and boring in photos. True indeed, those ended up being discounted much more than Margiela’s more “visually interesting” pieces last year.

And without the ability to handle items in person, and get a real up-close view of their quality, perhaps we’ll see brands rely more on “stories” to market their goods. The telling of stories, after all, has been at the heart of the “heritage movement” for the last ten years.

So that no one accuses me of being a Luddite, it should be noted that online shopping has also made it possible for us to buy a much wider selection of items, and get things at cheaper prices. But like the trend of declining department store sales, you likely already knew that.