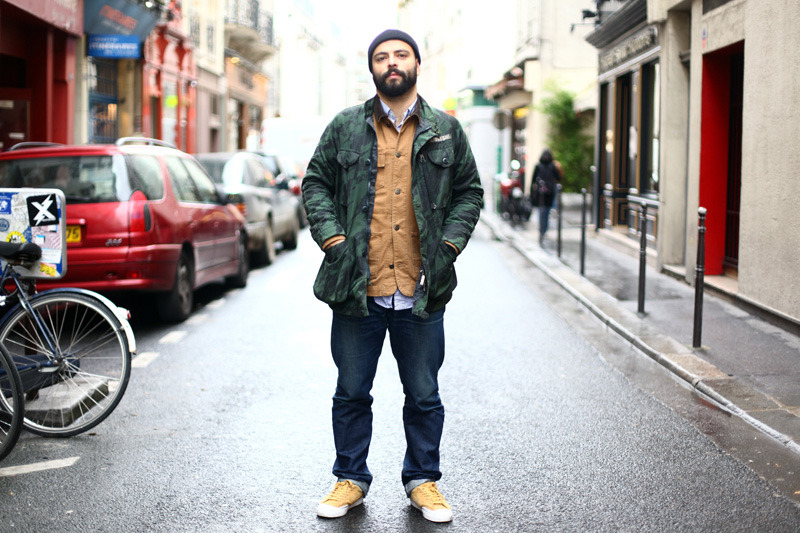 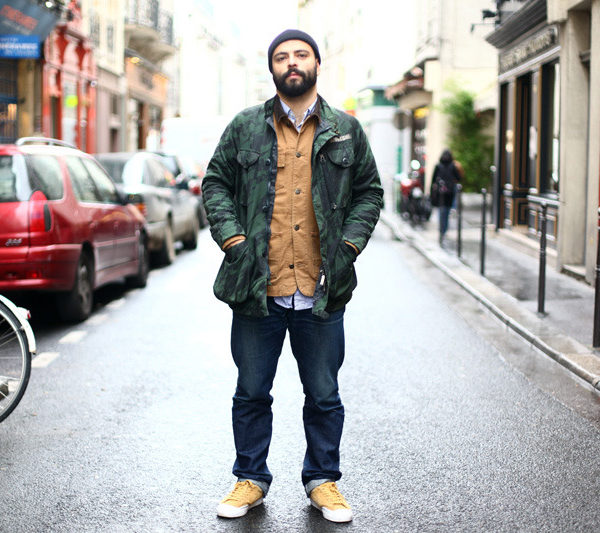 Following up on Derek’s post yesterday about getting creative with a casual wardrobe based on workwear archetypes, I wanted to write a little about what remain some of my favorite brands, the ones that continue to make durable, inexpensive clothing for workers. Lines like Dickies and Carhartt, while they occasionally make gestures in the direction of fashion (usually to try to catch up to the cool kids wearing their gear in unintended settings), focus on making practical clothes that the wearer really won’t think about much. Unless you’re like me and spend as many hours searching eBay for classic Carhartt as doing manual labor most weeks.

There’s a reason many of us look for, say, Dickies collaboration pieces rather than real Dickies. Or “takes” on workwear from brands like Engineered Garments or Orslow. We’re used to seeking out clothing cut to flatter and made from comfortable, interesting fabrics. Those are not qualities you generally find on a rack of Ben Davis Gorilla Cut pants, for example. And I admit that the durability of real workwear is overstated. Brands tend to brag about toughness but a lot of this stuff is more disposable than anything. When workwear makes trade-offs among well-made, good-looking, and cheap, it usually values cheap.

Still, as with vintage, there’s a particular satisfaction in taking something designed with little aesthetic concern and fitting it into your wardrobe. It’s also fun to track down the sources for the modern versions of workwear we like, and to consider how others have taken workwear out of its clock-punching context and made it their own. I’ll stop short of saying it feels authentic because any authenticity here is thoroughly borrowed.

Carhartt’s signature achievement is their use of brown “duck” fabric for pretty much everything–from hats to jackets to overalls. In my opinion brown duck (really more of a tan) is a great neutral and a sollid match with other things we like, especially in fall–blue oxford cloth, shetland sweaters, denim, olive drab ( see lead image on this post). The Carhartt piece I wear the most now is a blanket lined chore jacket–I think it’s the same model Brian from Wooden Sleepers mentions here.  But I’ve been meaning to get a pair of overalls. Carhartt has a decent “fashion” line as well known as Work in Progress (WIP).

As with many other workwear brands, with Carhartt I often size down on shirts and jackets and up on pants. Jackets fit big to accomodate layers and movement; on the other hand, pants are not vanity sized, so rather than squeeze into the waist of my “usual size” I’ll buy a size up. The pants aren’t going to fit trim either way.

Dickies have been everyone’s go-to cheap pants forever. Around since 1922, today the brand make a ton of legit workwear for many professions, including hi-visibility stuff for road work and medical scrubs. But most guys know them for the 874 work pants, a cotton blend chino that’s, frankly, as stiff as it is cheap (currently $19.99)–recognizable in part because of their wide belt loops and slide, rather than button, closure. You might spend more than $20 getting them hemmed at the dry cleaner, maybe one reason it’s sometimes been considered standard to just cut them off at the ankle (every time you cut off a pair of Dickies, Johnny Knoxville gets a $0.16 royalty check). Dickies have also long had a presence in hip hop/streetwear scenes, and have a number of well regarded collaborations in fashion, including with J. Crew and Sasquatchfabrix.

I like the khaki color and the Air Force blue–they’re a nice alternative to denim. Although they’re lighter than denim, the fabric blend is not, in my opinion, the most comfortable in hot weather. As with Carhartt, I suggest sizing up a little on the pants, and getting them tailored to fit, like Chris Gibbs, or DIY-ing it. Unless you opt for a stretch model, Dickies don’t have a lot of give.

Although I’ve lived on the east coast all my life, I’ve always seen Ben Davis as sort of the West Coast-exclusive Dickies. We just didn’t see BD pieces around much growing up (which made them somewhat more desirable). Their pants (especially in the “gorilla cut”) have a rep for being a little baggier than Dickies–somewhat hilariously, they don’t make lower than size 30 waist in pants, and no size small for shirts. BD shorts, worn baggy and clean, often with high socks, are historically a mark of California gang style. Ben Davis are also known for their zip work shirts, a style I find a little hard to wear. Famously, Dr. Dre in 1992′s Let Me Ride video selects from a closet full of black Ben Davis shirts.

Like many of these brands, Ben Davis benefits a lot from having a damn cool logo. Coincidentally, I learned a lot about many of these brands from writer Gary Warnett, whose site’s logo is a Ben Davis logo flip, and there’s allegedly a connection between the logo and that of X-LARGE, one of the first modern streetwear brands. Like a lot of American brands, BD has an entirely streetwear based presence in Japan. They also recently collaborated with Opening Ceremony.

Turns out people outside of the US do work, too. The stuff I’ve handled from French label Le Labourer–best known for work jackets and corduroy pants–is heavier and more refined than most of the American stuff discussed so far–of course it’s still made in France and not QUITE as cheap. Most of the American brands have offshored most or all of their manufacturing. A moleskin LL jacket will run you about $100, a wool one nearly double (I have this one myself). These are straightforward, unlined jackets, but they make for great outer layers in the fall and winter. Le Labourer is also known for making jackets for Junya Watanabe’s MAN line, which are a little trimmer and wilder–haven’t seen these widely available for a few years. LL makes some wild high-waisted, buckle back trousers but I’ve yet to track a pair of these down. This stuff has a more country feel than the American brands, and less hunting (like Carhartt) and more wandering fallow fields.

Le Laboureur outerwear is sized numerically. I’ve found that a size 3 fits me best (although not trim), and I’m usually a L in American brands. So, generally, size 1 is a small, 2 a medium, etc.

Expect more budget friendly workwear profiles from us next week.