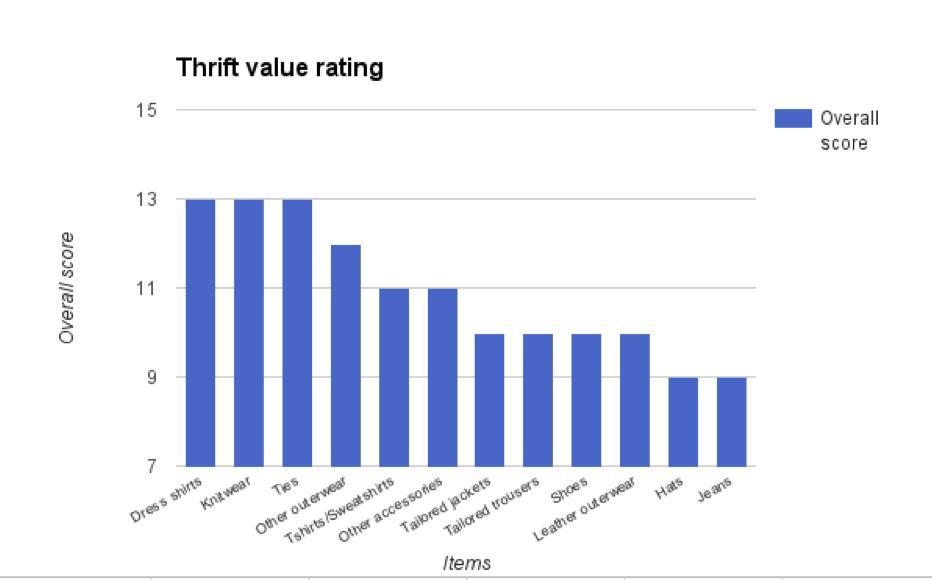 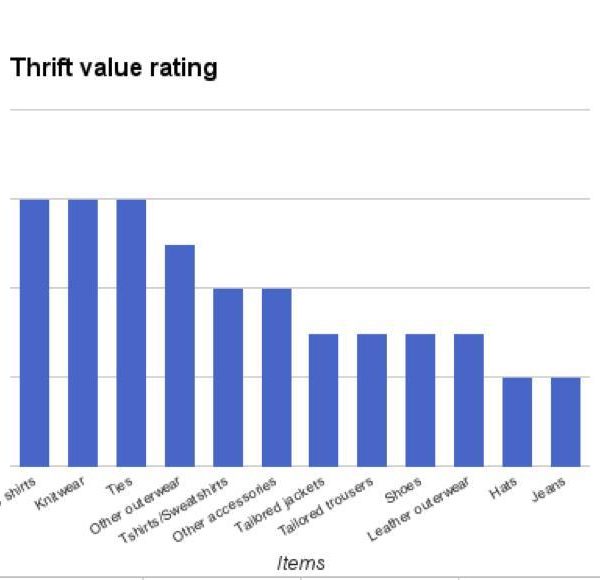 Thrift stores and eBay are the perfect place to find rad men’s clothing. Certain rad men’s clothing, anyway. Continued from yesterday, when I gave you the run down on some of my favorite things to buy used, today I address vintage cotton sportswear, accessories, and tailoring. See the lead image above for my overall scores (out of a max 15) across 12 categories, judged on the value of what you can get vs original retail prices, the ease of finding the good stuff in each category, and the potential that what you buy will be gross.

Depending on your taste, there’re plenty of knit cotton shirts out there for the taking. Vintage Champion reverse weaves, for example, are bulletproof and super heavy and all over the place. They’re not going to be far cheaper than retail for a new sweatshirt or tshirt, but that’s because the new ones are so cheap–the old ones are often better made and nicely broken in–especially poly-cotton blend tshirts. Of course people wear tshirts against the skin and sometimes wear sweats pretty hard, so condition can be a problem. Stuff that’s not obviously stained or stinky you can wash thoroughly and not really think about again. Maybe I’m corny but the best fits, for me, are not ironic slogan pieces or specific brands, but shirts that may have some meaning to me–band shirts from groups I was into years ago, sports tees from my hometown or college, that sort of stuff.

Jewelry, watches, and belts are relatively low risk items to buy used (unless you’re shopping for very nice watches). Stick pins, pinbacks, and cufflinks are easily cleaned–if you like what you see, there’s not a lot of chance that damage lurks underneath.

It’s hard to make a blanket statement on tailored clothing–on one hand, some very well-made used tailored clothing sells far below retail on eBay and at thrift; on the other, in order to wear a lot of that you have to (1) spend significant money tailoring it and (2) sometimes commit to a certain “vintage” look. When it works, though, it works very well.

Likewise, men tend to treat their suits and sportcoats pretty well, but also hold onto them for awhile, so while the market can be flooded with tailored clothing from respected lines like Polo, Canali, or Brooks Brothers (or even bespoke houses), a lot of that stuff is going to be from the 1990s, for example, and will still look dated after tailoring, even if your alterations tailor is good. You can’t change the shape of a lapel much, and unpadding shoulders, while possible, can be a risky and pricy operation. eBay and thrift finds can be very tempting because tailored clothing is sometimes the most expensive stuff in your closet; just be careful not to spend your limited budget on something that will never quite be what you want. If you’re actively seeking clothing from an earlier era, and can identify that stuff, have at it!

Tailored trousers–like wool flannels or corduroys–are an equally risky proposition. Like jackets, they’ve often been separated from the other half of their suit, and some fabrics–like fine wool weaves in charcoal or navy–are always going to look like part of a suit. I like to look for more rustic fabrics like tweeds or cords.

Some styling choices from decades past–like deep pleats and wide legs–are hard to modernize with alterations (it’s almost always inadvisable to remove pleats).  Again, you can embrace those looks if you like, but don’t expect vintage tailoring to be something it’s not.