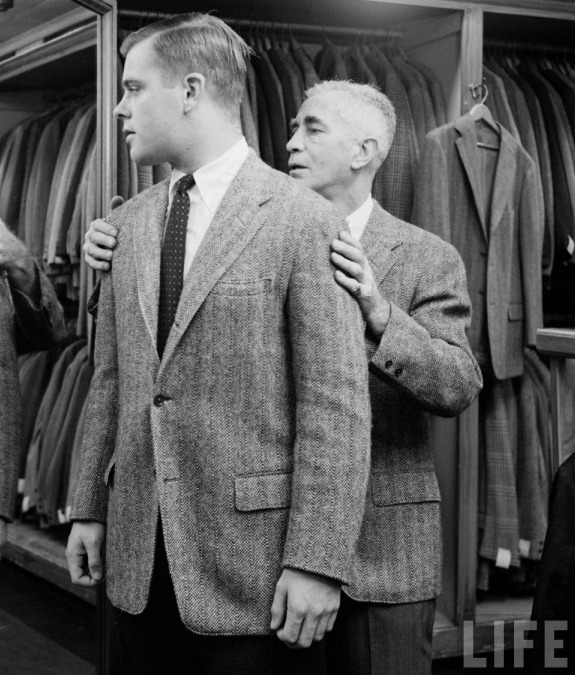 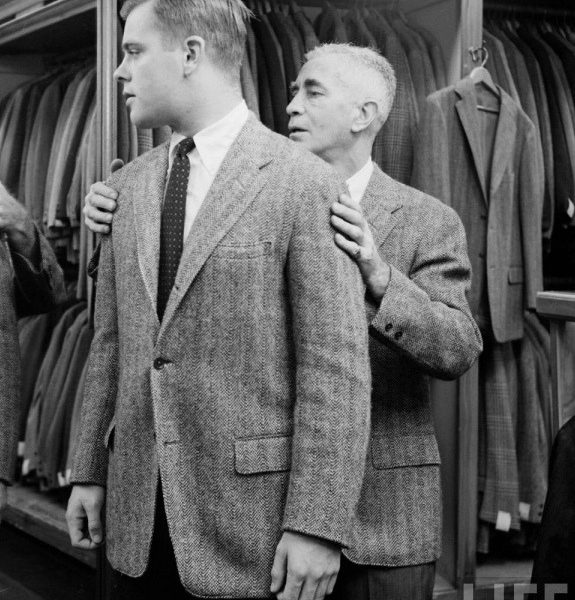 Ivy Style somehow tracked down the man you see above. In the photo, when Life Magazine shot him for a 1954 issue that featured J. Press, he was being fitted for a soft shouldered, 3/2 roll, tweed sport coat. The photo has circulated forums and blogs for many, many years now, making it a famous image that every guy interested in classic American style has seen – oh, I don’t know – maybe a 1,000 times.

Apparently, the student originally came in to be fitted for his custom tailcoat. As Ivy Style reports:

It was the fall of 1954 when a simple errand put him on a collision course with Ivy style history. “J. Press, or J. Squeeze as we called it, was the New Haven substitute for Brooks Brothers,” says Brown. “Best I can remember was that I had walked in to check on tails they were making for me.”

Many Ivy devotees have mooned over the jacket he is wearing in the photo. “I don’t think I bought that jacket,” Brown recalls. “As I remember, they wanted to feature it and it fit.”

The tailcoat he’d commissioned was another matter. It saw plenty of action during the debutante season. “There were a lot of great coming-out parties with lots of alcohol, legal then,” he recalls. “I remember rolling down the hill of John Nicholas Brown’s daughter’s coming-out in those tails, to the breakfast tent at 2 AM. That house is now Harbour Court, the New York Yacht club station in Newport.”

There was a time when some undergrads commissioned custom tailcoats to get drunk at parties! You can go over to Ivy Style to read the whole thing.