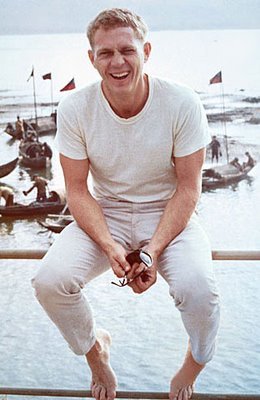 Here’s the deal: the Alternative Apparel white crew t-shirt is my t-shirt of choice.  The fabric is as good as anything else on the market, including $60-100 designer t-shirts from Barney’s.  It’s significantly better, in my opinion, than American Apparel.  I really like it.  The cut is long enough for most folks to wear as an undershirt, short enough that it doesn’t look silly on its own.  It’s slim, but not exaggeratedly so.  It’s also outrageously soft.  I wear them on their own, and as an undershirt.

We’re going to do a group buy of these awesome shirts.  The shirts retail at $19.99 each, so I thought we’d offer them for a little less than half that – $9.90.  We can get wholesale pricing on a large order, which lets us get them to you cheaper.  Shipping will be five bucks, flat.  We’re offering crew and v-necks – I don’t want you people showing your underwear when your collar’s open.

As in the past, it will work like this: you place your order by Wednesday at 4PM pacific.  Then we stop taking orders and put in our order with Alternative.  When they show up a week or two later, we ship them out.  You get them in about a month.  Continental US only.  Sound like a plan?  I recommend you just buy half a dozen so you’re set for the year – I’ve got more than that, to be perfectly frank.