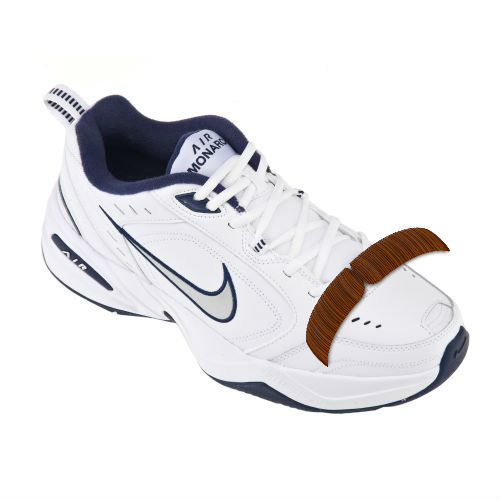 The nostalgia cycle ensures that things that were once cool, that then seemed dumb, will one day rise again, harder and stronger, and probably in a rapidly gentrifying borough. Light wash jeans once eclipsed raw indigo as the standard for cool kids, then light wash became dad jeans, and yet somehow, they returned, despite dad status. The downfall of many a trend is being noticed by middle aged dudes.

But what about things that were never intended to be cool in the first place? The Nike Air Monarch, while allegedly not in fact handed out in maternity wards to new fathers, sneaks into their closets as kids reach school age and often becomes their only shoe–practical, thrifty, unassuming, and hopelessly uncool–like dad. Obama (America’s dad) isn’t wearing a pair in his infamous bike photos, but he should be. So what in its DNA makes it such effective dad-bait? The designer of the modern Monarch, Jason Mayden, talked with Nice Kicks awhile back about how he made the shoe.

The Monarch II hit all of the factors that men really loved from the comfort, to the width, to the colors, to the materials, to the price point. It was like, that was it, we nailed it – we had the Sunday shopper’s most favorite shoe.

[The sneaker industry] has become so driven by fashion, struggle and melancholy, and these things that are based on dystopian futures. The Monarch is about a shoe that is happy, that is involved, that most likely has a mustache with no beard that loves Miller High Life, relaxed fitting denim, and a BBQ in the backyard.

The Monarch really checks off all the dad requirements–it’s got the swoosh and “AIR” right on there, reminding him of his athletic glory days, but it’s not aggressive, not overpromising; it doesn’t claim he can still dunk. Primarily white (”White shoes make you look fast!” -dads) with tastefully distributed accent color, it goes with everything and everywhere he won’t need dress shoes: from the bleachers to the beach. You can also get it in straight black and maybe even wear it to work, or in a Chicago color combo for a little Jordan flavor. It’s always available at the mall (like always, it’s changed incrementally in the last decade) or at Dick’s, so he can always buy a new pair and retire the old one to lawn mowing duty. And it comes in all widths so dad’s gnarled feet have plenty of room.

So can it follow in the footsteps of other comfy, uncool dad shoes that have developed a following among non-dads, like Wallabees, Mephistos, even Crocs? Keep an eye on 20-something feet in Ridgewood, Queens.