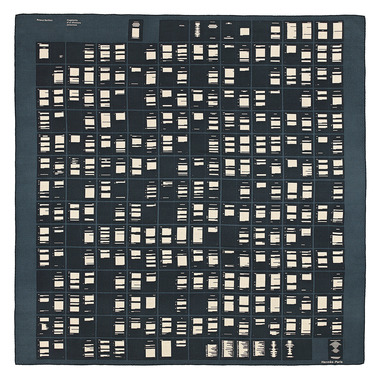 In the New Yorker, Princeton professor Christy Wampole asks whether the French Philosopher would appreciate the $1,000 scarf Hermès has designed in his honor:

Hermès, the French luxury brand, has paid homage to the philosopher and
semiotician Roland Barthes on the centennial of his birth, this
November, by crafting a limited-edition silk scarf printed with a motif
inspired by his book “A Lover’s Discourse: Fragments” (1977). How would
Barthes read this object? He read everything, after all—not just books… And what
would he have had to say about the scarf’s
eight-hundred-and-ninety-five-euro price tag?

…maybe Hermès was on to something when they
chose to design a scarf to commemorate his life. The Barthes scarf is a
particularly readable and mythological object: fragile, expensive, and
thus to be handled with care, as he handled all of his objects of study.
Perhaps silk is the best material with which to honor Barthes. It is a
natural fiber, exuded by a living thing and thus containing something of
this life within it; its history represents the encounter between East
and West; and its invitation to touch puts it in the same category as
human skin. The scarf holds its own significance. As a tool for veiling,
it floats somewhere between the necessary and the ornamental, and it
might remind us of the forgotten link between “text” and “textile.” The
author’s text becomes textile, now meant to adorn a throat, to cloak a
woman’s hair, to waft in the wind—in short, to become unreadable. The
irony of all of this would surely not have been lost on Barthes.

Read the rest here. The real question, I think we can all agree, is whether we are pronouncing Hermès and Barthes correctly.