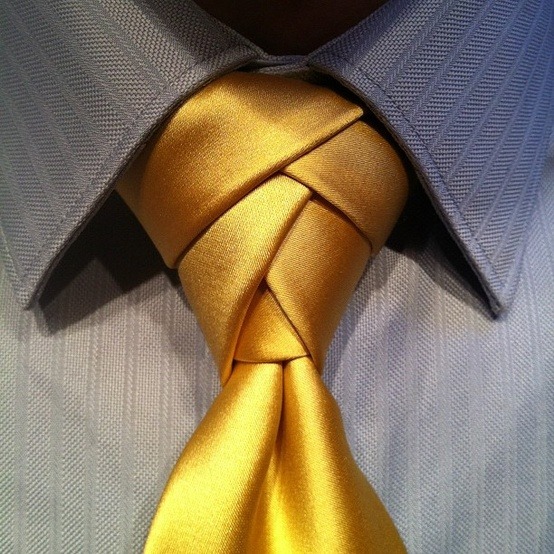 Here is all you need to know about “advanced” tie knots: they are useless and you shouldn’t wear them.

Above is the absurdly dumb “Eldredge Knot,” but it’s far from the only offender. Rarely does a week go by where I don’t end up with an email about Pratt knots or Winchester knots or Dubble Bubble knots or some other goofy stuff.

The Four in Hand

The old around-around-behind-over-through. The classic four in hand knot is simple, easy to tie, holds a dimple well, and is appropriate for any situation. It is slightly asymmetrical, which is desirable. It is more flattering to most men, more relaxed and more distinctive. Really the only time this knot isn’t suitable is with a very skinny, insubstantial tie.

The Double Four in Hand

This is the four in hand knot with an added wrap-around, as seen in this video by our friend GW. Useful if you are shorter and need to use up some extra length from an off-the-rack tie, or if you prefer a slightly fuller knot. I use it once in a while to give more structure to the knot of a knit tie.

If you’re one of those people who insists on symmetry, go ahead and use the half Windsor (or the Pratt, I guess). Just know that none of the Windsors ever wore the Windsor, half or otherwise. They wear the four in hand for the reasons outlined above. And look better because of it. (The full Windsor should be the exclusive province of Donald Trump and former NFL stars and other people whose goal is to look like a jerk.)