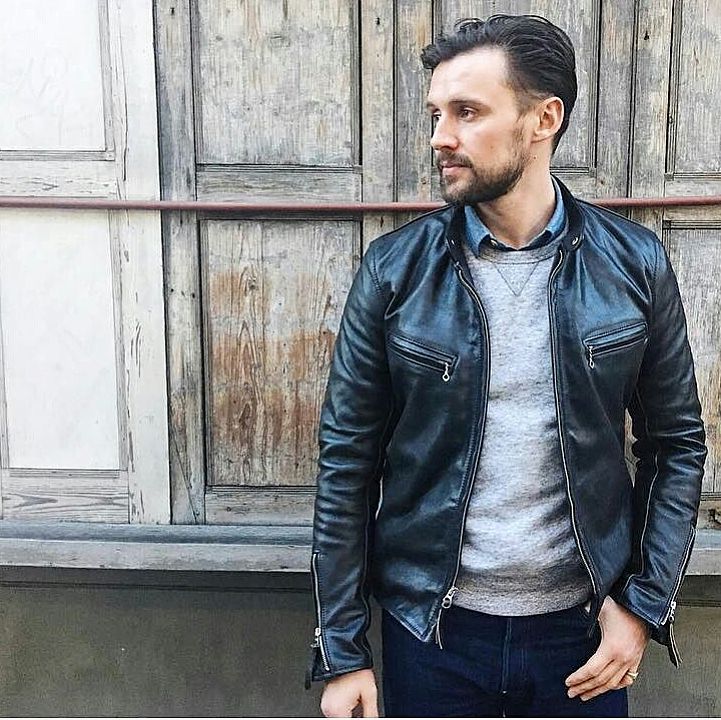 Over the weekend, bespoke shoemaker Nicholas Templeman came into San Francisco as part of his US trunk show tour. Nicholas typically wears sport coats and dress shoes for his trunk shows, but during his off hours, he dresses pretty casually (e.g., sneakers, jeans, and t-shirts). Before we left his hotel to grab dinner, he said to me: “Oh, I have to show you this new leather jacket I bought.” He reached into his closet and pulled out this squid-black cafe racer made from a thick horsehide leather. It was Aero’s Board Racer.

No leather jacket will do everything, but cafe racers such as Aero’s Board Racer come close. The style was originally worn in the early- to mid-20th century as a part of a competitive motorcyclist’s kit. Racecourses at the time were made from wooden planks, which had a tendency to get slick from motor oil. So, for protection, racers wore form-fitting, unlined, leather racing shirts. Those styles eventually metamorphized into Buco’s J-100, arguably the best-known moto style outside of Schott’s Perfecto. The cafe racer is also one of the easiest leather jacket styles to wear — and the Aero Board Racer has become a reference model.

Aero Leather has become popular in the repro community for their tough build, classic styles, and quality materials. The company was started by a young DJ named Ken Calder who, in the 1960s, was doing the light shows at London’s Marquee Club (known as one of the most important venues in rock music history, where bands such as The Rolling Stones, Led Zepplin, and The Who got their start). To supplement his income, Calder bought second-hand jeans from an American contact stationed at a nearby US Air Force base. He’d then repaired those jeans at home before selling them to fashionable Mods. From there, Calder learned how to sew and eventually opened a tiny custom clothing shop in Kensington Market. Using his contact list from his days at The Marquee Club, he built a clientele of rock musicians who needed custom clothes for stage performances. Many of those clothes were in the outlandish styles characteristic of the Swinging Sixties (Clader, for example, produced Elton John’s star-motif platform boots).

At his heart, however, Calder has always been a vintage clothing enthusiast. He grew tired of making wilder clothing styles, so he closed his Kensington store, took a break, and opened The Thrift Shop, a large vintage clothing boutique that operated on a “pile it high, sell it cheap” philosophy. “In 1976, a men’s vintage shop in London was as rare as rocking horse droppings,” Calder once said in an interview. “They’d all folded after the Gold Rush days of the late 1960s, so we virtually had the market to ourselves for at least the first few years.”

The Thrift Shop operated in the same way many low-end vintage dealers do today. They bought bales of vintage clothing, sorted out the best stuff, and then found customers for repaired goods. It didn’t take long for Calder to find out that the largest profit margin was to be had in Grade 3 bales — vintage, American military leathers with ripped linings, burst seam, and broken zippers. He bought, repaired, and sold as many of those as he could. However, the vintage market being what it is, Calder found that he couldn’t get all the sizes he needed for in-demand pieces such as the A-2. So, he created his repro brand Aero in 1984. This is, essentially, the same story of how many Japanese brands got their start. Squeezed by a tight and expensive vintage market for Americana and workwear, they decided to just make the stuff on their own as historically accurate as possible.

Aero’s commitment to historically accurate and tough-as-nails construction has made them popular with workwear and denim enthusiasts, particularly on boards such as DenimBro and The Fedora Lounge, as well as niche Japanese markets. In an interview with Almost Vintage, Calder said:

All our techniques are reverse engineering. We are one of a very small number in our genre using truly traditional, pre-WW2 US construction methods. This means never gluing or skiving the leather on the seams. Gluing and skiving helps with sewing, but they detract from durability. We even hand sew all our buttons for appearance and strength.

In my way of thinking, skiving leather is a way to cheat a buyer. Sure, shaving some of the thickness of the leather makes it easier to sew, and it gives the seam a flatter, neater appearance. This is especialy true at the head of a sleeve or coming off a bi-swing back. But when you skive the leather, it comes at the cost of durability. A 1.2 hide is a fairly substantial leather. I’d imagine anyone buying leather of that weight and thickness expects the leather at the main stress points to be 1.2, not a lot thinner because the seam areas had been skived to 0.6 or 0-7.

Gluing seams is also very popular among Japanese makers. It helps with neater stitching, but sadly it makes the jacket nearly  impossible to unpick or repair when the seams become broken. Similarly, gluing the front edges alongside the zipper makes is easier to do a neat topstitch, but then it also becomes difficult to replace a broken zipper. If the topstitch is too small, that job goes from extremely difficult to impossible. An Aero jacket is put together in exactly the same way as the ones I repaired back in the late ‘70s, very few of these original jackets would have survived had they been glued and skived like so many of the current offering by others in this field.

(Perhaps notably, most leather goods, including high-end leather shoes, are skived at the seam to give them a neater, flatter appearance. Unless you’re unusually hard on your clothes, you should be able to get decades out of a leather jacket regardless if the seams have been skived, although Calder’s technique is nice if you appreciate the appearance of a tougher leather jacket). 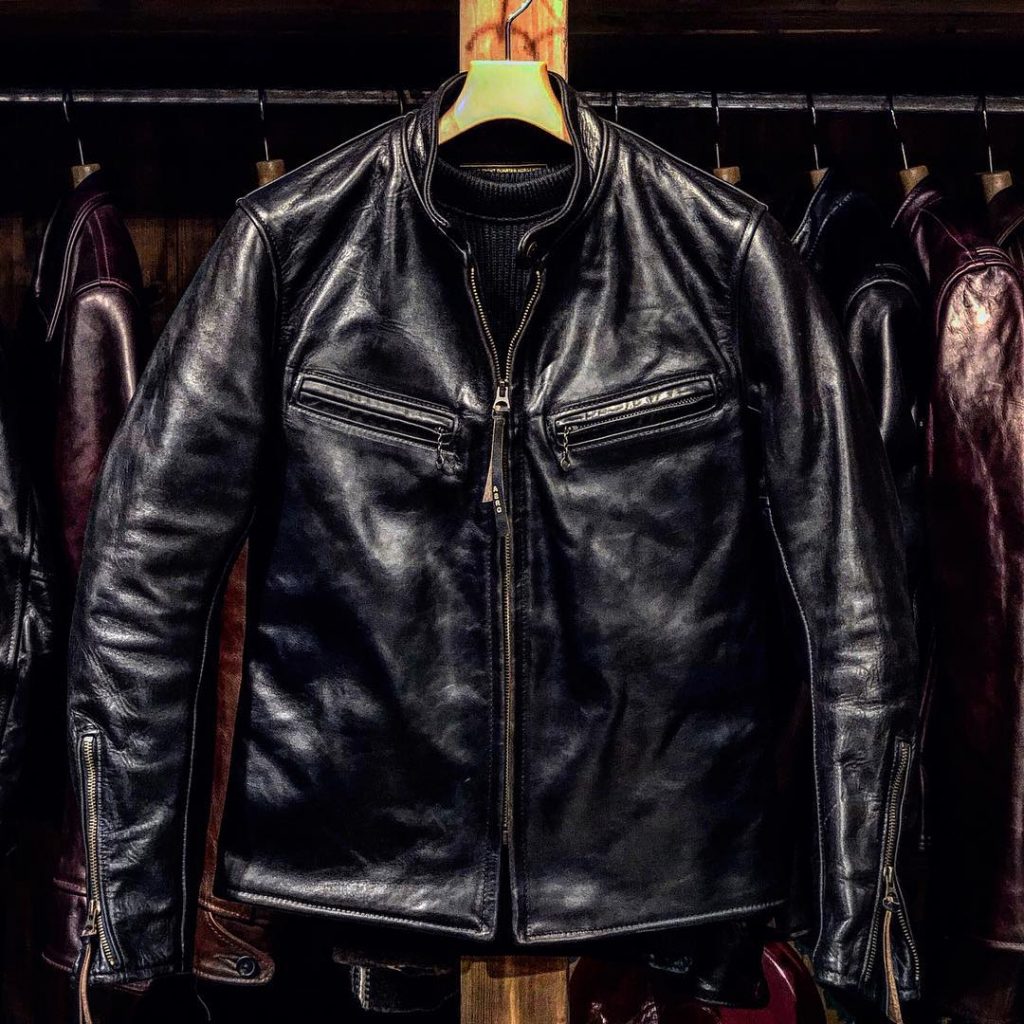 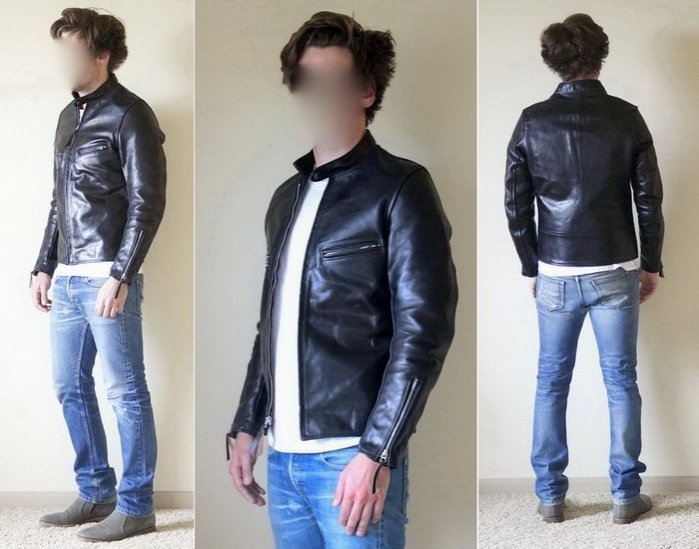 The majority of Aero’s styles are too repro for most PTO readers. They’re modeled after classic early- to mid-century styles, often historically correct in both pattern and make, which means they look best with other kinds of period correct clothing. Their Board Racer, however, is unique in that it neatly fits into most lifestyles. It’s a rugged jacket without the heavy-handedness of a Schott Perfecto. It’s contemporary but not fashion forward. In the right outfit, it can look very modern — with a t-shirt, slim jeans, and side-zip boots. But it’s also a classic style that you can wear for years to come.

In the United States, Aero is distributed through the Seattle-based shop  Thurston Brothers. They do both ready-to-wear and custom leather jackets. The process is pretty simple. They have a collection of jackets that they sell directly to customers or use for fitting purposes. That means that, when you order, you’re sent a ready-made jacket as a try-on piece. If you like the jacket as-is, you keep it. Otherwise, Thurston offers a range of customization options, including changing out the leather or adjusting the fit (about 80% of their orders are custom).

Most customers order the Board Racer in Vincenza horsehide, which is a thick and robust leather with an unusually rich color. Horween’s pull-up Chromexcel leather trails at a distant second place. Thurston recommends sticking with a mid-weight leather since the Board Racer is designed to sit so close to the body, although they’re happy to send out sample swatches along with every fitting jacket so you can handle their leathers in-person. Nicholas Templeman had his made from a black front-quarters horsehide. “The first day, I was walking around like a stiff robot, but it’s since broken in pretty nicely,” he said.

Here’s the catch: Since heavy leather jackets are expensive to ship and Thurston is a small business, they don’t allow for refunds. When you order a Board Racer, you’ll get a fitting jacket and some sample swatches. That should allow you to customize your jacket, both in terms of fit and styling, to suit whatever you need. However, if you find the Board Racer style isn’t for you, they’ll only allow you to use your credit towards another purchase, not exit out of the ordering system entirely. On the upside, they have other handsome styles: a simpler cafe racer (a closer repro of the original Buco J-100), Type III trucker jacket, and a range of bombers. I think the Board Racer is the best of the bunch. The jacket wears like a hard shell, which means the stiff leather and V-shaped silhouette gives you the appearance of a more athletic figure. If you’re looking for a rugged leather jacket that you can easily wear with jeans, Aero’s Board Racer is worth your consideration.