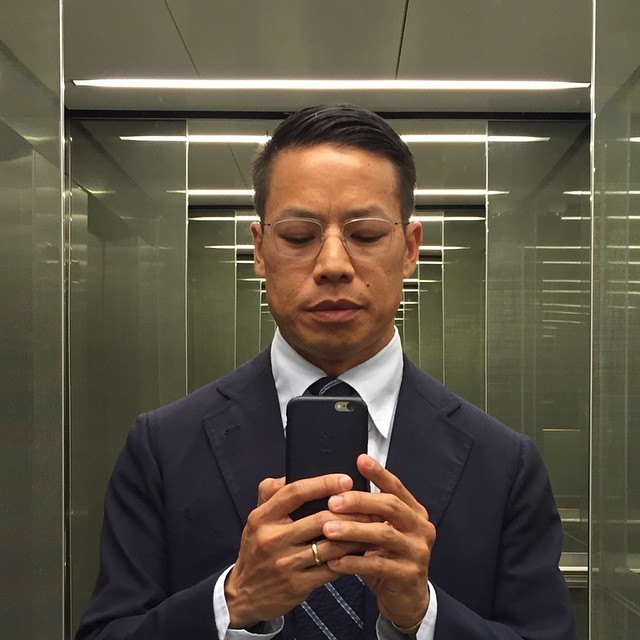 Elegance often comes from simplicity.  Our friend MistahWong is one of the best-dressed guys we know, and with his suits he wears plain white and blue shirts.  There’s absolutely nothing wrong with that.

But when and how should you wear solid blue and white shirts?  What are the advantages and disadvantages of each?

White shirts are the all-time classic.  They came to be regarded as the formal shirting in a time when people had access to far fewer clothes.  The fact that you could wear a “white collar” meant that you were a successful professional or aristocrat who could afford to own and maintain easily-soiled shirts.  That meaning, of course, has faded, but the white shirt remains the standard for formal dress.  If you’re going to a christening or a funeral or a board meeting, you will likely (and reasonably) wear a white shirt.

The white shirt also goes with everything.  It is a neutral ground for almost any tie or coat.  Today, in fact, I’m wearing a white oxford shirt with robin’s-egg blue trousers that would have looked a bit off (not to mention a bit much) with almost any other color shirt.

Of course, the white shirt has its disadvantages as well.  Probably the most significant is that it isn’t complimentary to the coloration of almost anyone.  The complexions of light-skinned white men, in particular, tend to be washed out by white shirts.  A lot of bright white can make a man’s skin look vaguely sickly rather than vibrant.  This is less of an issue if you have dark skin, but it’s dangerous without a marked contrast – you’d probably look better in cream or ecru anyway.

The white shirt is also ubiquitous.  It is the shirt of the poorly-dressed man.  A poorly-fitted or poor-quality white shirt is the quickest route to looking like a bank teller or a teenager selling magazine subscriptions door-to-door to “pay for college.”

The blue shirt is less formal than the white shirt, but it’s still acceptable in almost any formal situation.  You wouldn’t wear a blue shirt with black tie, and you might be less likely to wear it to an art opening or funeral, but it’s certainly acceptable in almost any office.  The reality is that most, outside of England anyway, would accept in in pretty much any situation.

It’s also much more gentle on the complexion.  No less suitable for the man of color, for most white men it will almost invariably look notably better.  If you happen to have blue eyes, there’s no excuse not to wear it, as it will make you sparkle.

The blue shirt is also just as versatile as the white shirt.  It’s tough to find a combination of tie and suit that would look wrong with a plain blue shirt.

So, what should you have in your closet?

Certainly use white shirts for important occasions.  Have one or two great white shirts.  My own white shirts include a Barba I bought for my wedding, a Charvet I thrifted and a Corneliani I bought for everyday wear.  All three have rich weaves and soft hands that make it apparent I’m not wearing a $19 shirt from Marshall’s.  They are formal shirts that reflect the significance of the occasions when I will wear them.

I also have several white oxford-cloth button down shirts for casual wear.  Oxford cloth has a texture which reduces the sheen which can make a white shirt look cheap and can make your face look extra-sickly.  It is particularly important to avoid non-iron finishes in white shirts, which tend to make them look slick, cheap and all-around lousy.  For a casual shirt, there’s nothing wrong with a little rumple.

What do I do?  When I’m grabbing a shirt from my closet to go with a sport coat or suit, it’s usually blue.  A few blue oxfords from Lands’ End and Benjamin Bixby are probably the shirts I wear most.  A few harder-finish nearly solid blues (shirts with a slight pattern that read as solid) are what I grab for suits or more formal sport coat situations.

Generally, your go-to shirts should be blue, too.  Your more formal shirts should be white.  Particularly with white shirts, keep an eye on quality – it’s easy to look like you went for the white shirt because without it, you couldn’t manage dressing yourself.