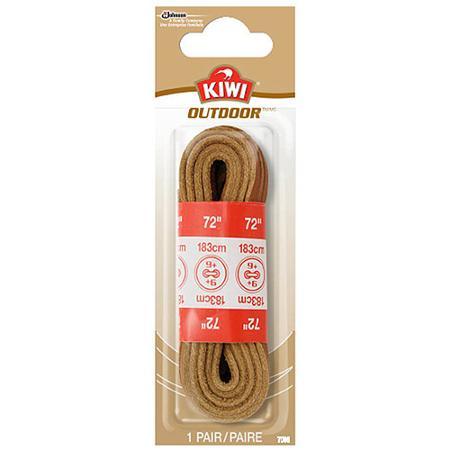 The shoes I wear most all through the cooler months are a pair of Alden “Indy” boots. I bought them on eBay years ago, and like a lot of people, found that I had broken the relatively dressy laces that came with them within a year or so. I grabbed a pair of rawhide laces that had come with some Red Wings to replace them, and used those quite happily for three or four years. They stretched a bit, but could handle the strain of being wrapped around the quick-lacers and so on.

This weekend, I was a few days into a trip when my laces snapped. I only had one pair of shoes with me, so I re-laced with what I had and went into a Target to buy some new laces (there weren’t any shoe places open). I was in a hurry and couldn’t decide on a color, so I bought two pairs of boot laces from Kiwi. That way, I figured, I’d have a backup on hand.

That’s not how it worked out. Amazingy, the first pair broke as I was lacing my boots. Not even as I was tying my boots. Just putting them through the holes! I’ve never been so glad to have bought a backup.

The backup pair worked admirably. Until it, too, snapped. Two days later.

Give me a break.