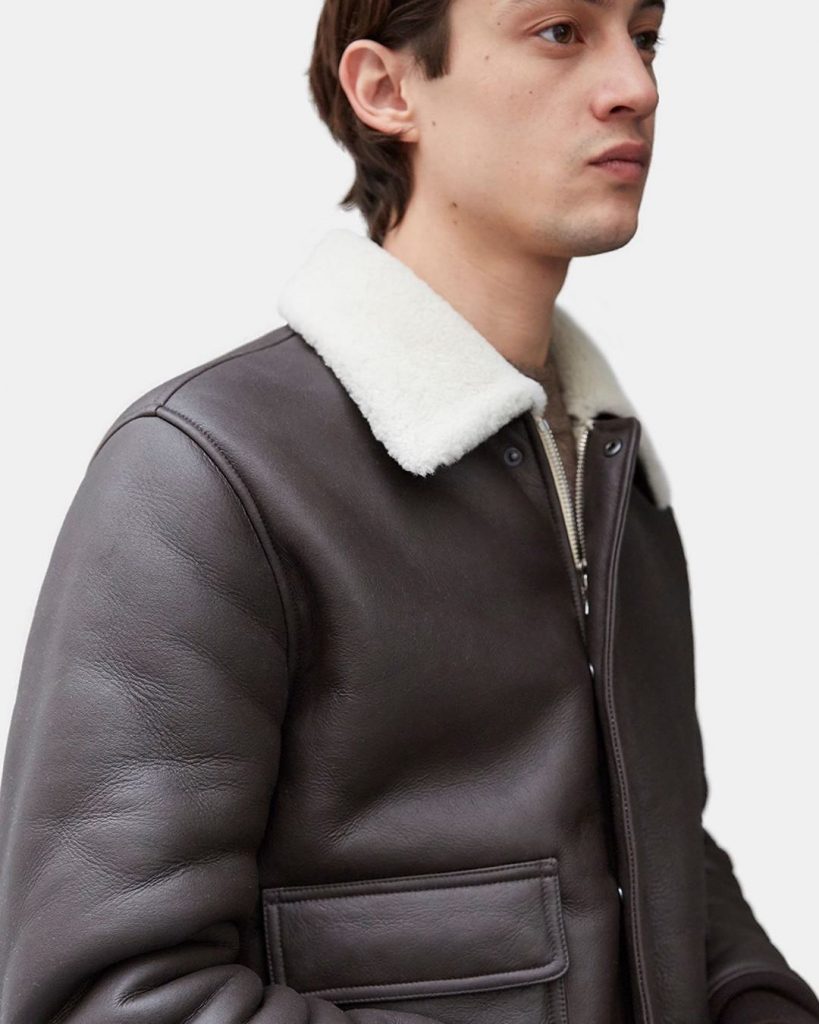 It’s not even Black Friday yet, and some retailers have already started some big promotions. Over at Matches Fashion, you can find select items discounted by as much as 50% off. For those unfamiliar, Matches is like a boutique version of Mr. Porter. The company is based in London, but their free shipping and free return services make it easy to send something back if things don’t work out. For customers in the United States, they also take care of all import duties. I’ve ordered a few things from them over the years and find the service to be as seamless as any high-end retailer you’d expect from a domestic company.

Much of what you’ll find here leans a little fashion-forward, but there’s also a mix of classic-inspired items and heritage brands that should fit easily into any wardrobe. Some notables: 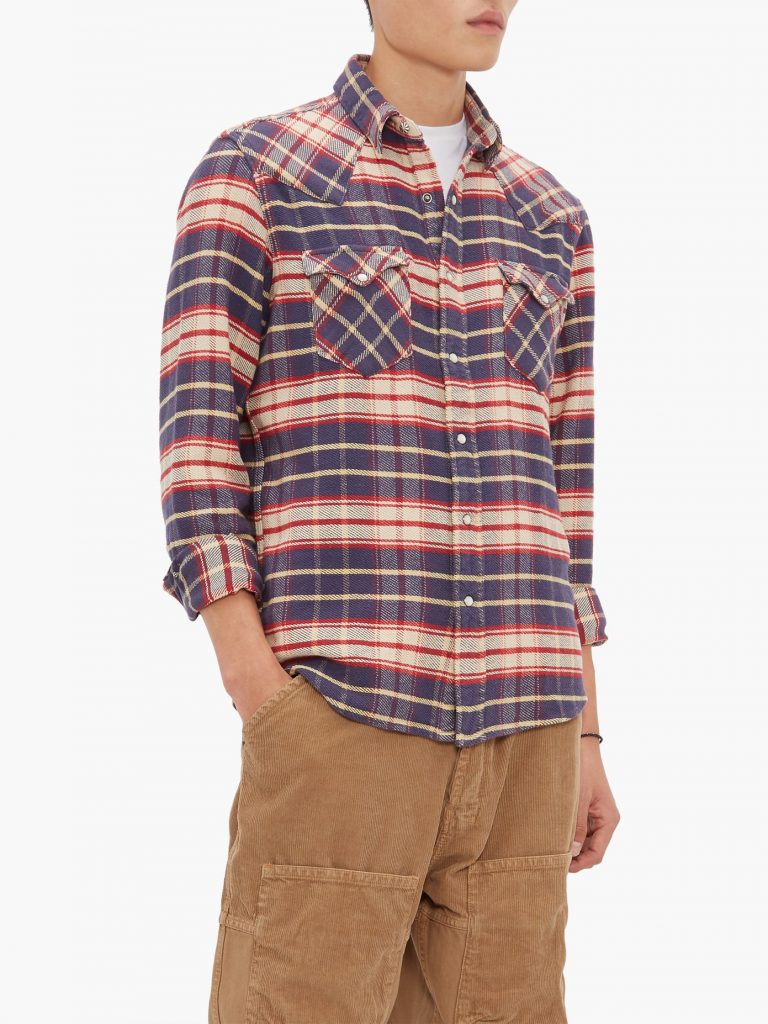 Next to blue jeans and white tees, flannel shirts are about as classic as you can get for casualwear. This one from RRL is a little more Western-inspired. There are snap pearl buttons and a concho detail at the top of the shirt. I think it would pair well with similar Western-inspired workwear: trucker jackets, ranch jackets, slim blue jeans, and either roper boots or side zips. If you generally like things such as LL Bean and Woolrich, however, check out RRL’s Towns Camp shirt or sun-faded Farrell. 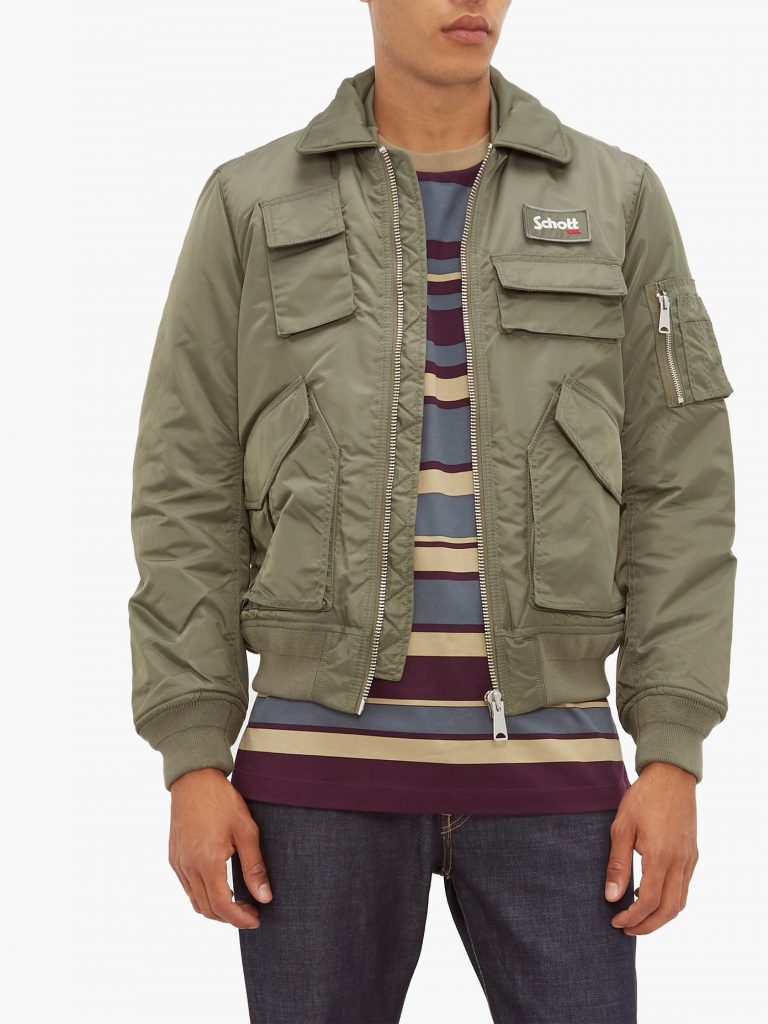 I know what you’re thinking: the chest logo ruins it. But close-up photos of this Schott bomber suggest that’s just a removable patch. If you rip it off, it’ll reveal the fuzzy loop-side of the Velcro tape underneath, but that detail is traditional on nylon bombers. I mostly like this for its silhouette. It’s slightly rounded and cropped, which will look great with slim jeans and either a shorter t-shirt or tucked-in flannel. The padded filling, ample pocket space, and traditional emergency-orange lining are also nice details. At $148, this is an excellent deal for outerwear. 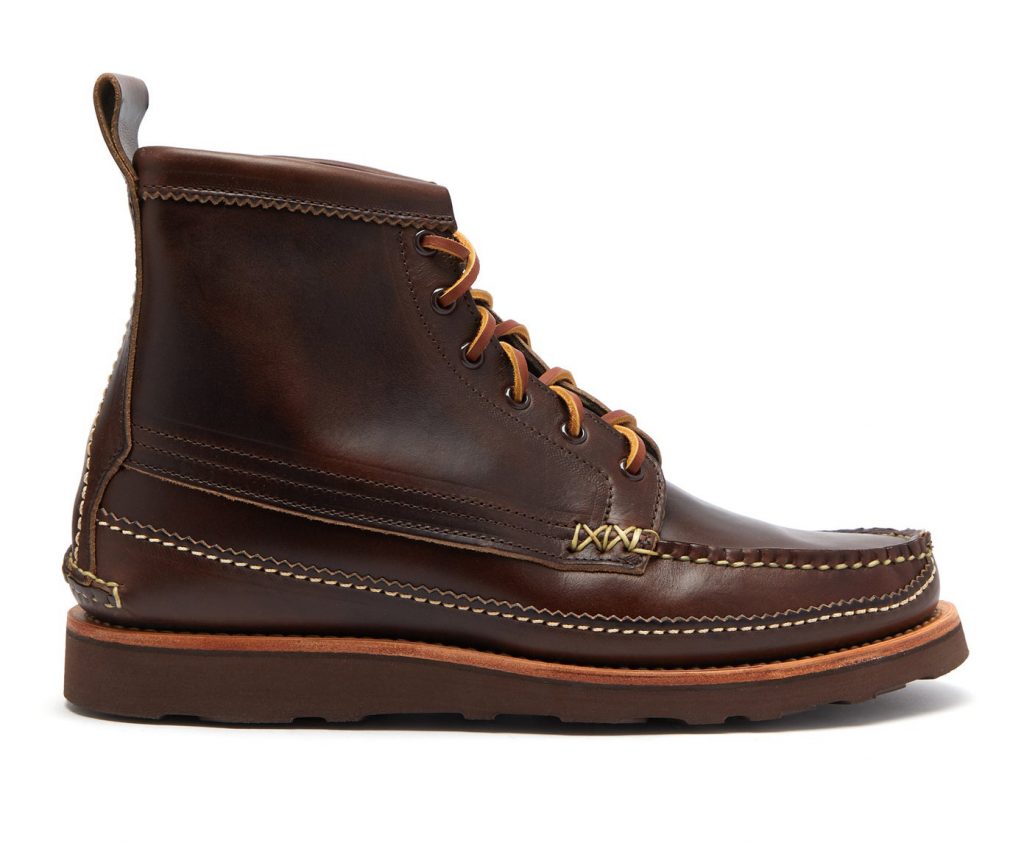 I love everything Yuki Matsuda designs. He’s a Japanese designer based in California, making a wide range of offbeat takes on workwear and Americana under his umbrella group Meg Company. He’s the guy behind Monitaly, Yuketen, Chamula, and Epperson Mountaineering. His products are exceptionally made — as well-made as any other traditional brand in this category — but the designs are often so much more fun to wear and look at.

These Yuketen boots, for example, are modeled after something Maine Guides used to wear while accompanying people around the backwoods of Maine. They feature a moc-stitched toe, wraparound moccasin construction, and full-grain leather (likely a pull-up leather from Horween). Today, you can find a more traditional version of this style through companies such as Rancourt and Quoddy, but the Yuketen version may be better if you like brands such as Engineered Garments and Kapital. Matches also has suede angler boots, work boots, and a hefty chukka. Note, I find Yuketen shoes to run a bit wide, so consider sizing down a half-size (if you normally wear a 9D, you’re likely an 8.5 in Yuketen). 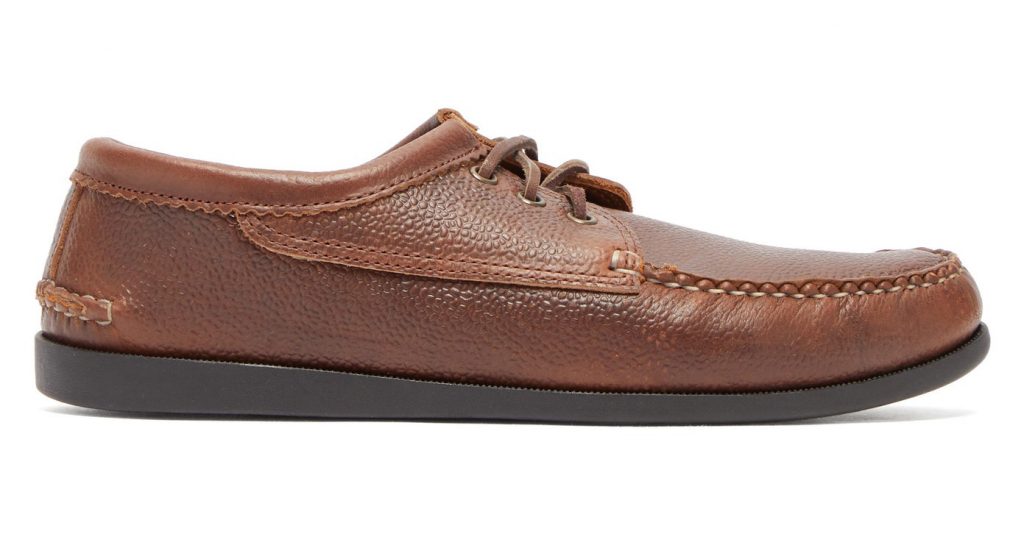 Speaking of Quoddy, their moccasins are on sale starting as low as $100. These bluchers would go well with a simple spring or fall outfit: slim jeans with a plaid flannel shirt, maybe with camp socks and a chore coat. 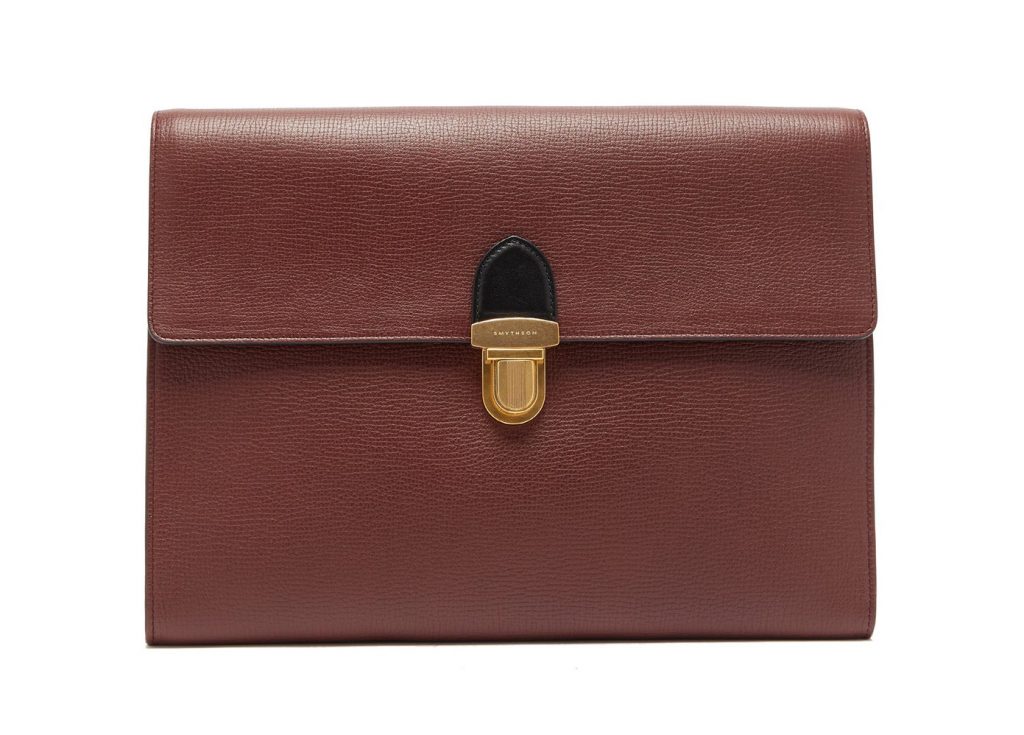 Folios are surprisingly uncommon here in the US, but they’re tremendously useful. For one, they’re easier to manage than a traditional briefcase. If you’re running through the city, climbing in and out of cabs, it’s easier to reach into your belongings when you don’t have to fumble through a bunch of clasps or buckles. Plus, unlike a backpack, a folio doesn’t have any straps that could ruin a tailored jacket’s shoulder line. My daily carry nowadays is usually not more than my laptop and its accompanying charger – and all that neatly fits into a portfolio, which I think of as a modern briefcase.

Smythson’s looks exceptionally nice for just under $400. It’s made from a printed grained leather, features a gold-colored push clasp, and has an easy-to-access back pocket (useful for receipts, loose papers, and train tickets, I find). The size is also large enough for a MacBook. Other notable Smythson products: holdall bags in kelim fabric or leather, nicely designed Dopp kits, and affordable card cases. 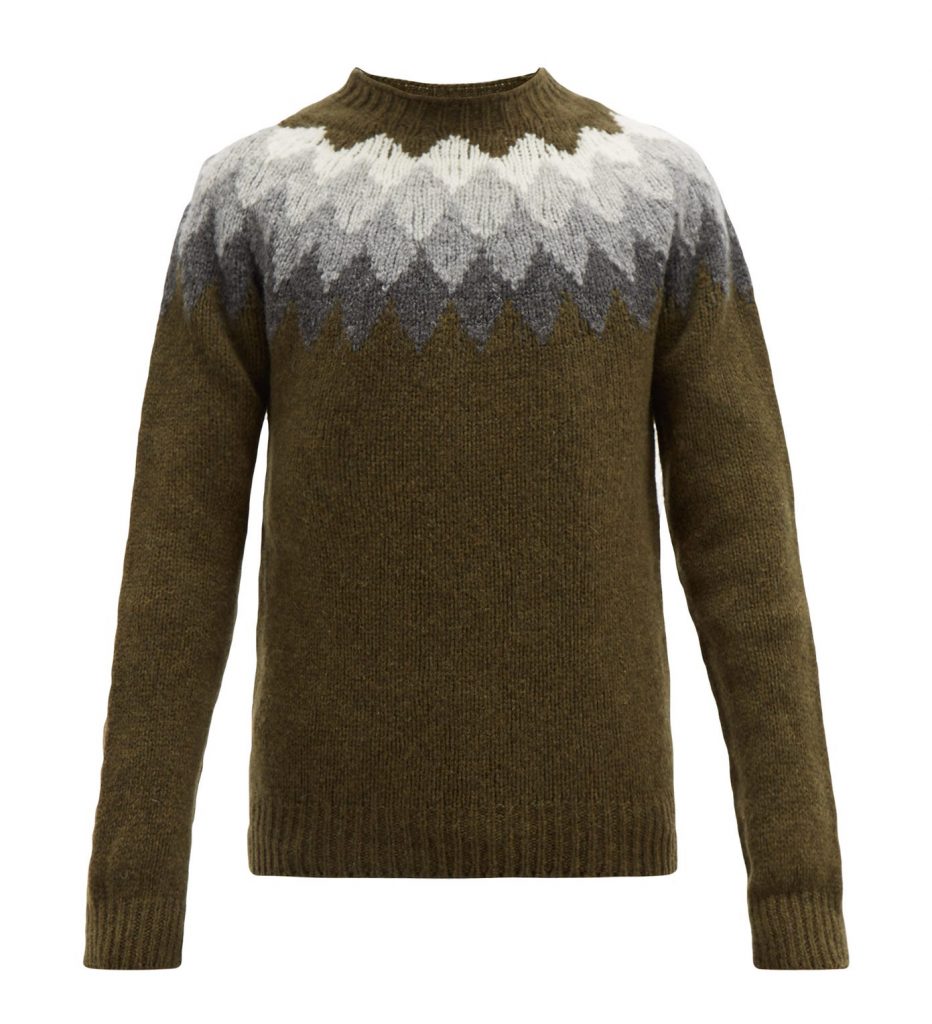 This Officine Générale sweater is the company’s take on a lopapeysa, a traditional Icelandic design that’s become a symbol of national cultural identity. Historically, Icelandic sweaters were made from airy unspun wool yarns, which in turn were made from local and native sheep. The sweaters came in austere colors, such as black, grey, and brown, as well as the usual white. But they’re mostly defined by that necklace-like decoration surrounding the neck opening. This Officine Generale sweater is likely less rustic than the originals — which were often worn by Icelandic workers and fishermen — but it features that handsome yoke design. You can use it to add visual interest to an outfit, or wear it on its own with tailored trousers. For the more adventurous, check out these self-belted pleated pants. 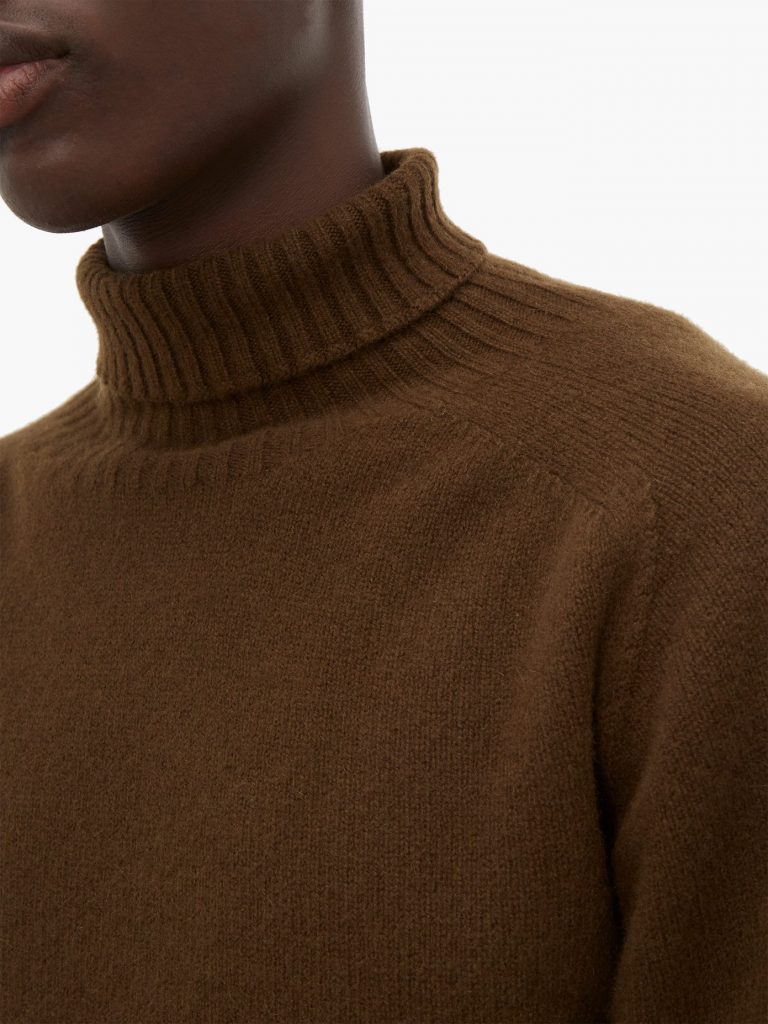 Margaret Howell is like a rustic British version of Cucinelli. The clothes are exceptionally well-made, but the silhouettes are a little looser fitting and the colors are drab. Instead of the Italian fantasy of living in some cashmere village and eating salami, these are the clothes you’d imagine you’d wear while, I don’t know, churning butter. I’m a big fan of the company. Mainline is where all the good stuff is happening, although the slightly lower-end MHL offshoot is a little more affordable. Check out this olive turtleneck (also available in black), speckled Donegal crewneck, cotton canvas trousers, and best of all, the belted drill coat. Butter knowledge is not required. 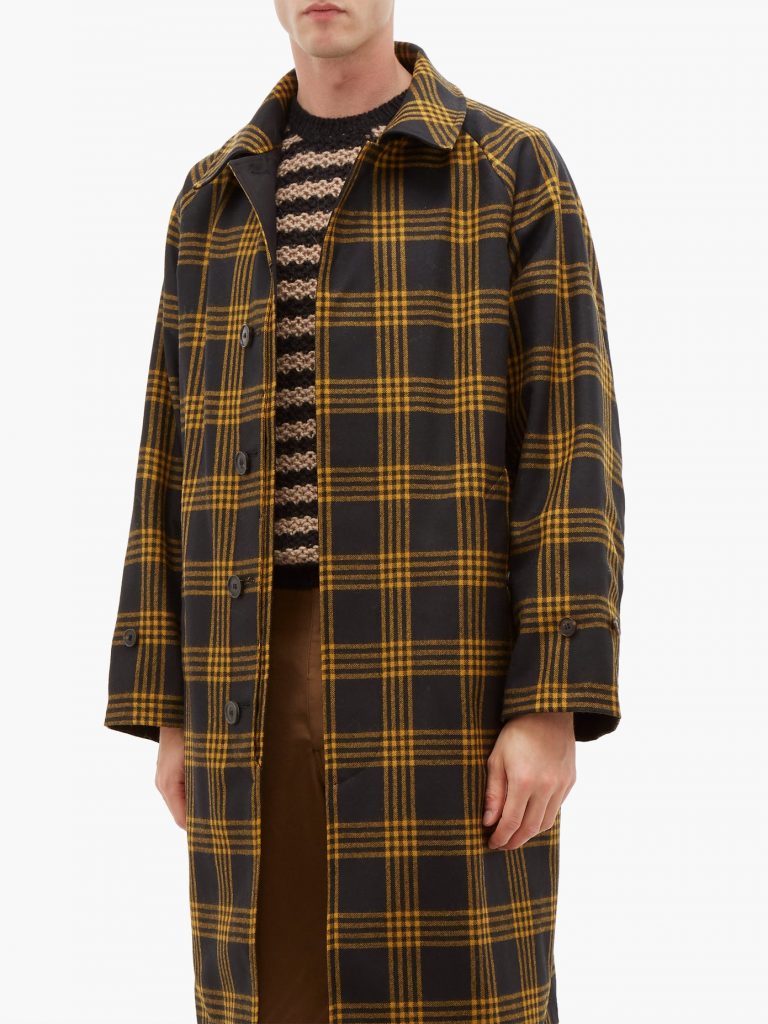 The plaid side of this reversible Mackintosh raincoat looks like something your stylish aunt would wear. And honestly, I love it. The reverse side is solid black for when you need something more conservative. But the yellow-and-black check side is where all the action is happening. Since they’re made with a thin layer of rubber sandwiched between two layers of other materials, Mackintosh’s bonded raincoats breathe as well as a plastic bag. That makes them better for the cooler days of fall and winter, rather than warm spring showers. But the fabric drapes beautifully and it rustles like a sail when you move. 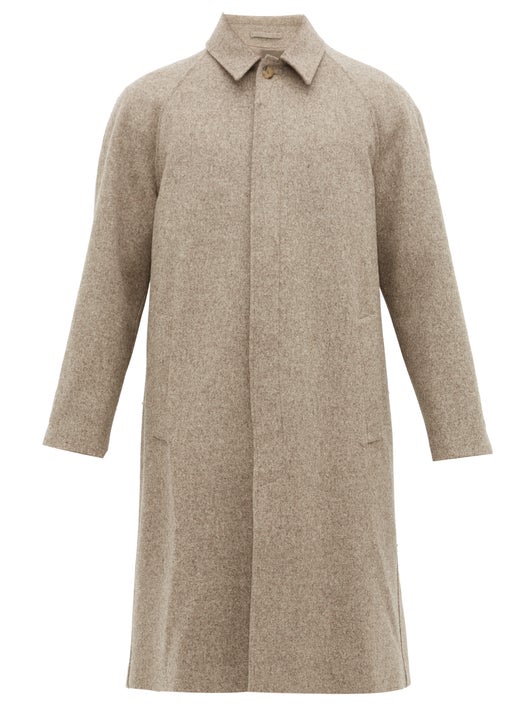 A good topcoat is one of the easiest things you can wear. It goes with jeans or tailored trousers, contemporary wardrobes or more classic ones. It helps dress up casualwear and gives you some of the benefits of tailoring. At the same time, topcoats look suitable in almost any casual environment.

De Bonne Facture’s version comes with raglan sleeves, which means the sleeves are attached using a diagonal seam that runs from the armpit to the neck. This gives the appearance of a more rounded silhouette when worn — a little more casual and relaxed, rather than the squared-off T-shape of set-in sleeves, which have defined shoulder seams that end at your shoulder joints. De Bonne’s topcoat is also made from a soft blend of two varieties of wool the company sourced from the Franco-Spanish border. I love the slightly mottled color and natural hue. If you’re looking to splurge, this shearling bomber is also available at half-off for $1,345. It’s pictured at the top of this post.

Filed Under: It's On Sale, Matches Fashion