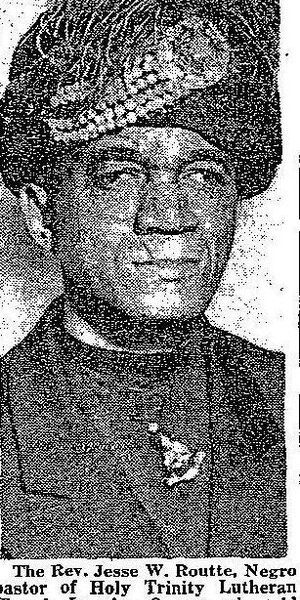 NPR has an interesting story about how some African-Americans used turbans to deal with discrimination in the Jim Crow era. An excerpt:

Routté’s experiment began after he traveled to Mobile, Ala., in 1943 for a family engagement. He wasn’t happy with how he was treated.

Before he boarded the train to Alabama, he put on his spangled turban and velvet robes. When the train reached North Carolina during lunchtime, Routté walked over to the diner car where the only vacant seat was occupied by two white couples.

One of the men said, “Well, what have we got here?” to which Routté replied in his best Swedish accent (he had been the only black student at a Swedish Lutheran college in Illinois), “We have here an apostle of goodwill and love” — leaving them gaping.

And that confusion seemed to work for Routté on the rest of his trip. He dropped in on police officials, the chamber of commerce, merchants — and was treated like royalty.

At a fancy restaurant he asked the staff what would happen if a “Negro gentleman comes in here and sits down to eat.” The reply: “No negro would dare to come in here to eat.”

“I just stroked my chin and ordered my dessert,” he said.

“He didn’t change his color. He just changed his costume, and they treated him like a human,” says Luther Routté, who has been a Lutheran pastor for 25 years. It “shows you the kind of myopia that accompanies the whole premise of apartheid or segregation.”

Through the “turban trick,” Routté basically transformed himself from a threat to a guest — black to invisible.

You can read the whole story here.