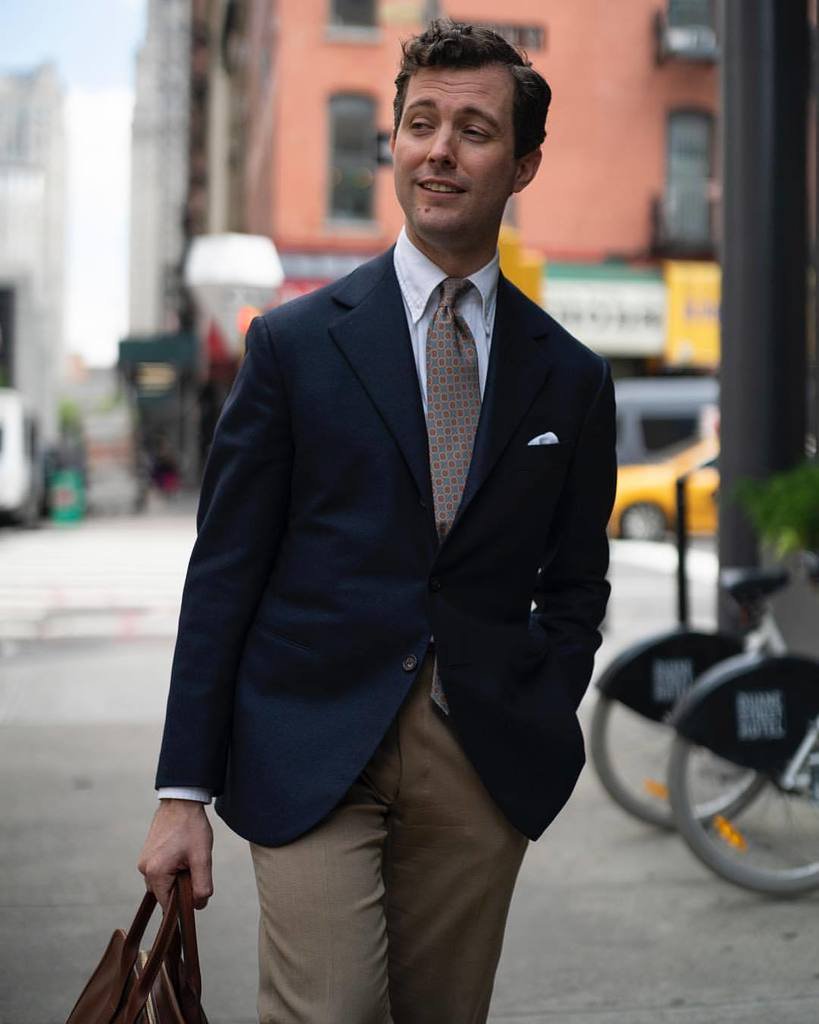 Consider the neti pot. If you’ve never used one, a neti pot is a small ceramic pot, with a narrow spout, used to channel a saltwater solution into your sinuses to irrigate them. This process gives many people relief from sinus symptoms, like allergies. It’s basically up “your nose with a rubber hose” but more grounded in yogic cleansing practices. You mix a saltwater solution, add it to the neti pot, and pour it in one nostril; it comes out the other. By far the scariest part of trying a neti pot is in the moments after you’ve begun pouring the solution into your head, and before it starts exiting. For a few seconds, you wonder: “Where is this stuff going? What have I done?”Sometimes my closet feels like that. I keep pouring fresh clothing in, and nothing comes out. And it gets scary.

So I recently tried to further irrigate my wardrobe. It wasn’t an exercise in minimalism; I still have a lot of stuff. But, especially with tailoring, I tried to figure out how specific pieces fit into real occasions in my life. I have two solid, quiet suits for when I need them (client meetings, interviews, funerals), a couple more casual suits each for summer and winter, and a whole lot of sportcoats, mostly loud. I was surprised to find, while irrigating, I didn’t really have a navy blue blazer I was happy with. I have several (not as many as Jesse), and I like them, but none that feels totally right.

I wear these not-quite-right blue blazers a lot, anyway, because, somehow, a blue blazer remains a bedrock item in men’s wardrobes. You know the reasons:

Yet there is no one single correct navy blazer. 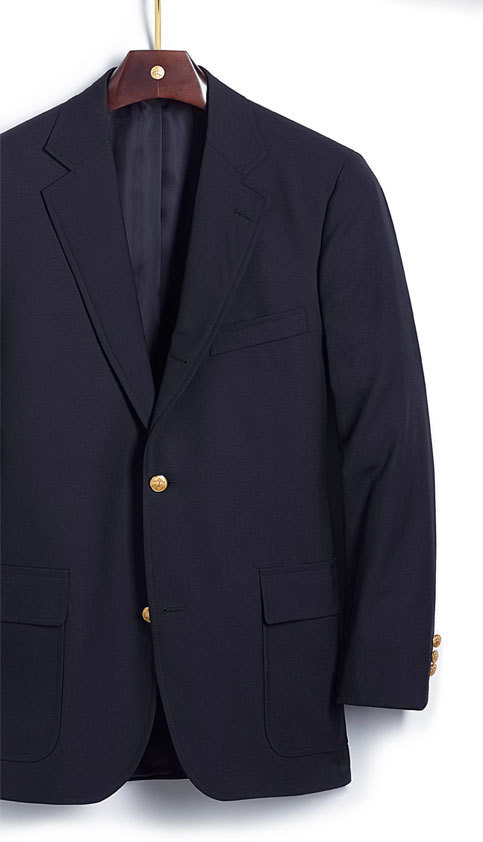 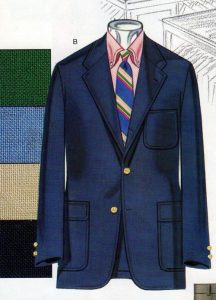 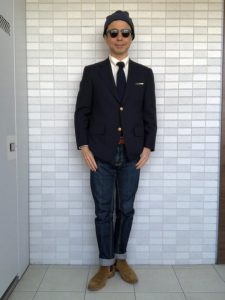 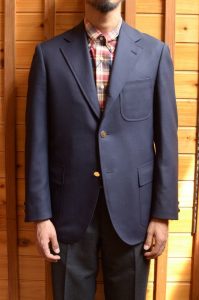 For a while, guys seemed a little embarrassed by gold buttons, little trumpets announcing, “Hey I’m dressed up.” But that moment seems to have passed, maybe because by wearing a tailored jacket at all these days you’re announcing you’ve made the choice to dress up a little.

Brooks Brothers still has a version of this jacket, called the “sack” model to differentiate it from their standard jackets, which are defined by fit and sound like Pepperidge Farm cookies. That standard 1818 range online it looks … not great. It uses a stretch fabric and in photos is shown quite tight and short on the model. Their Golden Fleece line model, in wool twill, looks better but not particularly special. J. Press has navy blazers in their standard line and in their Blue line, which is a little trimmer and shorter. Smaller trad shops like the Andover Shop or O’Connell’s will also have unimpeachably acceptable jackets.

If you don’t like the potential ivy associations of the gold-buttoned blue-blood blazer, you still have a lot of options. My next choice would likely be Italian style, with potentially even less structure but maybe a little more shape, double vents, patch or flap pockets, and horn buttons in tan or brown. It’s less specific and potentially young-fogey than the preppier versions.

The most-worn navy blazer in my stable is a Ralph Lauren Polo made-in-Italy version from a decade or so ago in this style. I can’t vouch for the current models 100%, but they look pretty good. The Suitsupply Havana in navy is a reasonable off-the-rack option in this style, as is Spier and Mackay’s Neapolitan style in navy hopsack, when it’s in stock. Italian-made off-the-rack versions range from downright cheap (Boglioli via Yoox) to pretty special (Liverano at the Armoury). 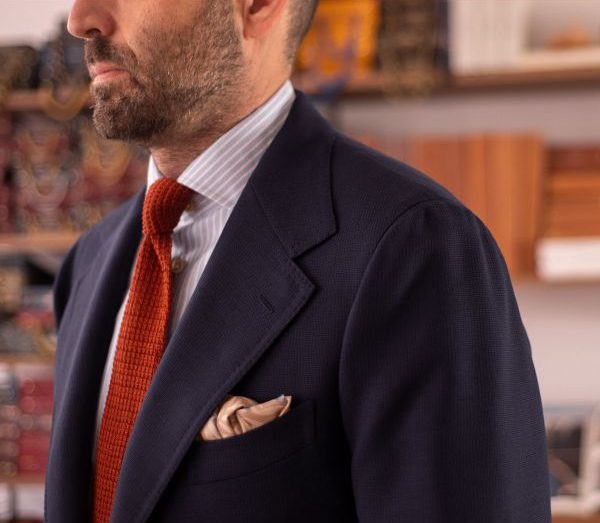 A fresco navy blazer on Greg at No Man Walks Alone.

No Man Walks Alone has a new made-in-Italy tailoring range with a terrific looking navy blazer (seen at the top of this post). The Armoury’s own models also walk this stylistic line — open weave fabrics, fuller chests, and broader lapels. You can also rely on Sid Mashburn to have something in this vein. Their current model has a ticket pocket, and their site has a nice diagram on how to dress navy jackets up or down depending on the weather.

(The Suitsupply Lazio jacket, offered as a separate — i.e., part of a suit but ordered separately from the trousers — illustrates a potential pitfall with navy jackets. In a finer fabric, with tonal buttons, and conservative styling, a navy jacket either is or will look like part of a suit. Will most people notice? Not very likely. But, practically, such a jacket will make less sense to wear casually — it’s hard to dress down. Side note: Club Monaco advertises its Grant model jacket as “the modern suit blazer.” FOH.)

Is This a Blazer? Navy Blazers

You can also venture less traditional with casual jackets that stretch the definition of a blazer, and eschew the internal structure that gives form and shape to traditional tailoring. Something rougher and more work-jacket like from Engineered Garments or Universal Works, both of whom often have simple, unstructured, lapelled wool jackets in the fall. Or Margaret Howell, whose jackets are often somewhere in between. Many of these labels also carry cotton versions, even closer to coverall/chore jackets, from traditional brands like Vetra. 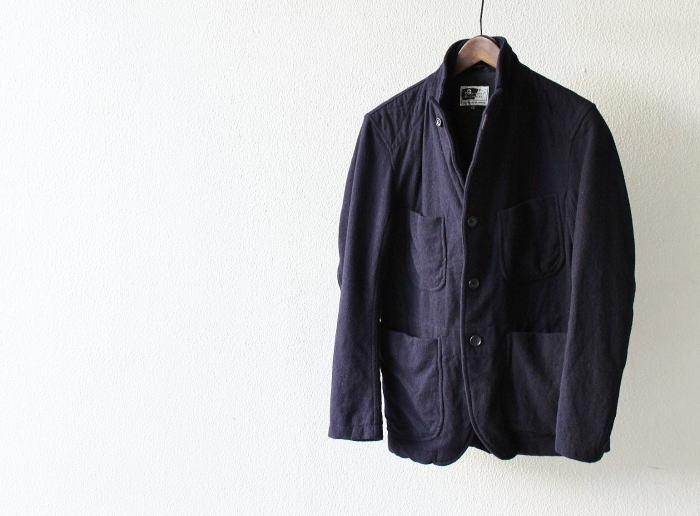 A jacket like this Engineered Garments Bedford can fit the “navy blazer” slot in the wardrobe of a guy who’s not going to wear a traditional tailored blazer. 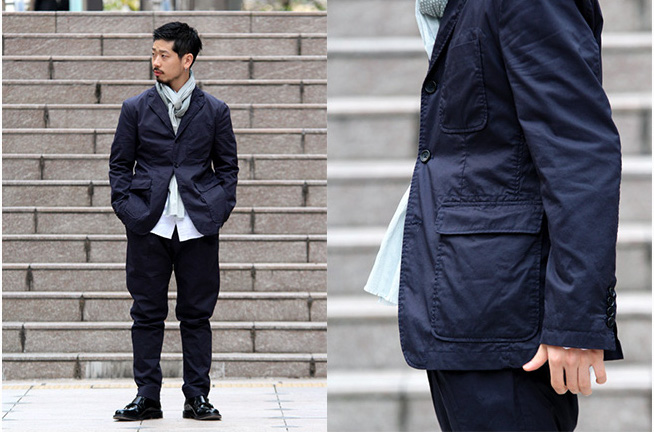 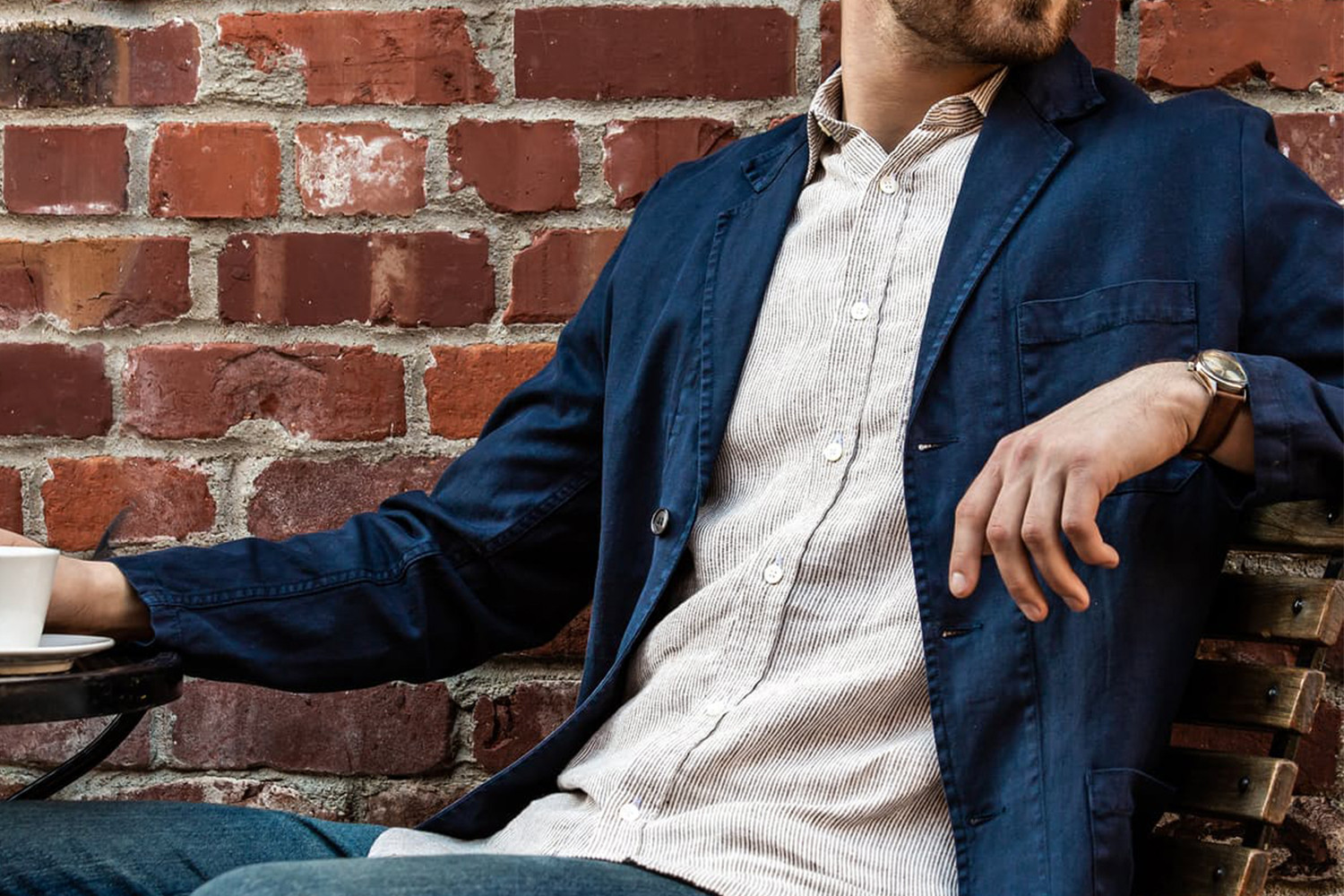 A cotton Vetra jacket. A blazer?