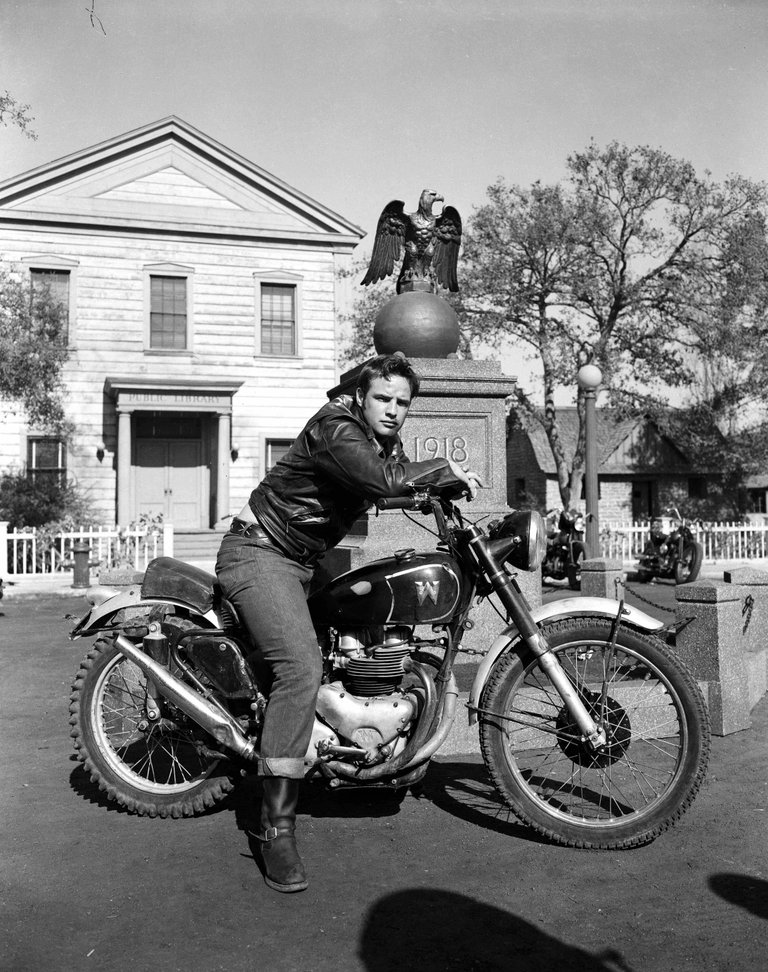 Before the 1940s, leather motorcycle jackets were seen as culturally neutral, utilitarian garments. At the time, American motorcycle clubs were considered like any other social club — they were loosely organized associations through which young people could bond over shared interests. Taking part was considered a normal, healthy activity.

That all changed in the summer of 1947, when about 4,000 motorcycle enthusiasts roared into the small California farming town of Hollister. They came for the annual Gypsy Tour, a three-day carnival of races and field events held over a Fourth of July weekend. Hollister was completely unprepared for the attendees that summer, since nowhere near that number showed up to previous years’ carnivals, and consequently, the small rural community was thrown into chaos.

Over the course of three days and nights, bikers representing groups such as The 13 Rebels, The Pissed Off Bastards, and The Galloping Goose got drunk, brawled in the streets, smashed up bars and storefront windows, and participated in illegal drag races. They slept in haystacks, on sidewalks, and on people’s lawns. Hollister’s seven-man police force tried to keep things under control, but they mostly watched in horror as crazed, drunken crowds took over neighborhoods. By the end of the weekend, after state troopers were called in, about fifty bikers were arrested and sixty people were injured (one person had a skull fracture). The streets were awash in urine, beer bottles, and debris.

Shortly after, Life Magazine published a story about the event titled “Cyclist’s Holiday: He and Friends Terrorize Town.” One of the main photos was of a young biker, later believed to be Eddie Davenport, slouched astride his Harley Davidson, shirt open, and surrounded by broken beer bottles. He was wearing what looks to be a naval deck jacket, possibly a clue that he was one of the many ex-servicemen who joined motorcycle clubs after returning home from the Second World War. There’s some debate about whether media coverage afterward exaggerated the amount of violence and damage, but nevertheless, the event forever clouded the lens through which the non-riding public would see black leather jackets. 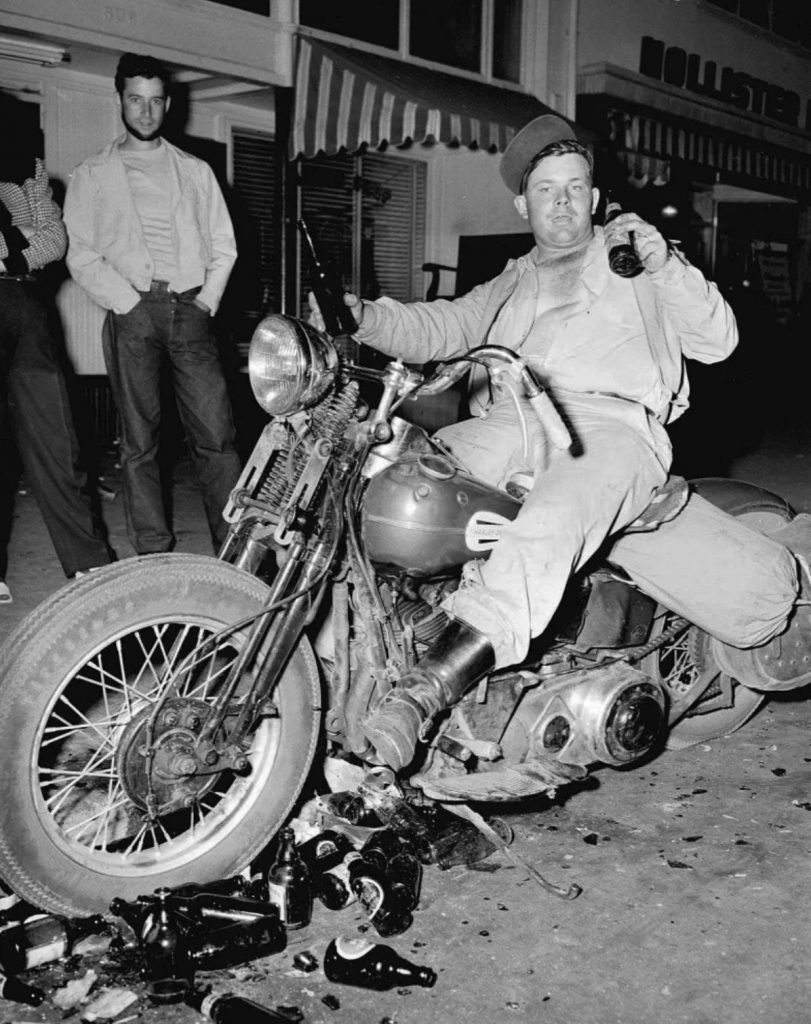 After 1947, black leather jackets became the second skin of rebels — a symbol anti-conformist lifestyles, restlessness, and lawlessness. Small town residents worried about motorcycle “hoodlums” and potential rampages. Marlon Brando cemented the image of the leather-clad rebel in his role in the 1953 film The Wild One. “Brando’s pebble-kicking stride, his insolent sneer, the rakish angle of his cap, and the casual straddle of his bike, identify him as a challenger of society’s values,” Bruce Boyer wrote in his book Rebel Style. “[The Wild One] clearly shows the opening chasm between the middle class, concerned with refinement and decorum, and the outsiders who show their disdain for the status quo.” The Twilight Zone later had an episode where three leather-jacket-wearing, motorcycle riding strangers invade a peaceful neighborhood (they were later revealed to be aliens). Leather jackets have been part of every rebel subculture since — bikers, rockers, and outlaws; beats and beatniks; modernists and mods; hippies and bohemians; punks and skinheads.

Those rebel associations hold remarkably strong today, even when conservative, establishment figures such as Cindy McCain and Sarah Palin wear black motorcycle jackets on TV talk shows. They’re also the reason why guys often pause when buying their first leather. They’re expensive, for one, and there’s always that nagging feeling that you might not be a “leather jacket kind of guy.” We like them because of their dark and dangerous associations, but worry that we’ll just end up looking like poseurs.

So, what to do if you’re interested in a leather jacket, but aren’t sure if the style is right for you? Like reading formality in suits and sport coats, there’s a language in leather jackets that can swing them towards different aesthetic directions. Whether you prefer something a little more fashionable and modern, or traditoinal and conservative, there’s assuredly something out there for you. Here are some things to consider: 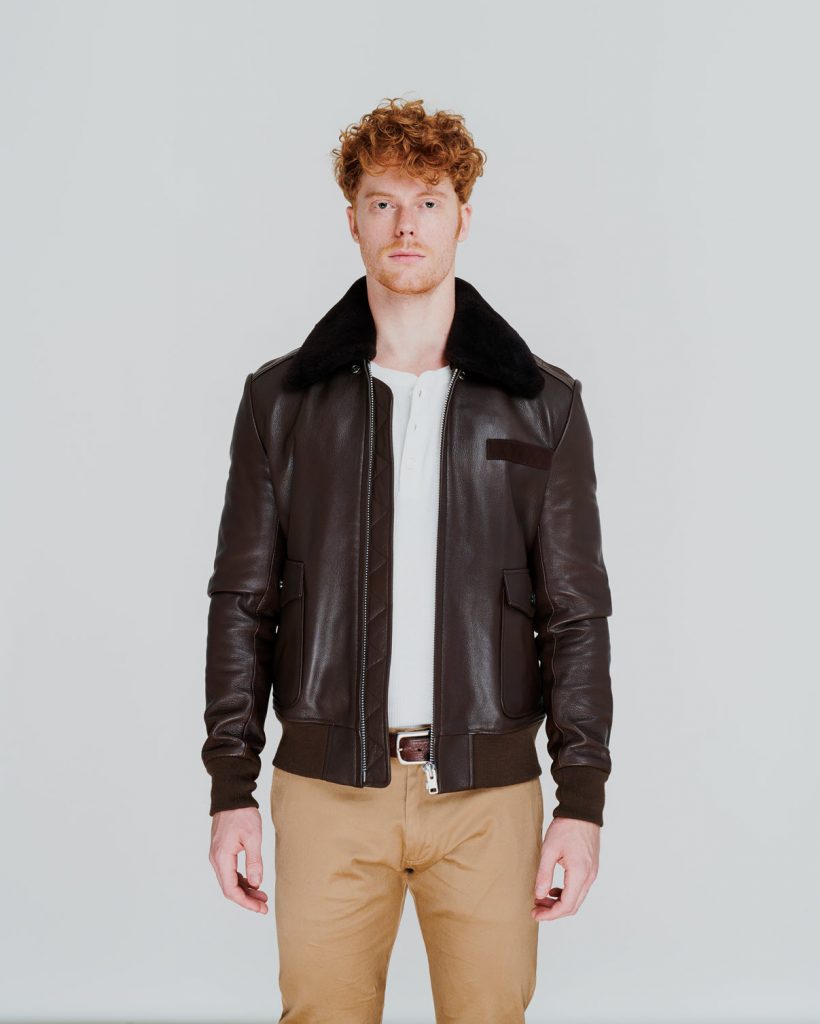 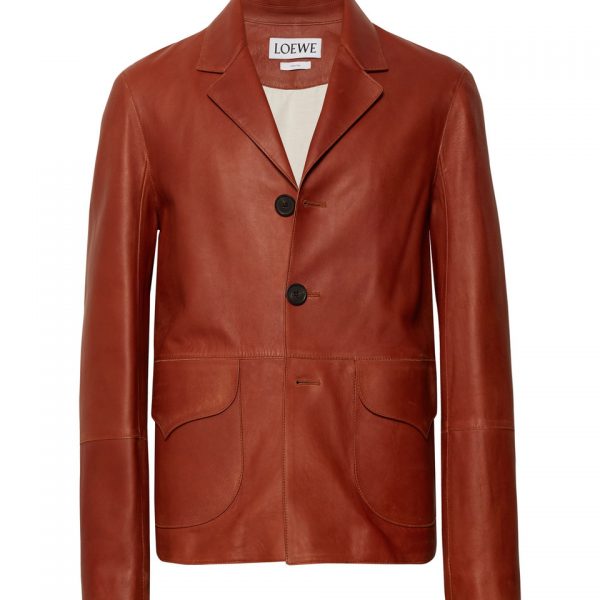 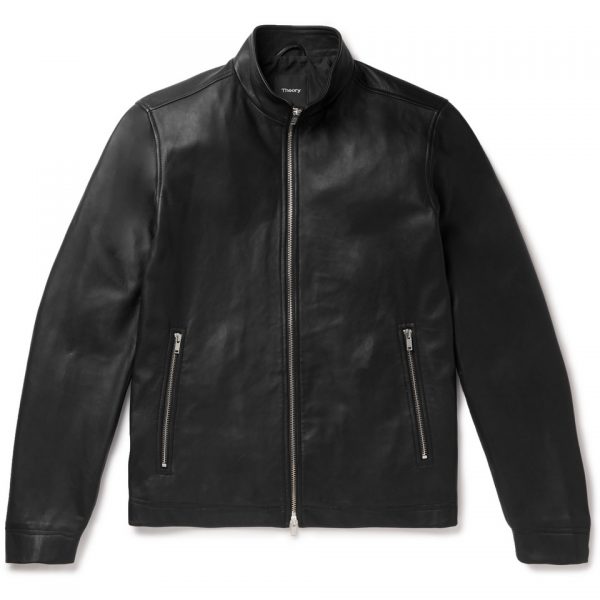 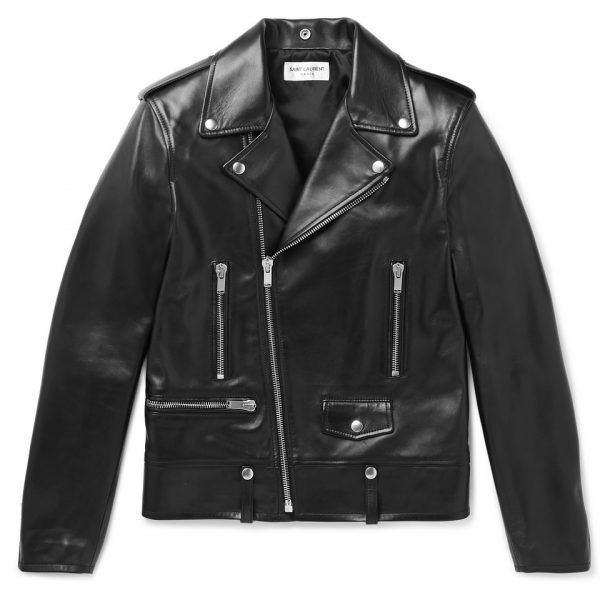 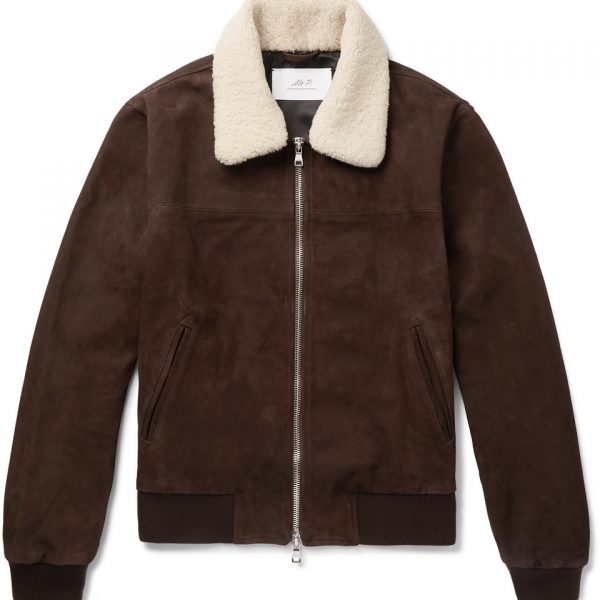 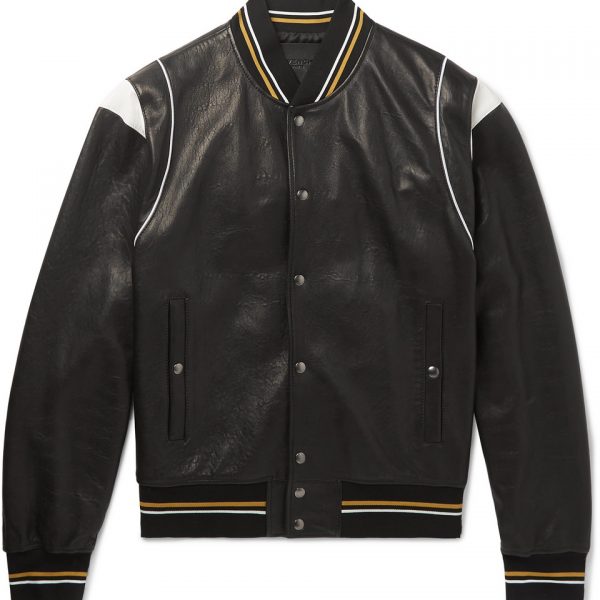 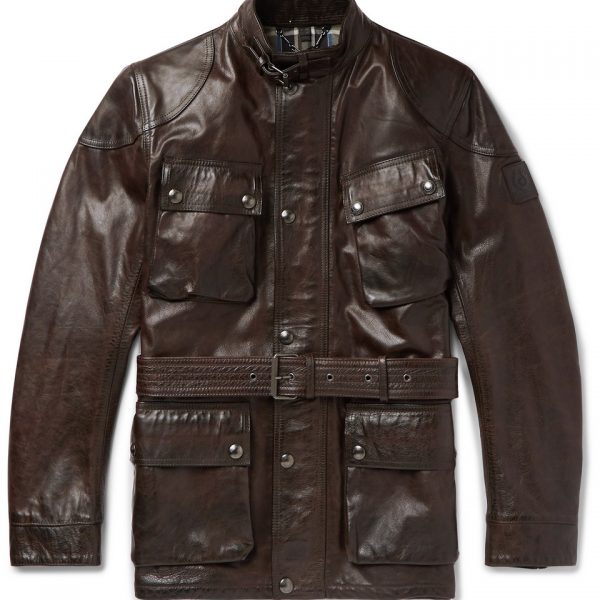 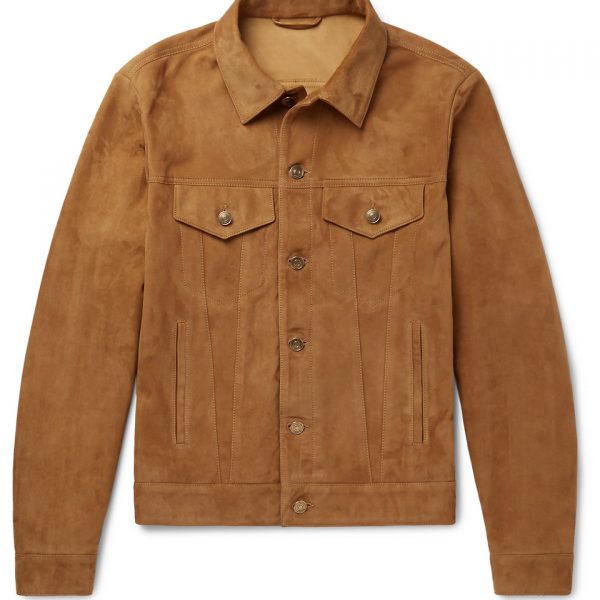 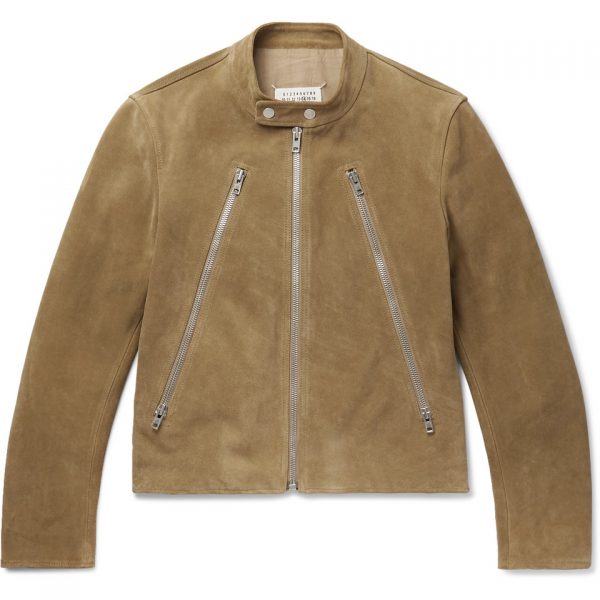 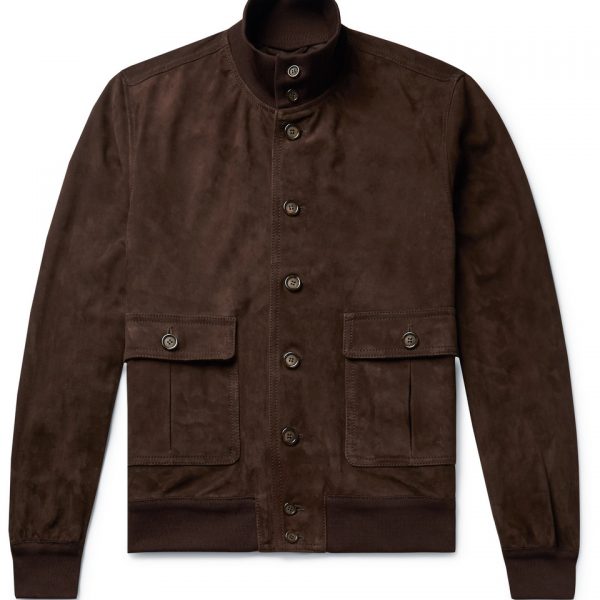 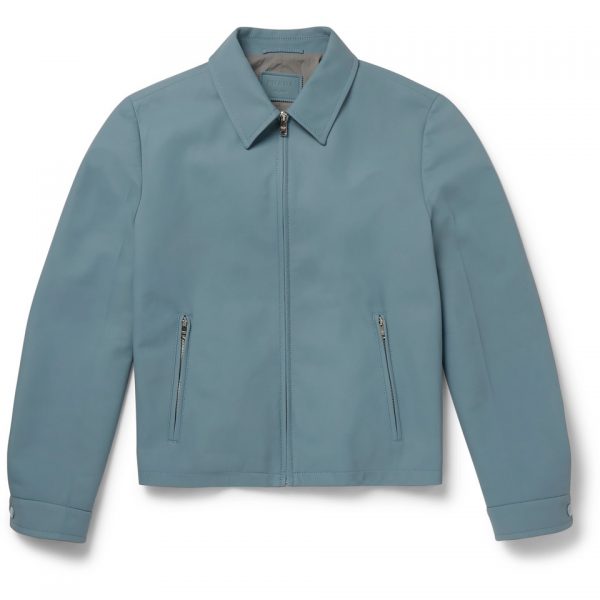 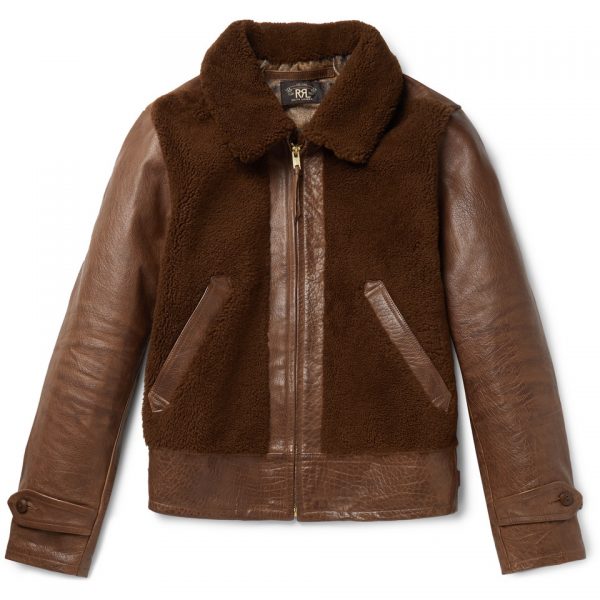 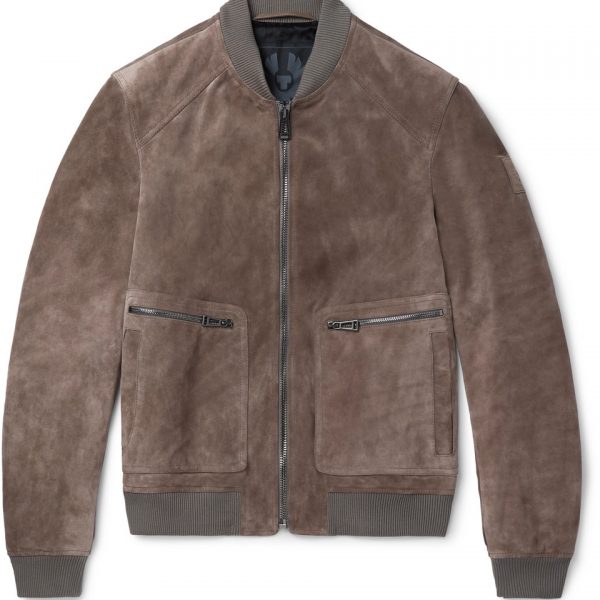 The first thing to remember is that leather is like any other material, such as wool, cotton or linen. It can be used to make nearly any style of outerwear, from dressy to rugged, traditional to the avant-garde. Broadly speaking, most leather jackets will fall into one of two traditions:

Flight Jackets: Flight jackets were originally made for the hide-busting activity of piloting aircrafts, but civilians have been repurposing bombers for almost a hundred years. The original pilot jacket was the A-1. The American Air Force originally spec’d it in a lighter weight capeskin, then finished the collar, hem, and cuffs with a knitted trim. The style’s most distinguishable characteristics include the button-front, which runs from the hem to the collar, and the stand-up knitted collar that helps frame the face. The A-1, however, was only used for a few years before being replaced by the more familiar A-2.

During the Second World War, the US military issued thousands of A-2s to fighter pilots. The jacket’s design replaced the button-front of the A-1 with a zipper and storm flap, and then changed out the stand-up knitted collar in favor of a shirt-style leather collar. The shoulders were given passants; the hem and cuffs retained their windproof knitted trims. The A-2 is one of few clothing items that can legitimately be called iconic — for many, it is the leather jacket. Like most bomber styles, the traditional A-1 and A-2 have blousy, slightly rounded silhouettes, although they generally look great on most men regardless of age or fitness.

By virtue of its popularity, the A-2 is also so unobjectionable, it can border on boring, but a well-cut A-2 is a great entry point into leather jackets. The A-1 makes more of a statement while still hewing traditional. For something a little less common, you can hunt for a G-1 or MA-1. The G-1 started as the Navy version of the Army A-2, but while the Army version sometimes includes a detachable fur collar, the mouton (sheepskin) collar is standard on the G-1. The G-1 also omits passants and the storm flap, and it features button-through pockets rather than snap pockets. The MA-1, meanwhile, was originally a nylon, synthetic-fill, knit-collared jacket developed for the pilots. MA-1s became popular with punk rock kids and skinheads in the 1970s and early 1980s, and in leather form, they become a little more fashion forward. 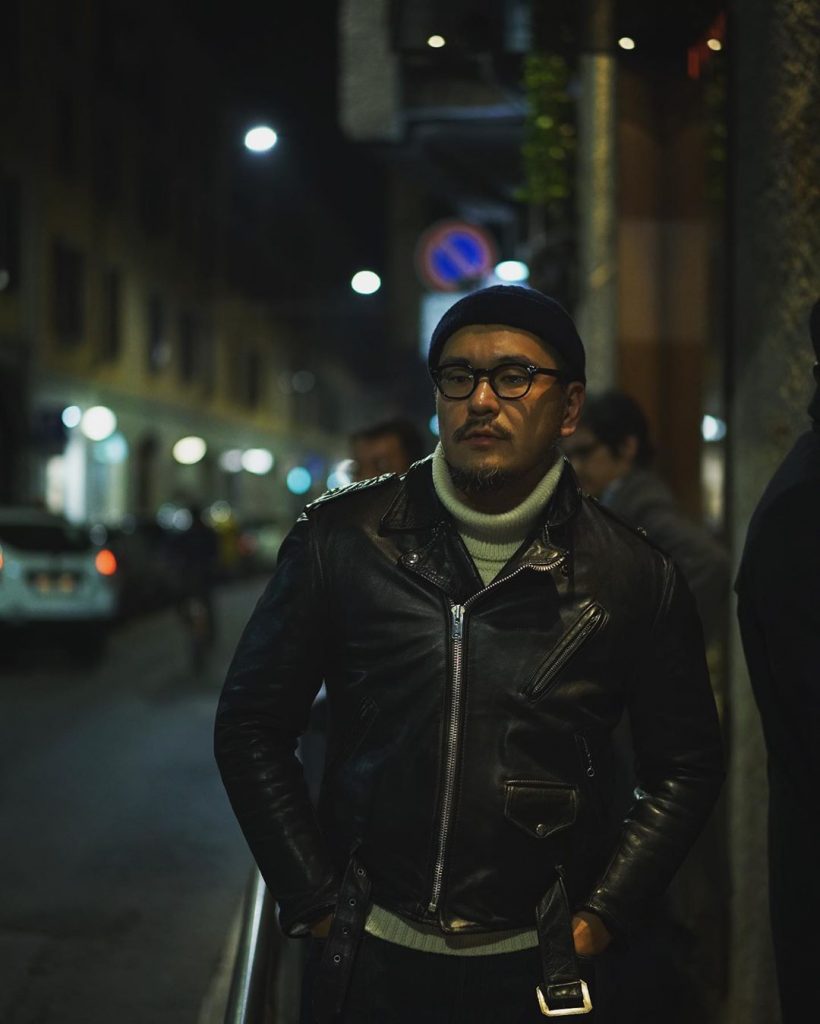 Motorcycle Jackets: Classic leather jacket styles often come out of the very practical purpose of driving or piloting some large piece of machinery. For moto styles, the earliest forms were actually repurposed A-1s, which drivers used to wear over their suits and sport coats. But as motor vehicles improved in performance during the inter-war years, and more men drove them, there was greater demand for tougher garments and different styles. Soon, Harley Davidson started producing a variety of “genuine” motorcycle jackets, and big retailers such as Sears, Robuck & Co., Montgomery Ward, and JC Penney added a section of “sport leather jackets” to their catalogs.

This is when we start seeing things such as the double-rider and cafe racer. Double-riders derive from “lancer-front” motorcycle jackets, which feature a kind of double-breasted closure (where one side of the jacket overlaps with the other). Eventually, this style made it into asymmetrical zippered form, most iconically represented through Schott’s Perfecto (pictured on George above). Sometimes these styles have details such as snap-down passants, metal-buckled belts, D-shaped pockets, and fur collars. All things equal, the double-rider, particularly in black, is the most “aggressive” of all leather jacket styles, if only because of its connection to motorcycle culture and rock ‘n roll, but in softer leather forms, it’s also commonly used for fashion purposes.

If double riders are too much for you, try a cafe racer, which is notable for its visual minimalism. The style was originally worn on circular or oval race courses comprised of wooden planks, where oil slick tracks demanded some kind of protection. Racers often wore flimsy, tight fitting, unlined leather racing shirts, which at some point metamorphized into the famous Buco J-100 and eventually what we now call a cafe racer. The style is typically sculptured to give a close fit, although not as close as early 20th-century shirt-style versions, and features zippered body pockets, zippered sleeves, and a simple, symmetrical zip front. Some have a reverse box pleat at the back to allow for easier movement on a motorcycle, although it’s not uncommon to see a plain back on fashionable cafe racers.

Other Styles: Flight and motorcycle styles aren’t the only leathers.  There are about a dozen more that reach various categories. To run through a few.

Tip: If you’re not sure about leather jackets, stick to the A-1, A-2, and cafe racer styles. Depending on their details, those can be more conservative and classic than most, making them suitable for casual offices and nights out on the weekend. 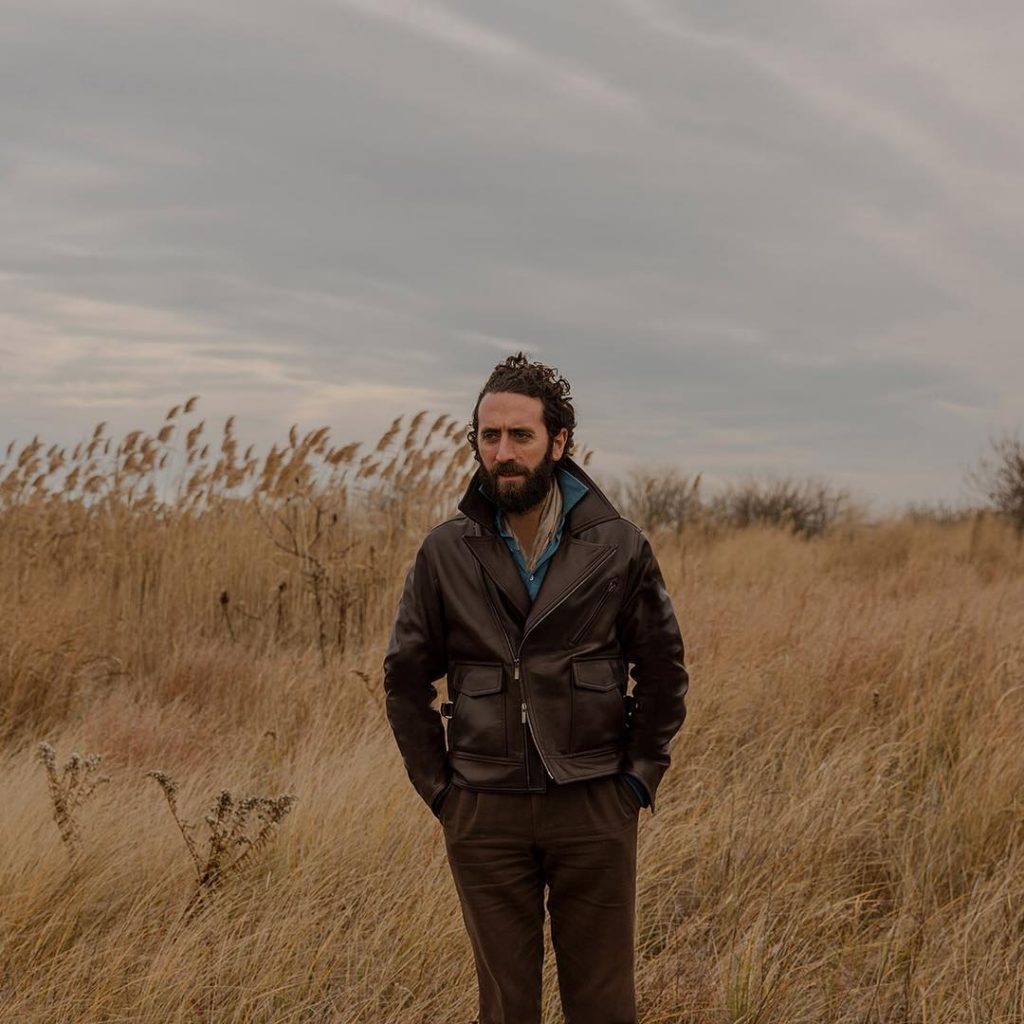 The styles listed above are just the general templates for leather jacket design. The rest comes down to the material and detailing, which can swing a jacket towards different directions — classic or fashion-forward, dressy or rugged, aggressive or conservative. Let’s first start with the leather:

When choosing a style, think of how a jacket’s design template and material come together in a way that works for your lifestyle and wardrobe. A rugged jacket, such as a goatskin bomber or cowhide cafe racer, can be worn with jeans, fatigues, and workwear-styled chinos. Dressier, slightly more conservative designs, such as a lambskin A-2 or cafe racer, on the other hand, can be worn with tailored trousers and dress shirts. In the photo of the Stoffa jacket above, you can see what a difference lambskin can make even for the most rugged of all styles, the double rider. Suddenly, the jacket transforms into something else — less workwear, a little more refined.

Tip: Again, if you’re worried about whether a leather jacket can work for you, pick a softer, more approachable leather, such as lambskin, calfskin, or even suede. Those will generally look less “aggressive.” A heavier, more rugged leather such as cowhide, can be paired with a cafe racer or A-2 bomber style for a very classic look if you’re cautious about looking overly fashion forward. 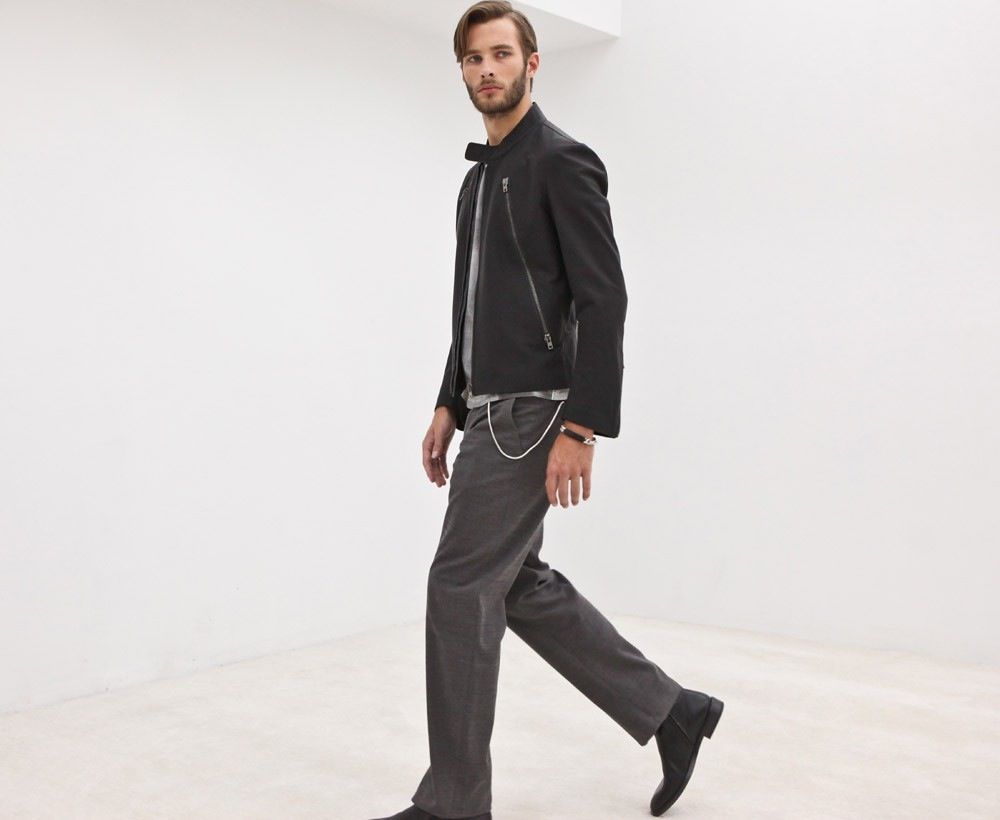 Pay Attention to the Fit and Details

Lastly, pay attention to a jacket’s fit and detailing. A very traditional style, such as a cafe racer, can be modernized with a softer, lambskin leather, bell-shaped sleeves, slim-fit body, and long, diagonal chest zips, such as the Margiela jacket you see above. The same style can be made from a heavier leather, fitted with a traditional silhouette, and come with traditional detailing, such as an Aero Board Racer. The first will be more contemporary and easier to wear with both jeans and tailored trousers. The second is a little more classic and better suited to traditional combinations, such as jeans and t-shirts.

Once you have a sense of what you’re looking for, shop first at the brands or stores where you normally buy your other clothes. A trad-y guy in button-downs and flat front chinos may find his perfect leather at shops such as Brooks Brothers and Ralph Lauren. A guy who favors classic-contemporary clothes might want to look at the selection of Golden Bear and Valstar jackets at Mr. Porter and No Man Walks Alone. Workwear aficionados will probably like RRL, Fine Creek Leathers, and Schott.

Tip: Most guys will look good in a Valstarino, which is a citified, Italian version of a traditional American A-1 jacket. It’s a style that goes well with slim-straight jeans, flat front chinos, and even tailored trousers. It’s something you can wear to work and weekends, and it’s light enough for spring and fall. The silhouette is a little rounded, so if you prefer a slimmer look, try a cafe racer. Aero’s Board Racer is great with jeans, while Brooks Brothers often has racer styles that can be worn in more conservative environments. Todd Snyder, Enrico Mandelli, Taylor Stitch, Sandro, and Falcon Garments are also worth a look.