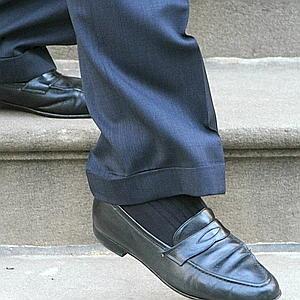 Lots of folks have been emailing me about this New York Post story which reports that New York mayor Michael Bloomberg has only two pairs of work shoes.  Of course, Bloomberg is extraordinarily rich, thanks to his business information empire, so he can afford as many pairs of shoes as he’d like, so the story is, “he’s so thrifty!”

There are only two problems with this narrative, in my mind:

A)  He has like half a dozen mansions, so… thrifty he ain’t.

B)  They’re both loafers.  Loafers with suits?  BOOO.

Anyway, if you want to talk about true-blue political thrifty-shoe style heroes, it begins and ends with Adlai Stevenson.