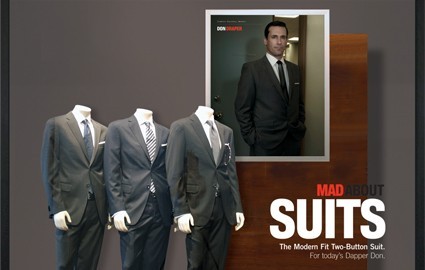 Our friend Thom Wong from The Sunday Best was foaming at the mouth over the new Banana Republic Mad Men line. I asked him to share his thoughts with our readers, and this is what he sent. – JT

My advice to you if you’re thinking of buying something from the Banana Republic Mad Men® collection – wait. It has all the hallmarks of being one of those deep discount items come November, and most of the pieces won’t be wearable until then, anyway. I could be wrong but I really hope not – this collection makes about as much sense as a Hollister line inspired by people who frequent malls.

Created by the admittedly talented Mad Men designer Janie Bryant, this misguided “collaboration” has taken good style and literally reduced it to a costume. Hey, Banana Republic: men were already shopping at your store thanks to the Mad Men phenomenon. They don’t need you to label the clothes for them. Men have long been taking tips from the show, namely that a certain drape and a tailored fit and good quality materials look awesome on a man. This collection pisses all over that.

Overt self-awareness is the opposite of style, which is at least half of the reason why so many men feel ridiculous at weddings. Trussed up in an outfit someone else has chosen, most grooms look like they just broke into a stranger’s closet and are now wearing his clothes. Costumes are for acting, and a suit marked Mad Men is a costume. It says, “Look at me, I’m playing dress-up.” I call shenanigans.

It doesn’t help that the items in question are virtually indistinguishable from anything else at Banana Republic, largely because the BR crew have been taking cues from Mad Men for the last three seasons. Looking at them I feel the same way I did when I came across a McDonald’s poster advertising Chicken McNuggets®, now with 100% chicken. Thanks for the heads up, McDonald’s!

I know that Put This On readers will not be fooled by this blatant cash grab, but we shouldn’t feel smug about anyone who does buy into it. Make no mistake about it – this is an affront to all men, everywhere. BR is basically calling us stupid and lazy, and between the Ed Hardy and “Megan Fox is hot” nonsense we have to suffer through, I say enough is enough. This has nothing to do with Janie Bryant, who I’m sure is lovely and spends her spare time trying to cure cancer. But if we buy into this now it’s only a matter of time before we’re spraypainting our heads and calling it hair. Rise up.