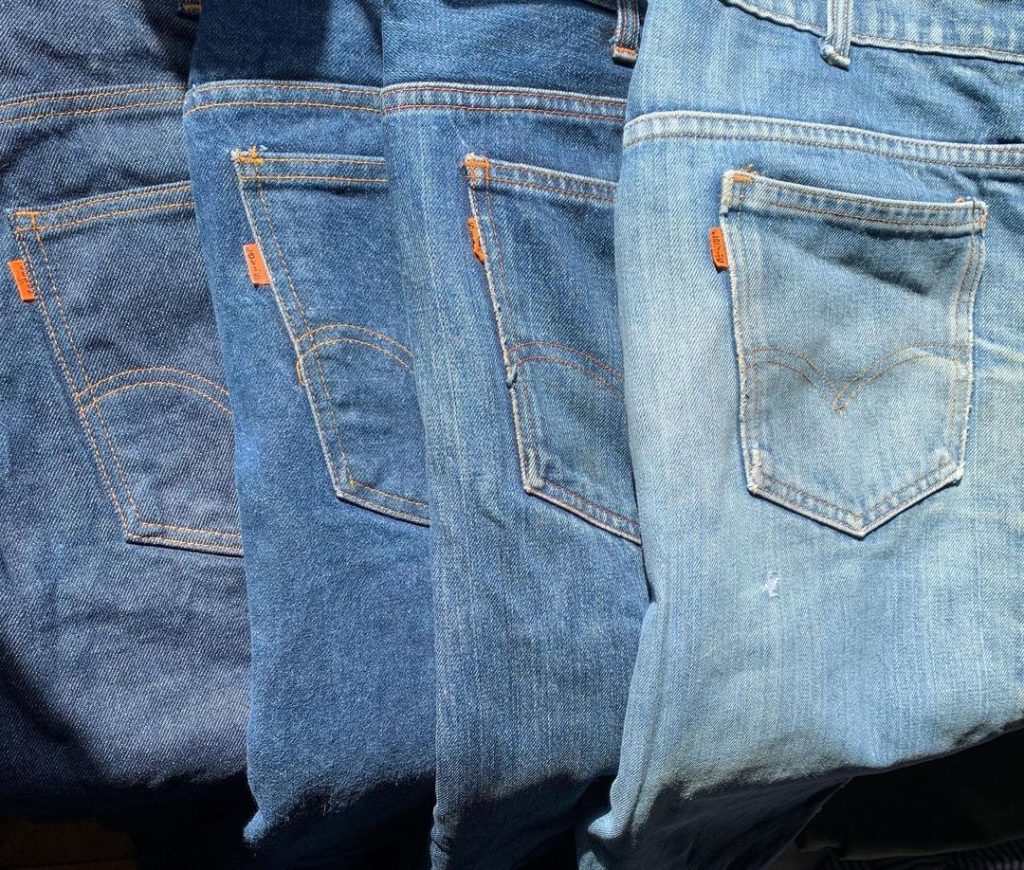 Menswear, like any other area of interest, can be a rabbit hole. As you learn about different garments and construction techniques, there can be a lot of pressure to own “the best.” Of course, this can become ruinously expensive as you jump from one area of your wardrobe to the next, purchasing “the best” of handwelted shoes, bespoke suits, and fine Scottish knitwear.

The good news is that building a wardrobe doesn’t have to be costly. If you focus on dressing well, rather than collecting “high-quality” items, you can find many wonderful things on a shoestring budget. To give you some ideas, we polled a few stylish guys to see what are some things in their wardrobe they love that cost less than $100. What appeals to them about these items, and what makes them such good buys? 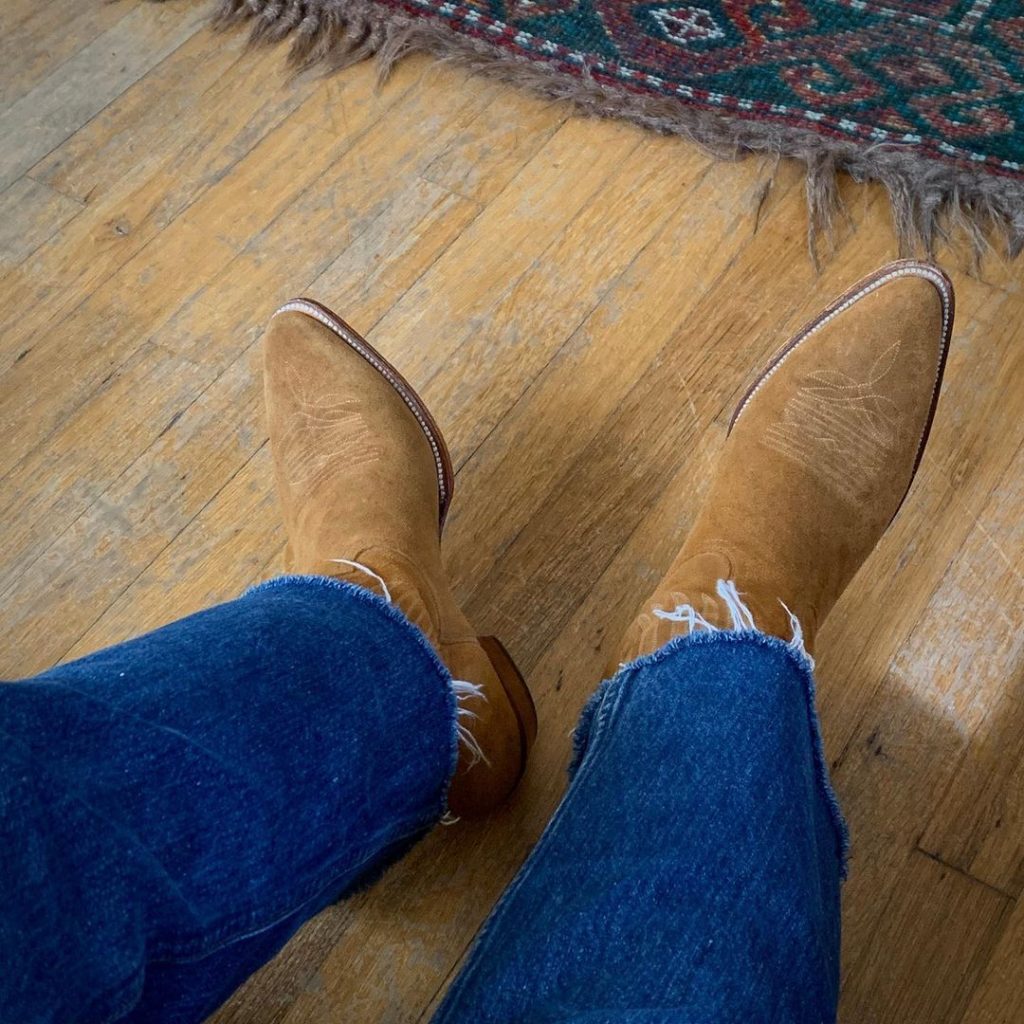 “Although I have a few expensive pairs of jeans, I think it’s always a good idea to have a few favorite, affordable pairs on hand,” says Peter Middleton, owner of Wythe New York. “A well-worn and washed pair of jeans is a huge part of my wardrobe, and it helps to own a couple.”

Peter’s favorite pair of jeans for under $100 are Levi’s 501s. “I generally buy them used. I love the fit, even though it’s never consistent. I generally have about four or five pairs I rotate through, and each feels and fits differently—jeans can and should be so personal. They are something that shows your lifestyle and changes with you.” 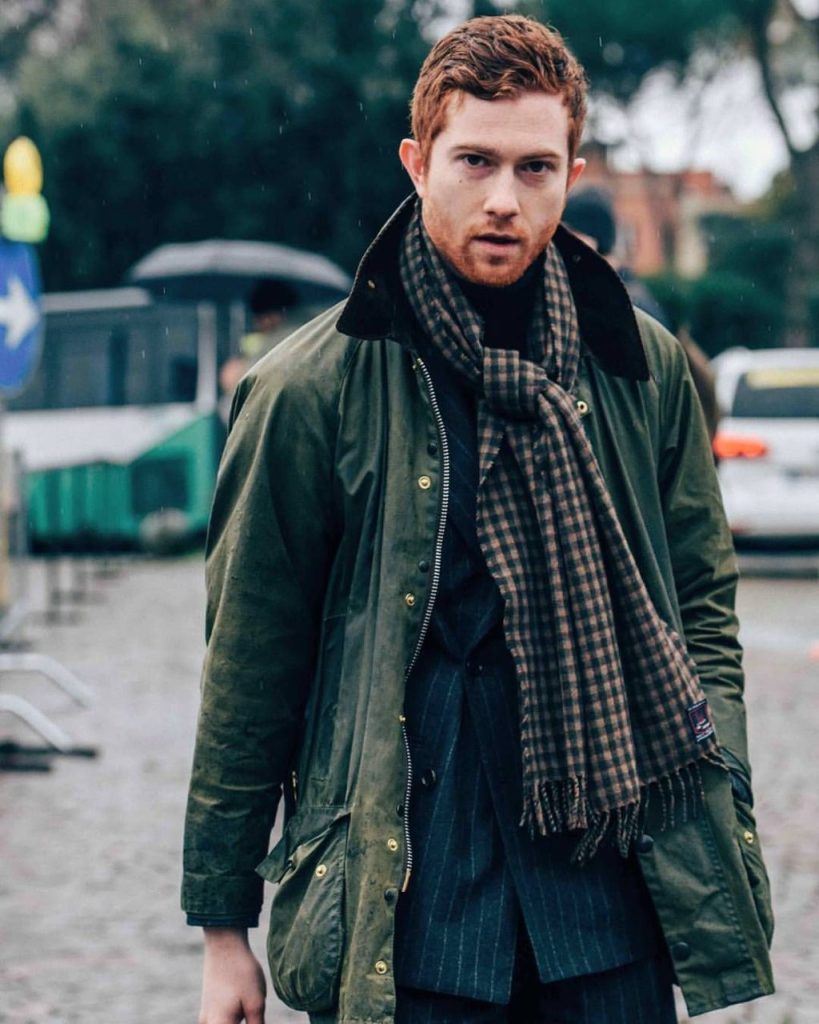 For under $100, Jake Grantham, owner of Anglo-Italian, recommends a vintage waxed field jacket. “The Barbour jacket, or something similar, is a staple of British style,” Jake explains. In addition to being functional in cold, damp weather, it’s something you can stylishly layer over suits or a Shetland knit paired with jeans. “It’s one of those things that can stretch across the formal and casual sides of your wardrobe.”

A brand new Barbour will run you close to $400, but secondary markets are full of vintage pieces for much less money. Jake adds that buying vintage allows you to inherit that “gnarly patina” that someone else put in the time to develop. Budget-conscious shoppers can also look into more affordable labels such as John Patridge, which can be found for as little as $50 on eBay UK. ” 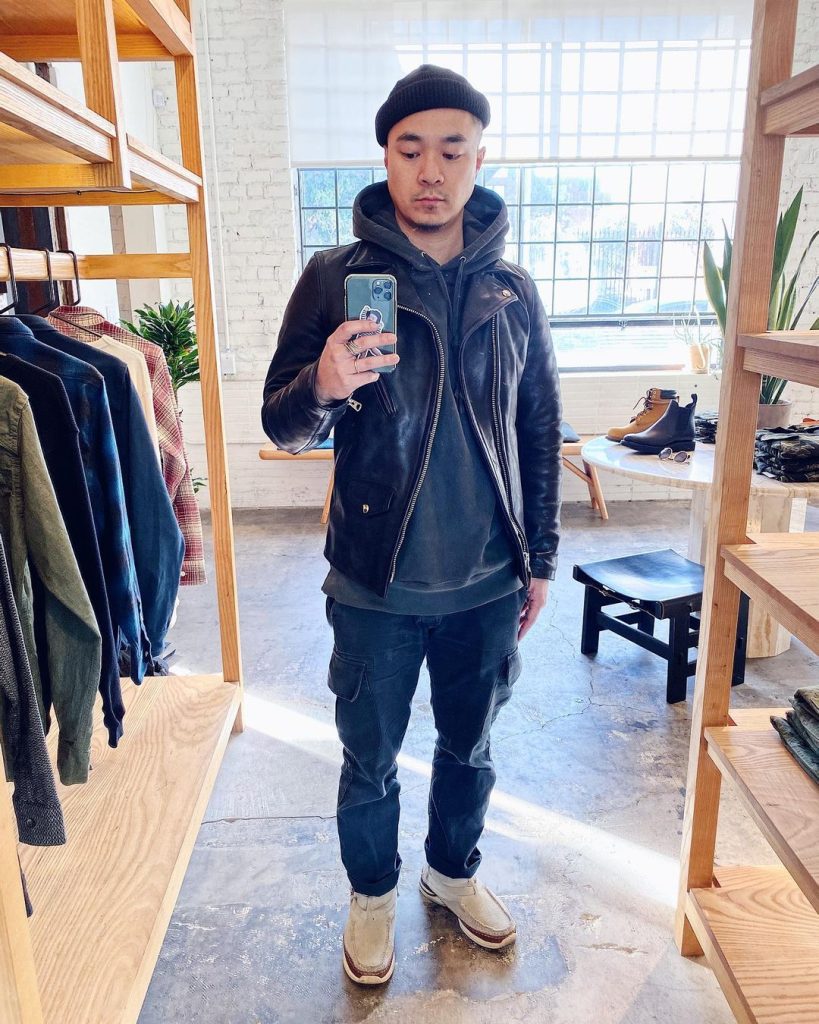 Most people will balk at the idea of spending $100 on a beanie, and Johan Lam of 3sixteen sympathizes. He hesitated for weeks before purchasing his Buzz Rickson x William Gibson watch cap because he felt he could find something similar for less than half the price. But eventually relented, and the accessory has been one of his wardrobe staples. “I’ve had it for over a decade now, and I’ve taken it with me on every single trip throughout the world, surprisingly without losing it. It’s super versatile, keeps its shape amazingly well, and is easy to clean.”

One of the reasons why Johan’s beanie cost so much is due to the material. “It’s 100% worsted wool, so it keeps me warm in cold climates, but it’s also fairly breathable, allowing me to wear it year-round in Los Angeles. I’ve gone on to buy the other colors they offer, but if I could only have one piece of headwear for the rest of my life, it would be this black wool version.” 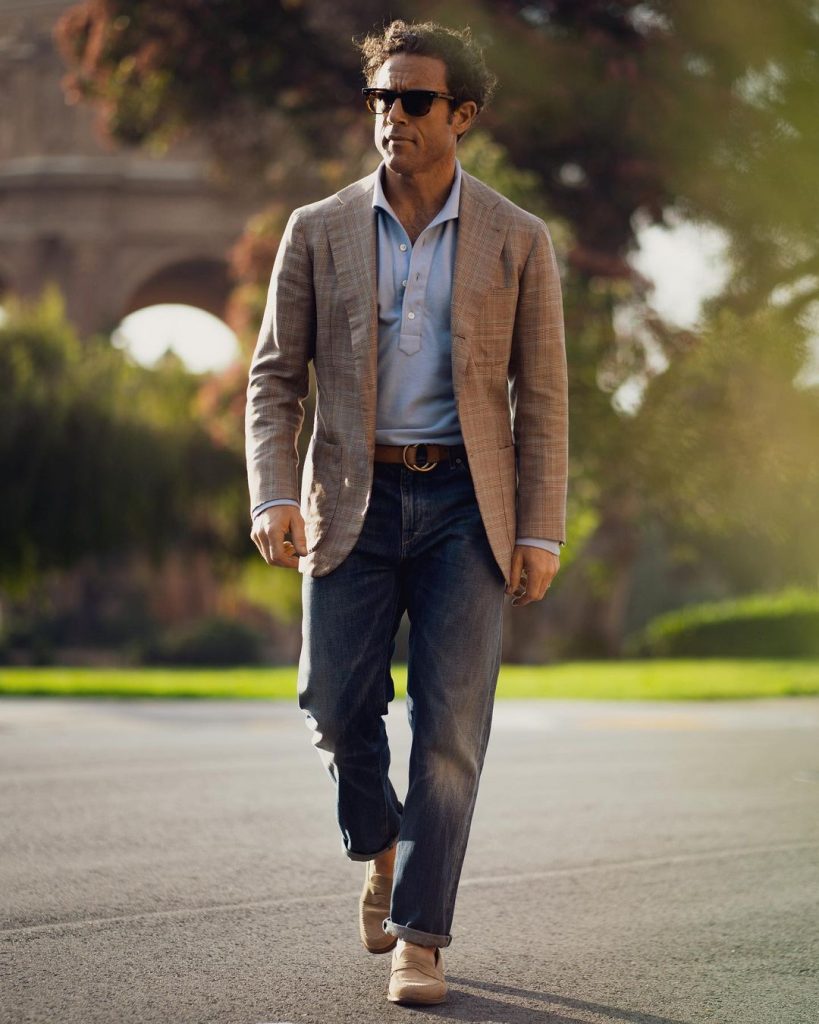 Peter Zottolo, the US editor of Plaza Uomo, loves a good pair of mid-rise jeans. “One of my favorite jeans is from Levi’s Made & Crafted. It’s a weird line that constantly changes since it represents current trends as opposed to Levi’s classics. In other words, if nothing tickles your fancy this season, there’s a good chance something will next.”

Since Levi’s Made & Crafted is widely available at many retailers, Peter points out that it’s easy to find their pieces on sale. In fact, Peter finds that “it’s routinely discounted by 50% or more.” “Years ago, I picked up a lightweight pair with a higher rise, fuller thigh, tapered leg, and moderate distressing that didn’t look too artificial. Given that most of my jeans are heavyweight and more workwear-inspired, this filled a gap that allows me to wear jeans with tailored fits. Did I mention they were about $50?” 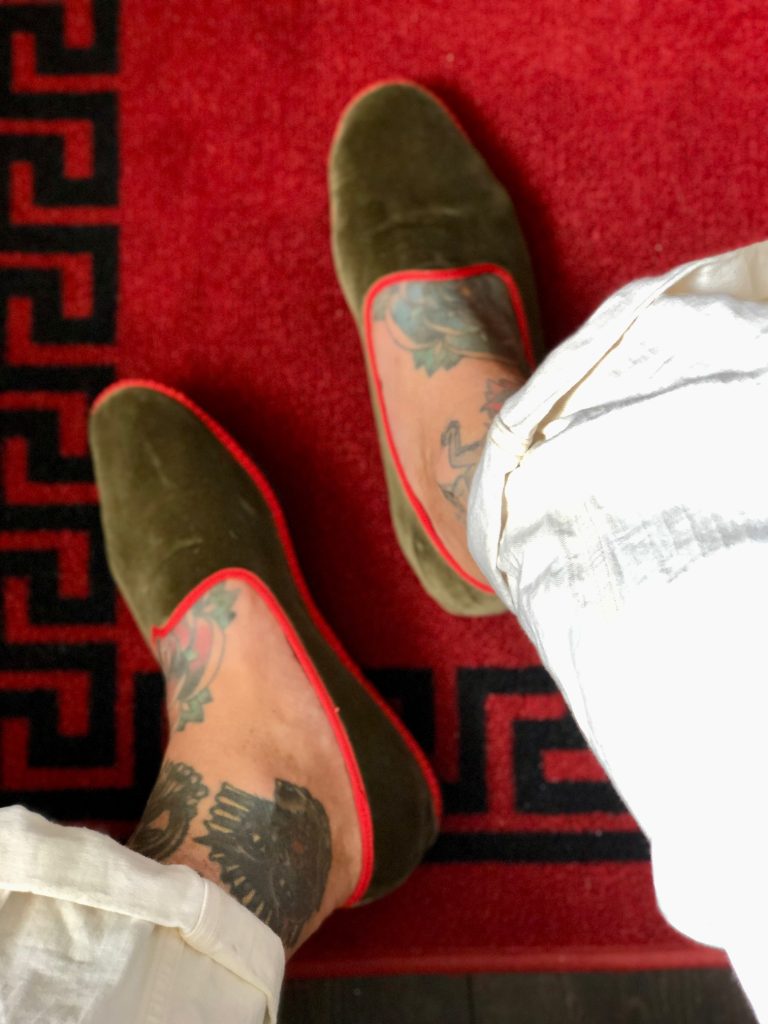 “I think the best candidate is the Furlane or Venetian Slipper,” suggests Tony Sylvester, a menswear writer and the owner of AWMS. “In the summer, I tend to wear sandals around the house; in the winter, I’m in Grecians and Alberts. This time of year, as an ease into the cooler season, Furlanes are just the ticket.”

Tony explains, “The story goes that the ladies of Fruili in Northeast Italy used to make simple scarpez with uppers made of leftover scraps of fabric sewn onto old bicycle tire soles. By the 19th century, the gondoliers of nearby Venice valued them for their non-slip functionality—a sort of proto Van Doren deck shoe, if you will.”

“These days, the uppers are generally velvet in earth and jewel tones, often with contrasting piping around the top; the soles are still handsewn in a manner not unlike an espadrille. The shape is pleasingly simple in contrast to or in cohort with the rich colors and fabrics. The gentle upward curve of the vamp gives the nod to Venice’s heritage as a gateway to the east.”

“Mine are in an olive green with a bright red sole and piping and are from Vibi Venezia, but plenty of Italian brands make them, all around the 70-90 Euro mark. I keep mine strictly indoors, but they’re robust enough for outside activity. They won’t last forever, of course, but neither will more expensive brands, and these are a fraction of the cost. “ 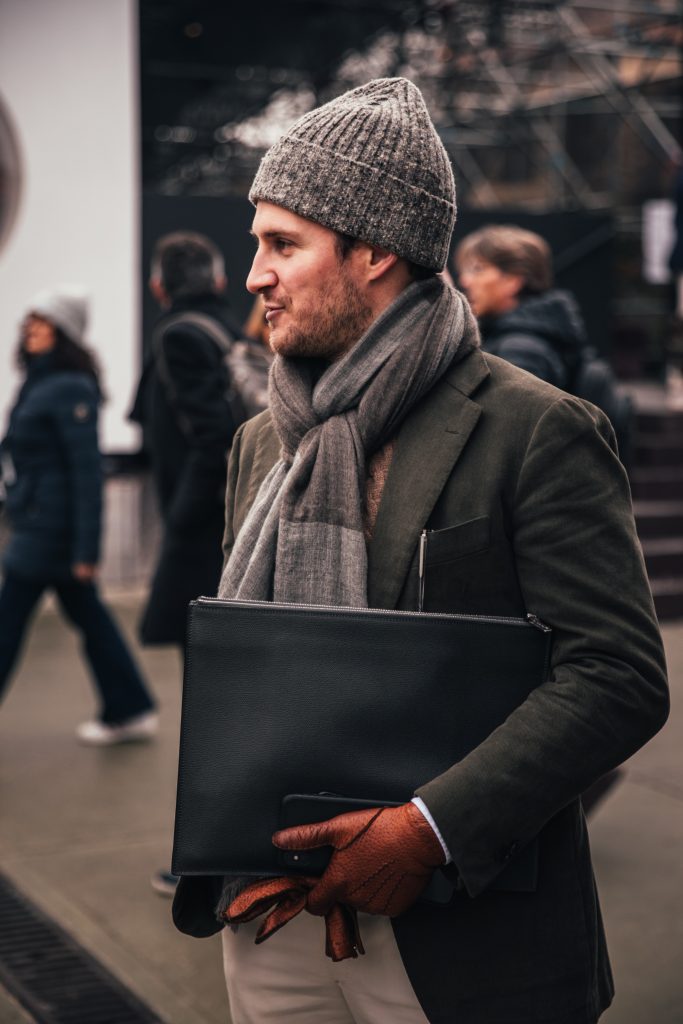 Like Johan, Jeff Hilliard of Hodinkee believes that a good beanie is worth the expense, and his favorite is from Drake’s. “I’ve had my Drake’s Donegal beanie for probably 8 or 9 years. I must have spent about $60 or $70 on it.” Jeff originally purchased it to deal with an awkward in-between period when growing his hair. “I quickly realized that I couldn’t just run out of the door with wet hair. My Drake’s beanie was like my comfort blanket and has held up incredibly well.”

Donegal, a woolen yarn made in Ireland and known for its characteristic flecks, is the perfect material for winter. “It’s the perfect weight and warmth, and since it’s loosely knit, it doesn’t destroy your hair when you put it on. I’ve worn it with everything from pajamas to black tie, so versatility is about as good as it gets. My hair is a bit shorter now, but I look forward to wearing my Drake’s beanie each winter when the temperature drops.”

In addition, Jeff is also a big fan of Belafonte t-shirts. He recalls purchasing his first shirts on a work trip to London in 2018. “One trip, I decided to spend the weekend getting to know the city better and walked into Clutch Cafe, a store specializing in Japanese, vintage-era brands, many of which I had never heard of. I’ve always been a proponent of hard-wearing clothing, even if it’s a bit uncomfortable at first—stuff that you have to put through the paces before it wears out. I must have spent a few hours there and ended up walking out with some t-shirts from a brand called Belafonte.”

When Jeff first wore the shirts, he found them borderline uncomfortable. Still, he loved them, and now four years later, he still wears them weekly. “If I ever feel overwhelmed with getting dressed, I usually throw on jeans and a t-shirt. I remember thinking $90 was a lot to spend on a t-shirt, but years later, they are still my go-to.” 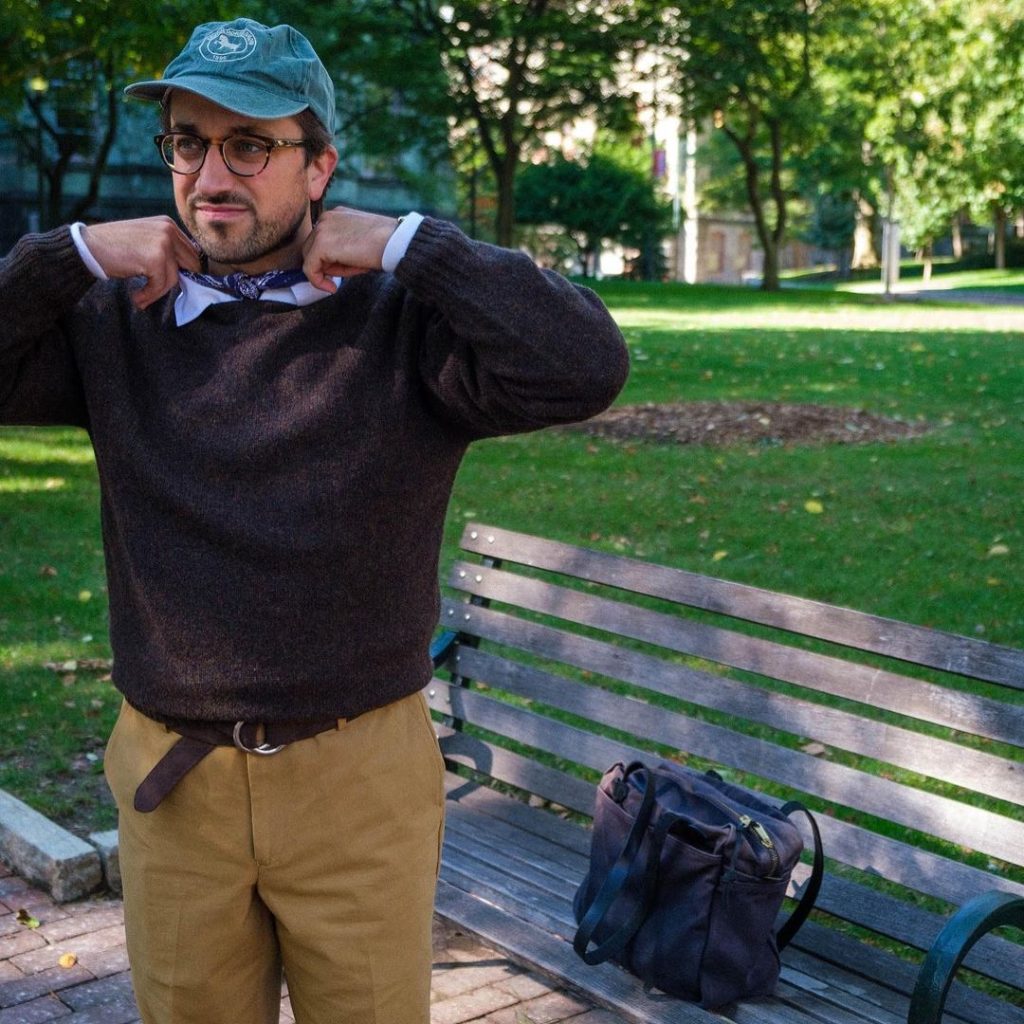 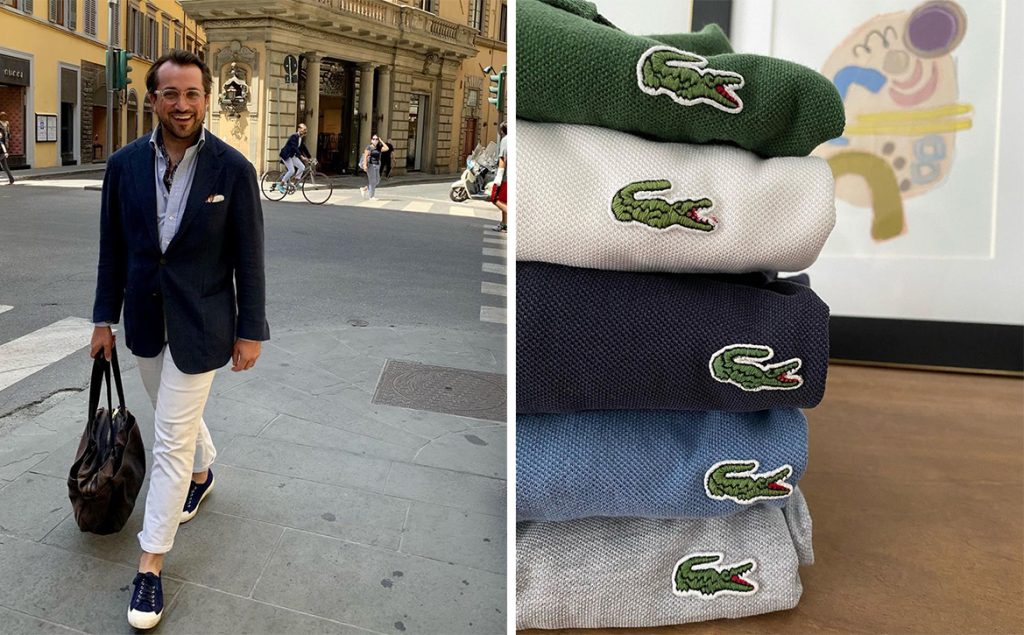 Glenn Au, the owner of Juniors, looks stylish and comfortable in all the outfits he posts online. He also shares that many of them are composed of “under $100” items, such as the floppy “dad caps” that frequently make an appearance on his Instagram (those are less than $35). “I try to buy ones that are tied to something special to me,” he explains. “I have fly fishing-themed ones and one with our chihuahua’s face on it. My favorite is a white dad cap I bought while on a trip with my wife to Chautauqua Lake.” On a basic level, dad caps keep the sun out of your face and hide a messy head of hair. But they also complement the outfits Glenn tends to feature on his Instagram, such as chinos with oxford cloth button-downs and Shetland knits.

In addition to dad caps, Glenn also loves Lacoste polos. “You can find vintage ones for under $50 on eBay or the right thrift shops,” he says. “My favorite one is a navy polo my wife bought me for my birthday in 2020. It was such a nice gift during a difficult time. I wear Lacoste polos all summer and then into fall. Extra points if you pair them with a dad cap.”

Lastly, Glenn is a fan of Superga sneakers, which typically cost $65 brand new. “I found this pair in Florence during Pitti Uomo, and they’re a vintage version before the brand name Superga was born. They’re true Italian Army trainers.” Glenn enjoys how they have a perfect balance of sportiness and can be worn with everything, including casual suits. “I can’t imagine another sneaker I would wear in the future. Finding them in Florence gives them sentimental value, and I love that about any piece of clothing, new or used.” 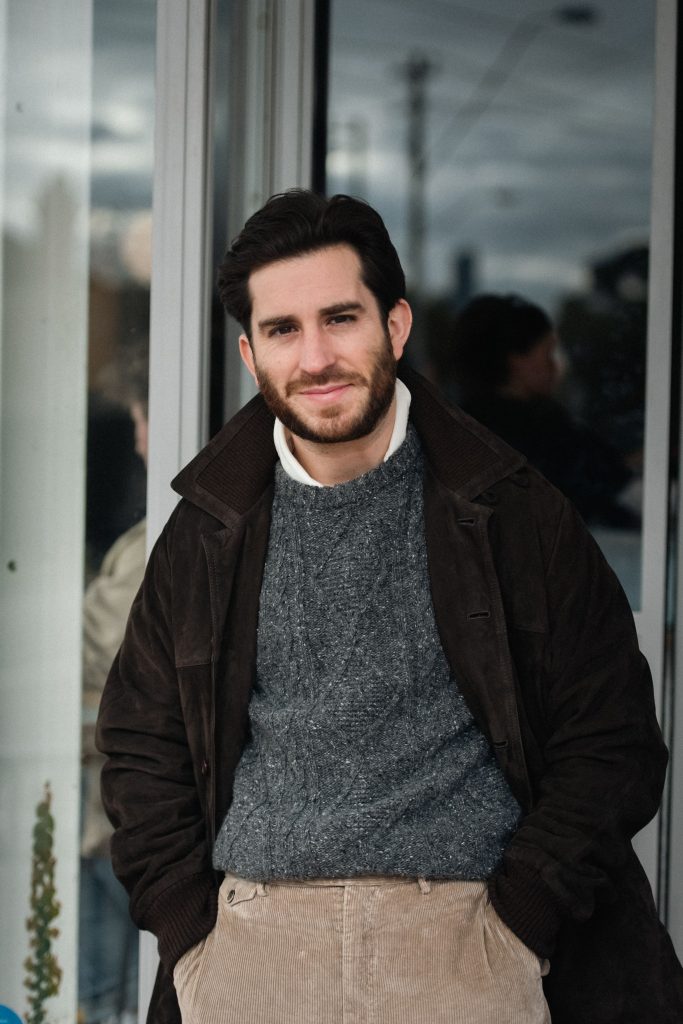 One of Christian Kimber’s favorite things for under $100 has nothing to do with clothes. “I love niche fragrances, especially oils, since they last longer.”

Christian likes to support smaller labels that use natural ingredients rather than synthetics. Among his favorites are Maison Louis Marie and AYU. “The reason I prefer oil fragrances is that they’re subtle and come in compact packaging that works so well for travel,” he explains. “Most are within carry-on luggage liquid limit requirements, so they can easily pop into my toiletries bag when I’m going interstate or abroad.”

Another reason why Christian loves fragrance oils is that they can be more delicately applied, so there’s no “cloud” around you. “If you’ve just left work and are commuting to meet a friend in town and want to freshen up, dab a little oil, and you’re done. The whole metro carriage won’t have to deal with you spraying perfume everywhere.”