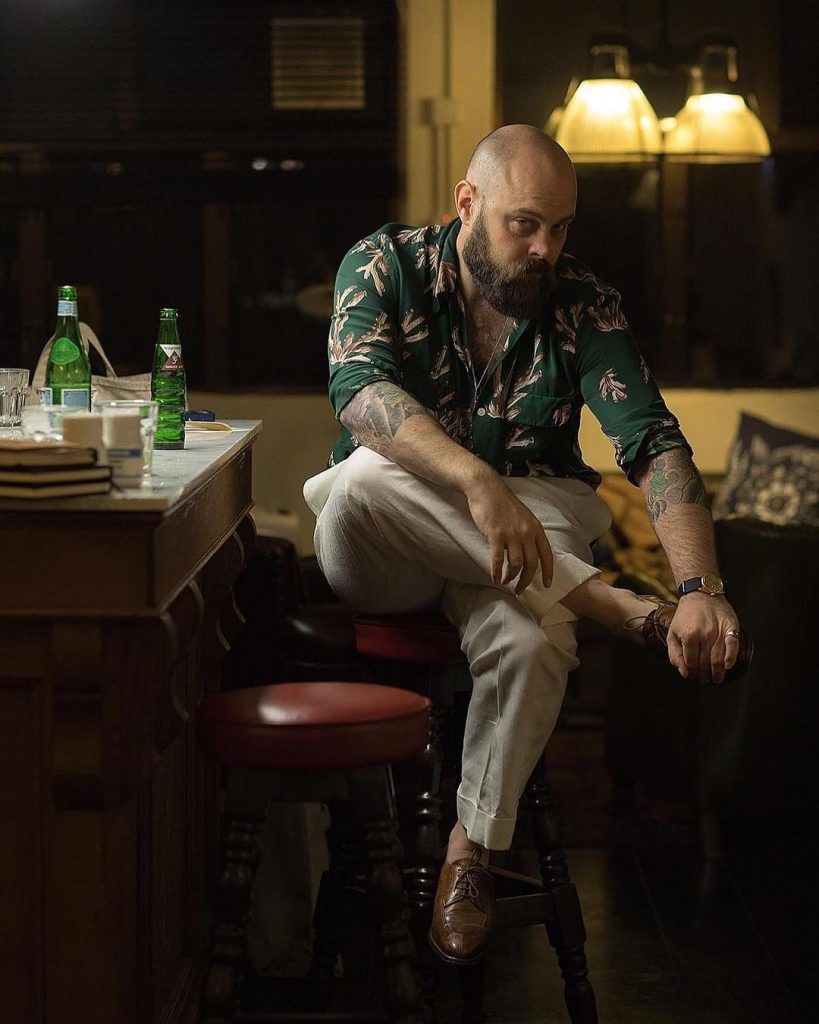 A couple of years ago, inspired by Pete’s posts on vacation-styled shirts, I bought a navy, pineapple print button-up from Two Palms. I must have clicked the wrong button because I don’t remember ordering the rayon version (the company’s shirts come in two materials, one rayon and the other cotton). But it turned out to be a happy accident. When the shirt came, it was soft and silky, felt cool to the touch, and draped better than even the finest of Sea Island cotton. Since then, more than diversifying the patterns in my wardrobe, that shirt has inspired other rayon purchases — a pair of wide-legged Lemaire trousers, some custom-made rayon-linen pajamas, and of course a few more rayon tops.

Rayon is one of summer’s most magical materials. Unlike heritage fabrics, it doesn’t come with a mythical or heroic backstory, such as the one about how sailors invented waxed cotton when they spread linseed oil over their rain capes (allegedly, those capes were made from sailcloth). Instead, rayon is a half-artificial fiber that comes out of the 20th century’s obsession with technological progress.

In his book American Plastic, which explores the cultural history of one of today’s most hated materials, American Studies professor Jeffery Meikle describes plastic as a “child of the Great Depression.” Like plastic, the foundations for rayon were laid much earlier — sometime in the mid-1800s — but the material didn’t start becoming widespread until the interwar period. The optimism expressed by rayon’s promoters during this time verged on utopian. Marketing materials touted it as a human invention that improved on nature, suggesting it could do anything and everything. This was, after all, the era of modernism, when people felt technology could get them out of economic and social problems. The hope of industrial modernity was expressed through Art Deco’s sleek lines and Futurism’s glorification of machines. Ezra Pound’s 1934 injunction to “Make It New!” would later serve as a shorthand for modernism’s love for all things novel. So it’s no surprise that, when rayon was introduced as a better and more affordable alternative to silk, people were eager to get with the times. 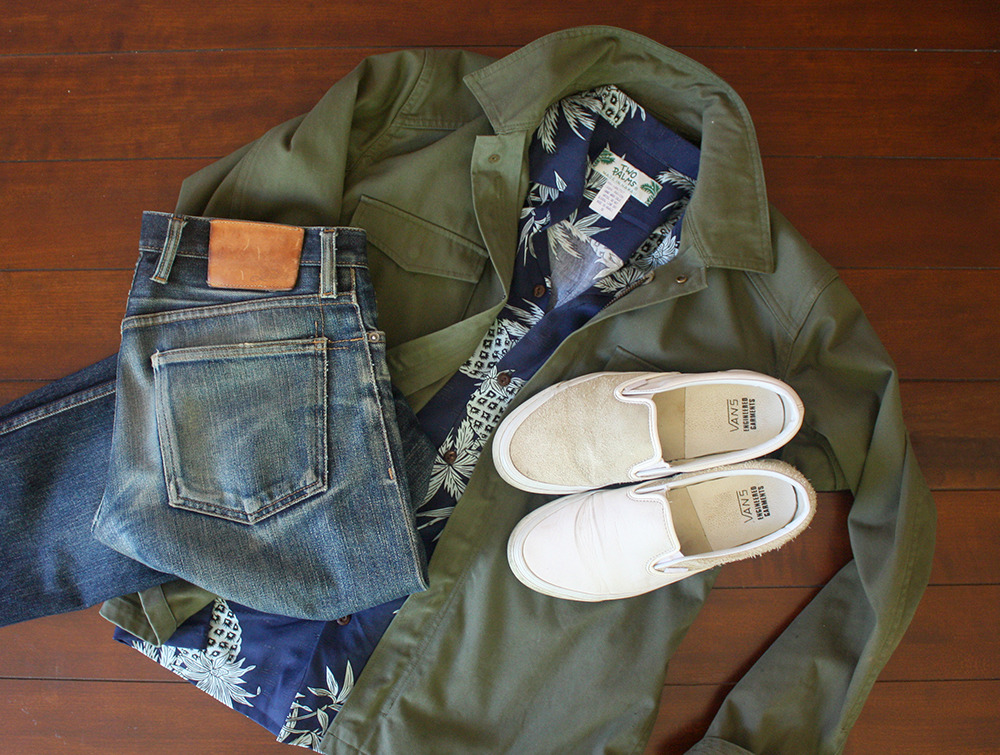 Today, people have a much more fraught relationship with technology — we’re both addicted to our machines, but acutely aware of the plastics that wind up in our landfills and the synthetic microfibers that end up in the ocean. Consequently, many people (reasonably) prefer natural fabrics over synthetic ones. Yet, rayon escapes this scrutiny. Perhaps it’s because rayon is still considered a traditional fabric, and people assume things in the past were always better. Or maybe because rayon is only half-artificial. Most rayon is made from mashed-up wood pulp, which has been chemically processed and then extruded through a machine, much like how a chef might make spaghetti. Those strands are then spun into yarns, which in turn are used to make fabrics. In textile books, no one seems to agree whether rayon should be classified as natural because it’s made from regenerated cellulose fibers, or artificial because of its chemical processing. Perhaps it’s both.

Rayon’s continued popularity may also have something to do with its remarkable properties. The best bespoke tailors in the world, including those on Savile Row, still line their suits and sport coats in Bemberg, which is a type of rayon. Bemberg wears cooler than silk, doesn’t hold odors as easily, and is harder wearing. All that, on top of the fact that it’s cheaper, and it’s hard to justify using silk at all aside from bragging purposes. Similarly, high-end undergarments are often made from modal, which is a type of rayon produced from beechwood. Modal-blend underwear feels silky and smooth, wicks sweat, and holds up better to repeated washing.

For summer, rayon has almost every property you could want. It’s exceedingly comfortable and breathable, feels cool to the touch, and has a soft, silky texture. Unlike cotton, rayon wicks sweat away from the skin, leaving you feeling drier on hot days. Since it’s often used as a silk alternative, it also drapes beautifully (perhaps better for casual weekend shirts, rather than conservative offices). Lastly, it’s naturally wrinkle resistant, which is good news because you can’t press a hot iron plate against rayon (you can scorch it if you don’t use a pressing cloth). But who wants to do chores during the summer, anyway? To get out wrinkles, just wear your garment. With quality rayon, the wrinkles should fall out within an hour. 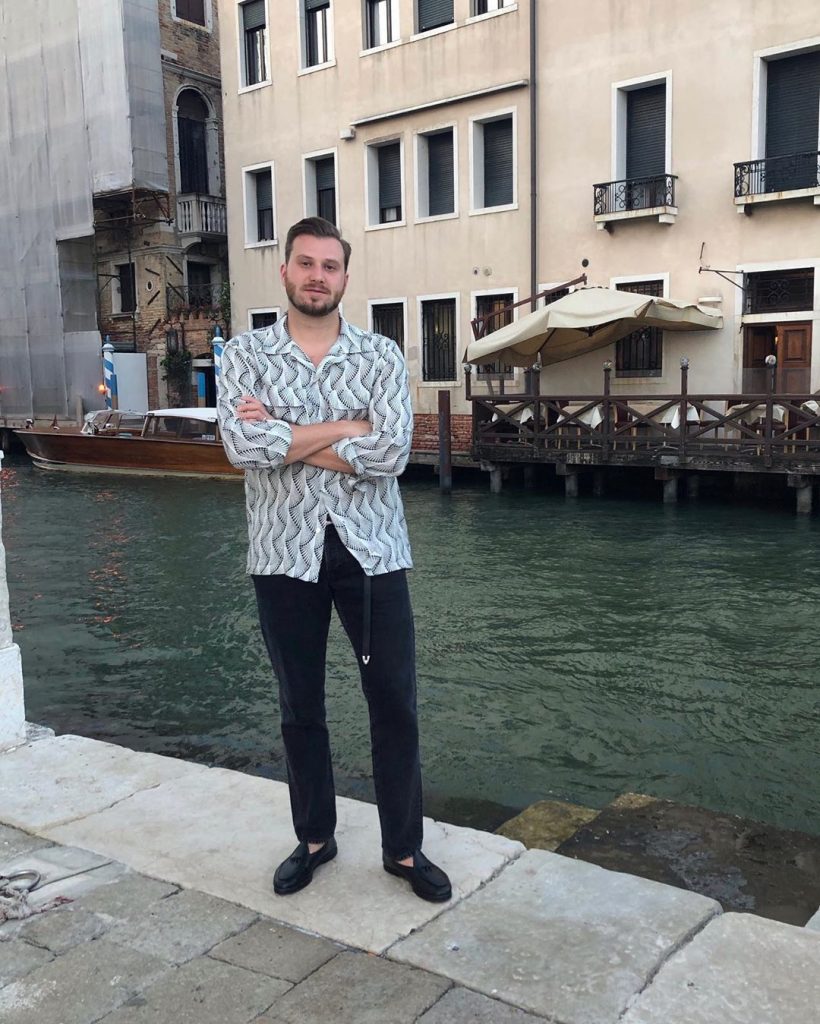 (pictured above: Lawrence Schlossman of Grailed and Failing Upwards)

Rayon has one downside: most garment manufacturers recommend you handwash and hang dry. Online, some people report having successfully washed rayon in their laundry machine by using the gentle cycle and a wash bag, but I haven’t tried it myself. The good news is that, since rayon doesn’t hold odors easily, you can get away with two or three wearings before needing to clean your garment. Plus, if you don’t want to handwash, you can always send your item off to a dry cleaner.

If you’re getting your first rayon garment, start with a shirt. The material is sometimes listed under other names, such as lyocell, viscose, or Tencel (Tencel is just a brand of rayon, much like how Kleenex is a brand of facial tissue). Our sponsor Proper Cloth offers the material in various prints and colors. They allow you to design a custom-made shirt however you want (I recommend going with their vacation-styled camp collar for this material). Ethan Newton of Bryceland’s can be seen at the very top of this post wearing a wonderfully cool, green coral print of his own design. Lawrence Schlossman of Grailed is shown wearing a Checks Downtown shirt on his honeymoon directly above. You can find Aloha-style shirts in this material from companies such as Soullive, Two Palms, Reyn Spooner, and Kato. Stevenson Overall Co and Star of Hollywood are a bit more rockabilly. Portuguese Flannel, House of St. Clair, and NN07 offer simpler, solid colors. For something a bit more modern looking, try Paul Smith, Frescobol Carioca, or Officine Generale.

It’s harder to find rayon pants, especially in a style that works with the kinds of clothes we write about here at Put This On. Some of my favorite summer trousers are a pair of wide-legged, self-belted pants from Lemaire, which are made from a silky, grey Tencel (the brand only has them in cotton this season). I wear them with a ribbed Camoshita knit and Marigela slip-ons, but the style takes some willingness to experiment. This season, Niche has “easy pants” that can be worn with loose tops and espadrilles. I can also see these Stone Island pants being worn with Nike sneakers and athletic sweatshirts. If you’re willing to try something new, hunt around for rayon trousers. Nothing I’ve worn, Fresco and linen included, has been as comfortable on hot days. It makes you think some of those mid-century promoters were onto something.