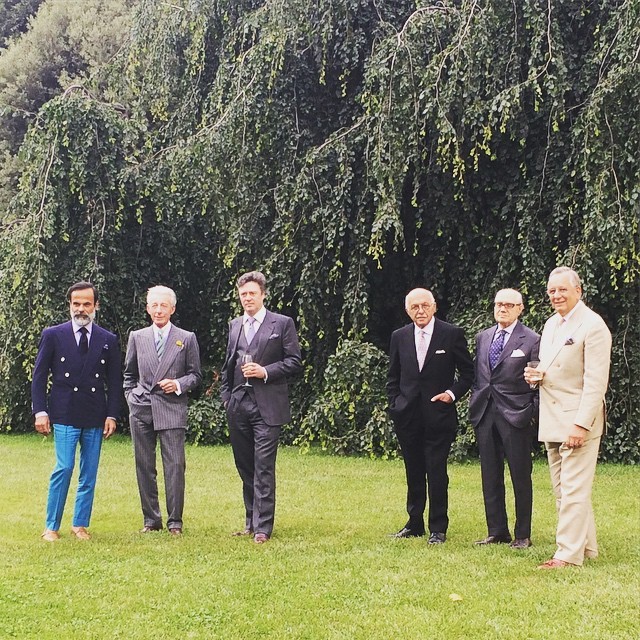 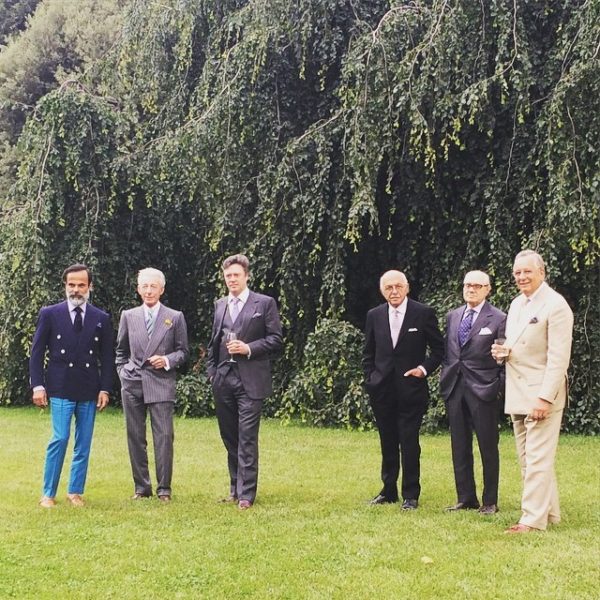 In the world of classic clothing, you can have a dozen navy suits and none of them will look the same. More than the fabric or stylistic details, tailored jackets are defined by their silhouette. Some lean, some full; some structured, some soft – a jacket can fit perfectly, but still be cut in a million different ways.

At last week’s Pitti Uomo tradeshow, Simon Crompton from Permanent Style hosted a symposium with six world-class tailors. Each tailor was tasked with the job of creating a special suit for the event, and although they each choose different kinds of jackets, the photos give us a chance to compare regional styles.

Cream double-breasted jacket: If Richard Anderson’s style is about business, and Antonio Panico is about relaxed elegance, then Edward Sexton is about glamour. The man who dressed Mick Jagger and The Beatles is famous for his bold and sophisticated takes on tailored clothing. This cream double-breasted jacket, for example, features strong, structured shoulders that slightly curve upwards (reminiscent of Pagoda shoulders), while the sleeveheads are decorated with a roped crown. The lapels are also wide and long, with a nice curved line going down the edge (known as a belly). And although it’s hard to tell from this photo, it looks like the jacket is cut a little longer than most (as would be typical for a Sexton cut). On the right frame, slightly elongated silhouettes can be slimming.

Navy double-breasted suit: Soft constructions aren’t just found in Naples. This navy 6×2 double-breasted suit by Anderson & Sheppard exemplifies the best in soft English tailoring. The lightly-padded shoulders are slightly sloped and rounded, and although the house specializes in what’s known as a London drape cut – where the fullness of the chest results in fabric “draping” along the edges of the armholes – this coat seems to be a little less full. Still, the chest is nicely swelled, the waist is gracefully nipped, and skirt is cut close to the body (skirt being the area just below the waist). On skinny guys like me, I find that such silhouettes give the illusion of a more athletic figure by accentuating the chest and making the waist look smaller by comparison. Also, check out how full the bellies are on those lapels. Beautifully old-school.

Midnight navy tuxedo: Liverano & Liverano is no stranger to readers of menswear blogs. The Florentine tailoring house is widely appreciated for their contoured and curvy styles. This dinner jacket has been made with a swelled chest; shoulders that are structured, but sloping; and quarters that cutaway towards the hips (the quarters are the area on a jacket just below the buttoning point). The effect is something that looks dynamic and distinctive, with a nice, sweeping line that rolls through the top of the lapels and ends at the hem.

Navy chalk-striped suit: Classic Neapolitan tailoring from Antonio Panico (one of the most memorable tailors I’ve had the pleasure of meeting). This is a perfect example of soft tailoring from Southern Italy, where the barely-padded shoulders give a much more rounded silhouette than the squared-off cuts on the Edward Sexton or Antonio Liverano jackets above, or the Cifonelli and Richard Anderson jackets below. The result is something that looks much more casual and relaxed, which many find to be easier to wear in today’s increasingly casual world. Also notice how the jacket’s lapels are cut very straight (i.e. with no belly at all), which lends a nice, razor-sharp look.

Blue double-breasted blazer: Easily one of the most creative tailoring houses in the world, Cifonelli in France is known for their dramatic style. See how the padded, squared-off shoulders end in very full and slightly-roped sleeveheads, while the lapels are big and wide, and made a little longer by lowering the buttoning point through a 6×1 double-breasted design. The skirt also looks like it kicks out a little. Compare it to the other skirts here, which fall straight down (on a wearer, they would hug the body, while the Cifonelli would angle outwards just a touch). Lastly, the jacket seems to be cut a little shorter than most. Together, these details give the jacket a lot more flair.

Charcoal pinstriped suit: Finally, a classic Richard Anderson jacket. The quarters are a bit more closed than the Liverano, the shoulders much more structured than Panico, and the chest cleaner than Anderson & Sheppard. On the right wearer, this suit can look a lot more business-appropriate and authoritative than some of the other models. Additionally, notice how the jacket takes on a more “Y-shaped” silhouette, than the “X-shape” of Liverano (thanks to the cut of the quarters). The front is also distinguished by its clean pocket lines and simple one-button closure, which together give this jacket a more streamlined look.

While the silhouettes above are specific to these tailoring houses, you can find elements here on any suit or sport coat. When trying on a jacket, pay attention to the shape of the shoulders, chest, and skirt; notice how the quarters are cut; and see if the lapels are styled in a way that’s right for you. One navy jacket isn’t necessarily the same as another navy jacket, but to see the difference, you have to know how to read silhouettes.

For more photos of the symposium, check out Permanent Style’s Instagram. Simon Crompton also wrote a couple of nice posts about the event on his blog, while David Isle covered it for StyleForum.