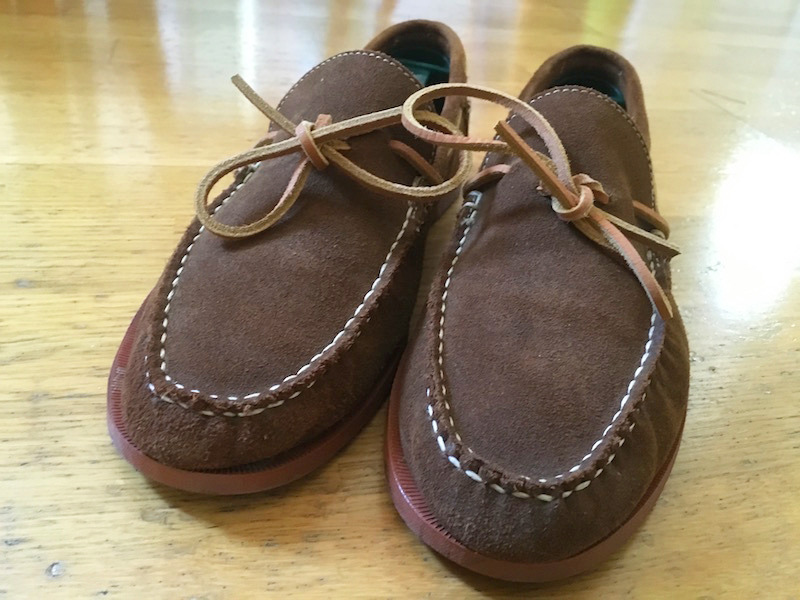 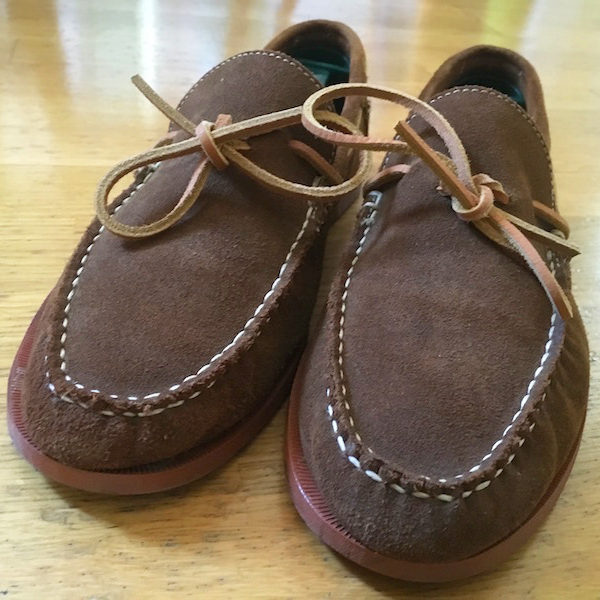 These are my favorite pair of shoes, a pair of “handsewn one-eye mocs” from Lands’ End. Let’s be clear: they’re cheap, in both senses of the word. I bought them, on sale, for less than $40 and I think it’s safe to assume they’re not made-in-Maine, nor available with a double bullhide sole, nor “outfitted with Horween’s Casco lining” (whatever that is). They do, however, fit well and more importantly, they’re my first pair of anything resembling moccasins. I like them, a lot, and this greatly increases the chances that somewhere down the road, I’ll upgrade to a better pair. For now though, I appreciate them as my knock-about mocs.

Most of us own some knock-about clothes (and I’m not talking about the t-shirt you wear to bed at night). Knock-about clothes aren’t utilitarian-sans-style. To me, they’re things you take pleasure in wearing but don’t spend any time protecting or up-keeping.

I had a navy sweater like that for a couple of years, which was often the first layer I’d grab when running out the door. It wasn’t my favorite sweater, nor the best made, but it fit well and I never had to fuss over it. As a result, it would end up in the back of my car for days or hastily crammed into a shoulder bag. It was there to be functional, but semi-stylish enough where I didn’t feel like I was swaddling myself in dad-fleece. I was a little sad to realize a few months back that moths had eaten a sizable hole in the front but hey, that’s what happens to a knock-about sweater.

Lemme back spin for a second: I’m in my mid-40s and I only started caring, in any real way, about what I wore four years ago when dropped nearly 30 pounds (and not coincidentally, started reading PTO in earnest). Trying to relearn how to dress “like a grownup” when you’re already in your fourth decade has been an unusual experience (and one that would require far more space to ruminate over). For now, it’s enough to say that I had to reboot my wardrobe because nothing fit me anymore and I’m fortunate to have enough of a disposable income for that purpose.

Of course, I went through the standard “dressed by the internet” missteps, especially in getting caught up in singular styles or trends, especially in year one, when my wife poked fun at how many gingham shirts I owned. Until recently, I also possessed more OCBDs than I reasonably needed – but more importantly, I started using terms like “OCBD.” I’ve obsessed over perfecting a trad Ivy look in tweed, even though I live in a climate where the average temperature in autumn is in the high 70s. Shit like that.

Regrets are unavoidable, but this is how the process works, right? It takes trial-and-error to shape something as personal as a wardrobe and this is precisely why knock-about clothes can be useful. They allow you to test out new styles while also hedging against the brutal depreciation that clothing purchases suffer from. By no means would I advocate “always buy low.” Well-made, durable gear is well worth the premium cost. But for practical reasons, it also makes sense to ease into something new vs. blindly balling out to acquire an insta-wardrobe.

This is particularly true when you’re still feeling out the deceptively simple question of “what do I like to wear?” As I’ve learned – the hard way – what I imagine I’d like vs. what I actually resonate with aren’t always the same. And vice versa: some of my favorite clothes now are ones that I initially was lukewarm about. The point here is: time is a central component to understanding personal style and knock-about clothes are a way to buy time at a bargain price.

I’m not saying the knock-about principle applies across the board. Most cheap ties, for example, don’t look like they’re worth the polyester they’re sewn from. Same goes for budget (non-suede) leather. But before I run out to drop serious coin on a Filson duffle, I’m totally happy to start with Beckel. At some point, I may give into my impractical desire to own an Inverallan shawl cardigan (for the five days a year in L.A. where it’d actually make sense to wear it), but I knew I liked the look because I bought a MUJI version first. Knock-abouts taught me that I like shirts in seersucker, but maybe not Viyella. My first pair of shell cordovan shoes was a pair of Florsheims, which have since acquired a small tear since I let the leather dry out (oops). I’ll probably wear those until the soles fall apart, but in the meantime, I’ve also been saving-up to splurge on a pair of shell boots (I blame Derek).

As for my current pair of mocs (literally sitting on my feet as I write)? Up until a year ago, I thought wearing shoes without socks was novel, so the fact that I’ve been wearing these shoes practically every day was wholly unexpected. I suspect, somewhere down the road, I’ll eventually upgrade to a pair of moccasins with better build-quality, but I’m in no hurry. After all, I still have these to knock-about. – OLIVER

Oliver Wang is an associate professor of sociology at CSU-Long Beach. He writes the audioblog Soul-Sides.com and is one of the co-hosts of the pop culture podcast, Pop Rocket.