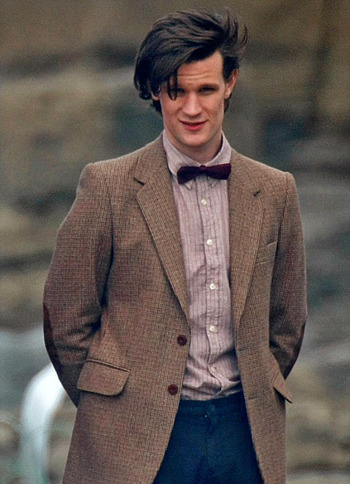 The Chap is reporting that Doctor Who will be wearing… wait for it… Chinese tweed. Apparently the costumers have sourced star Matt Smith’s jackets from a Canadian company which in turn sources its tweed not from the iconic Harris Tweed, but from mills in East Asia. Not only that, but the fabric is an acrylic blend.

The new Doctor’s wardrobe (including bowtie & braces) was a key part of the conception of the new series of the iconic Doctor Who series. I spoke with the Doctor (Matt Smith) and the writer of the new show (Steven Moffat) last year for my radio show, and was sure to touch on it. Last year, weavers on Harris & Lewis were overwhelmed by demand from fans of the show. This year, will those fans be phoning Beijing?

Filed Under: Doctor Who, England, Harris Tweed, Television, The Chap