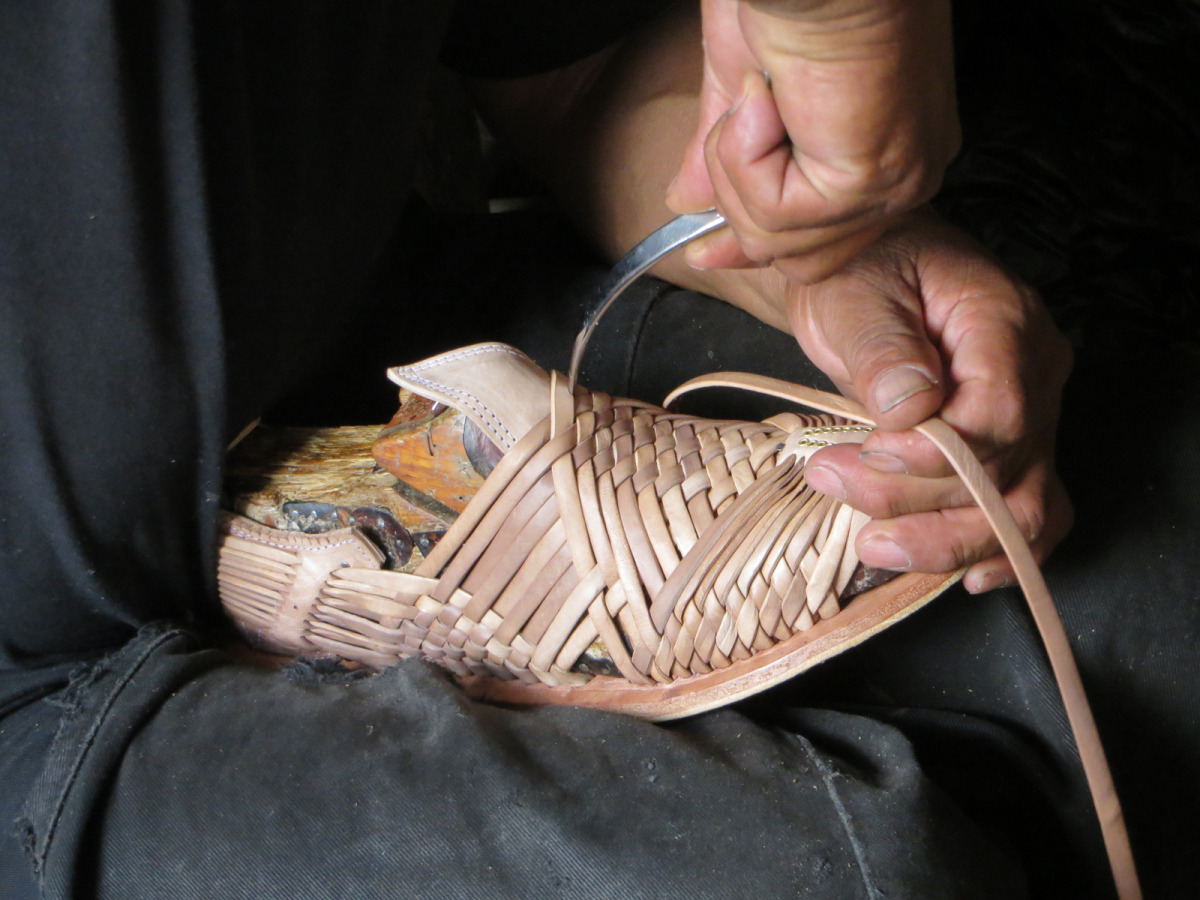 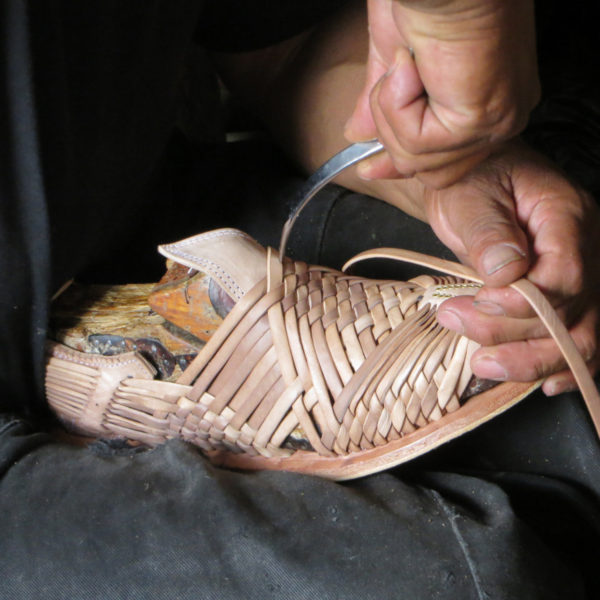 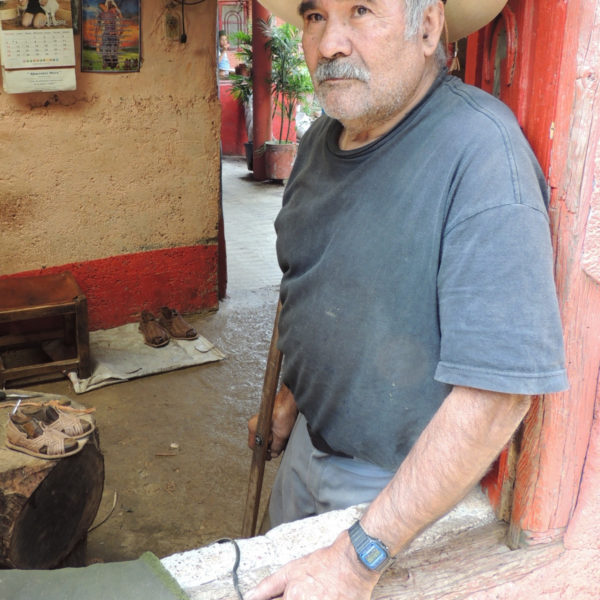 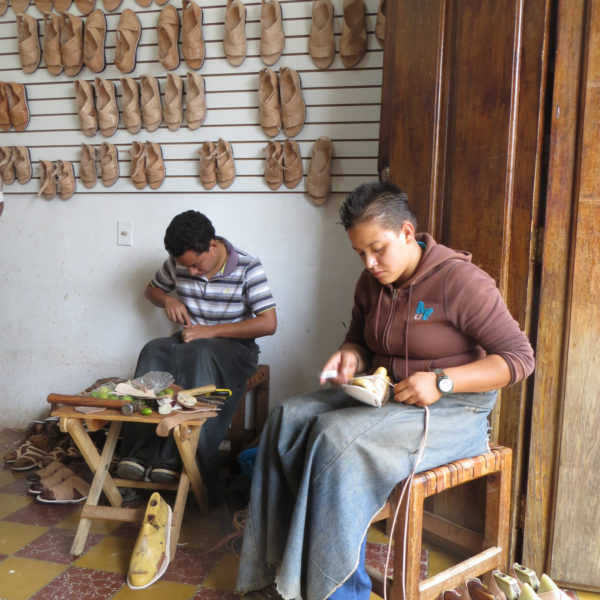 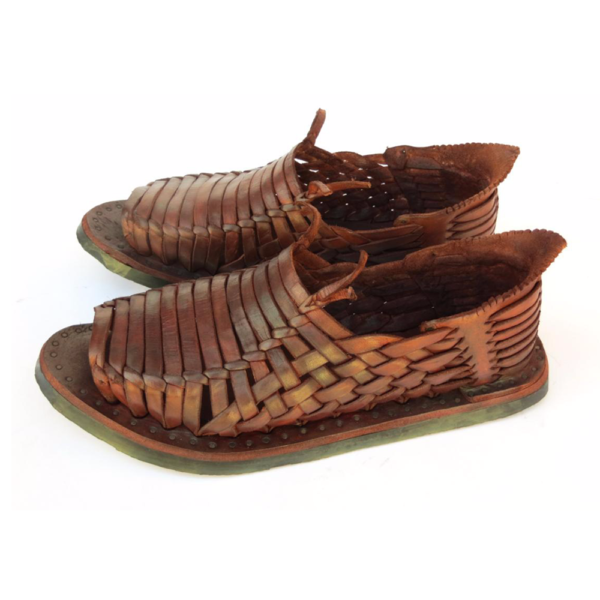 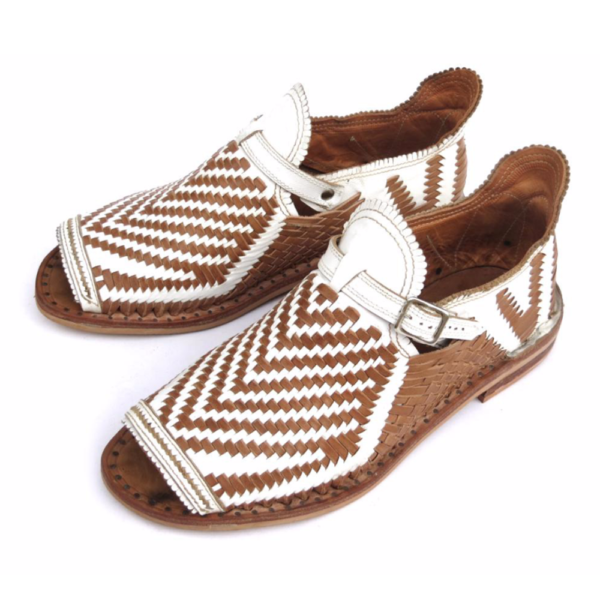 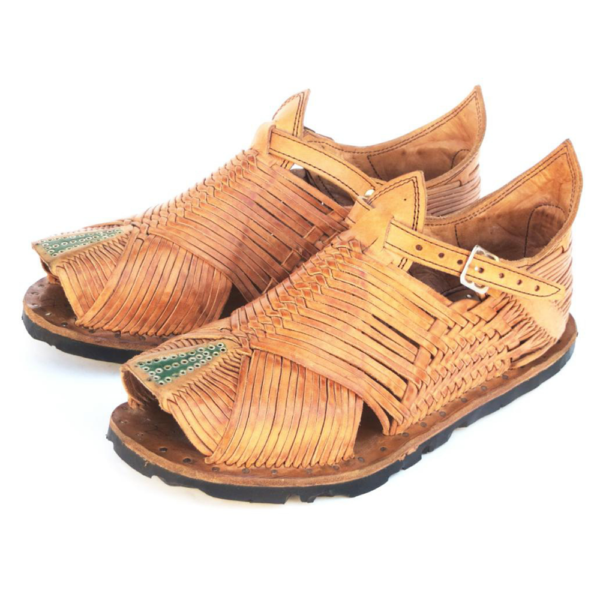 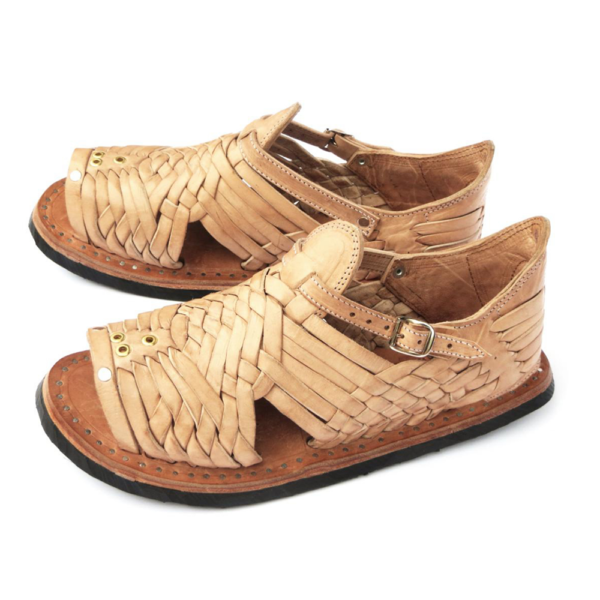 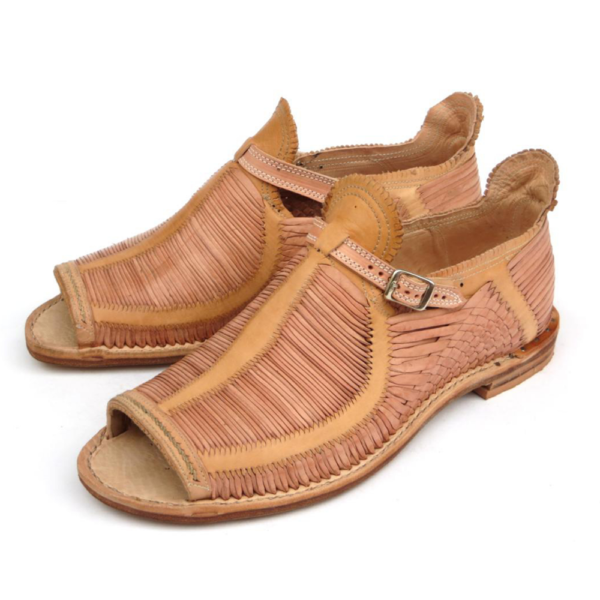 Ever since Jesse wrote about huaraches three years ago, I’ve been wanting a pair for summer. The Mexican woven sandal first became popular in the US during the 1960s, when they were part of the uniform of hippies and surfers in California. The Beach Boys even sung about them in their 1964 hit “Surfin’ USA.”

The reasons for their appeal are obvious: cheap, breathable, and more versatile than flip-flops, they go well with the kind of clothes you want to wear when it’s scorching hot (e.g. stuff from Dana Lee, trim shorts, and yes – vacation shirts). Unfortunately, finding an authentic pair outside of Mexico can be tough. Companies such as Cole Haan and Hudson sometimes offer their interpretations, but they never look as good as the originals.

One of the best online resources to learn about real, authentic huaraches is Markus Kittner’s blog. He’s an industrial footwear designer who moved to Mexico about six years ago. Since then, he’s fallen in love with the leather sandal and has worked to promote its craft through his site (he even maintains a working directory of various artisans who make the shoes). I recently chatted with him about the history and craft of huaraches, as well as his new line Úkata+, where he’ll be offering authentic huaraches made from vegetable-tanned leathers.

Tell us about the cultural significance of huaraches. I’ve read they have pre-Columbian origins. Are they mostly produced in Mexico and who mainly wears them?

Huaraches evolved from traditional thong-like footwear in pre-Hispanic Mexico. Since then, they’ve become complex woven Mexican sandals that are mostly worn in agricultural communities. Traditionally speaking, indigenous Mexicans wear the simplest styles, whereas farmhands wear more complex but still rugged designs with nailed-down, recycled-tire soles. On the other hand, wealthy farmers wear more elaborate and finely made huaraches with leather soles, but mostly on weekends or for special occasions.

Mexicans who live in the cities will sometimes wear huaraches, but they’re usually factory-made and produced from less-expensive leathers, stitched foam, or PVC/EVA soles. Those are usually relegated for use in the home or at the beach.

Artisans who make traditional huaraches by hand essentially have to compete with mass-produced factory footwear and cheaper imports, which makes profits so low that few can earn a living. And even in remote villages, injection-molded sandals and work boots are slowly replacing huaraches. Although my blog may make it seem like these are everywhere in Mexico, that’s really not the case anymore. Today, maybe only 10% of Mexicans still wear huaraches.

How are huaraches made?

In some ways, making a huarache is like making a sombrero or petate mat, and the tools aren’t too dissimilar from those used to make riding equipment. Every upper consists of a single woven strip of vegetable-tanned leather that’s woven uninterruptedly into the insole, going in and out of each hole until the leather gradually covers the surface of the last. Each weave has a very specific sequence for its design – it’s like having a password that’s so specific, it can’t be improvised.

The soles are sometimes produced from recycled tires, but traditionally, they were made from a combination of leather and hobnails (as they were worn in the countryside on dirt roads). Interestingly, hobnail patterns have occasionally been customized for the wearer, sometimes including his initials so his footprints can be recognized. However, hobnails became problematic on modern tarmac and concrete, not just because of the clacking noise, but also because they don’t provide enough grip.

In any case, the modern use of tire soles have mostly given way to injection-molded ones – partly because modern tires are impregnated with steel cords, which makes them difficult to cut. The disappearance of softer tires and vegetable tanned leathers has made it difficult for many artisans to continue their craft in more traditional ways.

It seems that some huaraches are really intricately woven, while others are a bit more “rustic” and simple. What accounts for the difference? Is it mostly about regional style or something else?

It’s partly about regional style, although regional styles also closely follow economic wealth and the availability of modern shoe making tools. Today, I would say the most intricate huaraches are made in the state of Jalisco, which happens to be the home of tequila. There are a lot of interesting, historical parallels between the production of traditional Mexican agave drinks and huaraches.  For example, both were suppressed by the Spanish, who preferred Castilian spirits and European-styled shoes.

In their early history, huaraches were mostly made in areas where Spanish colonizers exerted less control, which tended to be away from cities and in places with large indigenous populations. Over time, affluent and urban Mexicans began associating this footwear with farm workers and peasants, which has created a stigma against the style.

All that has affected demand – the fight against foreign imports and the idea that these are a “poor man’s shoe.” As a result, sales and profit margins have plummeted, which makes designs less ornate that they otherwise could be. There are still a few artisans who make precious huaraches, but since most huarache shops are located in or near traditional markets, they don’t sell well because they’re too expensive for customers with modest means.

Sadly, I think most people are only aware of the inexpensive huaraches that you see hanging out of market stalls. It’s true that commercial huaraches are often simply made, but that’s only because many consumers won’t pay higher prices for a more sophisticated design.

Every once in a while, you see huarache or huarache-styled shoes break into the North American market. Are these usually from small workshops in Mexico or are they from somewhere else?

A lot of it comes from China, partly because they have the capacity for mass-production. There’s one town in Mexico that can produce semi-industrially made huaraches. Interestingly, the US Army placed a large order for huaraches in the 1950s, which turned a lot of sombrero factories in that area into shoe-making plants.

In any case, China still does much bigger numbers. A Mexican factory can maybe do a hundred thousand shoes per year, but only for the simplest of styles. A Chinese factory, on the other hand, can make the same numbers in a few months. So as a matter of pure numbers, you just see more Chinese shoes in terms of exports.

When a US brand asks a Chinese factory to copy a huarache-styled shoe, however, the shoes often don’t come out the same as they would from Mexico. There’s little appreciation for how vegetable leather can hold a woven shape better, how wetting and hammering leather helps shape the huarache to the last, or how certain weaves can minimize the leather’s stretching over time.

Of course, Nike also uses the term huarache for their sneakers, which makes it difficult to promote these more traditionally-made shoes from Mexico.  At the same time, I guess it’s also a tribute to an inspiring product and has helped to familiarize people with the name.

There’s a part of me that doesn’t like how a Mexican craft is now being taken abroad, then sold to the US market – with no benefit to the people who originally produced these shoes. On the other hand, when TOMS started making huaraches in Mexico, some Mexicans criticized them for profiting off a national icon, even though they were creating jobs in the country and helping promote this style around the world.

For those who make higher-end huaraches, what defines quality? Is it about the material or the fineness and intricacy of the weaving? Are huaraches with finer weaves always considered better?

A finer weave will make for a softer and more exclusive shoe, but there are other factors as well – the quality of the leather, transitions in the weave pattern, shape of the holes in the soles, etc. Working with quality leather means you can get thinner strips for the uppers (say, four to six millimeters) since they won’t snap during the weaving process.

Traditional leather sandals can sometimes be very stiff. I know some people soak them in water at first and then wear them for a few hours, just to break in the leather. Is that the case with huaraches? What do you recommend for care?

Naturally, it’s going to be a little more uncomfortable when you break in shoes without socks. That’s compared to traditional leather footwear – not the softened up kind you see in more modern styles. That said, the process is easier if you choose shoes that fit properly and have been made well. If the last follows the line of your feet, they won’t fight against you as much.

You should never soak your huaraches to break them in, although some are made with wet leather (the leather on those will shrink once they’re dried and thus fit a bit tighter). I’ve heard some people recommend using WD40 to soften the leather, or paraffin based oils that would otherwise be used on equestrian leather products. Personally, I recommend just wearing the shoes with socks at home until they’re partially broken in (if you have to break them in at all).

Some people clean their huaraches by rubbing a lemon slice over a stained area. I prefer not to wash my huaraches too much, as that can affect the shape. Neutral shoe polish can help extend the life of the leather though, as it conditions the leather and helps keep it supple. In the case of light-colored huaraches, it can also prevent stains.

Tell us about your line, Úkata+. Where do you source your materials and how do you find your makers? Who designs the styles?

Úkata+ is essentially an extension of my blog. It’s a way for me to help promote and preserve this craft. “Úkata” means “crafts” in the indigenous Purepecha language of central Mexico. The plus sign stands for the additional benefits I’m trying to create, including for the environment and makers.

For example, the vegetable-tanned leathers and natural crepe rubbers are much friendlier for the environment. The production process can also be innovated and made more comfortable for the makers, and creating high-end huaraches means that more profits will go back to the huaracheros (the people who make these shoes) to sustain their growth and passion.

Naturally I also want to create the best huaraches, but I also want to elevate the perception of this craft by introducing better last shapes, materials, and finishes. It’s an interesting challenge because many of the traditional skills from the golden age of huarache-making have disappeared and need to be relearned.

I design all my own shoes, although for now they are mostly variants of traditional styles to keep things simple for the makers (especially when it comes to developing new weaves). I also design the new last shapes and make the initial samples. The work takes a lot of time, but it gives me a better understanding of how huaraches are created, which in turn helps me produce a better product.

Many thanks for your time, Markus!

For those interested, Markus will be putting his Úkata shoes into production next month. Find models such as the Oaxaca and Jalisco at his webstore sometime at the end of May/ beginning of June. To keep up with his work, you can also follow him on his blog, Tumblr, and Facebook accounts.