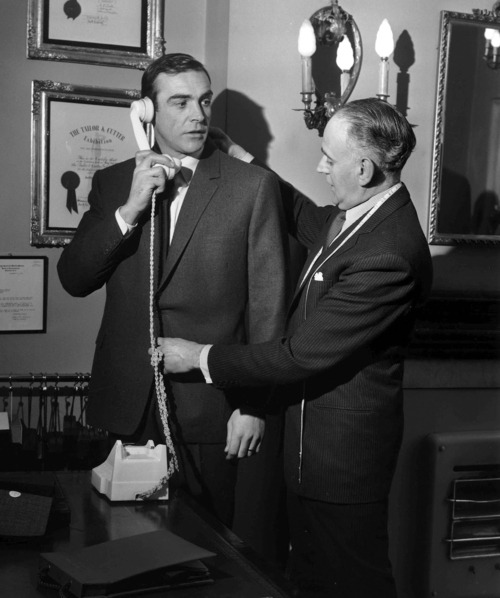 There’s a rule of thumb (literally) that’s often passed around for how to determine the proper length of a suit jacket or sport coat. As it goes: you want the hem of your jacket to hit around the thumb knuckle, the one between the end of your thumb and where the thumb’s joint meets the palm. Some also say that your hands should be able to just cup the hem of your jacket when you have it on, but this is essentially saying the same thing.

This rule, however, is somewhat mixing up the order of how traditional tailoring is done. In the past, when men went to bespoke tailors to have their suits made, tailors would eye where a jacket should hit, and then use a man’s thumbs or knuckles as a reference point for future commissions. Which makes sense. The proper length of a jacket is more about how it works in concert with the other parts of your body, thus making things look as well proportioned as possible. It’s not about just meeting wherever a man’s knuckle happens to fall. The “rule of thumb” works for most men, but what about those with longer or shorter arms? Should they have to sacrifice the proportion of their suits just so the hem hits the “correct” place?

Of course, nowadays, most men buy off-the-rack, so they have to rely on their own eye for whether a jacket is long enough. One principle – and this is the one that I think is best – is that the hem of your jacket should roughly break at the midsection between the floor and the back of your coat’s collar (i.e. the highest point on your jacket). There’s some wiggle room here though. A casual jacket can be a touch shorter, whereas a business suit may need to stay traditional.

To determine this, you’ll need a full-length mirror and about ten or twelve feet of distance to view yourself accurately. If you’re standing too close, you’ll distort your view and the proportions of your suit may look right when they’re actually not. So, if you can’t get a good look, we have a more generalized rule: a sport coat or suit jacket should at least cover your posterior.

That’s not a bad rule to follow, but remember: at the end of the day, where a suit jacket’s hem should end is about proportions and balance. Be careful of the trend towards shorter coats, as they can make you look as though you’re wearing your little brother’s jacket. And beware of overly long jackets, which can make your legs look unusually short. As always, what’s best is what flatters you the most.