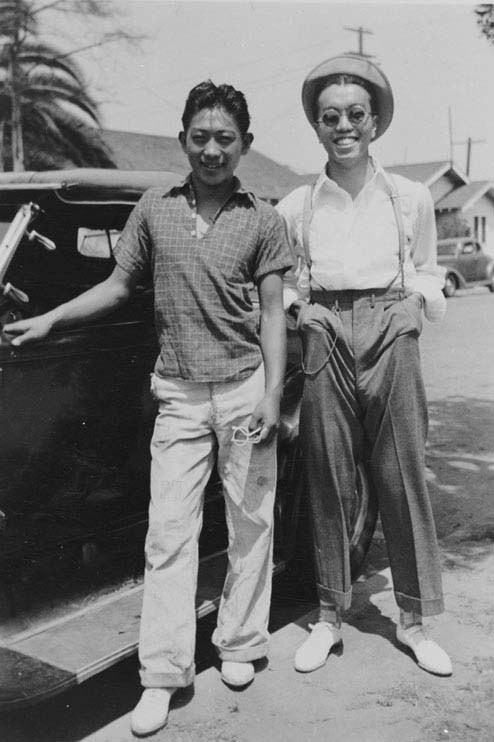 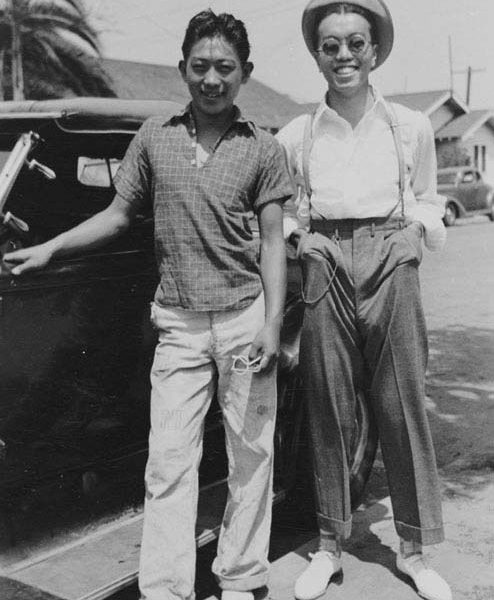 One of our readers tipped us to this great article on the forgotten history of Japanese American zoot suiters. An excerpt:

In popular memory zoot suiters are often associated with African Americans and Chicanos during World War II. But many Nikkei also participated in this cultural movement. While it is not possible to determine the exact numbers of Japanese American zoot suiters, the available historical evidence suggests that they were a visible presence.

So the internment experience itself was an incubator for Nikkei zoot suit culture. Japanese Americans even invented their own slang for Nisei zoot suiters. One was “pachuke,” a Japanese version of the Spanish word “pachuco”/“pachuca.” The other was “yogore,” a derivation of the Japanese verb yogoreru (to get dirty). Sociologist Shotero Frank Miyamoto, a contemporary observer of Japanese America, explained that “yogore” referred to individuals who were “shiftless, transient, constantly drinking and gambling, hanging around pool halls, always picking fights, visiting prostitutes or attempting to engage in illicit sex relations.”

Yogore posed a serious problem to the War Relocation Authority (WRA), the federal body charged with administrating internment. From the WRA’s point of view, zoot suiters endangered the very future of the entire Japanese American population. The federal government planned to scatter (or “resettle”) Japanese Americans around the country so that they might “assimilate” into the white middle class instead of returning to their West Coast farms and Little Tokyos. Pachuke troubled this vision for solving the “Japanese Problem” because they spurned polite standards of decorum. Their brashness loudly advertised their differences from the white middle-class. It also suggested an explicit kinship with working-class black and brown folk—the very opposite of the message that the WRA wanted to send to mainstream America.

Even worse, the zoot suit itself signaled an open defiance of the nation’s war effort. The War Production Board had banned the sale of zoot suits as a means to ration fabric. So wearing a zoot suit could be read as an unpatriotic act. The eruption of Los Angeles Zoot Suit Riots in June 1943—when thousands of white soldiers and civilians violently attacked Mexican Americans and other zoot suiters of color—drove home this point. Thus pachuke let loose from the camps might place Nikkei under further suspicion of disloyalty. No wonder, then, that the Manzanar camp’s Free Press newspaper editors beseeched its readers: “Leave your zoot suits behind. And above all, be an ambassador of goodwill for the sake of the Japanese in America.”

You can read the whole story here.