Nothing is sacred anymore. In the last few years, as guys have gained a more nuanced understanding of how to dress well, every rule held to be true ten years ago is now being challenged. It used to be that all pants should be slim-straight and flat-front — pleats, it was said, were for old people. In a recent Armoury blog post about how to build a basic trouser wardrobe, Mark Cho, the company’s co-founder, said that he likes pleated pants because they allow you to get more shape out of the silhouette. If the thigh is too slim, then you have to taper the trousers much more aggressively to achieve the same look. “It’s all about relative proportions,” he said.

Similarly, other things have come into question. Black dress shoes are no longer verboten (I often wear black tassel loafers these days). Wide-legged pants are getting another look. And we’ve talked about the virtues of slightly extended shoulders, which require a bit more structure than those uber-soft jackets favored in the Italian-menswear days of 2010.

Still, few things get style-conscious men more upset than the sight of someone wearing white socks. White socks are for sports, so goes the rule. Nearly every color is acceptable — even cheeky “fun socks.” But white socks show that you shop for clothes at Costco and have no sense of occasion. They’re the style property of goofy dads, granddads, and wood-working teachers. Even if you were to wear these to the gym, a more sophisticated choice would still be grey.

But white socks do have some tradition in menswear, and not just with poorly dressed men in the ‘90s. Flip through the pages of the 1965 book Take Ivy, and you’ll see white socks worn with loafers as a central feature of the post-war collegiate style. In the 1960s, British Mods and Americana appropriators picked up the combo as a shorthand signifier for counter-culture style. Our illustrator Richard Carroll, a documented white-sock aficionado, says he started wearing the accessory as a younger man because he was trying to copy his cultural heroes from Britain. “I came into this by copying Mods, who in turn were copying the Americans,” he says.

“Being from London and growing up in the 1970s and ‘80s, white socks simply meant Soul Boy to me,” says Tony Sylvester, another white sock endorser. “Skinny fit, mohair suits in grey or burgundy, worn with leather ties, polo shirts, black or grey loafers, gold chains, and a stingy brim pork pie hat. And those always white toweling socks. Think Mickey Pearce from Only Fools & Horses.”

“For me, it’s all about Dean Martin’s white socks with slacks, a cardigan, and a pair of Albert slippers,” Tony continues. “He looked like he wandered straight on stage from the golf course, pausing only to replace his cleats with indoor shoes.”

White socks also have a strong sporting connection, which is why they’ve always had a place in the gym. “The look of tennis players from the 1920s and ‘30s is a huge inspiration for me since they were wearing clothes that we look upon today as dressy — collared shirt, chinos, white socks, and so forth,” explains Oliver Dannefalk, co-founder of the Swedish knitwear and accessories line Rubato. “Back then, that was sportswear. I like it when people wear clothes instead of putting them on a pedestal.” 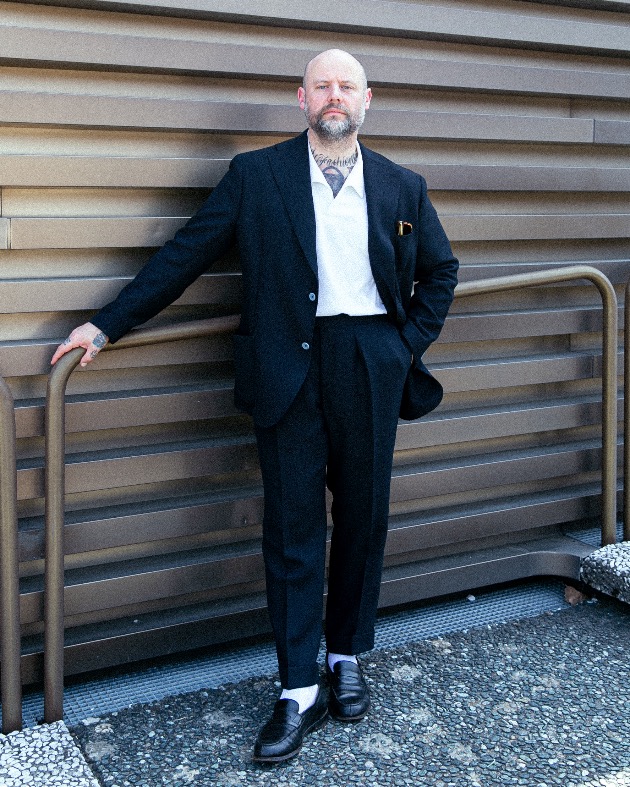 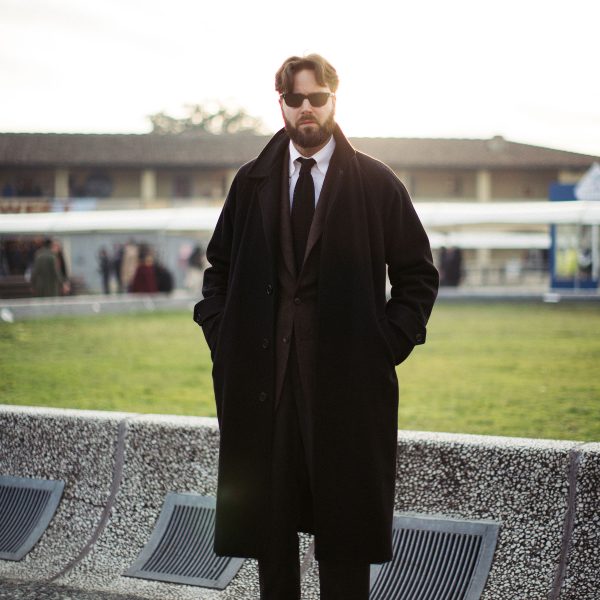 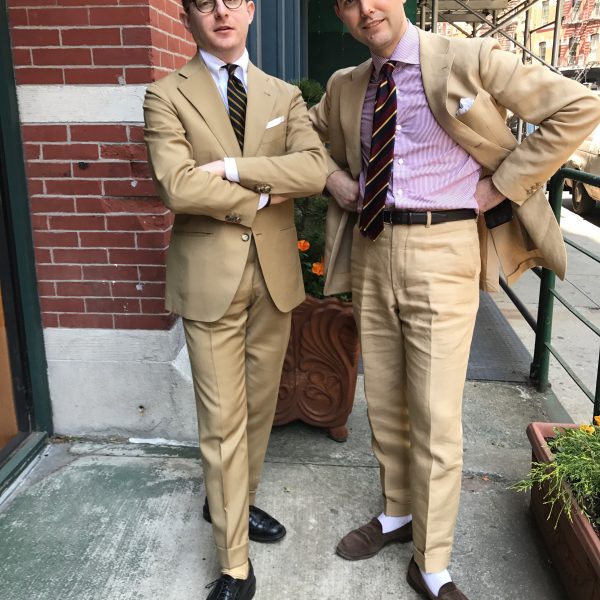 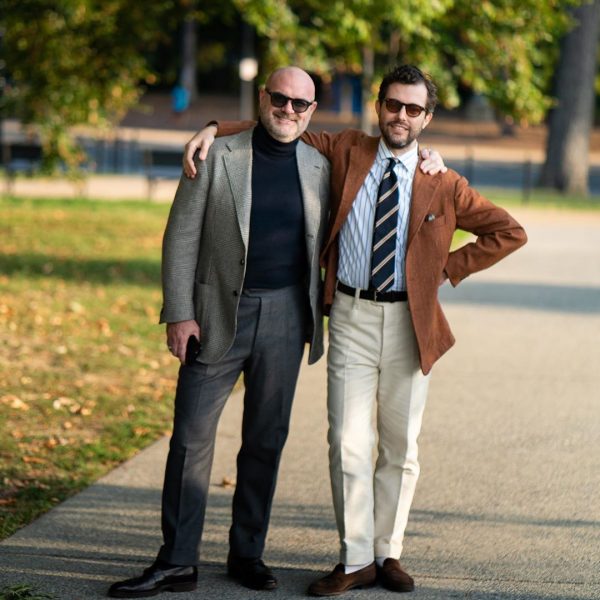 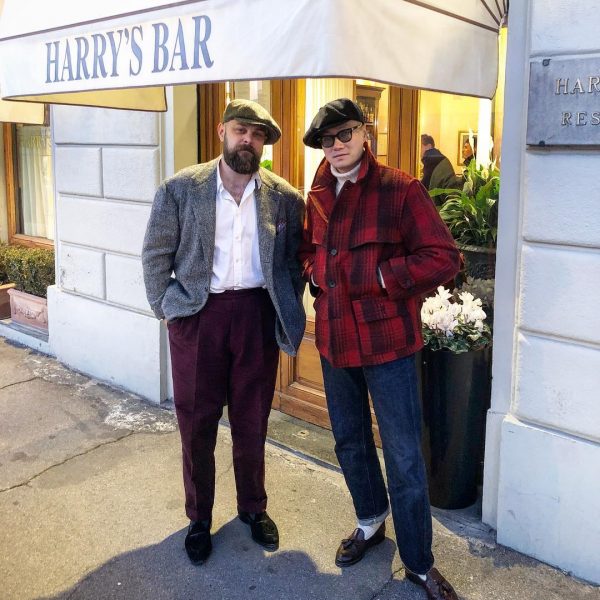 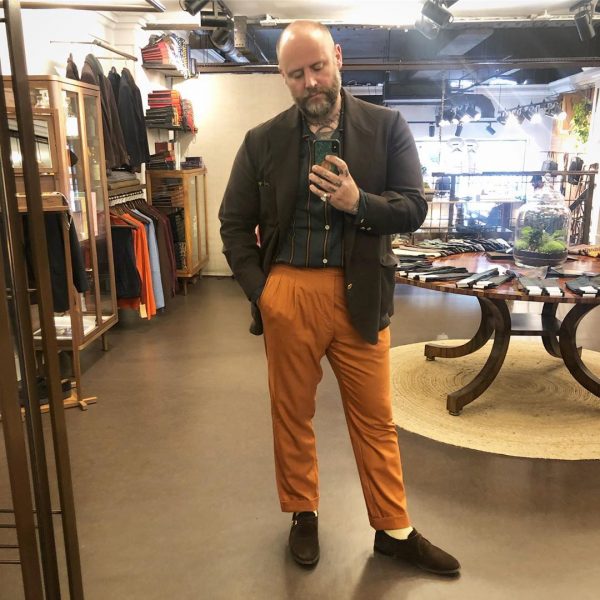 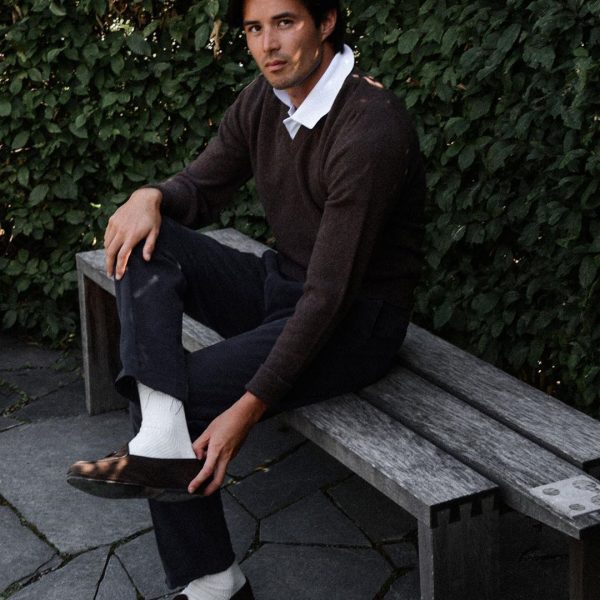 When talking with various well-dressed men about why they wear such maligned socks, the idea of bending the rules came up as a common theme. Tony said he enjoys playing “brinkmanship with the outfield of good taste.” Richard echoed the same when he said he likes to find a way to make things work. “When people get too strict about the rules, it makes me want to try things out,” he laughed.

But white socks can be more than ribbing (get it?). Given their sportswear heritage, they’re a little more casual than their navy and charcoal counterparts. Oliver says he likes them because they feel a little more relaxed with tailored trousers. “There’s also a bit of romance to them. The whole idea of wearing white socks with a bit ‘devil may care,’ which I appreciate.”

While searching for examples of how men have worn them well, I was surprised by how easily the accessory slides into almost any wardrobe. They go naturally with denim and casual shoes. Depending on the tailored outfit, they also sometimes look more at home with lighter colored trousers, such as those in cream, than socks of any other color. Loafers are a common pairing, tasseled or penny.

“I’ve always had white socks in the drawer for chinos and pennies, so I simply took to wearing them with similar, but smarter trousers in the summer — gaberdines, olive Frescos, etcetera,” says Tony. “I also team them with grey and chocolate brown flannels and buff twills for the colder months. The bright white ones I save for chinos or monochrome outfits with black shoes. Brown shoes and warmer color trousers get off-white, very light tan, and very pale yellow socks for harmony.”

Brian Davis, the co-founder of the second-hand boutique Wooden Sleepers, also thinks of them as slightly seasonal. “My favorite way to wear them is with Sperry CVO sneakers and vintage military khakis,” he tells me. “I think of them as a classic Northeastern nautical look inspired by the old photos of JFK sailing off Hyannis Port.” Brain says he mostly wears his bright white socks in the spring/ summer months; then it’s back to darker colors with boots and denim come fall. 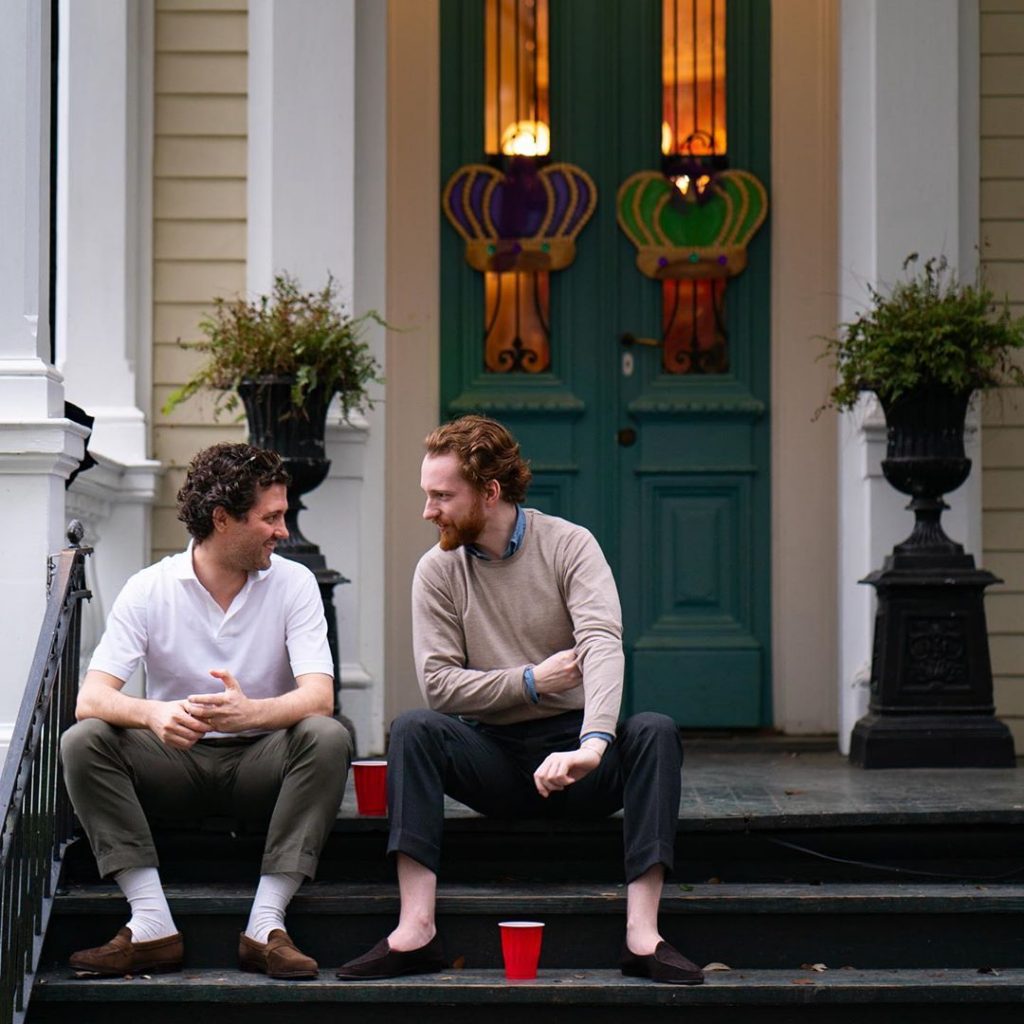 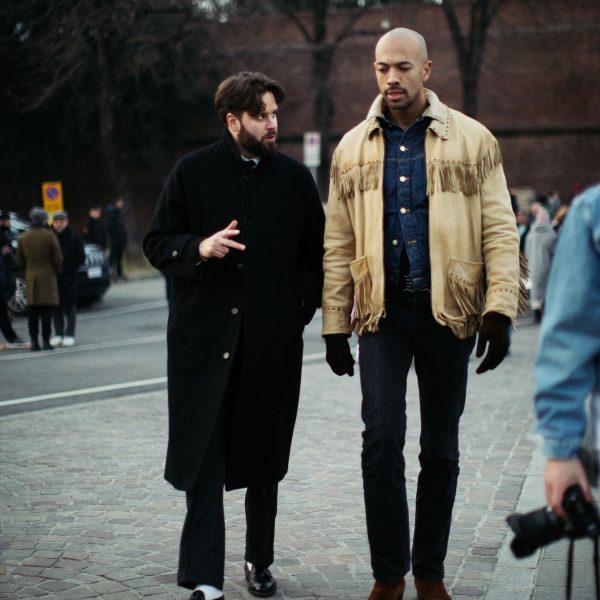 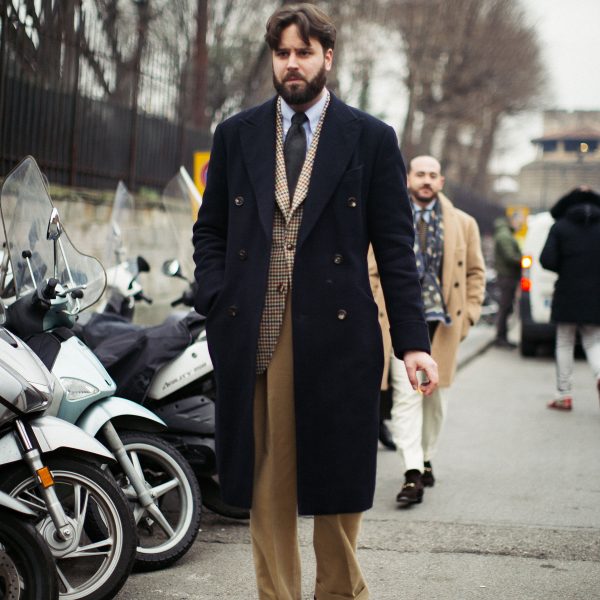 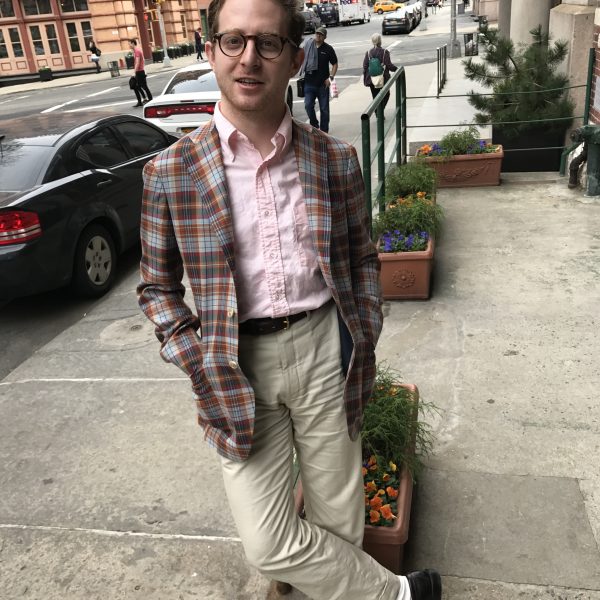 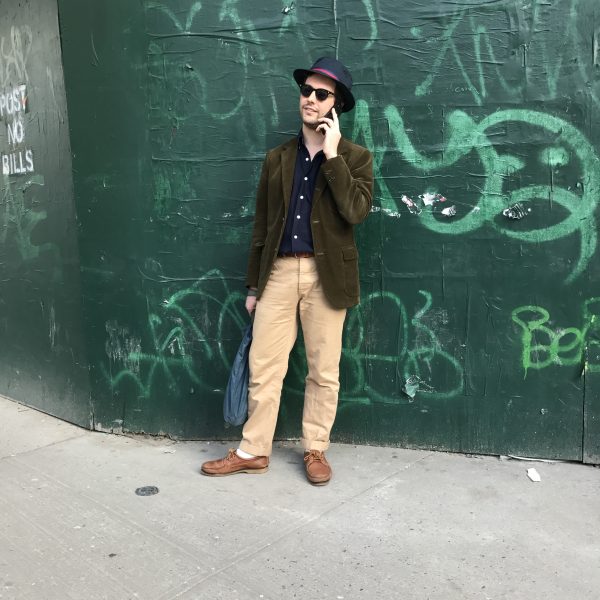 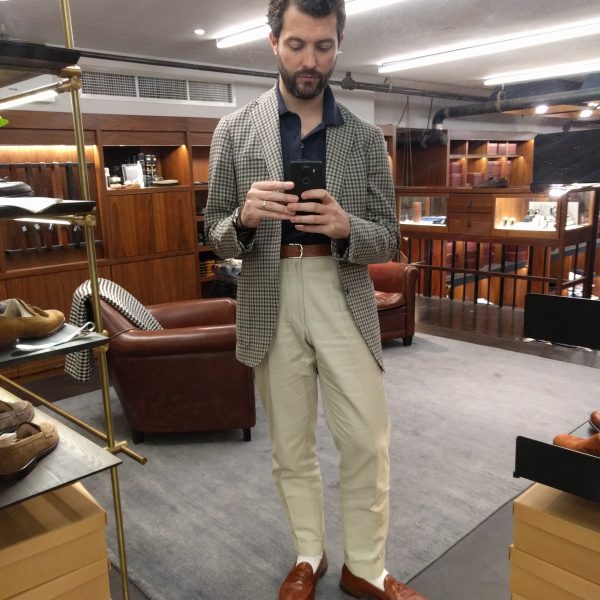 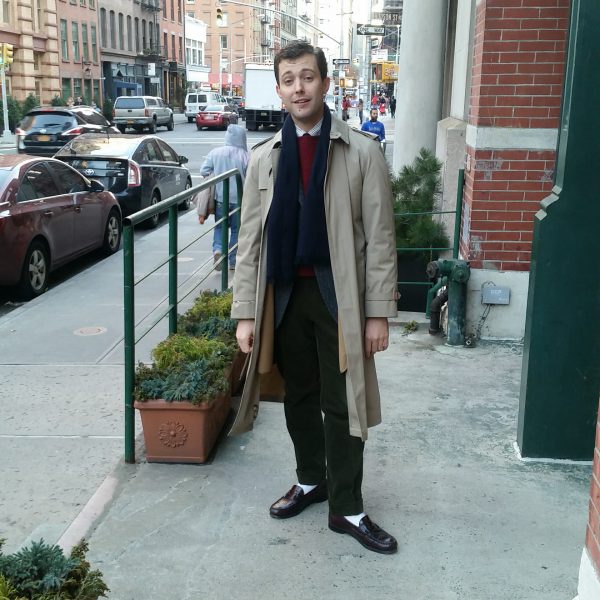 If you’re looking for options and don’t want to splurge, Hanes is always a good stand-by for affordable basics (I wear their cheapy grey tube socks with a lot of casualwear). For an upgrade, there’s American Trench. I bought a couple of their socks a few years ago and have been supremely impressed with how they’ve held up. They have a bunch of options in white, including a striped design inspired by something JFK once wore, but they’re all a little cushy. You’ll want to keep these to more casual shoes, such as boots and sneakers.

For thinner dress socks you can wear with leather loafers, our sponsor Dapper Classics has them in solid white and a subtler cream. They’re made in at a family-owned, North Carolina factory and feature hand-linked toes (which means you don’t get the bump at the end). Their socks are just as well-made as any of the top-end manufacturers I’ve tried, but they’re a little more affordable (their breathable, mercerized cotton socks are still among some of my favorite warm-weather accessories). Pantherella, Sozzi, Marcoliani, Bresciani, and Jacquemus Man are other reliable options. For something budget-friendly, it would be hard to beat Uniqlo.

As for why white socks inspire such passion, Oliver supposes it’s just one of those rules you first learn when you make an effort to dress better. “The world of menswear is so hung up on rules — don’t wear this, don’t wear that. When guys get into this stuff, sometimes they forget to be themselves. They forget to have fun and wear what they like.” Brian adds that any ‘rule” will have its exceptions. “Like anything, it’s all about execution and having a point of view,” he says. “Be intentional and unapologetic.”

(Many thanks to Richard Carroll, Tony Sylvester, Oliver Dannefalk, and Brian Davis for speaking with me for this post!)