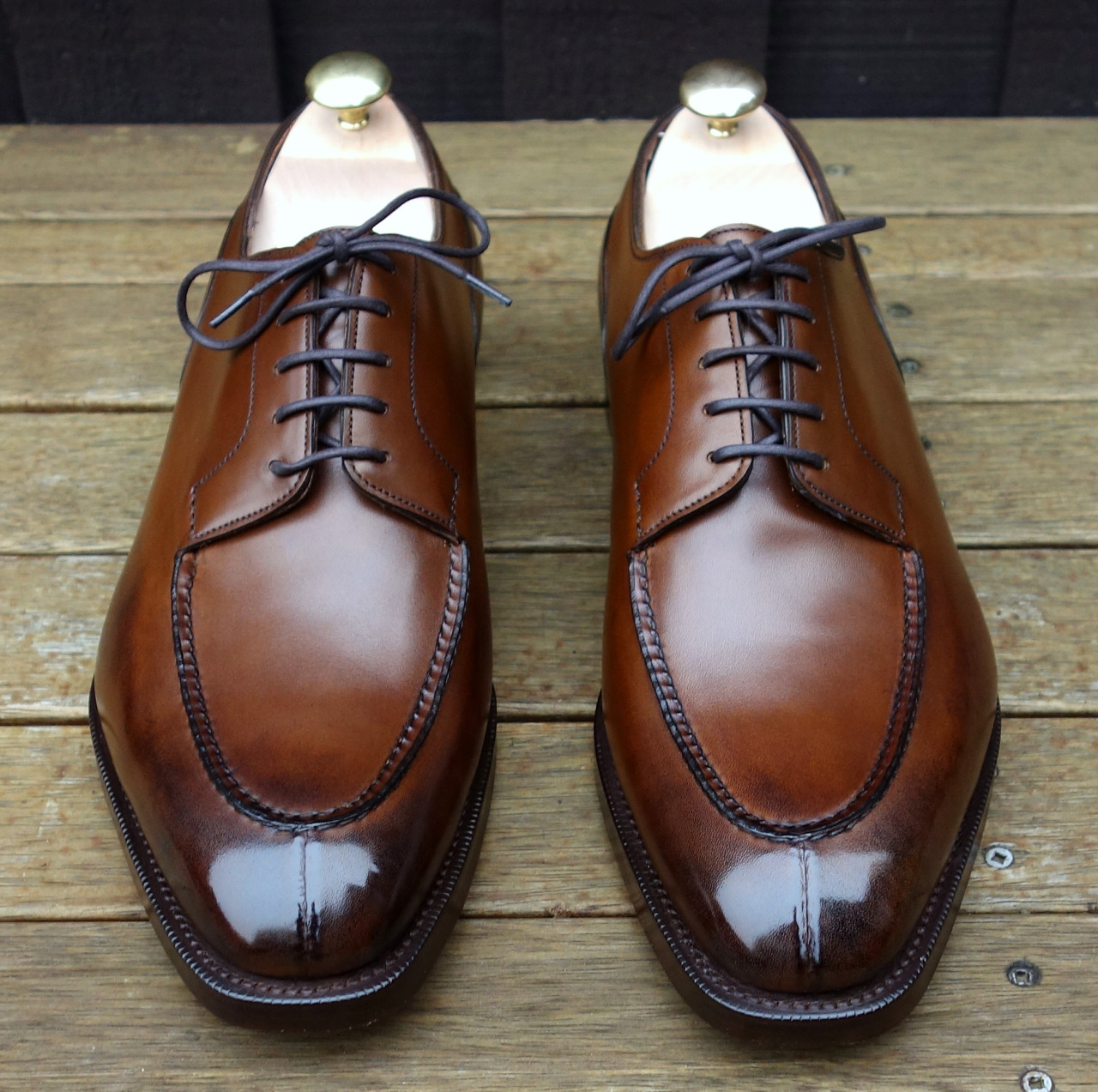 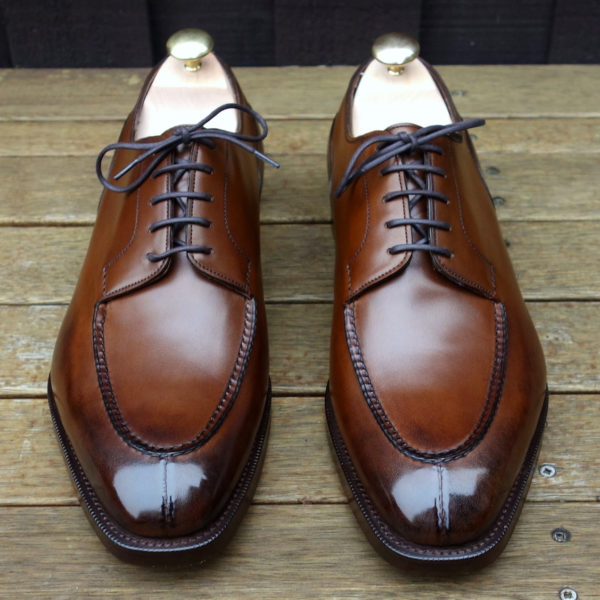 If I had to stick to one style of footwear for the rest of my life, it might have to be the split toe. Defined by that vertical toe seam and crescent apron, the style is sometimes referred to as an Algonquin in the US and a Norwegian in Europe. The terms here can be confusing since “Norwegian” can also refer to a method of attaching a shoe’s uppers to its sole, but not all Norwegian shoes are made with Norwegian constructions. (I suppose this means a “split-toe trifecta” might be a Norwegian made by a Norwegian using a Norwegian construction, but I don’t know any Norwegian shoemakers).

In any case, the nice thing about split toes is that they’re less formal than oxfords and less ubiquitous than wingtips. I find they go with everything – business and casual suits, sport coats and trousers, and (sometimes) even certain styles of casualwear. Everything is in the details, really. Like with any style, the sleeker the shape, the more refined or “city” they become; the chunkier the style, the more causal or rustic they look. For the most part, I find most good split toes can be worn without much thought, making them an easy go-to when you’re running out the door. See our friends Bruce Boyer, Ethan Newton, and MostExerent for style inspiration.

Unfortunately, split toes tend to be expensive. Although there are plenty of beautiful examples with machine-stitched aprons, most are good split toes are handsewn around the toe (which adds time and money). If you’re looking for a pair, here are some options.

As usual, your best bet is eBay and thrift stores, where you can find gently-used models from well-regarded makers. I find Brooks Brothers and Ralph Lauren to be particularly good for value, as they’ll often just rebrand high-end shoes with little to no change in quality. Just look for the ones that have been made in the US or UK.

There’s also Meermin, who used to produce a model with a “pie crust” apron – a detail that some people pay upwards of $1,500 for (theirs is executed surprisingly well). It doesn’t seem to be in production at the moment, but with enough emails, maybe they’ll bring it back.

This is where your options really open up. See Alden and Carmina if you want something with chunkier stitching. That kind of detailing can make a split-toe more casual, although Carmina is still sleek enough to feel relatively dressy.

There’s also Brooks Brothers, Vass, and Crockett & Jones. The last has them in two models – the Durham and Cornhill. I find the latter more handsome, but the first is easier to wear with either jeans or wool trousers.

Skoaktiebolaget is also holding a group-made-to-order run this week with Enzo Bonafe, a small Italian producer of handwelted shoes. (Note: Enzo Bonafe’s prices are going up next month, but these are being offered at pre-hike prices). That mid-brown calf looks gorgeous.

For the serious splurge, see Gaziano & Girling, JM Weston, and Saint Crispin’s. Or my favorite model of all time: Edward Green’s Dover in dark oak. Excruciatingly expensive, but also exceedingly handsome. You can see an example of the Dovers in the image above.

Interestingly, the vertical toe seam you see on split toes was once used on wholecut derbies in order to create a more water-resistant shoe (specifically those worn by canal and railway workers in Britain, who didn’t want water seeping into their footwear). Bespoke shoemaker Nicholas Templeman recently posted a story about it on StyleForum. Of course, today, they’re more of a decorative detail than anything, although John Lobb in London still sells bespoke shoes inspired by those original workwear designs.