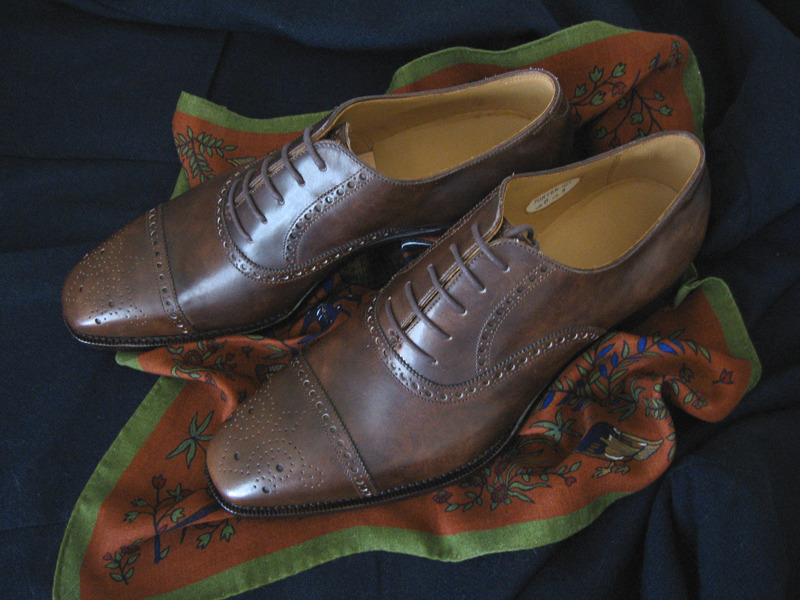 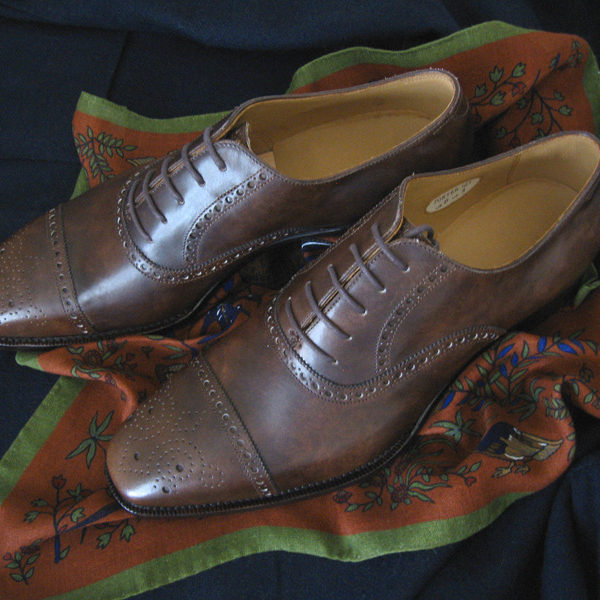 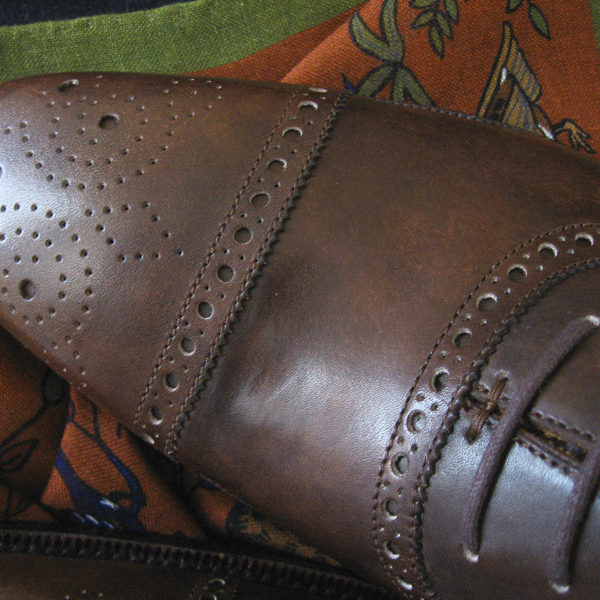 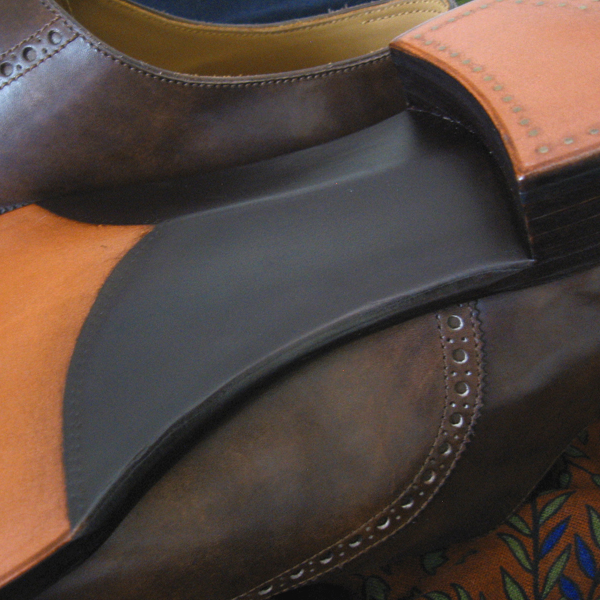 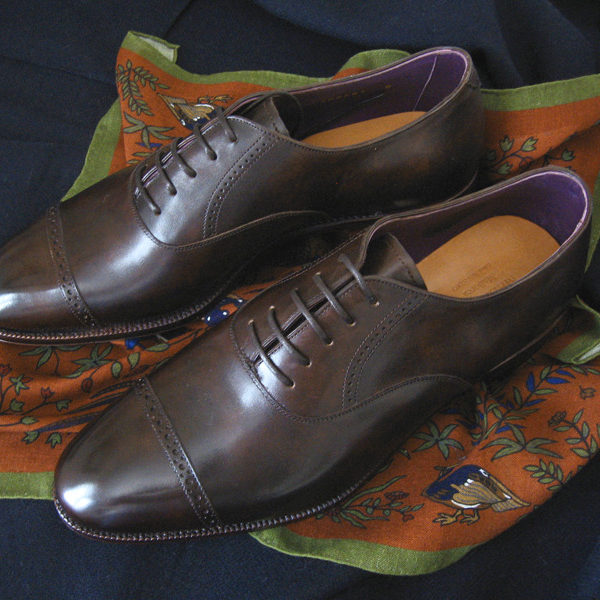 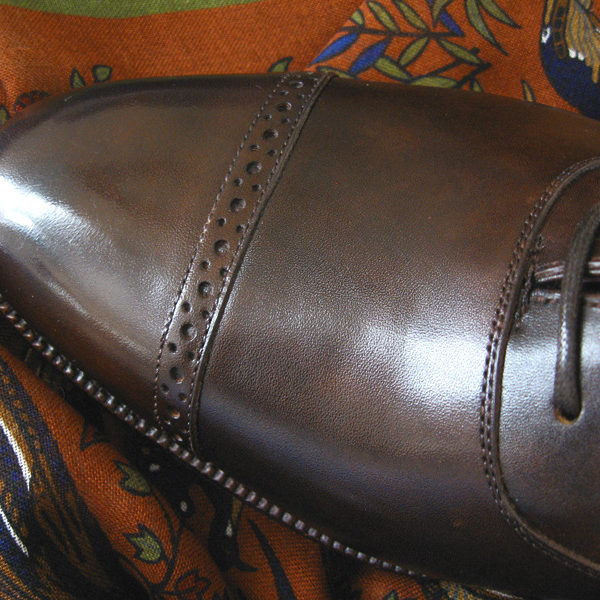 Close up of Meermin’s quarter-brogues 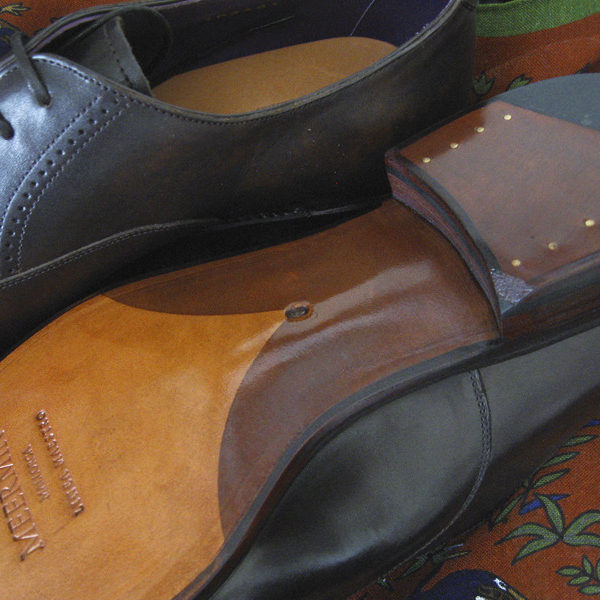 Top-end manufacturers such Hermes’ John Lobb have long used Ilcea’s antiqued leathers for their products. The beautifully mottled, full-grain Italian calf leather has been made into shoes, belts, and wallets, and while the resulting products are very handsome, they’re also very expensive. Shoes can cost as much as $1,500, while accessories typically hover around $300.

Recently, Kent Wang and Meermin introduced their own line of Ilcea antiqued calf shoes, but at a lower price point. Kent has four models, including the semi-brogue pictured above, while Meermin just finished a quarter-brogue specially made for certain StyleForum members.

Though both use materials from the same tannery, they’re very differently designed. Kent’s is a bit more aggressively styled with larger punch perforations and more apparent antiquing. His model also has an elongated toe box (which tapers to a soft square), a narrower waist, and a more angular silhouette. Meermin’s on the other hand, has more subtle antiquing and the last (here being the Hiro, though StyleForum members received the Olfe) is a classic round toe with a conservative sensibility. Meermin’s leather is also a bit shinier and polished, something like what you’d find on John Lobb’s antiqued calfs, while Kent’s is matte. I like the richer finish of Meermin’s, personally, but of both are handsome in their own right.

Both shoes are made in East Asia, but to high standards (Kent’s are produced in Laos and Taiwan, while Meermin’s are made in Shanghai, then finished in Spain). Kent’s are Goodyear welted and Meermin’s are handwelted. Both mean that the soles are easily replaceable, thus allowing these shoes to potentially last for decades if they’re well-taken care of. The soles are also channeled, which means that the stitching at the bottom is hidden, and there are brass nails at the soles’ toes and heels to help slow their wear. Nice little details, such as the slightly curved waist on Meermin’s and the more visibly shaped fiddleback on Kent’s, finish them off.

At the moment, Meermin’s model is not yet available. This quarter-brogue was made on special order only for certain StyleForum members. However, the company is working to introduce this antiqued leather to their ready-to-wear line. If they do, they’ll include the quarter-brogue you see above and a double monk. They may also have the leather available for their made-to-order (MTO) offering, which means you can have any of their shoes made from this material. I’m told that the price for the ready-to-wear shoes should be about $320 for US customers, while MTO will vary depending on what’s requested. I can honestly say I’ve never seen a more handsome shoe for ~$300, and I somewhat doubt I ever will.

Kent’s is a bit more expensive, with prices ranging from $450 to $525. However, his are available now and feature a bit more handwork, such as the fiddleback waist you see on the sole. It’s purely a stylistic detail, but a nice one, I think.

For those interested in Ilcea’s antiqued calf, but can’t afford these prices, check out Chester Mox. They use the leather for their wallets, and can specially make any of their models from this material upon special request. Prices aren’t cheap, but they’re a fraction of the ~$300 that John Lobb charges.